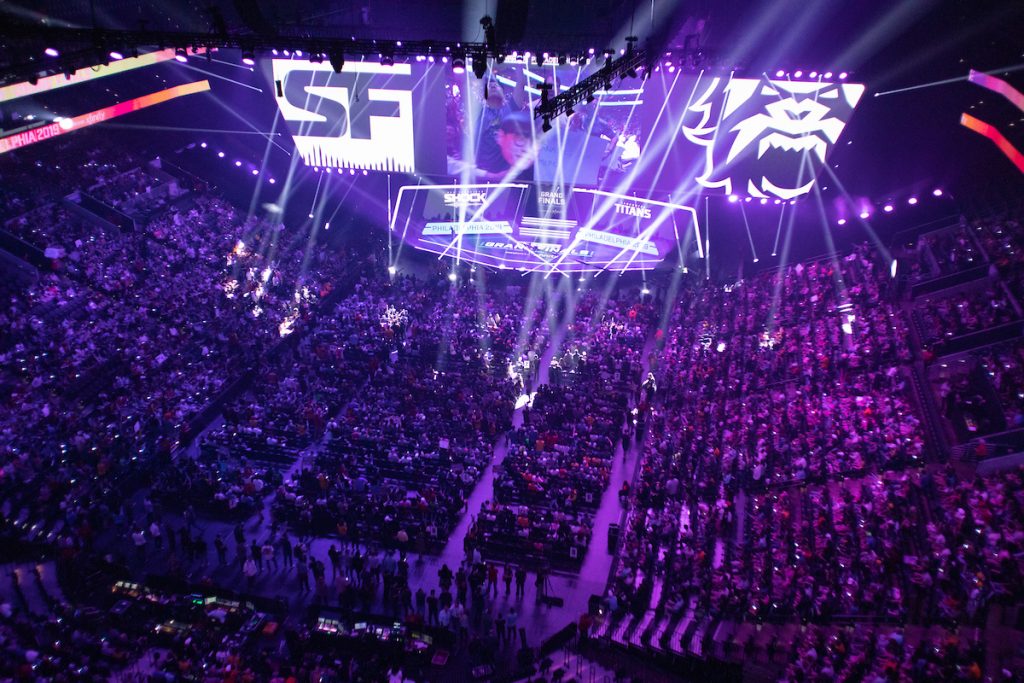 With their victory, Shock secured their place as the undisputed greatest OWL team to ever compete. (Photo courtesy Tonya McCahon for Blizzard Entertainment)

San Francisco Shock are your 2020 Overwatch League Season champions. The team defeated Seoul Dynasty in an exhilarating 4-2 Grand Finals series to earn their second season championship in a row and cement their legacy as the greatest Overwatch League team ever. After Saturday’s victory, Shock are unquestionably the best Overwatch team to ever grace the game and arguably one of the greatest esports teams to ever compete on the international stage. It’s hard to win a championship, it’s even harder to defend one. Shock came into this season on top and they finished on top; huge congratulations to SF Head Coach Dae-hee “Crusty” Park and his players!

THE GREATEST OVERWATCH TEAM OF ALL TIME pic.twitter.com/NnWy4YYtHw

“The 2020 season was difficult, due to Covid-19 and all the other factors,” explained Crusty in the post game interview. “We also won last year, so talking to our team and players I told them if we don’t defend this championship, we will regret it. As a team we had the mentality that we have to win this again and defend our name as a team.” 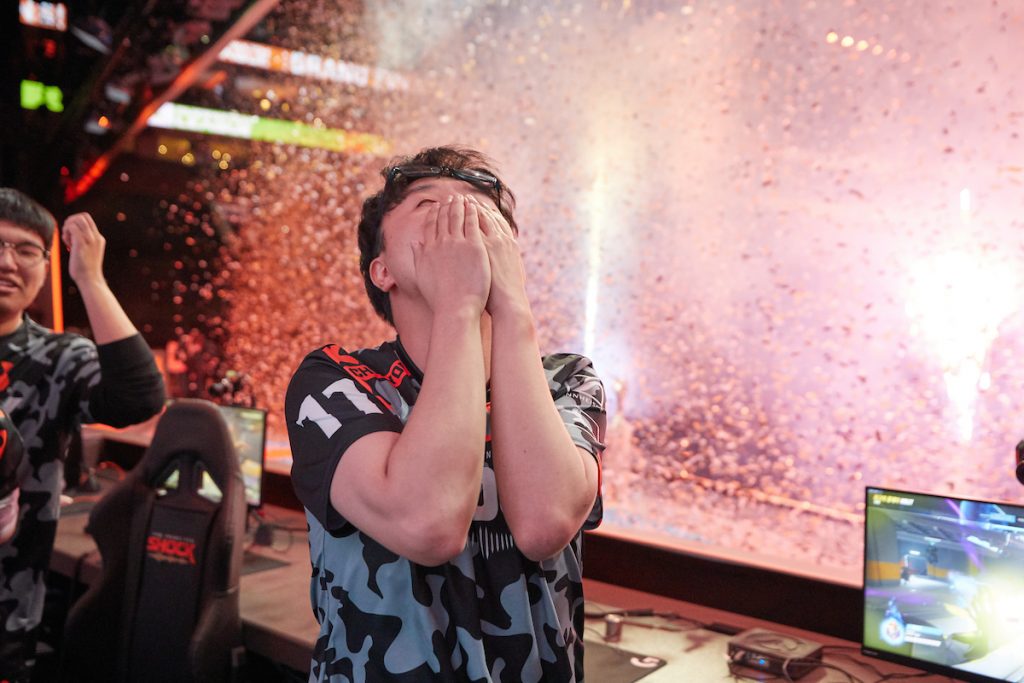 As for Seoul, although they lost the Grand Final match, they should be exceedingly proud of their playoff run. They were a dark horse candidate who somehow reached the Grand Final match, despite only being ranked 11th in regular season play. Not only did they compete in the Grand Finals against the odds, they also managed to pick up two maps against Shock, unlike Vancouver last year who were swept in the Grand Finals by San Francisco. Backed by their godlike Roadhog Jae-hee “Gesture” Hong, and legendary main DPS Joon-yeong “Profit” Park, Seoul gave Shock a legitimate run for their money. 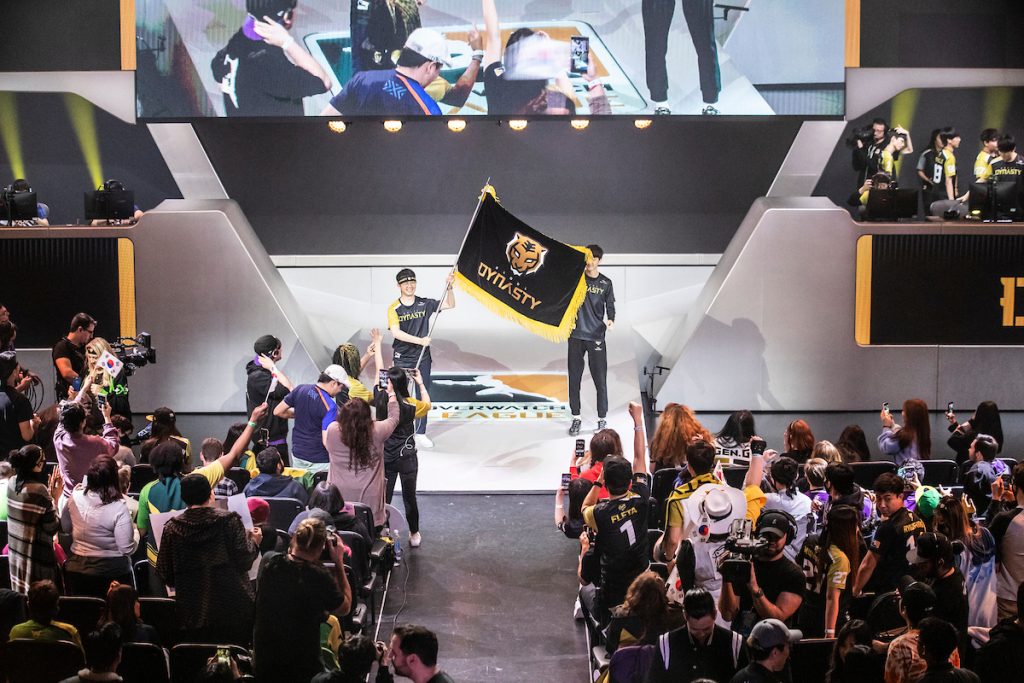 Dynasty also cracked the Grand Finals meta with their Seoul Special Roadhog/Sigma comp, which means that Shock ended up winning the 2020 trophy while using a strategy invented by the Korean team. Huge congratulations to the Seoul Dynasty for an incredible playoff run; we can look forward to great things from them in the future.

The Shock’s journey to the championship

A huge aspect of success for all Overwatch League teams this year was their ability to adapt to constantly changing circumstances and metas. Teams were forced to adapt to homestands, then online play, then regional tournament play, and of course they also had to deal with many balance-driven meta changes along the way too.

The metas seen throughout this season included an Orisa/Mei centric bunker meta, a Genji/Winston dive meta, a Orisa/Sigma double shield meta, a Sombra/Hammond dive meta, and finally concluded with an Roadhog/Sigma meta which emphasized individual prowess as well as team coordination. Those metas don’t even include the weekly hero rotations that altered the week-to-week meta throughout the regular season. With so many playstyles to adapt to, 2020 became a grueling marathon that tested the mental and strategic fortitude of every OWL team. On top of all of that, these teams have also had to deal with a pandemic, so in many ways this championship is very special for Shock.

Shock started off this season competing online against other teams located on the west coast or in close enough proximity that ping would not be a huge issue for the matches. Thus they ended up facing Valiant, Gladiators, and Fuel throughout the early part of the season, though eventually they were able to compete with all the teams across North America. In the first week of online competition, Shock lost to both Valiant and Gladiators. It was a low point for the team, as this was the last time they would lose in the regular season until their loss to Fusion in the final week of the season.

In April, Jay “sinatraa” Won retired from Overwatch to play VALORANT. You would think this was a huge blow to Shock, since Sinatraa was the League MVP in 2019 and a key part of their DPS lineup. His departure, however, didn’t even mildly phase the team. Shock were able to rely on their masterful rookie sniper Seonchang “ANS” Lee alongside Dong-jun “Rascal” Kim and Nam-joo “Striker” Kwon, all of whom are some of the best DPS players in the world.

During the summer, Shock competed in three NA regional tournaments. They won the May Melee and the Countdown cup, and reached semifinals in the Summer Showdown where they lost to Paris Eternal in a surprise upset. Nonetheless, these strong showing confirmed that Shock were indeed the best in NA, even if they weren’t untouchable. However, the question remained: are they the best in the world? During this same time period, Shanghai Dragons were stomping their competition in APAC, winning two the APAC regional tournament. On top of that, APAC as a whole looked really promising heading into the 2020 season playoffs, where we finally would discover which region is better.

The Playoffs and winning that Grand Finals

Shock were able to roll through the winners bracket of the NA playoffs with relative ease, qualifying for the Grand Finals weekend. The Grand Finals were set to be hosted online in Korea, so there wouldn’t be any ping issues. After qualifying, the team got on a plane and flew to South Korea where they had to quarantine in hotel rooms for two weeks.

During the Grand Finals weekend, we finally got to see Shock in action against APAC teams. They only barely defeated Seoul Dynasty on Thursday of the Grand Finals weekend, but a win is a win. In the winners bracket finals, San Francisco rocked the Shanghai Dragons, finally answering the question of which region was stronger since Dragons were considered best in APAC. At this point the only thing standing between Shock and a back-to-back championship win was a rematch against Seoul in the Grand Finals, after Seoul advanced over the Dragons in the losers bracket final.

San Francisco started out the Grand Finals series strong, picking up the first two maps against Seoul. Striker’s ability to dominate control maps gave Shock a big advantage throughout the playoffs and the Grand Final match. They could more or less rely on picking up every control map, so the difference would be made on payload, hybrid, and 2 CP maps.

After half time, Seoul made some adjustments and managed to pick up the next two maps, carried on the back of stunning performances from Profit, Gesture, and Young-wan “Creative” Kim. Dynasty even won Shock’s map pick on Watchpoint Gibraltar after Profit pulled out his iconic Genji and Creative landed some insane anti-nades as Ana. Going into the final few maps, the Grand Finals looked like they could go either way.

In the end, Shock put on fantastic performances to close it out, picking up Busan and finally Hollywood to clinch their second consecutive title in a powerful display of technical teamwork and sheer individual skill. Minki “Viol2t” Park, Ans, and Hyo-bin “ChoiHyoBin” Choi stood out throughout the series, but the three excelled particularly on the final two maps. Ans secured a variety of opening kills on Busan, along with Striker. Violet took aggressive Zenyatta play to the next level, even taking an unconventional high ground on Hollywood to take out Seoul’s support line. And as usual, ChoiHyoBin, who won Grand Finals MVP in 2019, continued to serve as the cornerstone of this team’s tankline.

Seoul actually played very well throughout the Grand Final match. However, it turns out playing incredibly well isn’t enough to win a championship against the ferocious, unstoppable playoff juggernaut that is San Francisco Shock.

Although all of the Shock’s starting players deserved this award, in the end the Grand Finals MVP award, and the $100,000 USD cash prize that comes with it, went to Striker. Striker is known as the best Tracer in the world, but during the Grand Finals he truly carried his team with his top tier Hanzo. The Grand Finals meta was dominated by a unique double sniper DPS core which backed up a double off-tank frontline. Striker stepped up on Hanzo to back up Ans’ amazing Widowmaker. Together, the duo found the kills that would ultimately earn this victory.

CONGRATULATIONS TO NOT ONLY THE THE @TMOBILE MATCH MVP, BUT THE GRAND FINALS MVP @STRIKER_OW 🏆🏆 pic.twitter.com/KAsI84UWzd

“Getting this MVP in the grand finals has a special meaning to me,” Striker explained in an interview. “I thought Ans, Violet, or Super, might get it. But the fact that I was chosen is very special. I am very grateful and thankful.” 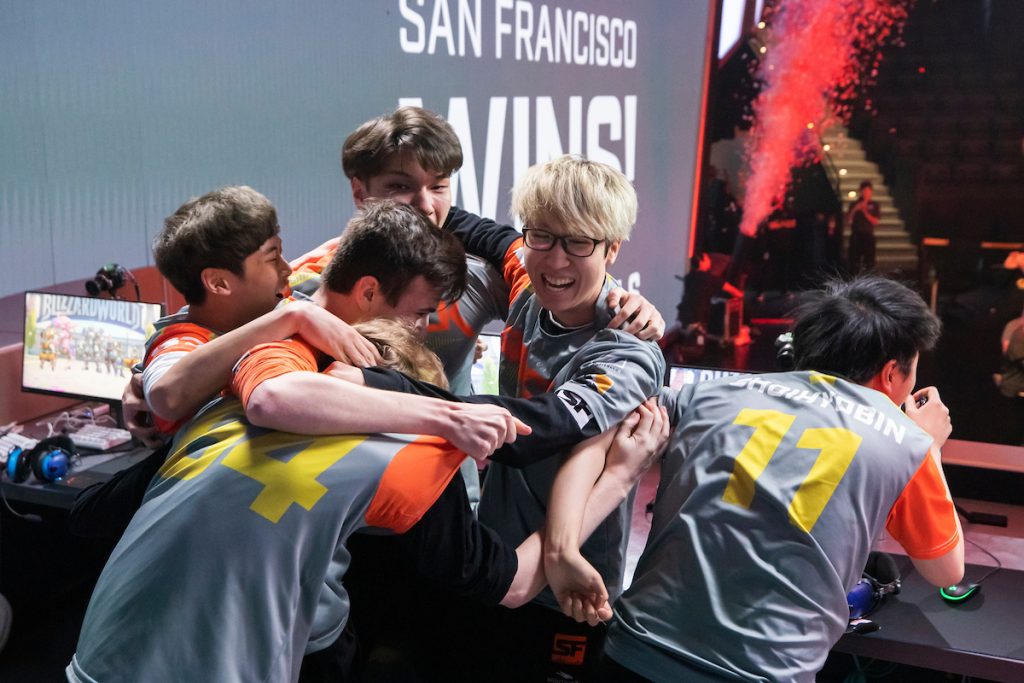 When asked what he would do with the 100k award, the MVP player responded, “As of right now, I don’t have anything planned for the money. But I think I am gonna buy my dad a car.”

As Striker indicated, every Shock player in the finals was crucial to this team’s success, but Striker was able to consistently secure control point maps for Shock during the series, which very clearly turned the match in San Francisco’s favor.

The 2020 season was a whirlwind of change, adaptation, and struggle for the Overwatch League, it’s teams, and it’s players. Every team deserves major props for sticking out the most difficult OWL season yet, but in the end Shock proved that they remain the best team in the world. Congratulations to the San Francisco Shock for winning the 2020 season championship and to Striker for winning the Grand Finals MVP award; y’all deserve it.