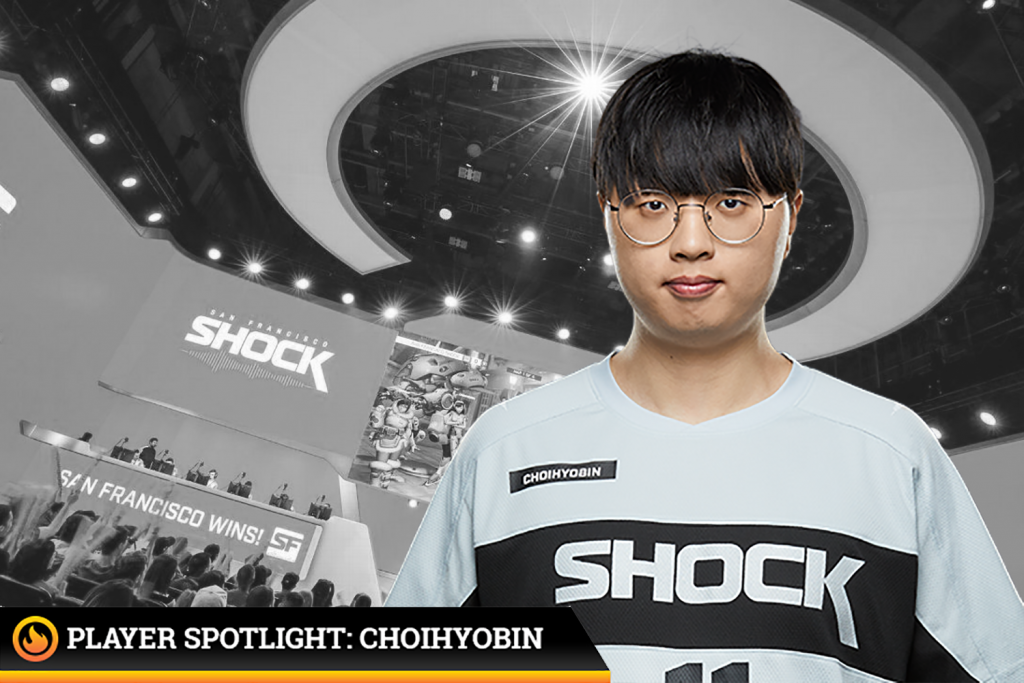 ChoiHyoBin has stood the test of time as one of the OWL’s best tanks.

“He’s probably the most selfless player on the team…he’ll do whatever you want him to do.” Those were the words Matthew “super” DeLisi used to describe his tank partner Hyobin “ChoiHyoBin” Choi on the heels of the San Francisco Shock’s coronation at the 2019 Grand Finals. OWL MVP Jay “sinatraa” Won called him “the best teammate I’ve ever had.” Even team owner Andy Miller derailed a completely unrelated question to gush: “Nobody would be here without Choi. That is the most clutch player in the league and he’s an unbelievable teammate.”

ChoiHyoBin, of course, had just been named Finals MVP after his masterful performance in the Shock’s 4-0 sweep over their rivals, the Vancouver Titans. So when he was asked to evaluate his own play during the series, how did he respond? “Even though I’m the one that received the MVP award, my teammates are the ones that put me in a position for me to be efficient,” said the ever-humble star. “So I’d really like to thank my teammates for that.”

Throughout his career, ChoiHyoBin has been a picture of reliability, the kind of foundational piece you can build around. He might not be the face of his team, the player who gets sent on late-night talk shows to promote the league, but he’s the one you trust in the biggest moments to keep his cool. He is Mr. Consistent.

ChoiHyoBin began his Overwatch career in Korea with X6-Gaming in early 2017. Renowned on the Korean ladder for his standout Roadhog play, he quickly established himself as an elite off-tank on multiple heroes.

Despite a roster that included future OWL players Kyeong Bo “GodsB” Kim, Heechang “BEBE” Yoon, and Da un “NoSmite” Jeong, X6 struggled to break into to the top tier of the Korean scene against entrenched teams like Lunatic-Hai and Kongdoo Panthera. Through two seasons of APEX, the team never got out of the second group stage, even as ChoiHyoBin grew into one of the best D.Va players in the game. “The D.Va players that confuse or frustrate their opponents are the ones that are playing the hero properly,” he said at the time.

They finally broke through at the end of 2017 at the Nexus Cup, a tournament pitting the best teams in Korea against top Chinese competition. By then, much of the old guard had moved on to the OWL, though ChoiHyoBin wouldn’t be too far behind them. After the Shock picked up his X6 teammate Minho “Architect” Park in March of 2018, they returned to the well to grab Choi at the beginning of Stage 3.

The Start of Something Special

While Architect slotted into the DPS role immediately, it wasn’t until Stage 4 that ChoiHyoBin finally got his shot. By that point, San Francisco’s season was already over, at least from the perspective of making the playoffs. Instead, the focus was on building something lasting, that would carry over into the following season. 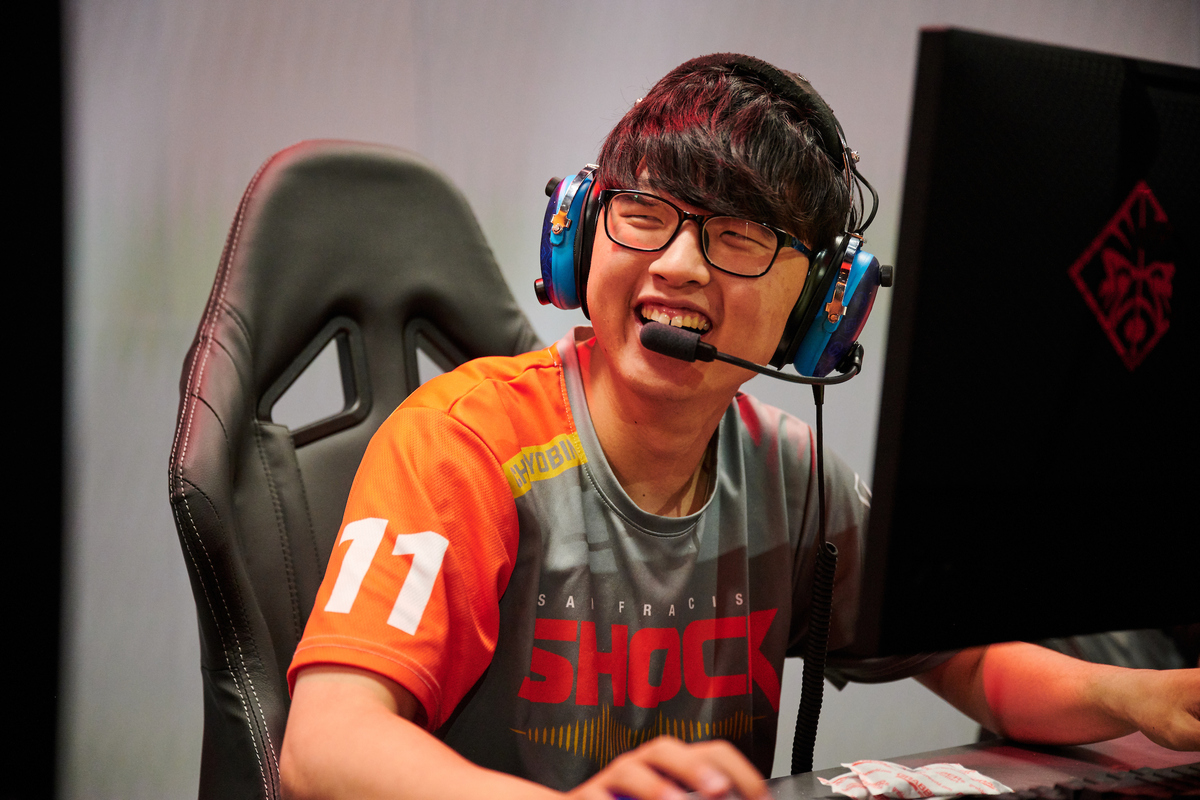 Shock Head Coach Daehee “Crusty” Park came into the picture at the beginning of Stage 4, just off the tail of leading Boston to the league’s first perfect stage record. With the Shock, he was inheriting a team with tremendous upside, built by former coach Brad “sephy” Rajani with the future in mind.

Between midseason pickups like Choi, Architect, and Grant “moth” Espe and raw talents like sinatraa and super, the Shock became a scary opponent over the back half of the season. They went from a league punching bag to a team with serious upset potential.

Stage 4 of the Inaugural season was a lesson in what it takes to be a truly elite team. In the eight matches that Choi played, San Francisco went 4-4. They were starting to easily dispatch the teams at their level, but time and again they fell just short against the top competition. Those four losses all came against the teams that would make the playoff semifinals at season’s end and three of the four were decided by one map. ChoiHyoBin and the Shock were starting to come into their own.

The Climb to the Top

Coming into 2019, the kid gloves were off for San Francisco. Offseason additions like NamJu “STRIKER” Gwon, DongJun “Rascal” Kim, and Minki “Viol2t” Park plugged any holes that remained in the roster, and expectations were rising. ChoiHyoBin was starting to grow into a superstar on the OWL stage, a D.Va player to match any in the league. By the time they made the Stage 1 Finals, no one could ignore the Shock anymore.

Though they couldn’t knock off the Vancouver Titans, the Shock pushed them to the limit, taking it all the way to seven maps in an all-time classic. For his part, ChoiHyoBin was a monster from start to finish. Nowhere was he more clutch than on Temple of Anubis, where he saved his team not once, but twice with clutch Self-Destructs. It was the start of a great rivalry, not only between the teams but between ChoiHyoBin and HyunWoo “JJANU” Choi for the title of best D.Va in the league.

From there it was off to the races for Choi and the Shock. They immediately embarked on their legendary Golden Stage 2, winning 28 straight maps on the way to a 7-0 stage record. Choi got his revenge against JJANU and the Titans in the epic Stage 2 Finals.

With a target on their backs (and maybe their foot off the gas after the perfect stage), the Shock flagged a little bit in Stage 3, dropping matches to the Outlaws and Hunters. Still, they fought their way to the Grand Finals, where the unconventional triple-DPS style of the Shanghai Dragons was waiting.

After falling down 0-3 in the best-of-7 series, the Shock fought their way back valiantly. ChoiHyoBin was crucial in the comeback, breaking out his old favorite Roadhog to help contain the myriad threats on the side of the Dragons. San Francisco couldn’t quite finish the reverse sweep, but again the loss would spur them to new heights.

They proceeded to tear through the competition in Stage 4, again going 7-0 and securing the third seed in the playoffs. That would pit them against the Atlanta Reign in the opening round of the double-elimination playoffs.

For the first time in his OWL career, ChoiHyoBin seemed unprepared. He struggled to pick up Overwatch’s newest hero Sigma, getting completely outclassed by Blake “Gator” Scott. In the crucial moment, Choi’s Gravitic Flux lifted him off the cart right as Myeong Hwan “smurf” Yoo was eliminated, giving the Reign just enough time to finish the final map.

The rest is history. The Shock wouldn’t lose another map the rest of the way. Four straight dominant 4-0 wins carried them to the Grand Finals where they put a bow on their rivalry with the Titans in emphatic fashion. They swept Vancouver 4-0 and left no doubt that they were the best team in the league. ChoiHyoBin was named Finals MVP, and his team showered in praise. 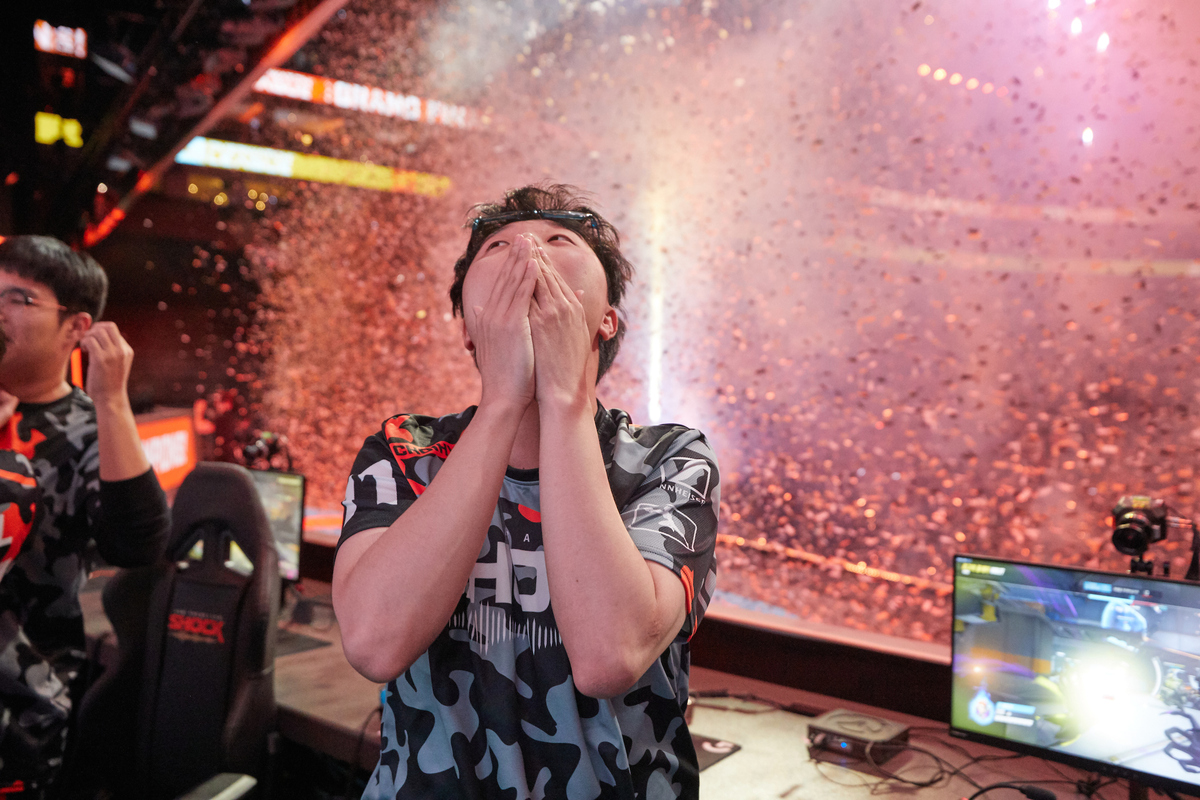 Much of that incredible run came from Choi’s improvement on Sigma throughout the playoffs. While he started slow, he became the best Sigma in the league by the time the Grand Finals rolled around. In the Grand Finals, he was everywhere, making the most of Sigma’s kit with clutch Accretions and Kinetic Grasps that saved teammates time and again.

It’s indicative of everything ChoiHyoBin brings to a team. If he isn’t up to par at something, you can rest assured that he will put in the work to get there. He adapts quickly to anything thrown at him, and always puts the team first.

This year, Choi and the Shock have picked up right where they left off, for the most part. Since losing their first two online matches back in Week 8, they’ve hardly missed a beat. They haven’t lost a single regular season match since and added the May Melee title to their trophy case.

ChoiHyoBin has been his usual rock steady self, settling into his role as the most consistent off-tank in the league. Even in this chaotic season, with plans constantly changing and the Shock roster seeing some significant shuffling, Choi has been the constant.

Thanks to Hero Pools, his ability to play every off-tank at a high level has been invaluable. Where many of the former D.Va specialists have fallen off with nerfs to Defense Matrix and the introduction of Sigma, ChoiHyoBin has stood tall. That consistency across heroes means it’s rare to see the Shock without him in the lineup, even as they’ve experimented this season.

Sigma has become one of the most crucial heroes in the current meta, thanks to his synergy with picks like Orisa and Ashe. As his duties have evolved, ChoiHyoBin has stepped up to the plate, taking brilliant off-angles and putting out tremendous damage numbers consistently. He leads the league in Final Blows and Eliminations on Sigma.

Even after a startling semifinal exit in the Summer Showdown, the Shock have firmly solidified their place at the head of the pack in North America. That loss to the Paris Eternal cost the Shock their streak of making every Grand Finals since the start of 2019.

Every other time they’ve lost, San Francisco have bounced back with force, so expecting anything less now seems foolish. ChoiHyoBin and his quiet excellence are a big reason why. He’s a leader within the team, someone capable of keeping teammates focused on the task at hand and pushing everyone forward. If a player of his caliber can put in the work to improve, no one has an excuse. 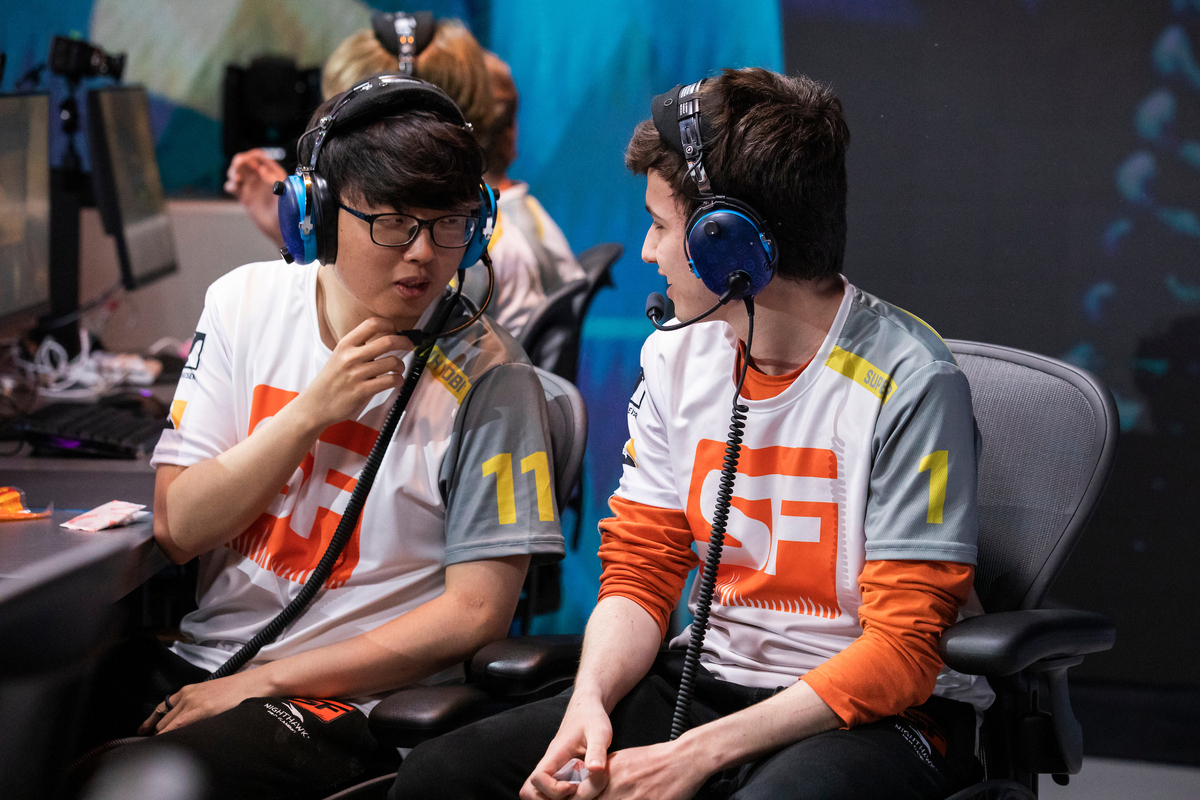 The Shock have cemented themselves as the league’s first dynasty with ChoiHyoBin serving as one of the cornerstones. He’s everything you could ever want in a star – mechanically gifted, highly motivated, and a teammate through and through. Crusty may be the one at the helm, but Choi sets the tone for this team, even if sometimes you can barely hear it.