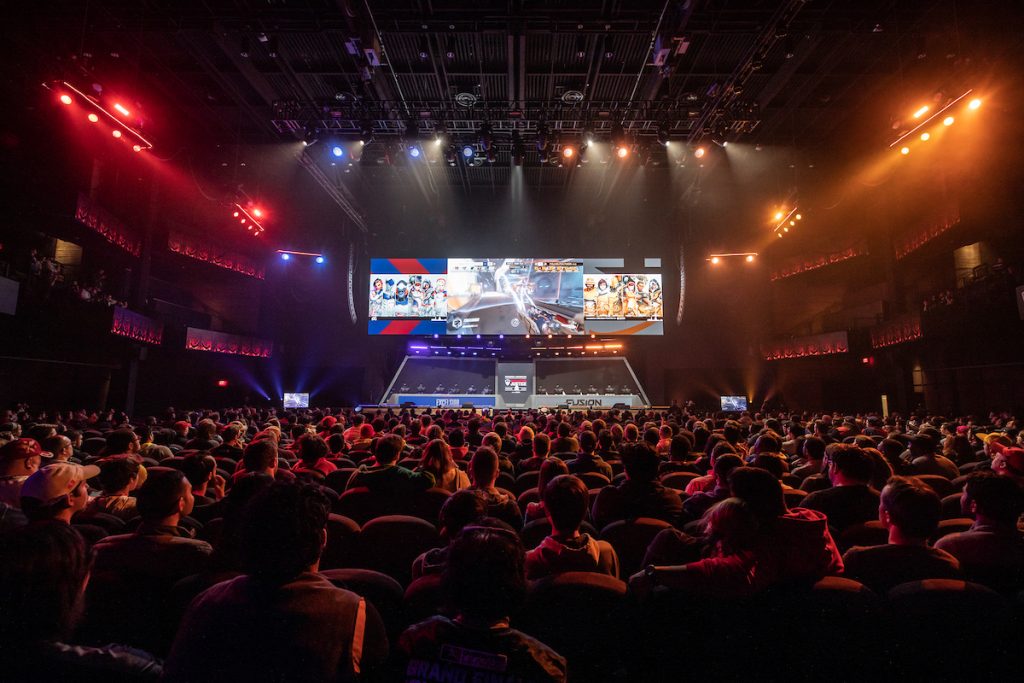 Shock earned their spot in the Grand Finals via the winners bracket, while the Dynasty earned their way through the loser's bracket (Photo via Robert Paul | Blizzard Entertainment)

The Overwatch League Grand Finals weekend continued with three matches on Friday. First, San Francisco secured their slot in Saturday’s Grand Final match by defeating the Shanghai Dragons in the winner’s bracket final. Then, we witnessed Seoul effortlessly eliminating Philadelphia in the losers bracket semifinal. Finally, Seoul defied everyone’s predictions and pulled off a legendary upset over top-ranked Shanghai in the losers bracket final to advance to the Grand Final championship match on Saturday.

While you were sleeping the #1 Overwatch team in NA battled the #1 Team from APAC!

Get caught up and get ready for the Grand Finals Championship match in exactly 24 hours! #WINNABLE

The match between Shanghai and San Francisco was a long-anticipated pairing since Shock are widely considered the best in the North American region and Shanghai were the top-ranked team in the Asian Pacific region. Coming into this match, there were a lot of questions about how the two regions would stack up against each other. These questions were further magnified after Shanghai dominated Philly on Thursday. However, Dragons didn’t look impressive at all against Shock.

The close scoreline of this match doesn’t accurately reflect how dominant the Shock performance really was. Led by Nam-joo “Striker” Kwon’s unstoppable DPS plays on Tracer and Hanzo, San Francisco more or less rolled over Shanghai on the first two maps. Going into the second half, they had three match points in a row to secure their Grand Finals slot. Dragons made strong adjustments in the second half and managed to pull together two maps in a row to set up the possibility of a reverse sweep. However, even when Dragons won those two maps they didn’t look impressive at all. On the final map, Shanghai made a number of strategic errors which the Shock were able to capitalize on, but even without the missteps San Francisco’s players just outperformed Shanghai’s players.

Throughout the series, both Myeong-hwan “smurf” Yoo and Matthew “Super” Delisi played Roadhog at various times, with both players finding success on the hero. Shanghai, on the other hand, struggled to even keep their Roadhog, played by Ji-won “Stand1” Seo, alive. Whenever Stand1 showed his face on the frontline, San Francisco focus-fired him and he did not hold up to the pressure very well. It will be interesting to see how Smurf and Super stack up against Seoul’s Roadhog player, Jae-hee “Gesture” Hong.

This match was lost by Dragons just as much as it was won by Shock. Dragons started the first map of the series playing Winston dive, with Eui-Seok “Fearless” Lee on Winston and Jae-won “LIP” Lee on Sombra. It was clear Dragons wanted to play the Winston Dive throughout the match, as they did in the APAC playoffs. However, that strategy is just not the Grand Finals playoff meta and is countered pretty directly by the Seoul Special which Shock were running. After the first map, Dragons were forced to adapt, but they found very little success even after switching to a more meta composition.

Seoul continued their unlikely playoff run on Friday, sweeping the Philadelphia Fusion in a 3-0 result to advance to the loser’s bracket finals. Coming into the Grand Finals weekend, most analysts wrote Seoul off as the worst of the four teams, after all the team ended the regular season ranked in the bottom half of all OWL teams. However, on Friday they proved to be a dangerous and worthy opponent who is far better than their regular season ranking.

GGs @fusion! We’ll be moving onto our next #OWL2020 Grand Finals match against @ShanghaiDragons, which will begin shortly! Send the team some good vibes as they get one step closer to the #OWL2020 Championship! #TigerNation pic.twitter.com/dEhdD7mIlh

Dynasty have relied on the Seoul Special to carry them throughout these playoffs. The composition, which they invented, is made up of a Roadhog/Sigma or Roadhog/Hammond tankline, Mercy/Ana support line, and usually two snipers though there are significant exceptions to that DPS line. Although Seoul isn’t able to flex to another style like some of the other teams competing in the Grand Finals weekend, their strategy is so good that it doesn’t matter.

The Dynasty’s play style throughout the playoffs has relied on the individual talents of Joon-yeong “Profit” Park, Dong-eon “FITS” Kim, and Gesture. Profit has been on top of his game during the playoffs, reminding us why he won the OWL grand finals MVP award when Spitfire won the OWL championship back in 2018. Profit is so incredibly deadly on any hero he picks, that he actively changes how other enemy teams are allowed to play the game.

Although the defeat stings, Fusion still had a great regular season that they can be proud of. They only lost two matches all year and looked really good, no matter the meta. They just couldn’t seem to crack this playoff meta. Even when they tried to mirror the Seoul Special, Dynasty played it better. Philly ended up leaving the Grand Finals weekend without winning even a single map. Once again, Fusion found themselves in an excellent postseason position, only to throw it all away with disappointing playoff performances

Dynasty Pulls off Upset Over Dragons

In a match that started only 20 minutes after they had eliminated Fusion, Seoul managed to pull off an unprecedented upset over Shanghai in the loser’s bracket finals. They defeated the Dragons in a very close 3-2 match. The entire series went back and forth between the two teams, culminating in a high-pressure final map on Oasis. In the end, they were able to clutch out the win on the back of Profit’s amazing DPS plays and earn their very unlikely place in the Grand Final match against the San Francisco Shock on Saturday.

Ladies and gentlemen, you’re watching history in the making! For the first time ever, #SeoulDynasty will be moving forward to the Grand Finals. We’ll be taking on @SFshock for the #OWL2020 Championship tomorrow at 10PM KST so we hope to see you then!#TigerNation pic.twitter.com/lRtnVSWbRS

During 2020, Seoul and Shanghai developed a bit of a regional rivalry. Shanghai narrowly outclassed Seoul in the May Melee finals, reverse sweeping Dynasty in a heartbreaking 3-4 loss for the Korean team. More recently, Dragons sent Seoul to the losers bracket in the APAC playoffs a couple of weeks ago. So coming into this match, Dragons were a very clear favorite, based on just the past meetings between these teams. However, on Friday it was Dynasty who came out on top.

Seoul continued to use the ultra-aggressive flanking style that they displayed against Fusion earlier on Friday. Gesture’s wild flanks were punished more often by Dragons, but the strategy still continued to work surprisingly well. The biggest credit for this victory has to go to Profit. The man refuses to lose. Even when all seems lost, you can never count out Dynasty so long as Profit is on the field. The legendary player flexed between Ashe, Pharah, Hanzo, and Tracer throughout the match, always figuring out exactly what Dynasty needed to stay ahead.

Individual skill wasn’t the only advantage that Seoul had over Shanghai either. Seoul also displayed superior team coordination. While Shanghai didn’t have bad teamwork by any means, Seoul’s teamwork was outstanding. For example, it was impressive to see how Young-wan “Creative” Kim and Gesture worked together to maximize Ana’s ultimate. There were times when Gesture let himself be hooked by Stand1, only to have Creative give him the Ana boost to win the Roadhog duel. Seoul also seemed to be a step ahead of Shanghai when it came to tracking and countering enemy ultimates. They were never caught off guard by Shanghai’s ultimates, whereas Shanghai was wiped by Seoul’s ultimates on multiple occasions. In the end, the victory can be credited to a combination of excellent teamwork and incredible individual prowess on the part of the Seoul Dynasty.

Despite incredible performances coming out from Diem on Widowmaker and Jae-gon “LeeJaeGon” Lee on Mercy, Shanghai came up short of victory in both of their matches on Friday. They weren’t just outplayed, they were out strategized. For example, in two of the three maps they lost to Seoul, Dragons insisted on playing a Sombra and no Roadhog, repeating the mistake they made against Shock earlier that day. They simply weren’t strategically prepared to win this weekend. Most teams would be happy with a third place season finish. But for a powerhouse like Shanghai, third place is nothing but a bitter disappointment to end an otherwise dominant year.

The 2020 Grand Finals Championship match is scheduled to take place on Saturday morning starting at 5:30 AM PDT. Will Shock repeat their 2019 championship performance, or will Seoul rise to the challenge and claim their first OWL title? Tune in on Saturday to find out!