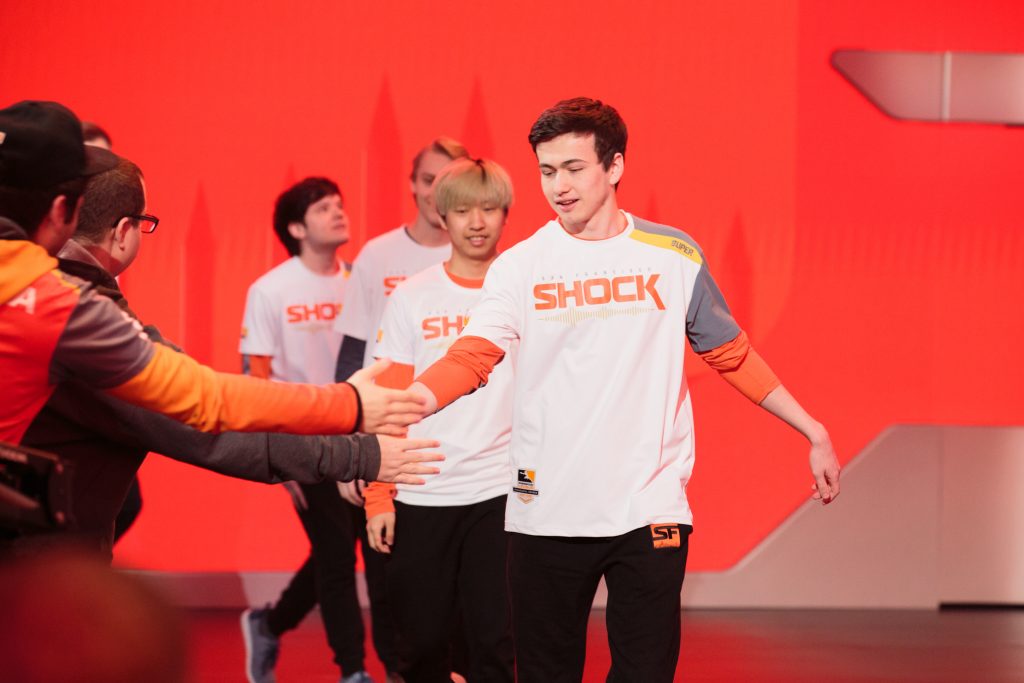 The Shock reaffirmed that they are the best in NA, while the Mayhem emerged as a new contender to watch. (Photo courtesy Robert Paul - Blizzard)

The May Melee Tournament featured the top 12 teams in the North American division, with the top four teams receiving a bye directly into the quarterfinal round. On Friday, the Knockout rounds determined which teams would advance into the bracket and the top seeds in the tournament were able to select their opponents from the teams who advanced to Saturday’s main bracket.

The #1 seeded San Francisco Shock unsurprisingly advanced to the Grand Finals, however the #2 seeded Florida Mayhem were a bit of a surprise to see reach the Grand Final match. Although the Florida Mayhem qualified really well for this tournament, they played against sub par teams throughout the three week qualifier period. During the May Melee tournament we really got to see just how great the Mayhem can play against better teams like the Philadelphia Fusion, the Atlanta Reign, and of course the SF Shock.

The Shock defeated the Florida Mayhem in the Grand Final match in a 4-2 series, claiming the 2020 NA May Melee tournament title.

WE ARE THE MAY MELEE NORTH AMERICAN CHAMPIONS!

RT AND PUT A #WINNABLE IN THE REPLIES, WE ARE GIVING AWAY 50 CODES FOR 100 OWL TOKENS!!!! pic.twitter.com/MNuXoqUMhr

As the reigning OWL champions, the Shock are considered one of the best teams in the league. They took the top qualification seed for the May Melee and have looked really good this year, with the exception of week 8 when they lost to the L.A. Gladiators and the L.A. Valiant. They looked predictably strong throughout this weekend’s tournament, showing exactly why they are the 2019 OWL champions.

Although the Shock have been doing well this season, they recently lost Jay “Sinatraa” Won and Park “Architect” Min-ho. With the loss of two incredible DPS players, there was some concern about how well their damage core would perform. Any of those concerns were put to rest. Seon Chang “ANS” Lee and Dong-jun “Rascal” Kim looked more than capable of heading up the Shock DPS. ANS in particular played a dominant widowmaker throughout their three matches on Saturday and Sunday.

The San Francisco Shock had a relatively easy road to finals. In Quarter-Finals they faced the Dallas Fuel, a team they have defeated on multiple occasions this year. The Dallas Fuel have looked decent over the past month, but they are still nowhere near a SF Shock caliber team. The Dallas Fuel defeated the Houston Outlaws on Friday to advance to Quarter-Finals, but their fate was sealed the second the Shock selected them as their Quarter-Final opponent. The Shock won their series against Dallas 3-1.

In the Semi-Finals, the Shock faced the Valiant. Coming into the match, the Shock versus Valiant season record was 2-1. The Valiant secured the #4 seed and have been playing well recently, led by their top fragging DPS Kyle “KSF” Frandanisa. The Valiant won their Quarter-Final match against the formidable Paris Eternal, so there was some hope they might be able to give the Shock a run for their money. However, the Valiant did not look strong in Sunday’s match against the Shock. San Francisco swept the Valiant to secure their spot in the Grand Finals.

The Florida Mayhem have experienced a meteoric rise over the past month. Florida started off Season 3 with a disappointing 2-4 record. Florida is now sitting on a 9-4 record and managed to secure the #2 seed for the May Melee, partly due to qualifying against particularly low-rank teams.

Despite their impressive record over the past several weeks, many analysts, including desk analyst Jonathan “Reinforce” Larsson, thought Florida’s good record was a fluke. The Mayhem came into the tournament intent on proving those doubters wrong. Throughout the May Melee Florida showed that they are indeed a top contender, defeating the highly regarded Atlanta Reign and the #3 seeded Philadelphia Fusion to secure their spot in the Grand Finals.

In their Semi-Final match against the Philadelphia Fusion, Florida came in as the clear underdog. The Fusion have played top-tier Overwatch all year and Jae-hyeok “Carpe” Lee is a pretty clear front runner for OWL MVP at the moment. The Fusion is currently the top ranked NA team in the standings, so most people were expecting the Fusion to defeat the Mayhem. However, these facts did not deter the Mayhem, who ended up routing the Fusion in a 3-1 blitz.

Throughout the tournament, Florida’s DPS players Sang-bum “BQB” Lee and Jun-ki “Yaki” Kim absolutely popped off. Yaki in particular came up with crucial kills throughout their matches. The Mayhem offtank Beom-jun “Gargoyle” Lee also might be the best Sigma in the Overwatch League. If there is one big takeaway from the May Melee, it’s that this Florida Mayhem roster is a threat, even against the best teams in the Overwatch League.

The Shock defeated the Mayhem in a 4-2 Grand Final series on Sunday. The victory secured the NA May Melee Championship for the Shock, and demonstrated that they are still the top dog in North America. Like the match before, the Mayhem came into the Grand Finals as the clear underdog.

San Francisco Shock are highly organized and make very few mistakes. The Mayhem’s playstyle during this tournament was very reactionary and focused on capitalizing on enemy mistakes in positioning. For example, during their match against the Fusion, the Mayhem trapped the Fusion supports in an enclosed room in Watchpoint Gibraltar. The move won them the team fight and ultimately helped them secure the series over the Fusion. The Shock’s error-free play made it very difficult for the Mayhem to execute these sorts of maneuvers.

The Shock looked incredible on all of their map picks, it was very clear that they had practiced and drilled those map strategies thoroughly. To their credit, the Mayhem also looked strong on their map picks. At the half, the score was tied up 2-2, and things were looking good for the Mayhem. However, San Francisco’s relentless pressure and top level execution proved too much for Florida to handle on the following map.

Minki “Viol2t” Park was named the player of the match for the Grand Finals. He made huge team contributions in the Grand Final match and throughout the rest of the tournament as well. Violet primarily played as Baptiste this weekend, making massive plays with his immortality field and amplification matrix’s alike. The Shock’s incredible support core has long been a cornerstone to their success, and this weekend was no different.

Even in defeat, Florida is a winner here. The Mayhem defied everyone’s expectations by winning any matches, much less competing in the Grand Final match. The Mayhem dramatically improved their OWL reputation with this runner up performance. On Saturday and Sunday, they played high level Overwatch and defeated multiple well respected teams. Even in their match against the Shock, they held their own, picking up two maps against the stacked Shock roster. Florida should be nothing short of proud of themselves.