How the Paris Eternal Claimed the OWL Throne 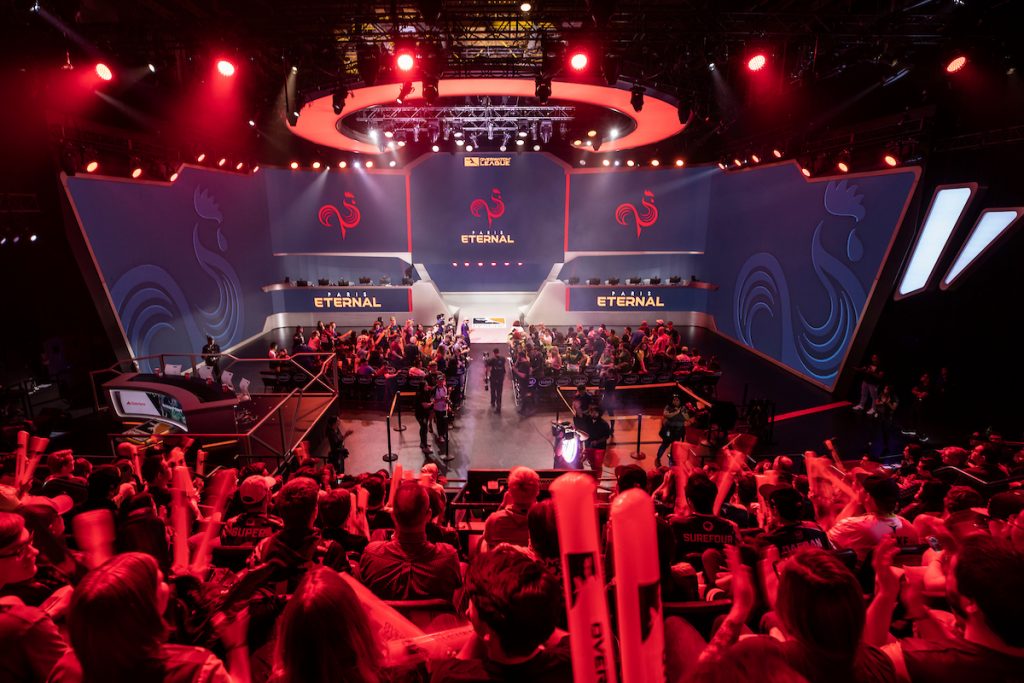 How the Paris Eternal dethroned the Shock and claimed the Summer Showdown title over the Fusion, all in just a few hours. (Photo courtesy Robert Paul - Blizzard)

The Paris Eternal shocked the world in July’s Summer Showdown tournament, defeating both the Philadelphia Fusion and the San Francisco Shock to claim the Summer Showdown title. Although the Eternal were considered a good team, very few expected them to be in Grand Finals, much less to win it all. The Eternal’s run through the bracket and victory in the Grand Finals was one of the most impressive Cinderella stories ever witnessed in the Overwatch League, or perhaps any esport.

A Season of Unrest

Like many Overwatch League teams, the Paris Eternal had a tumultuous season three in the Overwatch League. Not only was the team forced to spend much of the season playing from New Jersey due to COVID-19, a punishment very few deserve, they also saw a significant number of players leave their roster throughout the season. Specifically, the Eternal lost three separate support players over the course of April and May.

Damien “HyP” Souville retired from Overwatch in April. At the time he cited health issues, but he has since been signed by Ninjas in Pyjamas to play VALORANT, so make of that what you will. Harrison “Kruise” Pond was transferred to the Toronto Defiant in early May. Finally, Luis “Greyy” Perestrelo retired from Overwatch on May 12th, 2020.

The Paris Eternal brought on Korean support player Joon “Fielder” Kwon in May, who teamed up with Brice “FDGoD” Monscavoir to complete the Eternal support core. Since joining the Eternal, Fielder has continued to play from Korea due to travel complications once again relating to COVID-19. Despite the odd hours and high ping, Fielder has managed to consistently perform his job, even with precision focused heroes like Ana.

Throughout the season, the team has continued to push through adversity and show improvements every week. Paris managed to secure the fifth seed for the May Melee Tournament, but they were eliminated from that tournament in the Quarterfinals. They came to the Summer Showdown determined to improve on their May Melee placement.

Paris fielded five rookies in their Summer Showdown qualification and tournament matches. The rookies on this soon to be championship roster included:

The young lineup, combined with some veterans like Benjamin “BenBest” Dieulafait and Da-un “NoSmite” Jeong, came into the tournament hungry to prove what they are capable of.

The first glimpse of Paris’ championship potential came in the third week of Summer Showdown qualifiers, when the Hero Pools were removed and the Genji changes were active. In the patch leading up to the tournament, Genji had his shuriken damage increased slightly and the spread on his secondary fire reduced.

The result was that Genji rocketed back to the top of the meta. Not only could Genji farm his Ult more quickly, he was also a much more effective damage dealer. Throughout the final week of qualification it quickly became clear that the fate of the Summer Showdown rested on the shoulders of every team’s Genji.

Luckily for the Eternal, they had just the player for that: SP9RK1E. The Eternal signed him at the end of May, in the lead up to the Summer Showdown. During the last week of qualification, his Genji stood out immediately. He showed exceptional mechanical mastery of the hero, and more importantly showed that his blades and consistent damage output could be clutch fights for Paris.

Coming into the Summer Showdown meta, Paris finally had their shot at a title on the back of SP9RK1E’s Genji. All they had to do now was play flawlessly in the tournament. Easy right?

Paris entered the Summer Showdown as the eighth seed out of 13 total teams. Despite their relatively low seed, in the lead up to the tournament Overwatch desk analyst Jonathan “Reinforce” Larson named Paris as his dark horse candidate for winning the tournament. This claim seemed outlandish at the time, but little did we know just how perceptive Reinforce’s prediction was.

The Dallas Fuel were the first domino to fall to Paris, with the Fuel Losing in 1-3 series during Friday’s knockout round. The Eternal ended up being the only high seed to win their knockout match on July 3rd, with the Mayhem, Valiant, and Gladiators all falling to lower ranked teams.

In the quarterfinals, the Eternal defeated the fourth seeded Vancouver Titans. The Titans were the higher seed, however Paris was nonetheless considered the favorite since the Titan’s current roster is made up of all rookie players and coaches. The Titan’s didn’t play poorly, but they did not play well enough to defeat the surging Eternal roster.

Dethroning the Shock in Semifinals

In the semifinals, Paris faced the final boss of the NA division: the San Francisco Shock. This was where the road was supposed to end for Paris. It is difficult to put into words how much of a favorite the San Francisco Shock were for winning this tournament. Not only did the Shock win the OWL Season 2 Championship, they have also been head and shoulders above every other team in Season three, winning the May Melee tournament and generally looking untouchable.

How is an eighth seed supposed to defeat an unchallenged number one seed who hasn’t lost a match in 14 weeks? Against the odds, however, the Eternal played a near perfect match and managed to defeat the Shock in a ridiculously close 3-2 match. The series had everything: Huge Ultimate combos, incredible mechanical plays, close rounds, and of course some classic OWL technical difficulties. It was quite possibly the greatest OWL match ever played and I highly recommend you watch it if you haven’t yet.

Throughout the match, Benbest showed off impressive tank flexibility, demonstrating once and for all that he is not a Reinhardt one trick. Xzi consistently made game changing plays, including eliminating his counterpart on the Shock, Seonchang “ANS” Lee, in several notable encounters.

Further, in a rare strategic misstep, the Shock refused to buy into the Genji meta. Although they occasionally put in Dong-jun “Rascal” Kim on the Genji during the series, they preferred playing Nam-joo “Striker” Kwon on the Tracer with ANS on hitscan. This was probably a mistake, considering how dominant Genji players were throughout the weekend.

However, the biggest difference maker, and player of the match, was SP9RK1E. During the series, SP9RK1E put on a record breaking Genji performance. He averaged an astonishing 23 eliminations per 10 minutes and shattered the record for final blows in a signal map under 12 minutes on King’s Row. He clutched fight after fight for the Eternal. Then, in the final teamfight when all seemed lost for the Eternal, SP9RK1E pulled out his Genji blade and killed four people to win the series.

The Eternal had done it, they toppled the Shock’s throne and earned their own opportunity to fight for the crown.

Claiming the Crown in Grand Finals

After the grueling marathon against the Shock in semifinals, the Paris Eternal found themselves facing their league rival in the Grand Finals: The Philadelphia Fusion.

The Fusion, led by their star DPS Jae-hyeok “Carpe” Lee, have proven to be incredibly difficult to defeat throughout OWL season three. The Fusion came into the match with a 15-2 record and the third seed. Both the Fusion and the Eternal entered this series with hopes of winning their first ever OWL title

In many ways this match was the culmination of the rivalry between these two teams. The Fusion and Eternal faced each other several times in the regular season. Every single series between these two teams during season three went to five maps, with the Fusion up 2-1 on the season coming into the Grand Finals. However, it was Paris who would outlast the Fusion in yet another marathon, taking the Grand Finals in a nail biting 4-3 contest.

The series started out really well for Paris. They won the Fusion’s initial map pick on Linjiang Tower in convincing fashion, including some stylish boops from FDgod, though a few of those boops were stolen by Hanbin in the kill feed. Winning the first map can sometimes be the difference between winning a close series and losing it.

The Fusion picked up their second map pick on King’s Row in a very close 4-3 result. After that, the teams continued to trade maps, until the series culminated in a winner takes all penultimate game on Paris’ map choice. They chose Rialto, a map they performed very well against the Shock on during the semifinals.

On Rialto, the Genji players on both teams put on top tier performances. Josh “Eqo” Corona and SP9RK1E both created highlight reel worthy plays for their respective teams. For his part, EQO very nearly clutched the entire match for the Fusion in round two on Rialto by winning a 1v5 encounter to secure the second point.

However, in the final map, it was actually Eternal hitscan DPS Xzi who made the difference and earned the title player of the match. During several encounters, Xzi picked up crucial kills and he masterfully used hitscan heroes like McCree and Widowmaker to shut down EQO’s deadly flanking Genji playstyle.

Xzi didn’t just coincidentally find success either, the Paris Eternal took unfavorable fights on Rialto, relying on Xzi to find huge kills off the flank, which he was able to do consistently. For example, on the Fusions final attack on Rialto, Paris held just before the first point in a very precarious position. However, Xzi managed to secure two consecutive headshots on Isaac “Boombox” Charles and Eqo from the flank, which flipped the team fight and ruined the Fusion’s momentum at a crucial moment.

Ultimately, the Fusion were able to take that point, on the back on EQO’s spectacular 1v5 clutch play, but the damage to their time bank was already done. Two minutes later, Paris was able to comfortably win the final teamfight and claim the Showdown crown, their first ever OWL title.

Throughout most of the tournament, it was SP9RK1E who led the way, but in the Grand Finals it was Xzi who dealt out the punishment, shut down the enemy Genji, and secured the victory for Eternal. This young Paris roster played nearly perfect during the Summer Showdown, both from a strategic and a mechanical perspective. The Eternal’s incredible underdog wins in both the Grand Finals and semifinals will no doubt go down in history as two of the greatest Overwatch tournament performances ever.