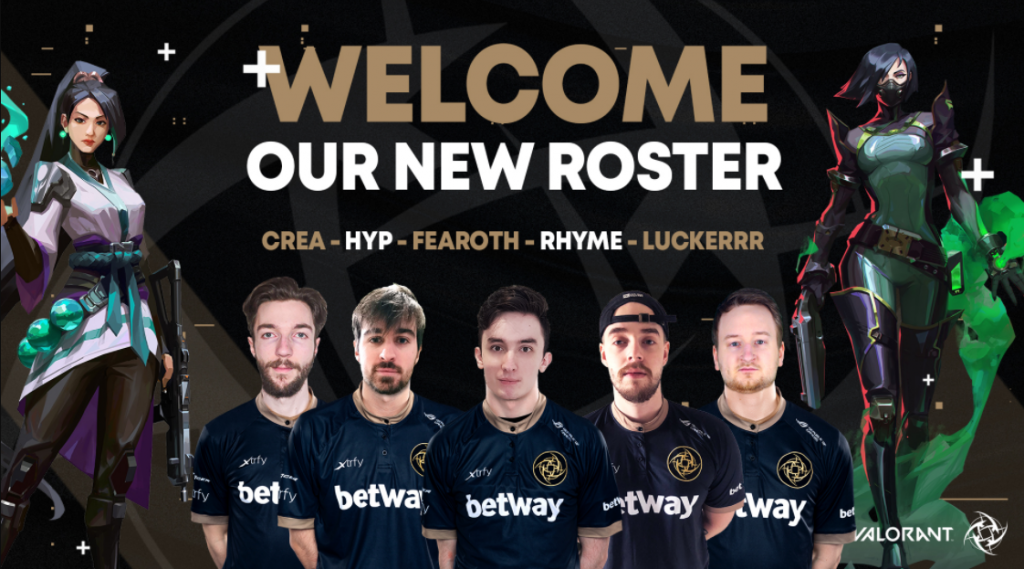 The new team does not include any of the Paladin's players who were announced in April for NIP's VALORANT roster. (Photo courtesy Ninjas in Pyjamas)

Ninjas in Pyjamas announced their full VALORANT lineup on Tuesday, headlined by former Overwatch professional Damien “HyP” Souville. In addition to HyP, the line up includes four former CS:GO players. Notably, the roster does not include any of the Paladin’s players who were originally announced for the NIP VALORANT team back in April.

Hyp, Fearoth, and CREA are all French players who were recently competing together for the Hyp’s orgless VALORANT team HypHypHyp, before the team disbanded on July 2nd. HypHypHyp won four online competitions in a row throughout June and early July. They will join former CS:GO professional luckRRR and VALORANT prodigy RHYME, a duo who NIP referred to as “an exceptional mix of talent and drive” in their press release.

“Our ambition has and always will be to field a top-tier lineup – our faith in the VALORANT scene and Riot’s plans for it remains strong and we’ll stop at nothing to get to the top spot,” explained Jonas Gunderson, COO of NIP. “It’s become clear that CS:GO experience is a strong predictor of VALORANT performance, and adding the spice of the highest level of Overwatch competition through HyP makes for a really strong foundation. This squad has an extremely high skill ceiling, has already proven itself competitively, and fits very well into our vision for team chemistry and esports performance. I couldn’t be happier.”

Like most of these players, luckRRR has been competing in VALORANT since the beta. He initially competed with VALORANDO, which was the first ever professional German VALORANT team. While competing with VALORANDO, luckRRR and his teammates consistently won online B-Tier and C-Tier tournaments. He left VALORANDO on June 14th and was signed by NIP on June 25th.

RHYME has been playing with NIP as a stand-in since April. He was signed permanently to NiP along with luckRRR on June 25th. RHYME brings very little professional competitive experience, beyond competing in some minor CS:GO events, but during his time competing with NIP in VALORANT he has proven a worthy challenger with a lot of potential.

HyP formerly played for the Paris Eternal before retiring from Overwatch League in April, citing a desire to focus on his health and well being. Hyp has been involved in professional esports since 2016 and won a variety of minor and major events while competing in Overwatch. He was also a member of the French Overwatch World Cup team in 2019.

Fearoth played CS:GO for Asterion, 3DMAX, and most recently the Smoke Criminals. With more than 3,000 kills in CS:GO competitions, he is a veteran esports competitor who has proven more than capable in VALORANT tournaments.

CREA competed in CS:GO for primarily C-tier teams such as Super6, ionic, and dizLown before retiring from esports in 2018. CREA returned to esports to compete in VALORANT back in April. Although CREA doesn’t bring as much experience as some of his new teammates, he is a valuable addition to NIP and will likely continue to improve as time goes on.

The new Ninjas in Pyjamas lineup will debut against forZe at the WePlay! Invitational on Wednesday starting at 4:00 AM CT.