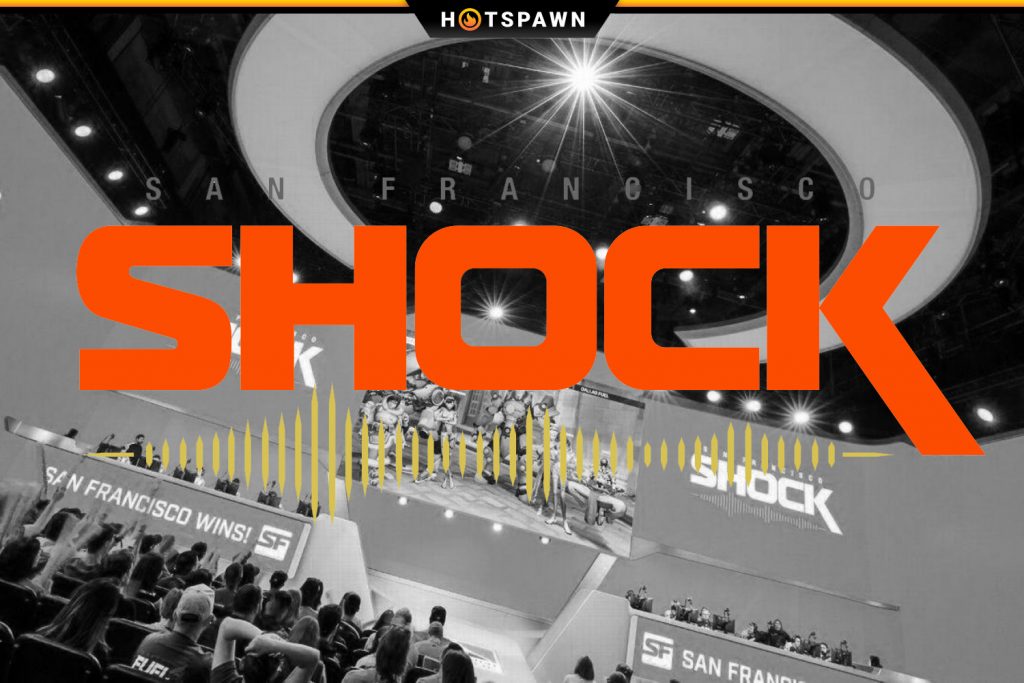 The San Francisco Shock have developed the best OWL team in the world. But it didn't start that way. (Photo courtesy OWL/Hotspawn)

The San Francisco Shock are undoubtedly the most dynastic and dominant force in the Overwatch League. Although the New York Excelsior have seen their fair share of successes, no other team has the record of success that the Shock has built over the past two years.

San Francisco excelled throughout Season 2 of the Overwatch League, eventually winning the title. During Season 3, they have looked equally dangerous, most recently winning the North American May Melee mid-season tournament. The Shock have quickly made a name for themselves as Overwatch’s most dominant team.

The Creation of the San Francisco Shock

The Overwatch League, when announced, comprised of twelve teams initially, all of which were franchised in various cities throughout the world. On July 12, 2017, NRG Esports, owned by Sacramento Kings co-owner Andy Miller, announced that they had acquired a founding member slot in the newly formed Overwatch League (OWL), which was set to debut in early 2018. NRG’s new team would be based in San Francisco and dubbed the Shock.

In a 2017 interview with Bay Area Gaming, Andy Miller explained his reasons for starting the San Francisco Shock: “I want kids in the Bay Area to root for SF Shock. Beforehand, if you wanted to support your team, you would have to go to a different city and only few can afford that. That is not what esports should be about, and while I know people love the global nature of it— I love it to— and seeing where all our fans buy our products, for NRG, that is super cool. But, if you want to create fanbases I think a hometown team is the best start because it creates stability for the team, investment, brands, and the fans.”

The SF Shock’s roster announcement was introduced with a great deal of hype by Shaquille O’Neal, Jennifer Lopez, Marshawn Lynch, and Michael Strahan, all of whom are invested in NRG Esports. The new roster was hailed by NRG and Miller as the best and brightest Overwatch talent available.

Some players, like BabyBay, played other pro esports like Counter-Strike before switching over to Overwatch. For others on the roster, Overwatch was to be their first professional esport experience.

Both Super and Sinatraa were signed before they were 18, which meant they ended up sitting out the first half of the inaugural season. Despite the fact that he couldn’t even play yet, Sinatraa was signed for a hefty $150,000 yearly salary, the highest pay of any OWL player.

With the highest paid OWL player and the fanfare surrounding the roster announcement itself, there were high expectations for this initial roster even before a match had taken place.

From Disappointment To Champion In Two Seasons

The Shock Fall Flat In Season 1

Despite the hype created by their initial roster announcement, the Shock fell well short of greatness in the inaugural OWL season. Due in part to their underage players being on the bench through the first half of the season, the Shock struggled to find consistent success throughout Season 1. Their players did not put up impressive performances at all, and in general the team looked very mediocre.

They finished the 2018 season in ninth place out of 12, with a very poor 17-23 record. However, this unremarkable start was only the beginning of their climb to the top. The strong roster moves that the Shock made during and after Season 1 made all the difference in setting them up for a championship run.

The Shock Take Roster Back to the Drawing Board

Even before the end of the inaugural season, the Shock were already building toward a stronger OWL Season 2. In the middle of the OWL inaugural season in 2018, the Shock picked up Flex Tank Hyo-bin “Choihyobin” Choi, Support Grant “Moth” Espe, and DPS Minho “Architect” Park. All of these players went on to play key roles on the team, with Moth and Choiyobin continuing to be essential players for the Shock to this day. They also picked up a new coach, Park “Crusty” Dae-hee in May of 2018.

To make room for these new additions, the team traded away Dante “Danteh” Cruz before season 2 began, and then traded away Sleepy and Babybay part way through Season 2.

With a new coach, a new roster, and both Super and Sinatraa in the active line up, the Shock looked like a whole new team coming into OWL Season 2. Most of Season 2 was dominated by the GOATs meta, a composition which relies on three tanks and three healers. The only effective answer to the GOATs strategy was to also play the GOATs strategy. The Shock shone brightly in GOATs mirror matches, dominating their opponents without mercy. The team ended up competing in the Grand Finals of all three season stages, winning the Stage 2 playoffs against the Vancouver Titans.

Leading into the final Season 2 playoff, the Overwatch League instituted the Role Lock which forced teams to play two damage, two support, and two tanks. This decision was made to force GOATs to go away, since the meta had become so stagnant that many viewers were complaining. With such a huge change only a few weeks before the capstone playoff tournament series, the playoffs were going to be a test for the Shock’s effectiveness with compositions outside of GOATS.

The OWL Season 2 Playoffs started rough for the Shock. The Atlanta Reign, led by former Shock DPS Babybay, upset the Shock in the first round of the playoffs in a 4-3 victory. This loss dropped them to the losers bracket. Undeterred by the setback, the Shock did not drop a single map the rest of the tournament, sweeping every match including the Grand Finals against the Vancouver Titans. Their impressive playoff run earned them the Season 2 championship. Sinatraa was named the 2019 Overwatch League MVP for his incredible performance on Zarya during the GOATS meta and his premiere Doomfist abilities during the playoffs.

The only remaining member of the Shock’s original roster lineup is Super. Every other original member has been traded, released, or retired from Overwatch. In their place, the Shock have built a super team made up of some of the best role stars available from around the world.

Sinatraa retired from Overwatch completely in April to pursue a career playing VALORANT for the Sentinels. As the reigning MVP, his loss is obviously a major blow to the Shock and Overwatch as a whole. In 2017, Sinatraa was framed by Miller as the Lebron James of Overwatch. There is a reason he was the highest paid OWL player when he was 17 and not even eligible for competition yet. With his incredible mechanical skills and ability to control any Flex DPS duel, Sinatraa was a centerpiece of their championship win in 2019.

Going into OWL Season 3, the Shock picked up retired Overwatch player Seonchang “ANS” Lee who played for South Korean Tier 2 team, Blossom. As one of the best snipers in the world, Ans consistently dictates sniper duels and accrues crucial picks for his team.

The team also recently transferred Minho “Architect” Park’s contract to the Hangzhou Spark. On the same day they lost Architect, the Shock announced they had picked up former Titan’s Flex Support player Jooseok “Twilight” Lee. Twilight was a top candidate for MVP in 2019, and was only narrowly defeated by Sinatraa for the title.

Despite the magnitude of losing one of the best OWL players around, the Shock have shown no weaknesses or signs of slowing down in Sinatraa’s absence. In fact, their diverse array of top tier players are looking quite unstoppable in Season 3.

The current active Shock roster as of writing this article includes:

The Shock Are Heading Straight To The Top, Again

The SF Shock have looked very strong in the most recent Overwatch season. During the North American May Melee qualifiers and tournament series, the Shock were the #1 seed and won the tournament in dominant fashion over the Florida Mayhem. The Shock’s Season 3 roster is so deep that the sudden loss of both Sinatraa and Architect mid-season barely affected their ability to win the tournament.

The Shock are the clear front-runner in North America, and it’s difficult to imagine the Shock’s dominance going anywhere soon, especially when their primary rival, the Vancouver Titans, imploded this year. If the Shock maintain their current trajectory, you can expect to see them in the Season 3 Grand Final match against, probably, the Shanghai Dragons.