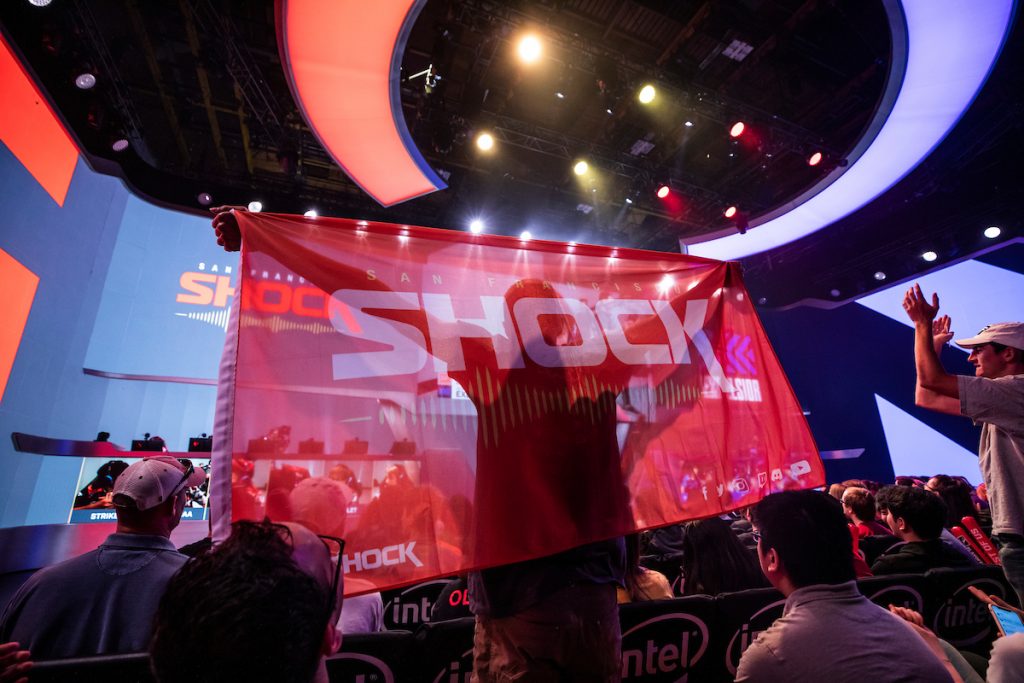 The Shock and the Dragons continue to dominate their respective regions. (Photo courtesy Robert Paul - Blizzard)

On Saturday and Sunday, the Overwatch League (OWL) hosted the final week of Summer Showdown qualification matches. In the North American region, the San Francisco Shock earned the number one seed after qualifying with a 3-0 record and a +9 map differential. In the Asia-Pacific region, Shanghai took the number one seed after achieving a 4-0 record with a +8 map differential.

The NA play-in match was also hosted on Sunday. The #13 Washington Justice defeated the #12 Boston Uprising to advance into Summer Showdown knockout matches. They will face Los Angeles Gladiators on Friday.

Genji returns to the meta

Genji received a significant buff on live servers two weeks ago. Genji’s Shuriken damage increased from 28 to 30, his secondary fire spread was reduced, and his deflect duration was increased from 1.5 seconds to two seconds. These changes directly buffed Genji’s damage, which in turn have also increased his ultimate recharge rate.

The Genji changes were added to the Overwatch League this week, and they made an immediate and noticeable difference. Genji has been irrelevant in the meta for some time and has rarely seen play in season 3. This week, a number of teams were running Genji. Most notably, Ho-Sung “TTuba” Lee’s Genji was key to the Washington Justice’ strategy for defeating the Boston Uprising. We can expect to see more Genji played in the Summer Showdown tournament next week.

The Shock demolished the Fusion on Sunday, sweeping them in a decisive 3-0 victory. The match between these two highly ranked teams was anticipated to be the most competitive match of the weekend, but the Shock were absolutely dominant throughout the series. With the victory, the Shock became the only NA team to go undefeated in Summer Showdown qualification. As one of the top four seeds, the Shock will receive a bye to Saturday’s quarterfinals.

Both teams gravitated toward similar Tracer + hitscan strategies, however it was clear that the Shock were better at executing the composition. Throughout the series, the Shock’s DPS core, Seonchang “ANS” Lee and Nam-joo “Striker” Kwon, consistently controlled and won DPS duels against Jae-hyeok “Carpe” Lee and Hee-Su “Heesu” Jeong, which prevented the Fusion from ever getting a foothold in the match. Ans won the player of the match and finished the series with 56% scoped critical hit accuracy on Widowmaker.

The Shock won the May Melee last month and will be looking to repeat their impressive championship run next weekend at the NA Summer Showdown.

Despite having a poor performance on Sunday, the Fusion still managed to earn a #3 seed for the Summer Showdown, which means they will also receive a bye through to the quarter final round.

The Atlanta Reign had an excellent performance against the Vancouver Titans on Saturday, defeating the fledgling Overwatch lineup 3-0. The victory brought the Atlanta Reign to a 2-1 qualifying record with a +4 map differential, which was good enough to take the second seed in the Summer Showdown.

All bark AND all bite. The @ATLReign sweep the @VancouverTitans and hop into a top-four seed in the Summer Showdown!#LetItReign #OWL2020 pic.twitter.com/vulX4f1pV1

The Atlanta Reign are currently sitting on a 7-6 record. They have shown that they are consistently capable of defeating those ranked below them in the standings, but they struggle to hang with some of the higher ranked teams like the SF Shock or the Florida Mayhem. That said, the Reign have demonstrated numerous times that they are capable of winning any playoff match on any day. Afterall, the last playoff match which the Shock lost was to the Reign in the 2019 Season Playoffs.

Against the Odds, the Vancouver Titans Acquire #4 seed

The Titans showed significant improvement throughout the Summer Showdown qualifiers. Last week the they finally won a match with their new roster, sweeping the Dallas Fuel. That victory broke a seven game losing streak. This week, the Titans managed to pick up another win, this time overcoming the Boston Uprising in a convincing 3-0 sweep.

With two sweep victories under their belt, the Titans ended up earning the #4 seed and a bye into the quarterfinals from the Summer Showdown, only a month after failing to qualify entirely for the May Melee.

The Titan’s ultimate economy, mechanical skills, and overall teamwork appear to finally be coming together. The new roster was announced in early May, after the Titans released their entire former roster. All of the players were brought up from the tier 2 Overwatch circuit and have all looked individually impressive at various times. Now it appears the team is starting to get comfortable playing together.

It’s good to see signs of improvement in the young Vancouver Titans team.

In May, Florida defied the odds and everyone expectations by making a run to the Grand Finals of the May Melee tournament. Their impressive performance forced many Overwatch fans and analysts to rethink what the Mayhem may be capable of. However, the team has looked less impressive over the past couple of weeks of Summer Showdown qualifiers.

To be fair to the Mayhem, they did put up a respectable performance, ending with a 2-1 record and a +1 map differential. Unfortunately for Florida, seven teams ended qualification with a 2-1 record, and due to their poor performance against Houston on Saturday, the Mayhem ended up with a middling #7 seed.

The Mayhem will start their Summer Showdown with a rematch on Friday against the #10 Houston Outlaws, who they struggled against on Saturday.

Next weekend the Dragons will look to claim their second APAC regional championship in a row, after winning the APAC May Melee last month.

The Dragons have dominated the APAC region throughout season 3. The team is currently sitting on top of the OWL rankings with a seasonal record of 18-2 and a staggering +35 map differential. While playing their current starting lineup, the Dragons have only lost a single map in 2020. With the Dragons so far ahead of the next best team in Asia, it is hard to predict that any other team will win the Summer Showdown next week.

For the second tournament in a row, the Charge went undefeated in tournament qualification. The Charge ended the Summer Showdown qualifiers with a 4-0 record and +4 map differential. That record is good enough to clinch the #2 seed. The Charge are looking to advance into semi-finals over the #7 Chengdu Hunters next Saturday.

The Charge have had a good year, on paper. They currently hold a 13-6 seasonal record and are #4 in the seasonal rankings. They have shown they are capable of defeating nearly every team in Asia. However, they haven’t really shown that they can win in high pressure situations. Despite being the favorite and the top seed in the May Melee, the Charge were eliminated by the lowest ranked Seoul Dynasty team.

The Charge need to figure out how to translate their consistent regular season successes into playoff wins. The Summer Showdown is an opportunity for the Charge to prove that they are a real contender who can perform under postseason pressure.

NYXL lost a close 3-2 match to the Guangzhou Charge on Sunday. As a result, the Excelsior ended qualification with a 2-2 record with a +3 map differential. Fortunately for New York, this record was still good enough to secure the #3 seed.

Since the NYXL moved to South Korea earlier in 2020, they have performed reasonably well. They were eliminated from the May Melee by Shanghai in Semi-finals, after narrowly defeating Chengdu in a very close series. NYXL have not yet shown the consistency that many have come to expect from the veteran team.

In the past, the NYXL have performed well in tournament play. In the 2018 inaugural OWL season, the NYXL Won the stage 2 and stage 3 title matches, and placed second in the stage 1 and stage 4 title matches. So the NYXL are definitely capable of high level performances in the playoffs. Next week they will match up against the Hangzhou Spark in the quarterfinals.

What do expect in the Summer Showdown

The Overwatch Summer Showdown will feature two regional tournaments, one in North America and one in Asia. Both tournaments will be taking place next weekend. The Summer Showdown will feature a combined $275,000 prize pool. The winners of each tournament will take home $50,000, the second-place teams will receive $25,000, and the third and fourth place teams will receive $10,000. Each win will net an additional $5,000.

The North American tournament kicks off on Friday, July 3rd with the knockout rounds. The top four teams advanced directly to quarterfinals, while the rest of the teams will compete for the remaining slots in the quarter final round. For the teams competing in those matches, the high seeds were able to select their opponent from the four lower seeds. The selection show for those matches occurred on Sunday.