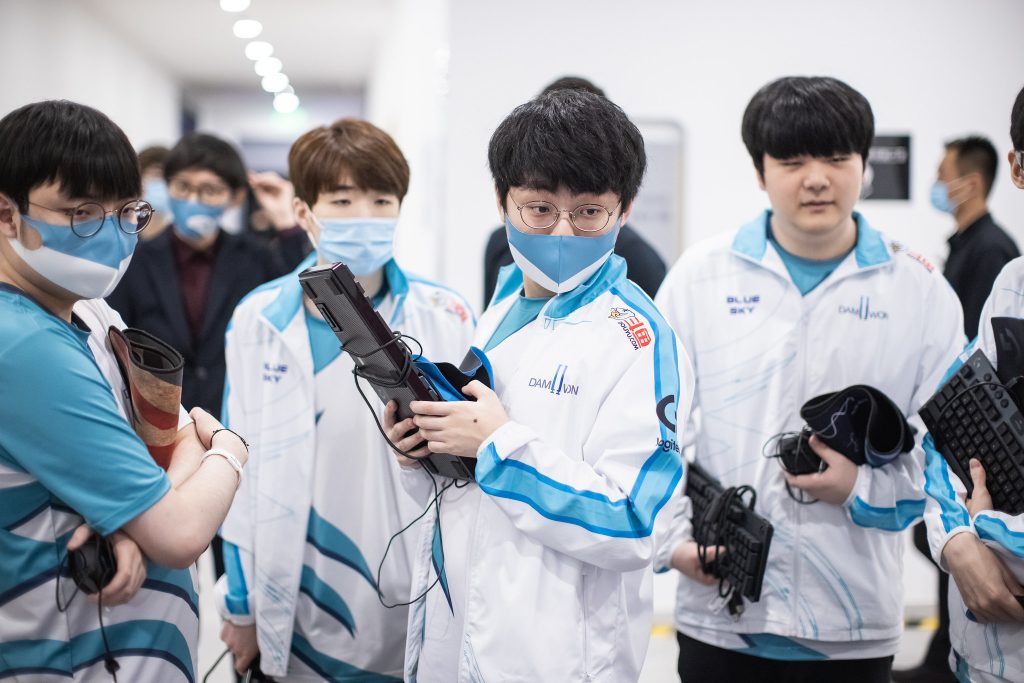 DAMWON Gaming quickly secured first in Group B and are onto the quarterfinals. (Photo via Riot Games)

The 2020 World Championships continued on with the conclusion of Group B. Just like in Group A, the two favorites at the start of the group both made it out, as DAMWON Gaming and JD Gaming topped the group. Meanwhile, Rogue and PSG Talon saw their tournament runs come to an end. We take a look at the top storylines of the World Championship so far.

Group B was expected to be a top-heavy group, as it housed two of the three tournament favorites. It was no surprise, then, that those two favorites advanced with relative ease on to the quarterfinals of the tournament.

The LCK’s top seed DAMWON Gaming advanced in first after finishing the group stage 5-1. They began their tournament with a game against their top competition in the group, JD Gaming. DAMWON Gaming turned what was supposed to be a competitive game into a total stomp. Jang “Ghost” Yong-jun’s Jhin picked up First Blood, DWG picked up the first dragon, Rift Herald, and turret of the game, and this one was never close. DWG opened with a resounding 25 kill to 7 win in 24 minutes.

DWG then closed out the first round robin with two more wins. They first dominated Rogue, needing only 7 kills to command an 8k gold lead. Even when Rogue were up 4 kills to 2, they were down almost 6k gold due to DWG’s overall superior play. DWG finished the first round robin by beating PSG Talon 15 kills to 7 in 28 minutes to take a commanding 3-0 lead in the group.

Congratulations to @DamwonGaming for securing their spot in the quarterfinals of #Worlds2020! 🎉 pic.twitter.com/R7VPBbobvw

DAMWON then locked up Group B quickly on day six. Their rematches with PSG and Rogue were just as one-sided, as DWG beat PSG 14 kills to 4 in 29 minutes and Rogue 22 kills to 8 in 23 minutes. That 5-0 start secured first place before their final game of the group stage.

JD Gaming felt the ramifications of drawing their toughest possible opponent to begin their tournament, losing in the aforementioned opener to DAMWON Gaming. They bounced back to finish the first round robin in second place with comfortable victories over PSG Talon (17 kills to 3 in 23 minutes) and Rogue (21 kills to 8 in 30 minutes).

With their win over Rogue to open day six, JD Gaming had already secured their advancement to the quarterfinals before they played their fifth game of the group stage. Funnily enough, JD Gaming lost that game, trailing the entire way to hand PSG Talon their first victory in the Main Event. With that loss, JD Gaming could no longer challenge DAMWON Gaming for first in the group, settling to advance in second.

That made DAMWON and JDG’s final game of the group against each other meaningless in the standings, but a good opportunity for JDG to prove they are still a force. They did just that, handing DWG their first loss of Worlds in a very bloody 25 kill to 18 win in 37 minutes. Zhang “Zoom” Xing-Ran’s Camille was a force in the side lane, going 12/6/6.

However, DWG are still the big victors to advance out of Group B in first place. That will likely allow them to dodge both Suning and Top Esports in the quarterfinals, setting up for an easier matchup. They may even get a chance for a revenge matchup against G2 Esports, who knocked them out 3-1 in the quarterfinals just a year ago.

On the other hand, JD Gaming will be the most feared two seed in the tournament. Though they dropped two games, they also dominated most of their wins and proved themselves capable of going toe-to-toe with DAMWON Gaming.

Rogue knew they were in for an uphill battle when they were drawn into Group B. Though PSG Talon weren’t considered the most fearsome Play-In team, few gave them a chance to advance from a group featuring both DAMWON Gaming and JD Gaming. That turned out to be the case, as Rogue finished 1-5 and have been eliminated from the competition.

Things started out incredibly well for Rogue in their opener against PSG Talon. Playing against a team that was already starting their third different lineup at Worlds, Rogue dominated in every facet. Starting with Steven “Hans sama” Liv’s First Blood, Rogue owned the map. PSG traded a mountain drake for Rogue’s Rift Herald and eventually grabbed a turret while Rogue did Baron, but those two objectives were the only ones that prevented Rogue from a perfect game. They won 16 kills to 0 in 28 minutes for a near-flawless performance.

Unfortunately, things went downhill from there. Rogue were lifeless in their first loss to DWG, getting squeezed out despite handing over only 7 kills. Their match against JD Gaming featured more competitive fighting, but JDG were in control the entire way as well. Rogue finished 1-2 in the first round robin, needing to find a way to pull off an upset or two on day six to survive.

Rogue could not muster anything in the second round robin either, going 0-3 on their final day of competition. Their opening losses to JD Gaming and DAMWON Gaming sealed their fate, dropping them to 1-4 with no hope at a tiebreaker. Rogue then ended their tournament with a loss to PSG Talon. While it had no ramifications for either side, both teams were certainly playing to end the season on a high note.

We finish the season as 1 of the best 16 teams in the world. #Worlds2020 #GoRogue pic.twitter.com/viHAhHGCzV

With Rogue’s season now at an end, they will turn their attention to their roster in the off-season. Their entire lineup is signed through 2021, so there is no immediate need to address the roster. However, Rogue could still be in the market for some upgrades. They added Hans sama last off-season when they considered their ADC position too weak. Could they look at a potential top replacement for Finn “Finn” Wiestål? With his champion pool narrowing to predominantly tanks, Rogue could look for a more carry-focused top laner to bring another dimension to the lineup.

PSG Talon had a nice run in the Play-Ins despite missing their full lineup. Kim “River” Dong-woo and Park “Tank” Dan-won were unavailable until the Main Event, meaning PSG needed their substitutes to give them a chance. Hsiao “Kongyue” Jen-Tso and Chen “Uniboy” Chang-Chu did that, helping PSG Talon to top the Play-In Group B. Now PSG had to prove their preferred lineup could make some noise in the Main Event.

It didn’t look like it in the first round robin, as PSG Talon started 0-3. Opening the tournament against Rogue, a game they would need to win to hope to advance, PSG Talon were held kill-less and almost fell victim to a perfect game. Subsequent losses to JD Gaming and DAMWON Gaming left them on the cusp of elimination heading into day six.

Through all the ups and downs of this World one thing has remained constant and that was your support!

Thank you to all the existing and new fans of PSG and of the PCS… well take the lessons learned from this year and come back stronger 🦾#PCSWIN #PSGWIN #WORLDS2020 pic.twitter.com/JHe7vXPmDZ

Another loss to DWG knocked PSG Talon out, but PSG did show their potential in their final two games. They first played spoiler to JD Gaming, handing them a loss that eliminated JDG from contending for first place in the group. PSG then ended their tournament by beating Rogue 13 kills to 4, avenging their earlier loss.

PSG definitely got better as the tournament went along, but their group did them no favors. They may have had a better chance had River and Tank been able to get stage games in the Play-In stage. Both played very well on day six after lackluster performances in the first round robin.

Group C is next up on the schedule. With Fnatic, Gen.G, and LGD Gaming all tied at 2-1, it looks like it could anyone (but TSM) to advance. The day seven action kicks off with Fnatic facing TSM on Saturday, October 10th at 1 a.m. PST.