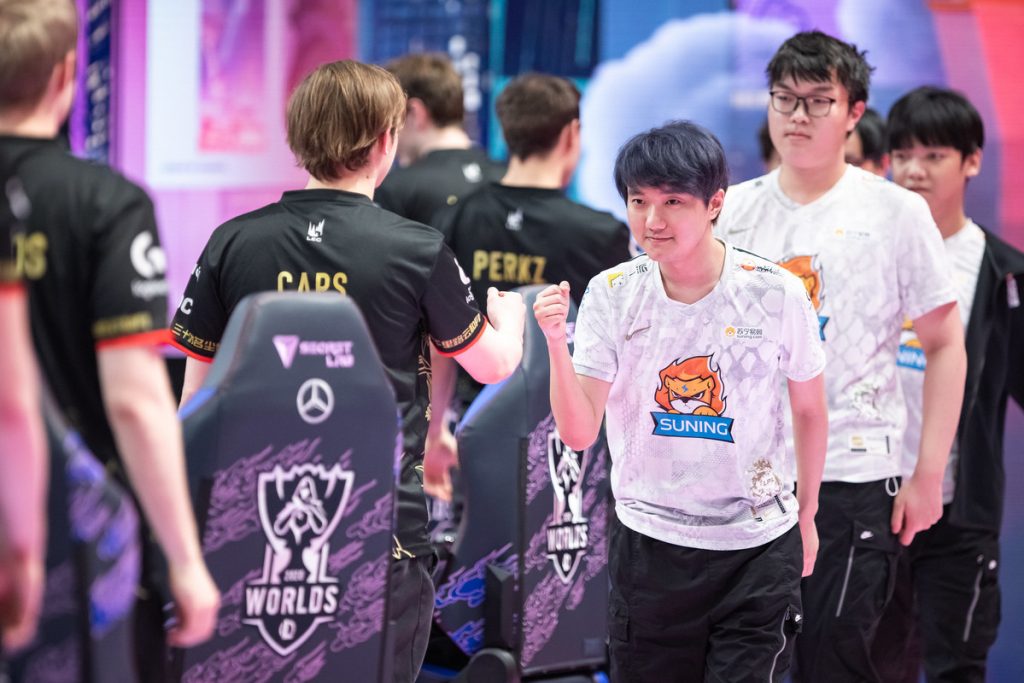 The 2020 World Championships continued on with the conclusion of Group A. The two favorites at the start of the group both made it out, as Suning beat G2 Esports in a tiebreaker to finish first. Meanwhile, Team Liquid failed to advance after finishing 3-3. We take a look at the top storylines of the World Championship so far.

Based on their perceived regional strength, G2 Esports and Suning were the two favorites to lead Group A heading into the tournament. That prediction proved accurate, as both teams will move on from groups to advance to the quarterfinals.

G2 Esports raced out to the group lead after the first round robin. They kicked off their tournament by beating Suning in the opener. Suning led for much of the mid game, but G2 Esports knew how to bring it back late, winning in 43 minutes despite trailing 19 kills to 21. G2 then took care of Machi Esports in their second game, winning 24 kills to 15 in 38 minutes.

Team Liquid upset G2 Esports to close out the first round robin, but G2 got their revenge by beating Team Liquid in the rematch to begin day five. Another win over Machi Esports put G2 at 4-1 in the group, needing only to beat 3-2 Suning again to close out Group A in first.

Suning were 3-2 heading into the matchup because, like G2 Esports, they ended up dropping a game to Team Liquid. Suning fell victim to TL’s early invade, putting them behind early. Suning clawed their way back in by being superior laners, but Edward “Tactical” Ra’s early rotation to Rift Herald helped Team Liquid build on their early lead. Team Liquid ended up winning 23 kills to 7, forcing Suning to beat G2 Esports to avoid going to a tiebreaker for second place.

Instead, Suning went on to a tiebreaker with G2 Esports for first. Suning jumped out into the lead in kills, but G2 kept things close based on their early CS leads. However, G2 couldn’t deal with Chen “Bin” Ze-Bin’s Camille in the side lane. Running Ignite with his Teleport, Bin had strong kill threat to go along with the quick turret taking of his Trinity Force and Precision Protocol. One big team fight at G2’s bot lane inhibitor quickly ended the game for Suning, giving them a 17 kill to 4 win in only 23 minutes to tie atop the group.

The two teams then met for a second consecutive game to play for first place in Group A. As is often the case with LPL teams and G2, there was plenty of fighting involved. Marcin “Jankos” Jankowski picked up First Blood on Lillia, but Suning matched with their own kills across the map. A big fight win for Suning at the first Rift Herald gave them the early gold lead — a lead they would never relinquish.

Suning would go on to secure three consecutive Barons, putting themselves on the cusp of first place. However, G2 Esports had also given themselves a chance to capture Infernal Soul. So, when Suning chose to take their third Baron, G2 rushed down to Infernal to go for the trade. Instead of using that Baron to immediately push, Suning instead went to contest G2 on the Soul. G2 secured the buff, but Bin made sure they didn’t get away unscathed. His Gangplank teleport flank immediately deleted  Rasmus “Caps” Winther’s Syndra and Luka “Perkz” Perković’s Senna, eliminating G2’s damage. Suning would go on to ace G2, giving them their window to close out the game. Suning won the tiebreaker 22 kills to 21 in 44 minutes.

With that result, Suning will advance to the quarterfinals to face one of the second seeds, while G2 Esports will be forced to face a first seed. Considering the strength of 3-0 teams like DAMWON Gaming and Top Esports looming, the two consecutive wins by Suning could prove vital to making a deeper run in the tournament. G2 will have to regroup and put together a better performance in the subsequent best-of-fives.

After a strong showing in the Play-In Groups, Team Liquid looked poised to play spoiler in Group A of the Main Event. G2 Esports and Suning were the favorites, but Team Liquid were loaded with Worlds experience and had the advantage of playing some stage games

Things didn’t get off to a great start. Playing against Machi Esports in their opener, Team Liquid played one of the worst games of the tournament. Using the patented “do nothing until you lose” North American strategy, Team Liquid lost to the team they desperately needed to beat. Machi won 9 kills to 4 in 37 minutes, never needing to fight to grow their gold advantage. It was a nightmarish start for TL.

Their next loss to Suning was similarly one-sided, but this time to a more respected opponent. Suning won 12 kills to 2 in 32 minutes.

I didn't know Tactical has a middle name

Team Liquid finally showed signs of life in their third game. Playing against G2 Esports, TL took some engage with Volibear, Orianna, Kalista, and Sett, and TL used it. Nicolaj “Jensen” Jensen rebounded from his poor performance against Machi to dominate, going 10/2/10 on Orianna to lead TL. Team Liquid won 24 kills to 11 in 34 minutes to pick up their first win of the Main Event.

However, TL’s hopes of advancing took a big hit when they lost their rematch to G2 Esports on day five. TL went with a mid game spiking composition with Impact on Lulu, but G2 were too strong early. Riding their scaling advantage, G2 won 19 kills to 3 in 29 minutes to put TL at 1-3 with two games to play.

TL pulled off the aforementioned upset over Suning to keep their hopes alive. They immediately followed it up with a rematch win over Machi Esports, winning 22 kills to 6 in 28 minutes to even up their group record at 3-3. However, TL needed G2 Esports to beat Suning in the final game for TL to have a chance at a tiebreaker. Suning won that game, eliminating TL in third place in the group.

Team Liquid went 1-1 against the two top teams in Group A, but the reason they did not advance is because they were the only team to lose to Machi Esports. While it was great to see them prove they could hang with and beat some of the best in the world, it was also a reminder of just how brutal that game one loss was. The no-engage draft and quiet early game eventually doomed TL’s entire tournament run.

Thank you for your support in 2020. Despite losing in Groups, we’re proud of the immense progress the team has made, from our initial struggles in Spring to the drastic changes we’ve seen this week. We didn’t get the results we expected but we still played our hearts out today. pic.twitter.com/k9EkxyW7ML

With the loss, Team Liquid will have some big off-season decisions to make. Tactical and Jo “CoreJJ” Yong-in remain under contract and focal points of the team, so they have a solid foundation. However, the entire top half of the map has their contracts set to expire. Impact and Jensen are very valuable given their North American residency, so it wouldn’t be surprising for TL to look to keep them.

TL gambled big in the off-season by letting Jake “Xmithie” Puchero go for Mads “Broxah” Brock-Pedersen, and while Xmithie didn’t shine in the disaster that was Immortals, Broxah never found his aggressive playstyle with the notoriously passive TL. Team Liquid could try to run it back with the entire squad again, but Steve “LiQuiD112” Arhancet has never passed up an opportunity to try to improve his team.

LOOKING AHEAD: GROUP B

Group B is next up on the schedule. A clear pecking order has been established, as DAMWON Gaming dominated the first round robin to start 3-0. They are followed by JD Gaming (2-1), Rogue (1-2) , and PSG Talon (0-3). The day six action kicks off with PSG Talon against DWG on Friday, October 9th at 1 a.m. PST.