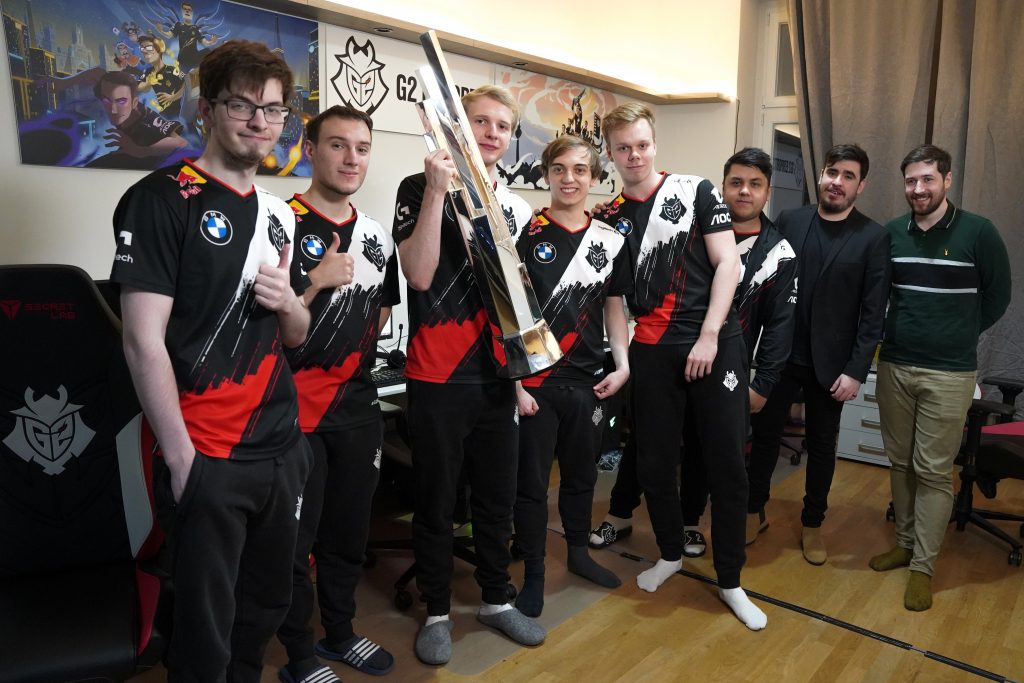 In just over a week, the tenth iteration of the League of Legends World Championship kicks off in Shanghai, China. There, four European teams will battle among eighteen other teams for the Summoner’s Cup. After back-to-back silver medals in 2018 and 2019, both times suffering crushing 3-0 defeats at the hands of Chinese regions in the grand finals, the world champion title has come tantalizingly close.

While China once again looks strong, as can be read in our LPL preview, the representatives from the LEC are not to be underestimated either. Here is a rundown of the four teams who’ll have to make a long-held dream a reality for European League of Legends fans.

Back with a vengeance

G2 Esports is the most recent LEC team to make the finals of the League of Legends World Championship. Coming into Worlds as one of the favorites in 2019, they were on a tear only to be stopped by FunPlus Phoenix in the grand finals. In 2020, G2 spiced things up. While not bringing new players to their main roster, they decided to swap the positions of mid laner Rasmus “Caps” Winther and bot laner Luka “Perkz” Perković in the Spring Split. The swap caused some bumps along the ride, but G2 scooped up the Spring Split title in the end with relative ease.

Nevertheless, the team decided that it was better to transition back to their old formation. Caps went back to the mid lane, and Perkz was back in the bot lane in the Summer Split. Prior to the Summer Split, G2 announced that they’d be taking it a bit easier in terms of practice, as they didn’t want to burn out their players before the World Championship. However, their plan to ramp up towards the end of the Split and still cruise to a #1 spot didn’t work out well. The team had little practice heading into the first week as a result of Perkz’s father passing away, and G2 had trouble finding their flow. Oftentimes it was Caps who dragged the team across the finish line, but the games were rarely clean. Towards the end of the Split, when G2 actually had to fight for their spot in the Playoffs, the team got back on track and went on a six-game win streak.

Thankfully for G2, while the LEC team was often a one-man-army in the regular Split, their full team showed signs of life in the Playoffs. In the Playoffs, the players who had often been carried by Caps in the regular Split showed glimpses of their own brilliance. Mind you, they still made uncharacteristic mistakes in their round one victory over MAD Lions, their upper bracket semifinals match against Fnatic, their lower bracket semifinals match against Rogue, and their grand finals against Fnatic. They may have won the Summer Split, but the way they did it in was subpar at the very least.

There are signs of hope for G2 though. At Worlds, G2 has a relatively easy group with LPL’s third seed Suning Gaming, PCS’ first seed Machi Esports, and a yet-to-be-determined Play-In team. If there is any team that can shrug off a sloppy Summer Split, it is G2. In China, they’ll be looking to unlock their full power by going all-in on training. If G2 finds their shape and once again can dance on Summoner’s Rift like they did in 2019, they’re absolutely serious contenders for the championship title.

If the Summer Split can be described as bumpy for G2, the competition was nothing short of a roller coaster for Fnatic. After finishing second in the LEC Spring Split, yet again standing in the shadow of rivals G2, Fnatic actually had an incredibly promising start in the Summer Split. Whereas the opening weekend forecast the chaos that would be the LEC Summer Split for many teams, Fnatic emerged with a clean 3-0 score. But from here on out, it all went downhill pretty quickly. Two 0-2 weekends followed, and Fnatic dropped to a seventh place.

Fnatic was a roster of players, but they were barely a team. In-game, individual team members seemed to have completely different strategies in mind. As their players would later say, reflecting on the Split, Fnatic had trouble finding their identity as a team. While trying different approaches to the game failed and the losses stacked up, the team environment became increasingly tense. Their wins were often claimed by individual members stepping up—especially jungler Oskar “Selfmade” Boderek and bot laner Martin “Rekkles” Larsson performed well. Other times Fnatic was handed a win in games that they would have lost in 99% of the cases, with the most generous win-donators being Misfits Gaming. With band-aid solutions, duct tape, and glue, Fnatic barely held its team together and narrowly made it to the Playoffs. 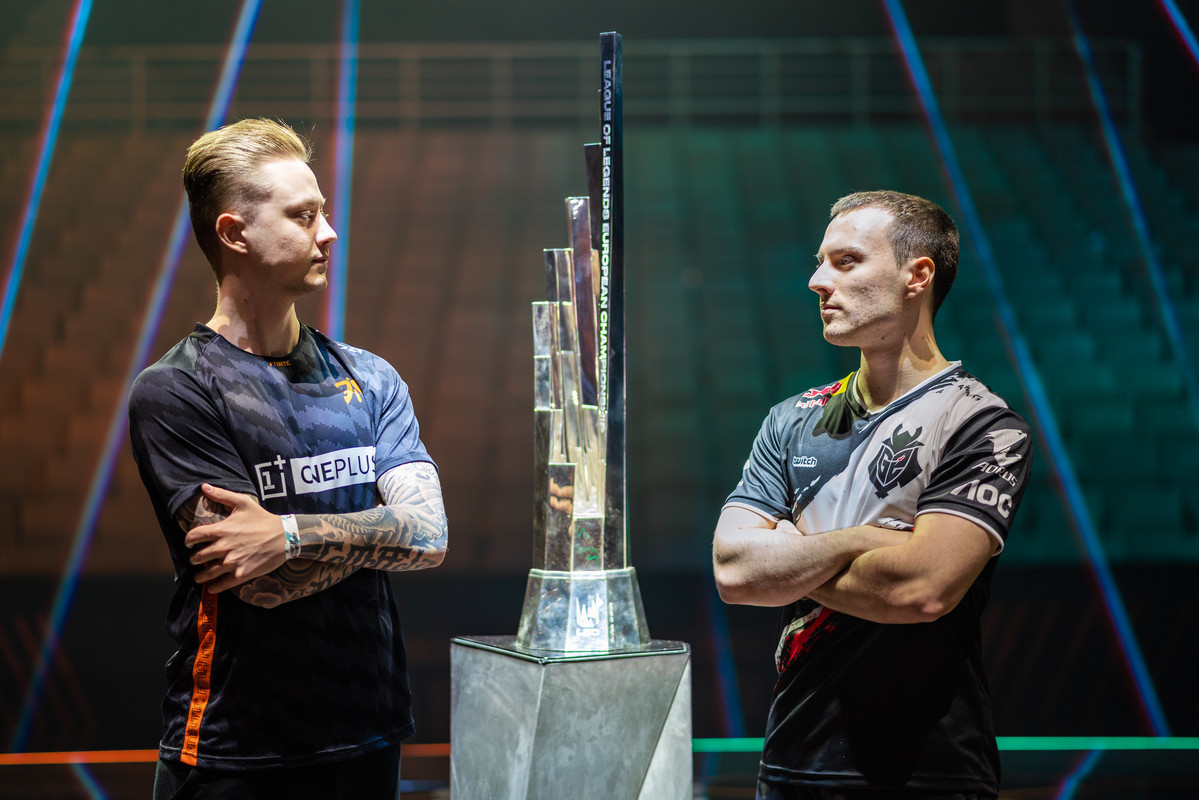 The fact that the Summer Split Playoffs were played on a different patch than the regular Split was immensely impactful for Fnatic. During the time off, the team managed to find a few compositions that worked well for them. And, thankfully for them, their round one opponents Rogue had not adapted to the new patch at all and came unprepared. Fnatic won ruthlessly in a 3-0 fashion. In the upper bracket semifinals, after a messy series, Fnatic finally overcame their rivals G2 after not winning against them in a ‘best-of-x’ series for over 780 days. However, when they met again in the grand finals, the duct tape and glue construction of Fnatic fell apart again, and they lost 3-0.

Fnatic has the uncanny ability to find a way out of a difficult situation. They start off slowly, but when everyone’s saying that this will be the time Fnatic falls, the team members all of a sudden come together and make it work. Even in 2019, in a ‘group of death’ with T1 and RNG, Fnatic advanced to the quarter finals. This year the team is all but in a group of death. They’ve been paired with TSM and Gen.G, who Fnatic absolutely should be able to defeat if they manage to bring the team together and get the players in sync. Their strongest assets have been their explosive jungler Oskar “Selfmade” Boderek and the consistently strong bot laner Martin “Rekkles” Larsson. Fnatic’s greatest obstacle at Worlds, as cliché as it may sound, will be themselves.

For Rogue and MAD Lions, the LEC’s third and fourth seed respectively, a tough climb awaits. Rogue had a surprisingly strong Summer Split after an on-and-off performance in the Spring Split. During the break between the LEC Splits, the team managed to get all players on the same page and figure out how they want to approach the competition, what style they want to play. Simply put: allocate the resources to mid laner Emil “Larssen” Larsson, and scale into the late game. The formula worked well for them and Rogue finished first in regular Split, although the final weeks were a bit more difficult for the team.

However, Rogue were in for a rude awakening in the Summer Split Playoffs. Without adapting their game plan and instead sticking to their guns, they faced off against Fnatic. What followed was nothing short of a stomp, and it was Rogue who was on the wrong end. They went down 0-3, and because they had shown a one-dimensional approach to the game up until this point, many were questioning if Rogue would be a worthy representative at the World Championship. But they bounced back with astonishing strength. Within one week they turned their practice around, grinding new styles to play. Against MAD Lions in the lower bracket, it was Rogue who showed no mercy. With aggressive gameplay and a slew of new champions added to their champion pool they obliterated MAD Lions 3-0. In the subsequent match against G2, in the lower bracket semi finals, Rogue managed to take it to five games. While they lost the match, Rogue had more than proven their worth.

Rogue has been seeded into Group B with LCK champion DAMWON Gaming and LPL second seed JD Gaming. It’s easily the toughest group they could have been seeded into. Top laner Finn “Finn” Wiestål has been a weak point, and facing off against two of the best top laners in the world in Jang “Nuguri” Ha-gwon and Zhang “Zoom” Xing-Ran will be tough for Rogue. However, while the climb might be steep, Rogue has shown incredible flexibility and a strong grasp of what works in best-of-one environments, so they may have a few surprises in store for the Group Stage.

MAD Lions face a different mountain to climb. The rookie squad, who burst into the LEC with flamboyance and aggressive gameplay, finished third in the Spring Split Playoffs. And the start of the Summer Split looked incredibly promising too. For weeks on end the team sat atop the rankings, showing innovation in their drafts and dominance in every team fight. MAD Lions grew to be fan favorites because of their bold playstyle and hilarious post-game celebrations. They were on a steady course to finish first in the LEC and grab a ticket to the World Championship.

But when the final weeks of the LEC Summer Split came around, MAD Lions started to crumble under the pressure. The happy team wasn’t the happy team anymore, and the synergy between team members noticeably waned. While individual members were still making some great plays, MAD Lions just didn’t gel as well as they had previously. Thankfully for them, direct competitors Rogue were struggling too. In the final weekend of the Summer Split, MAD Lions had the #1 position in their own hands after Rogue suffered a loss. But MAD Lions fumbled, and ended the regular Split as second. The Playoffs didn’t start a whole lot better for MAD Lions. They did manage to take a game off G2 in the first round, but were trumped in the end. With a ticket to Worlds on the line, MAD Lions faced off against miracle runners Schalke 04 in the LEC lower bracket. Against a team that had even more trouble dealing with the pressure than they, MAD Lions stood strong and secured the victory. Yet, when they met Rogue in the next round, the team was once again a shell of their former self.

MAD Lions will have to qualify for the World Championship’s main event by making it out of the Play-In stage. It is perhaps the best path for the LEC team to take. In the Play-In stage, they can get accustomed to playing against international opponents and gain back their confidence. The team needs to figure out what works for them in the meta and which surprise picks they can whip out. If they can get past the mental barrier that haunted them in the last stages of the Summer Split, they reach a state where they won’t shy away from coordinated aggression and cleverly chosen team fights, MAD Lions should make it out of the Play-Ins with relative ease. If they do so, they’ll be automatically seeded in Group D of the main event with Top Esports, DRX, and FlyQuest. The mantra for MAD Lions will have to be to take it one step at the time—that’ll get you to the top of the mountain too.