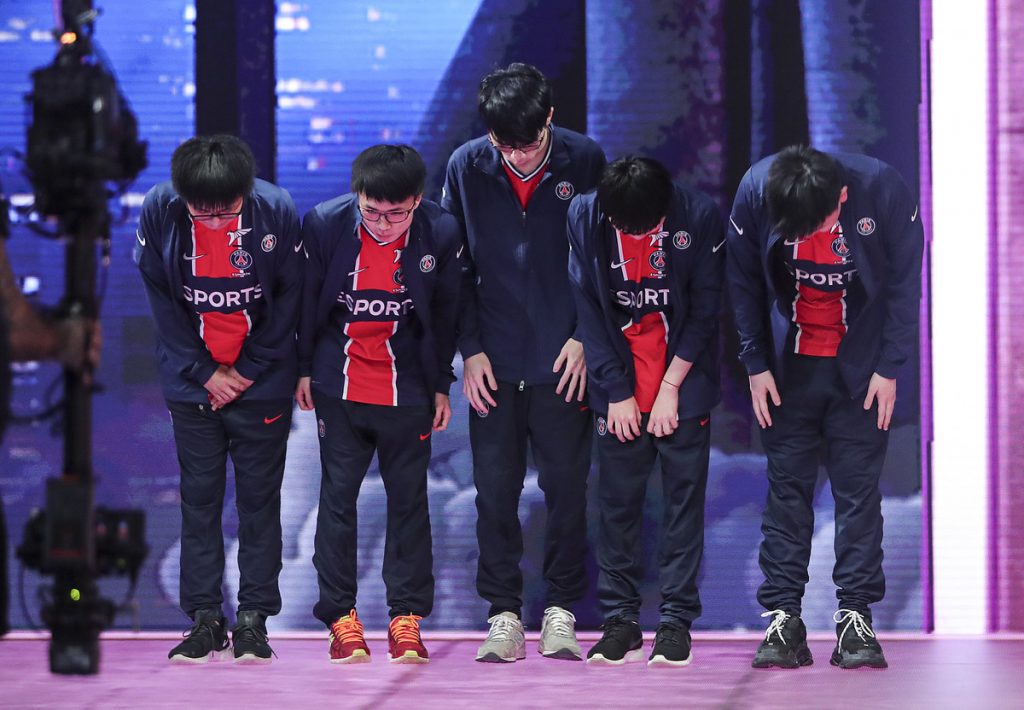 Despite roster issues, PSG Talon took Group B to earn their spot at the Main Event. (Photo courtesy Riot Games)

The 2020 World Championships has finally begun. After a single round robin in Group B, the results from Round 1 of the Play-In Stage are in. PSG Talon have taken the top spot, earning automatic qualification to the Main Event despite their substitute squad. Meanwhile, LGD Gaming had to struggle to survive after a nightmare of a Group Stage. We take a look at the top storylines of the World Championship so far.

The PCS’ first team to play at a World Championship was supposed to be at a major disadvantage. Because of the travel restrictions and visa requirements for entering China, PSG Talon started the tournament with substitutes in three of their five roles. Hsiao “Kongyue” Jen-Tso replaced Kim “River” Dong-woo in jungle, Chen “Uniboy” Chang-Chu replaced Park “Tank” Dan-won in mid, and Machi Esports’ coach Chen “Dee” Chun-Dee came out of retirement to play ADC for Wong “Unified” Chun Kit. Considering the LPL’s LGD Gaming were in their group, it looked like PSG would need to survive the Group Stage and hope to qualify for the Main Event in Round 2.

Official Club Statement regarding #Worlds2020 roster. Thank you for all the support 🙇‍♂️🙇🙇‍♀️#PCSWIN #PCSLOL pic.twitter.com/FdNIVqMy4s

PSG had other ideas. They began their tournament with a commanding victory over Rainbow7 in game one. Kongyue’s Ekko (13/1/8) and Uniboy’s Sett (2/0/15) dominated the middle of the map, while Dee’s Senna (3/3/21) looked like he belonged. But PSG were just getting started. With the confidence of their game one win under their belts, PSG absolutely smashed the LPL’s LGD Gaming to end day one. Playing aggressive and unafraid, PSG once again controlled the middle of the map through their substitutes. Kongyue’s Graves (3/0/7) and Uniboy’s Orianna (7/0/7) led the way to their 16 to 2 kill triumph in 35 minutes.

It wasn’t all perfect, as PSG lost their matchup to Unicorns of Love on day two. PSG matched UoL in kills at 13 apiece, but UoL had a big turret advantage, and Lev “Nomanz” Yakshin held a 100+ CS advantage over Uniboy. Fortunately for PSG, they took care of business against V3 Esports on day three, while UoL lost against Rainbow7 to set up a tiebreaker for the top of Group B.

The Unicorns of Love had a big 6k gold advantage built by another turret lead at 25 minutes, but PSG knew they could win the fights. A four-for-zero ace at 26 minutes led to a Baron take for PSG, bringing the gold back near equal. After taking a pair of turrets, PSG needed just one more big fight to end it. They found that fight at 32 minutes, acing UoL five-for-zero. PSG won 13 kills to 5 in 33 minutes to advance directly to the Main Event. Kongyue’s Lillia (5/1/5) and Uniboy’s Orianna (5/0/6) were once again big factors in the win.

The substitutes got it done in a big way for PSG, but now they’ll have new questions to answer in the Main Event. River and Tank will be cleared from quarantine and will join the main lineup, but will that make PSG better? Kongyue and Uniboy were the best jungle/mid duo in Group B, and that includes Han “Peanut” Wang-ho and Su “xiye” Han-Wei. Unified fit in well when he rejoined on day three, so PSG could continue to transition to their main roster just fine. However, Kongyue and Uniboy have left big shoes to fill for their successors.

As the LPL representative, LGD gaming were supposed to roll over Group B. LGD had the good fortune to avoid Team Liquid and the MAD Lions in their group, meaning they did not have to play up against another team from a major region. Even the PCS’ representative, PSG Talon, had three substitutes. It couldn’t have set up any better for LGD.

But then, the games started. LGD looked incredibly timid in their opener against PSG, the complete opposite we’ve come to expect from a representative of the LPL. At the time the 16-2 loss could have just been considered a fluke as LGD got comfortable in the new environment, but instead it was a sign of things to come.

LGD followed that loss with another stunning loss on day two, this time to Rainbow7. Once again LGD had an early lead based on CS and destroying turrets, but the proactive fights from R7 won them the mid and late game. R7 took their first gold lead as they ended the game, beating LGD 20 kills to 13 in 40 minutes.

LGD finally won their first game on day three against V3 Esports, but they followed it up by losing handily to the Unicorns of Love. After coming into Group B as prohibitive favorites, LGD finished the Group Stage at a miserable 1-3 and were forced into a tiebreaker game against V3 Esports just to avoid fifth and elimination.

To their credit, LGD did what they needed to survive. Peanut’s Graves went 7/1/8 to help LGD beat V3 for a second time and advance to Round 2. LGD capitalized on a very weak draft from V3, but they still need to be given credit for taking advantage of it. At the same time, we didn’t enter the tournament thinking LGD should need praise for beating the LJL’s top team to avoid elimination.

LGD now need to win two best-of-fives in Round 2 to advance to the Main Event. They’ll begin against Rainbow7, a team they’ve already lost to. If they win that, LGD would play the second seed from Group A.

UNICORNS OF LOVE, RAINBOW7 ONTO ROUND 2

Congratulations to @PSG_Talon as we take our 2nd defeat in the Play-Ins.

This means we have to proof ourselve in the Qualification Round to make it to the Main Event!#ThinkPink #Worlds2020 pic.twitter.com/yA4yPhH7xN

The Unicorns of Love looked like the best team in Group B for most of the time, beating PSG Talon in their first matchup. However, a late loss to Rainbow7 forced them into a rematch with PSG. UoL dominated the early macro once again, gaining a large gold advantage without having to pick up kills on PSG. However, UoL got caught out in fights late to throw their lead and will now have to play in Round 2. Because they finished second, UoL will get the winner of the third/fourth place match in Group A. UoL will only need to win that best-of-five to advance.

On the other hand, Rainbow7 looked on their way out of the tournament after their first two games. R7 lost to PSG Talon’s substitute squad in their opener, then followed it up by losing to V3 Esports. At 0-2 and yet to face the presumed favorites of the group, R7 needed to turn things around quickly. Fortunately, R7 did just that. Upset wins over PSG and LGD not only kept them alive, they vaulted R7 over LGD and V3 into third.

Rainbow7 will move onto Round 2 to face LGD Gaming. The two will meet on Tuesday, September 29th at 3 a.m. PST. The winner will advance to face the second seed from Round A for qualification to the Main Event.