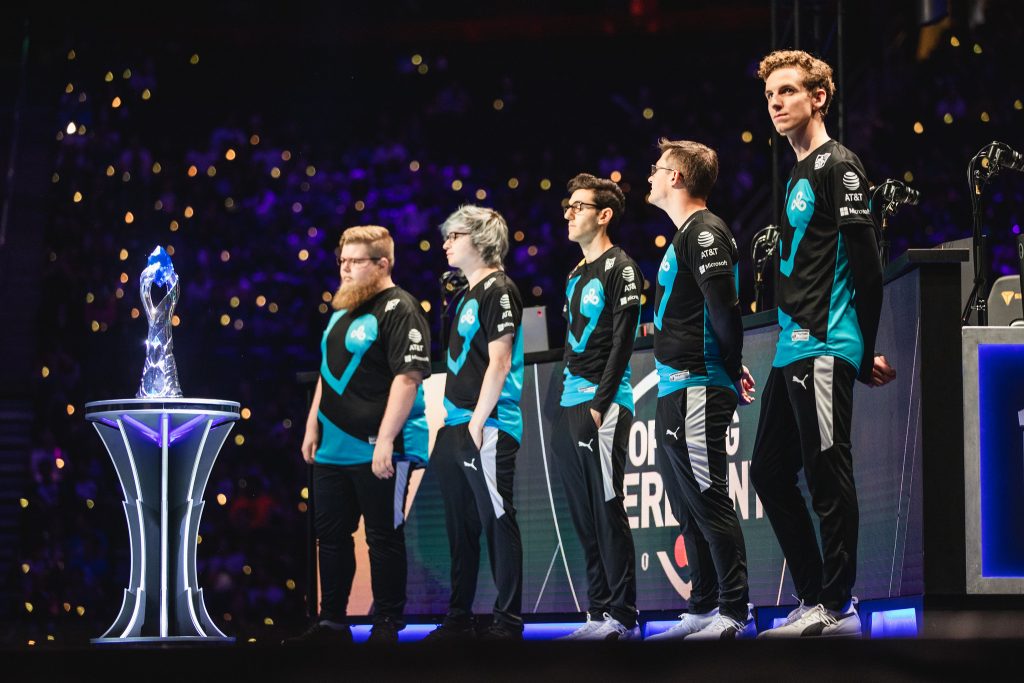 Cloud9 during the 2019 League of Legends LCS Summer Finals at Little Caesars Arena on August 25, 2019 in Detroit, Michigan. (Photo by Colin Young-Wolff/Riot Games)

It wouldn’t be a League of Legends World Championship without Cloud9 making an appearance. Over the years, the North American team have proved they are able to go head-to-head with the best teams in the world, and we have no doubt this year will be any different.

The 2019 World Championship marks the seventh consecutive year that North American team Cloud9 will be in attendance. While Cloud9’s regional success has often been up and down, the team has performed consistently at Worlds by getting out of groups every single year.

In terms of Split performance for 2019, Cloud9 has had a tough but competitive season. Throughout the Spring Split, Cloud9 put on an impressive performance and, joint with Team Liquid, landed on top of the standings. Unfortunately, they narrowly missed out on a finals spot after an intense back-and-forth series with TSM in the semifinals. TSM completed a reserve sweep and left Cloud9 reviewing their performance heading into summer.

For the Summer Split, Cloud9 provided a similarly strong performance during the regular season with a second-place finish. This time around, the team was able to prevail and take down CLG to advance to the finals.

Hosted at the 22,000 capacity Little Caesars Arena, Cloud9 and Team Liquid provided fans with a highly competitive game five series. Ex-Cloud9 mid laner Nicolaj “Jensen” Jensen caused a lot of problems for his previous team, especially as he was able to get his hands-on assassins like LeBlanc and Akali. Cloud9 fought hard but their team fighting let them down, and they finished the series 2-3 to Team Liquid. However, as a consolation prize, Cloud9 officially qualified for the World Championship.

Due to the departure of Nicolaj “Jensen” Jensen and Andy “Smoothie Ta, Cloud9 has often turned to their academy team to help grow and support their roster. Over the last two years, Tristan “Zeyzal” Stidam and Robert “Blaber” Huang have secured a spot on the starting LCS line-up and has enabled Cloud9 to diversify their playstyle. Having a mixture of rookie players with veterans like Zachary “Sneaky” Scuderi has seen the team develop.

Not forgetting, Dennis “Svenskeren” Johnsen who picked up the coveted MVP award for the LCS summer split. Svenskeren was also the only player voted for on the LCS All-Pro first team who wasn’t a part of Team Liquid. His ability to switch between an aggressive early game and supportive playstyle has been key to his and Cloud9’s success.

Cloud9 head into Worlds as the second seed from LCS and therefore don’t have to participate in the play-in stage like the previous three years. With a solid performance in the LCS and a dependable playstyle, there is no doubt Cloud9 will have the ability to add to their Worlds legacy.