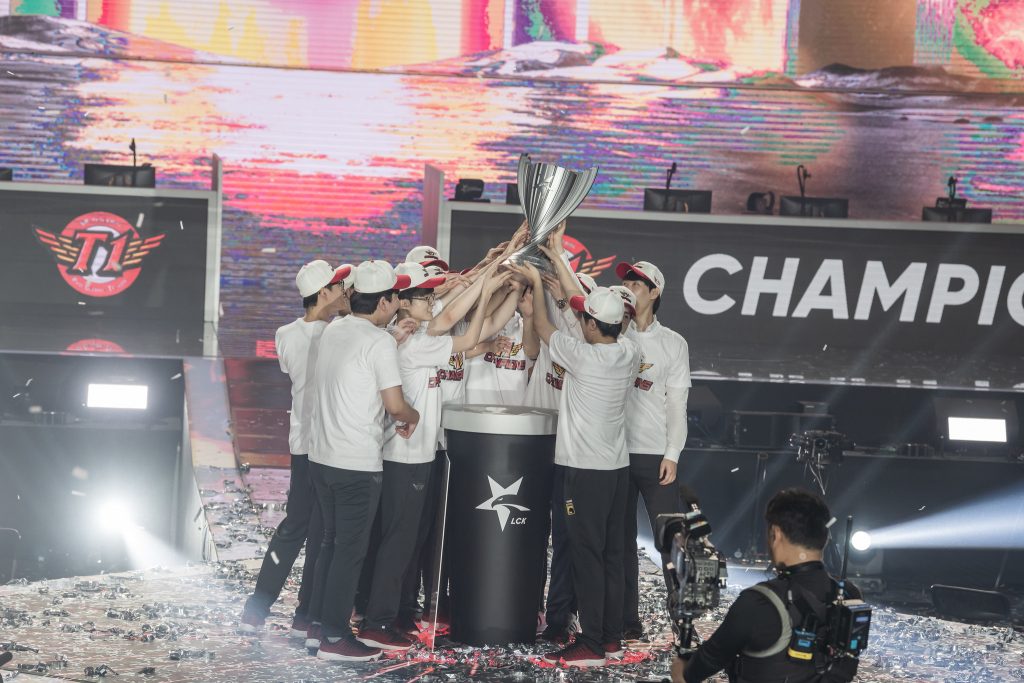 This year only two LCK teams received direct invites to the group stage at the 2019 League of Legends World Championship. Among them are three-time World Champions SKT T1, who head into the event with the biggest point to prove. Will this be the year SKT rise back to their former glory?

For the longest time, Korean teams in League of Legends have set the benchmark for the highest level of play. At the forefront is three-time World Champions SKT, whose dominance seemed unbeatable. However, 2018 marked a time of change when SKT failed to make Worlds and new regions emerged.

Heading into 2019, SKT was ready to come back better and fiercer than ever. Complete with a roster rebuild with a mixture of new talent and veterans, the LCK team was prepared to fight.

Spearheaded by renowned coach Kim “kkOma” Jeong-gyun, SKT started off the 2019 season strong heading straight to the top of the standings. The team continued to find their rhythm and picked up wins resulting in a place in the Spring Split finals. SKT went head-to-head with rookies Griffin in which was supposed to be a highly anticipated series. Although, SKT’s methodical performance saw them 3-0 Griffin and take home an impressive seventh LCK title.

Things took a turn for SKT  T1 when the team headed to compete at Mid-Season Invitational. Despite looking strong in the group stage, even taking down World champions Invictus Gaming, SKT failed to surpass the semifinals.

The team’s poor performance followed SKT back to the LCK as they started the Summer Split with a five game losing streak. Luckily, with some roster switches, SKT was able to gain back their form ending the split 11-7 in fourth place. SKT still had work to do by taking down Afreeca Freecs, SANDBOX Gaming and DAMWON Gaming to head to the finals. With momentum on their side, SKT once again showed Griffin who was boss and took home an eighth LCK title.

For so many years, Lee “Faker” Sang-hyeok was considered the best League of Legends player in the world. With his ability to demand control of the mid lane while supporting his team with his gank threat potential, some may argue he still is. Also, let’s not forget that iconic Zed vs Zed outplay.

With his deep champion pool, Faker tends to excel in ever meta, however, this year’s competitors will be a true challenge. Faker will be going up against the likes of Rasmus “Caps” Winther and Song “Rookie” Eui-jin for the ultimate skill match-up. All eyes will be on the 23-year-old to see if he can return to his past form.

Faker isn’t the only past World Champion who will be looking to make a statement. 2014-winner Cho “Mata” Se-hyeong has been hailed over the years for his legendary shot-calling ability. During the LCK season, Mata has taken a backbench to young support Lee “Effort” Sang-ho. Will the veteran player get the opportunity to go against the best of the best once again?