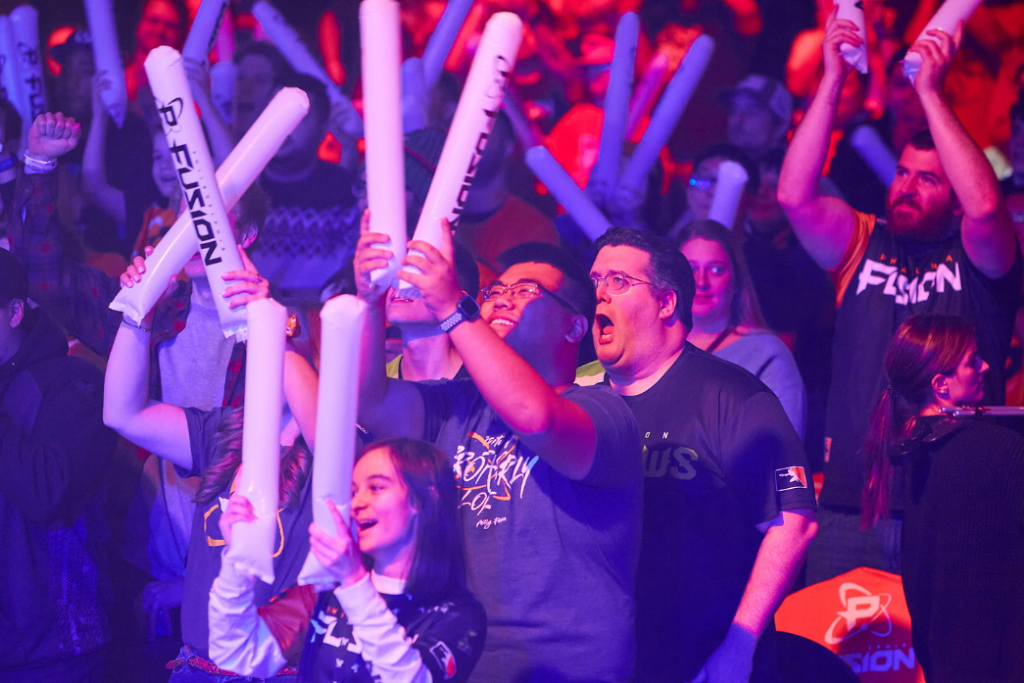 The San Francisco Shock and Shanghai Dragons take the lead in their respective regions for the Summer Showdown qualifiers. (Photo courtesy Steward Volland for Blizzard Entertainment)

The Overwatch League hosted six matches in the Asian Pacific (APAC) region and seven matches in the North America (NA) region as seeding and qualifications for the Summer Showdown continued. LA and Florida clashed with a familiar rivalry, while the Fusion and Shock are tied for first in NA and Shanghai Dragons continue to overtake APAC. Week 20 shared the same hero pool restrictions as OWL week 19, rotating out Brigitte, Sombra, Echo, and D.Va.

The Los Angeles Valiant pulled out an impressive victory over the Florida Mayhem on Sunday, defeating them in a 3-1 series. The series was a much closer affair than the 3-1 scoreline might imply, with the match momentum tipping back and forth throughout the intense series. If you only have time to watch one match from week 19, definitely watch this one.

The DPS cores for both teams hold some of the most impressive stats in the league, but the stand out player in Sunday’s match was Johannes “Shax” Nielsen, who put on a master class in how to play Tracer. Based on Sunday’s performance, Shax may be the best Tracer player in the world. Needless to say, he won Player of the Match.

This match was personal for some of the players, since there is a lot of crossover between the Valiant and the Mayhem rosters. Valiant starting players Jae-ho “RaiN” Park and Caleb “McGravy” McGarvey both formerly played for the Florida Mayhem. Shax also played for the Mayhem Academy team before being picked up by the Valiant. On Florida’s side, Pan-seung “Fate” Koo played for the L.A. Valiant until 2019, when he was signed to the Mayhem. As a result, many players in Sunday’s match faced their former teammates which was an interesting dynamic to see.

The match was also notable because both of these teams have proven themselves top tier contenders over the past month. Following relatively weak starts to their seasons, the Mayhem and the Valiant both somehow secured top four seeds in the May Melee. The Mayhem even advanced all the way to finals where they lost to the SF Shock. If this match up had happened early in Season 3, it would have been considered irrelevant. In week 20, on the other hand, it’s considered a match between two highly-rated teams.

After replacing their entire roster in May, the Titan’s new roster finally secured a victory on Sunday, sweeping the Dallas Fuel 3-0. The victory broke a seven game losing streak for Vancouver. Although the Fuel are not the top ranked team in the Overwatch League, they are still a solid team and defeating them shows that there is indeed life in this new Titan’s squad.

The Titan’s success was led by the elite DPS players of Niclas “ShockWave” Jensen, who they signed in late May. ShockWave was a well respected player in the EU Contenders, but Sunday’s match showed that he is also able to put up fantastic performances in the Overwatch League as well. He was named player of the match for his performance.

One of the reasons for the Fuel’s struggle was that they did not play their star DPS player, Jang “Decay” Gui-un. Instead, the team opted to play newly acquired DPS player Stefan “Onigod” Fiskerstrand. It seems that the Fuel wanted to test out Onigod and get a sense for what he is capable of, despite the match with the Titans being a qualifier match for the upcoming tournament. Onigod had moments of brilliance, but was ultimately no match for Shockwave. To be fair to Onigod, it’s difficult to expect much from a player who was only signed this past week and hasn’t had time to get comfortable with the Fuel’s system and team.

Regardless of the reason for the victory, Sunday’s sweep broke the Titan’s losing streak in convincing fashion.

The San Francisco Shock had a great weekend, winning matches against both the Paris Eternal and the Washington Justice in dominant 3-0 fashion. The Shock have now swept seven series so far in season 3. The Shock not only took the lead in the NA Summer Showdown qualification standings in week 20, they also set multiple records while doing it.

The Shock made history on Saturday, becoming the first and only Overwatch team to ever sweep every single other OWL team. In addition to taking that record, the Shock also set a new record time for the offensive phase on Watchpoint Gibraltar against the Paris Eternal on Saturday, finishing the match with 4:29 left in their time bank.

After their historic accomplishments in the season 2 playoffs, and then their victory in the May Melee, the San Francisco Shock are looking more dominant than ever right now. Their line up is so stacked that Dong-jun “Rascal” Kim, one of the best DPS players in the league, didn’t even see playtime on Sunday. Instead, the Shock ran primarily dive compositions with Nam-joo “Striker” Kwon and Seonchang “ANS” Lee. Imagine being so dominant, you don’t even have to play your star player to crush your opponent.

With each week, the Shock seem to find a new ceiling to shatter on their journey to becoming the most powerful professional Overwatch dynasty in the world.

The Philadelphia Fusion continued their streak of excellence on Sunday, taking their match against the Boston Uprising in a 3-0 sweep. The Fusion have looked strong throughout the season, however they dropped their semi-final match in the May Melee to the Florida Mayhem. Now they are looking to redeem themselves, with their sights firmly set on the Summer Showdown title.

During the match, Jaehyeok “Carpe” Lee continued to make his case for the 2020 MVP award, with an incredible performance on Tracer. He brought in an impressive 16 eliminations/10 minutes throughout the match and landed seven pulse bomb kills over the span of three games. Carpe has looked strong throughout season 3, showing off his ability to play Widowmaker, Tracer, or even Torbjorn at the very highest level.

In a post game interview, Fusion support player Daniel “Funnyastro” Hathaway explained: “[our loss in the May Melee] reminded our team that we hate losing. Everyone has been working super hard, playing lots of ranked, trying to fix the problems we had. It looks like we are on the up and up from here and we should be able to win this tournament.”

The Fusion are currently tied with the Shock for the top seed in the NA region. The two teams will face off next week to break the tie, and finally determine how the Fusion stack up to the Shock.

The Shanghai Dragons won a very close 3-2 series against the Chengdu Hunters on Sunday. The match was surprisingly close, considering the difference in rank between the #1 Dragons and the #17 Hunters, but the victory nonetheless kept the Dragons in the lead of the APAC division with a 2-0 record and a +4 map differential.

Although Chengdu has struggled to find success throughout season 3, they looked surprisingly good on Sunday. They were only a couple points away from taking the series, however, Dragon’s DPS player Byung-sun “Fleta” Kim popped off throughout the series. Fleta’s individual players ended up being the difference between winning and losing the match for the Dragons.

The Shanghai Dragons won the APAC May Melee tournament, and unless something changes they have a pretty good shot at winning it again. They have absolutely dominated the APAC regions throughout season 3 and there are no signs of that stopping anytime soon. Next week they will look to defeat Hangzhou and Seoul to secure the #1 seed for the upcoming APAC tournament.

The Guangzhou Charge defeated two teams this weekend, taking their Summer Showdown qualification score to 2-0 with a 2+ map differential. They started out the weekend on Saturday, defeating the Seoul Dynasty in a close 3-2 series and narrowly avoiding the reverse sweep. On Sunday, the Charge once again won a close 3-2 series, reverse sweeping the Spark. Jung-woo “Happy” Lee had such incredible performances for the Charge in week 20 that he won player of the match for both series in week 20.

The Charge are currently in the second qualification spot behind the Dragons. During the May Melee qualifiers, the Charge managed to claim the top seed and the bye into semi-finals. Retaking the #1 seed would be a long shot, since it would require the Dragons to lose to either the Spark or the Dynasty next week. If the Dragons do end up dropping a match though, the Charge are next in line as the only other team who has not lost a qualification match.

The Charge have gone from a middling team in the APAC region, to being one of the top prospects in Asia in only a couple months. Things can change in a matter of only a few weeks in the Overwatch League, but as of now, the Charge’s future looks bright.

The New York Excelsior defeated the London Spitfire on Sunday in a 3-1 series and lost their match on Saturday in a 2-3 match against the Hangzhou Spark. Since moving to the APAC region, the NYXL have struggled to find their footing, however the team is currently sitting on a respectable 2-1 record with a 4+ map differential for the Summer Showdown qualifier, placing them in third.

In their match against the Spitfire, the NYXL debuted their latest pick up, former titan’s DPS player Hyojong “Haksal” Kim. Haksal won the Overwatch Rookie of the Year award in 2019 and was a great pick up for the NYXL. Although Haksal is still new to the team, that didn’t prevent him from dominating the third map in the series as Mei. His addition could make a serious difference in the NYXL’s chance at winning the Summer Showdown.

Next week the NYXL will face the Guangzhou Charge. A victory there would likely secure them a top three seed in the Summer Showdown and would send a message that the NYXL are indeed a top prospect in Asia.

Looking ahead to week 21

Week 21 of the Overwatch League will be the third and final week of Summer Showdown qualification matches. During week 21’s matches, the hero pools will not be active, which means teams will be able to play whatever compositions they desire. There will be 13 matches in total next week, with six matches taking place in the APAC region and seven matches taking place in the NA region.

In the APAC region, the Seoul Dynasty will face the Shanghai Dragons on Saturday at 3:00 a.m. PDT. That match will be an opportunity for Seoul to redeem themselves and take revenge on Shanghai, after the Dragons defeated the Dynasty in the Grand Finals of the May Melee.

In the NA region, the San Francisco Shock will face the Philadelphia Fusion on Sunday at 4:00 p.m. PDT. The teams are currently tied for the top seed in the Summer Showdown, but only one of them can remain undefeated. Since that match will be the first time the Shock and the Fusion have played in season 3, it will be a good opportunity to see how the two teams stack up to one another.