Charge and Shock on Top of May Melee Seeds 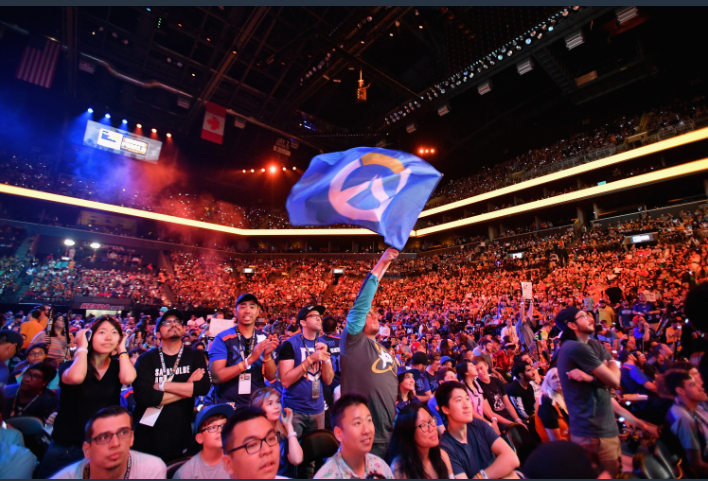 The Shock and the Charge secured the top seeds in their regions for next week's May Melee tournament. (Photo courtesy Blizzard)

Week 15 of the Overwatch League featured 12 intense matches and was the final week of the qualifiers for next week’s May Melee tournaments. Over the past three weeks, teams have been battling it out to determine entry and seeds for two separate tournaments, one in Asia and the other in North America. Week 15 was the last chance for teams to secure their seeding, which meant a number of teams came in with significant stakes resting on their matches.

Next week, the Overwatch League will host the APAC May Melee tournament and the NA May Melee Tournament during Week 16. There will be 12 games in the North American region, spread across Friday, Saturday, and Sunday. In Asia, six matches will take place, with three matches on Saturday and three matches on Sunday.

The Guangzhou Charge played a spectacular May Melee qualifier over the past few weeks, and with their victory on Sunday they successfully clinched the #1 seed for the APAC May Melee tournament.

The Guangzhou Change defeated the Chengdu Hunters in a close 3-2 series on Sunday. Oddly enough, despite their hit-or-miss record in OWL season 3, the Hunters came quite close to defeating the Charge. After the Charge secured the first two maps, the Hunters took the next two, setting up the reverse sweep attempt. In the end, however, Chengdu fell short and Guangzhou took the final map 2-0.

Although they didn’t have a particularly impressive start to the season, Guangzhou absolutely dominated the tournament qualifiers over the past few weeks. The Charge ended being the only Asian team to go undefeated through the May Melee qualifiers, which landed them in the top seed. As spoils for their success, the Charge will receive the round one bye in next week’s tournament. Guangzhou will face the winner of the match between the #4 seeded Hangzhou Spark and the #7 seeded Seoul Dynasty.

Shanghai had a rough week last week, losing a very close match against Dynasty. The loss ended an 8 game winning streak for the team and ultimately prevented them from securing the #1 seed, despite being the most dominant team in the APAC region.

On Saturday, they were able to bounce back and pick up a convincing victory, defeating the London Spitfire in a 3-0 series. With the victory over London, Shanghai moved into the #2 seed in the APAC region. Shanghai will rematch the #6 seed London Spitfire in the quarterfinals of next week’s tournament.

Throughout season 3, the Dragons have absolutely dominated their region. Although they may have missed the top qualification seed, the Dragons have a very good shot at winning the entire tournament. With the Charge on a hot streak, it would not be surprising to see the Charge play against the Dragons in the APAC May Melee grand final match.

The San Francisco Shock defeated their out-of-division rival, the Atlanta Reign, in a dominant 3-0 victory on Saturday. The victory was significant because it was their first rematch since the Shock’s 2019 playoff loss to the Reign. The former champions were able to take their revenge against the Reign, the only team that beat them in their entire 2019 playoffs run.

With Sunday’s win and excellent 3+ map differential, the Shock were able to clinch the #1 seed in the NA May Melee tournament. San Francisco completed qualification with an impressive 3-0 record and a +8 map differential. The Shock are currently 8-2 on the season and have looked really strong in all of their matches over the past month.

Considering the Shock’s reputation, it is not surprising to see them clinch a high seed. The Florida Mayhem, on the other hand, were a dark horse candidate for the #2 seed. Florida started off the season with a 2-4 record over their first six matches. They didn’t look particularly impressive or consistent in the early season, leading many analysts to write them off as irrelevant.

However, in the past month, Florida has really found their stride. Their current record is 7-4, and they convincingly won all three of their qualifying matches. To be fair, they were playing against mostly lower-ranked opponents throughout qualification, but a win is a win. It will be interesting to see if they can continue their win streak in the tournament next week.

The Los Angeles Valiant defeated the Toronto Defiant in a very close 3-2 duel. With the victory, the Valiant claimed an undefeated 3-0 qualifying record which was good enough for a #4 seed. Because they were in the top four seeds, the Valiant will automatically advance to next week’s May Melee quarterfinals.

Much like the Florida Mayhem, the Valiant are a surprising team to find in the top four seeds. Although the Valiant currently sit on a losing record for the season, the team has played really well throughout the qualifiers. They defeated the highly regarded Atlanta Reign in week 13 and ended the qualification period with an impressive +6 map differential.

One key to the Valiant’s miraculous turnaround has been Kyle “KSF” Frandanisa’s incredible DPS performances in game after game. KSF is currently ranked #1 in the Overwatch League for Damage-per-10 Minutes and his flexibility has allowed him to flourish in the Hero Pools meta.

It will be interesting to see what team composition the Valiant chooses to run in the tournament, since Hero Pools will not be a factor. They have been playing some unconventional stuff recently, including being the only team in North America to consistently run Wrecking Ball in their dive compositions. Perhaps we will see more of their Ashe+Hammond dive in next week’s matches.

Vancouver continued to spiral downward this week, losing two more matches. On Saturday, the Titans lost to the Outlaws 0-3. OWL Commentator, Andrew Rush, called the final map of that match “One of the most one sided rounds” he has ever seen. On Sunday, the Philadelphia Fusion soundly dispatched the Titans in a dominant 3-0 victory. Following both 0-3 losses, the Titans were sent all the way down to the #13 seed for next week’s tournament.

To be fair to the Titans, week 15 was only the second week of OWL competition for this brand new roster, most of whom came from the North American Contenders team Second Wind. The addition of the Titan’s new rookie squad to the League has shown just how big the gap between Tier 1 and Tier 2 Overwatch players can be, especially with a team like the Titans, who are scrambling to acclimate to the league mid-season.

The individual mechanical skills of each Titan player are clear to see, however they have struggled to coordinate and execute plays that can win maps and games. Of course, this was only their second week, so things might turn around. If season 3 has taught us anything, it’s that you can never count anyone out too early.

Vancouver will face the Toronto Defiant in the Friday play-in match.

The Fusion defeated the Vancouver Titans easily this week, which brought their qualification record to 3-0 and secured them the #3 seed. However, for many viewers the more exciting story was that Philly finally debuted their Doomfist specialist, Philip “ChipSa” Graham.

ChipSa has been a running meme in the Overwatch League ever since he was signed. He is a streamer and OWL player for the Fusion, who has been on the bench. Chipsa is a Doomfist one trick, who was signed by the Fusion at the start of season 3. Soon after Chipsa joined the Fusion, Doomfist received several nerfs making him less powerful. As a result, there has been no need for him. That is, until this week when he finally made his debut.

Although he only played for one map, the viewers were still ecstatic to finally see Chipsa show off his top tier Doomfist in an Overwatch League match. It is unclear when we will see him again, but at least he got to debut. 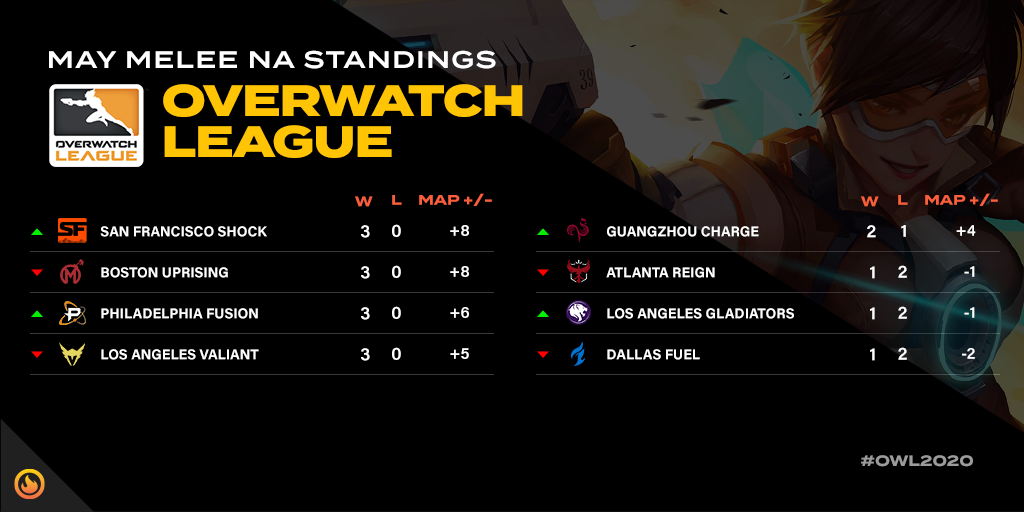 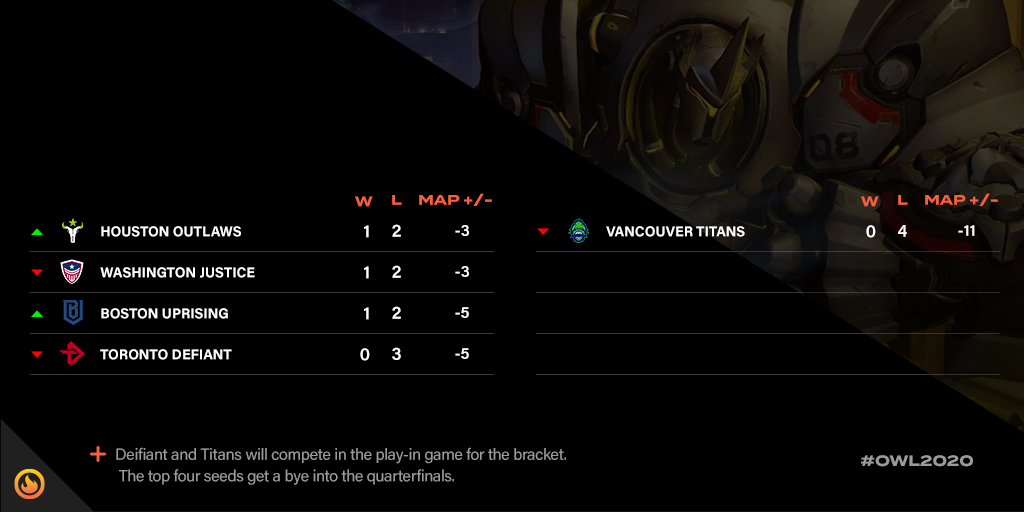 On Friday, the bottom ranked Toronto Defiant and the Vancouver Titans will compete in a play-in match to determine which team will enter the tournament. Whoever wins that match will enter the Friday Knock out series, in which the 5-8 seeds will play the 9-12 seeds, with the winners of each match advancing to the quarter-final bracket on Saturday.

The teams with high seeds will be able to select their opponents for quarterfinals, those selections will be held live on the Watchpoint show after Friday’s competition. 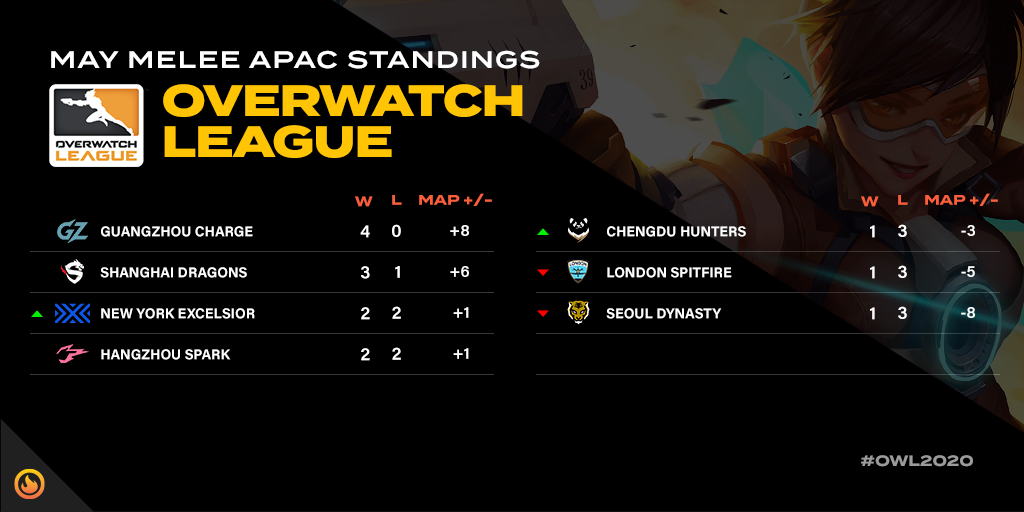 Guangzhou Charge and Shanghai Dragons secured the #1 and #2 seeds for the APAC tournament which is scheduled to take place next week. The #3 seeded New York Excelsior and the #4 seeded Hangzhou Spark round out the top four seeds. The Overwatch League will host three partial quarterfinals matches on Saturday, followed by the semi-finals and grand finals on Sunday. The Charge will receive a bye straight into Sunday’s semi-finals due to there only being 7 teams in the region.