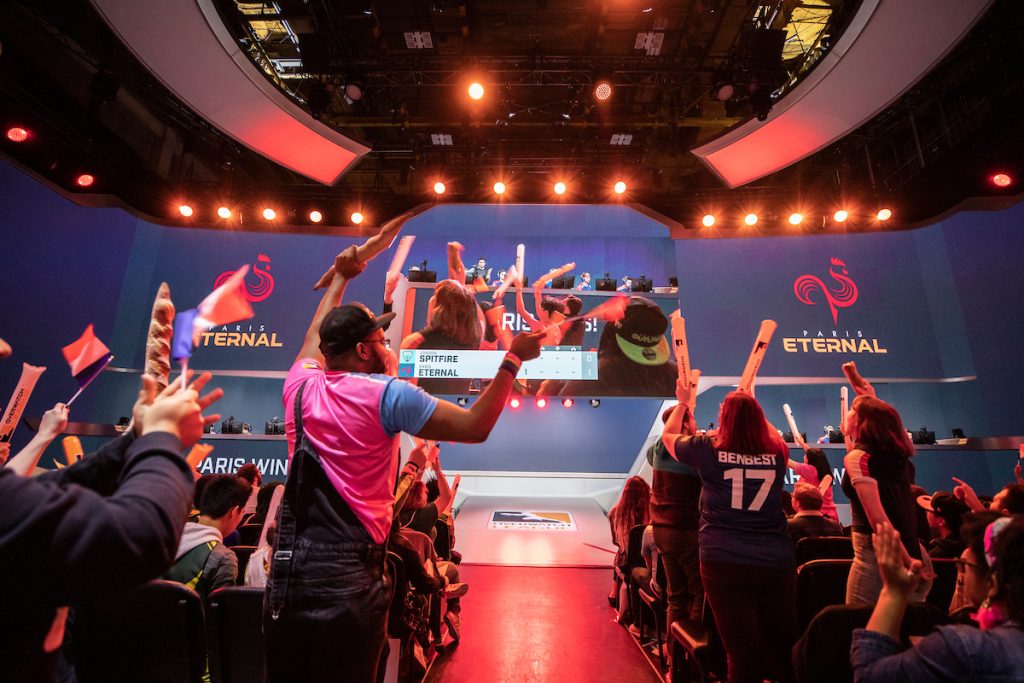 The second week of Countdown Cup qualifiers took place this weekend. On Sunday, the Paris Eternal claimed the lead in the North American region while Chengdu surprisingly pulled ahead in the APAC regional qualifiers, despite being ranked dead last in the APAC season standings.

Orisa, Ana, Mei, and Widowmaker remained unavailable in the Hero Pool this week. With Orisa out of rotation, this week’s meta continued to privilege dive-centric compositions with an ongoing emphasis on Genji, Tracer, and Zarya. Notably, some teams such as the Dragons and the Fusion played Sombra to counter Genji, instead of fielding their own Genjis.

The Paris Eternal continued to impress on Sunday, crushing the L.A. Gladiators in a 3-0 series. The victory was the third sweep victory in a row for Paris during the Countdown Cup qualifiers. Paris currently hold first place in qualification with a 3-0 record and +9 map differential.

Paris Eternal has drastically improved their position in the Overwatch League over the past couple of months, exploding to the front of the North American division during June’s Summer Showdown tournament. During that tournament, they defeated the San Francisco Shock and the Philadelphia Fusion in consecutive playoff matches to claim their first OWL title. They managed to continue that momentum into the Countdown Cup qualifiers.

In their match against the Gladiators, Yeong-han “SP9RK1E” Kim further made his case for rookie of the year, playing possibly the best Genji in the league. However, it was Han-been “Hanbin” Choi who carried the victory on Sunday. Hanbin played a very aggressive Zarya, repeatedly invading backlines to disrupt Gladiator retreats and kill supports. His constant pressure was very effective in shutting down L.A.’s ability to set up plays with their dive compositions.

The two primary keys to Paris Eternals’ incredible success over the past few weeks has been their flexible mechanical skills and their flawless execution of plays. Although Paris have always been a decent team, their technical execution of a diverse set of strategies has improved substantially over the course of season 3, elevating them to be one of the greatest threats in North America.

After a seven game loss streak through May and June, Chengdu finally picked up a win last week against the New York Excelsior. This week they were able to add two more wins, moving to 3-0 with a +5 map differential in the Countdown Cup qualifiers. On Saturday, The Hunters defeated the Seoul Dynasty in a very close 3-2 contest. They followed up that performance with a more convincing 3-0 sweep victory against the Hangzhou Spark on Sunday.

In the past two weeks, Chengdu’s has nearly doubled their total wins for the entirety of season 3. Believe it or not, due to their undefeated qualification record, the Hunters are now in first place for the APAC division Countdown Cup qualifiers. Although they will likely be overtaken by the Shanghai Dragons next week, holding a 3-0 record in qualification is still an impressive accomplishment for any team, especially one who has struggled mightily like Chengdu.

The Hunters have really come into their own during the revived dive meta. Genji expert Yi “JinMu” Hu hasa finally been able to show off his world class Dragonblade skills, after patiently waiting nearly two years for Genji to return to the meta. Perhaps even more impressive than JinMu’s Genji has been Ding “Ameng” Menghan’s contributions on Wrecking Ball. The Spark, Dynasty, and Excelsior all failed to answer Ameng’s unconventional and highly technical use of Wrecking Ball, and each team paid the price. The return to dive has breathed life back into this struggling team.

Chengdu appears to be picking up steam on the back of their Hammond centric dive compositions. It will be interesting to see if these aggressive dive compositions continue to work for them when Orisa returns to the hero rotation.

After playing their Main Tank Mathew “Super” Delisi in the Genji role last week, the Shock debuted their new Genji recruit who they signed this past week, Japanese-American Flex DPS Sean Taiyo “ta1yo” Henderson. He is a top tier Overwatch player who is known for his unconventional crosshairs and his highly flexible DPS capabilities. Throughout their matches on Friday and Saturday, Ta1yo and Striker played Genji and Tracer, a combination which worked to great effect throughout the weekend.

The Shock started their weekend strong, defeating the Florida Mayhem 3-1. The Mayhem looked really strong for a few weeks back in May, however they have struggled to adapt to the new Genji and Tracer focused meta. Part of the issue is that their Genji expert, Jun-ki “Yaki” Kim, is also their Tracer expert. This makes it difficult for the Mayhem to run both heroes at the same time, a limitation which severely harmed them against the Shock.

On Saturday, the Shock easily rolled over the Vancouver Titans in a 3-0 sweep. Ta1yo once again played Genji most impressively throughout the match. However, the Shock did bring in their maintank Super to play Genji on Hanamura. Not only did the Shock win that match, they ended up setting the record for the fastest OWL map time ever. Considering Ta1yo is their new star Genji, it was hard not to read the Shock putting Super on Genji as some friendly disrespect towards Vancouver.

With Ta1yo looking so strong on the Genji against the Mayhem and the Titans, San Francisco appears to have fixed their primary weakness from the Grand Finals of the Summer Showdown.

After not playing last weekend, the Dragons got off to a strong start this weekend by winning both of their matches. The Dragons are on a warpath to reclaim their hegemony in the APAC region, after the Guangzhou Charge unseated them from power in the Summer Showdown Grand Finals.

Their weekend got off to a bit of a slow start, with Shanghai only barely defeating the London Spitfire in a 3-2 contest. Shanghai took the first two maps in the series, setting themselves up to sweep, but the Spitfire made a comeback in the second half nearly reverse-sweeping the much higher ranked Dragons roster. However, the Dragon’s were able to bring it back in the final map to win the series.

Sunday’s match against the Seoul Dynasty was a much more decisive affair, with the Dragons defeating the Dynasty in a 3-0 sweep. The match ended up being strategically mirrored, with both teams playing the same compositions. However, Shanghai’s players very straightforwardly outplayed Seoul’s players, showing why they are still considered the best team in Asia.

In both of their matches this weekend, the Dragons favored playing Jae-won “LIP” Lee on Sombra to shut down Genji dives, rather than choosing to run a Genji of their own. In Saturday’s match Byung-sun “Fleta” Kim did briefly play Genji, however throughout the majority of their maps they played in week 25, the Dragons put Fleta on Tracer and Lip on Sombra. It will be interesting to see if they continue to play the Sombra dive next week.

New York Excelsior redeem themselves against the Charge

After losing in embarrassing fashion to the Chengdu Hunters last week, New York redeemed themselves by defeating the reigning Summer Showdown champions, the Guangzhou Charge. The 3-0 sweep victory over the Charge was also sweet revenge for New York, since the Charge swept the NYXL last month to eliminate them in the semifinals of the Summer Showdown.

Former Titans player and 2019 rookie of the year, Hyojong “Haksal” Kim, was named the player of the match for his Genji performance. He proved himself to be the superior Genji throughout the series, dealing more damage and building blades faster than his counterpart on the Charge, Ou “Eileen” Yiliang. Haksal’s sheer mechanical skills on Genji show why he is considered one of the best dive DPS players in the world.

The NYXL has been relatively quiet since joining the APAC division. They were eliminated in semifinals by the eventual winners of both the May Melee and the Summer Showdown. Based on Saturday’s performance, they may be positioned to go to the Grand Finals and even win the Countdown Cup. In this Genji dominant meta, it is difficult to ignore a Genji who plays as well as Haksal. And of course, you can never count out the NYXL in post-season matches.

The Philadelphia Fusion picked up two wins this weekend, defeating the L.A. Gladiators in a close 3-2 match on Saturday and defeating the Toronto Defiant 3-0 on Sunday. With the essential wins under their belt, the Fusion are off to a strong start to their Countdown Cup qualification.

In Saturday’s match, the Gladiators played Flex DPS player Gia Huy “Chris” “MirroR” Trịnh on the Zarya, and played the recently acquired Kevin “kevster” Persson on Genji. Kevster is a long time Contenders player who is consistently a top ranked player on the Overwatch ladder as well. He was signed by the L.A. Gladiators in June to, in part, serve as their Genji specialist.

The Fusion’s match against the Gladiators started out poorly. The Gladiators controlled the first half, outplaying the Fusion at every turn and ending the half with a 2-0 scoreline. The match was looking like it could be a 3-0 sweep for the Glads.  However, Philadelphia is 19-2 for a reason.

Philly made strong changes at the half, subbing out Isaac “Boombox” Charles for Daniel “FunnyAstro” Hathaway and Josh “Eqo” Corona for Hee-Su “Heesu” Jeong. It was clear they were switching to plan b. Rather than playing Eqo on the Genji, a strategy which was not working, the Fusion switched to relying on Heesu’s Sombra to shut down Kevster’s Genji and the rest of the Gladiators team. This strategy ended up working, and speaks to the importance of adaptation in Overwatch League matches.

Looking ahead to week 26

Next week the gloves will be coming off, along with hero pool restrictions. Orisa will return to the hero rotation and we will get a preview of what team strategies might look like in the Countdown Cup in two weeks.

In the APAC division, the Dragons will be looking to once again claim the top seed. Chengdu is the only team who is currently undefeated, so as long as the Dragons can win against the NYXL next week by more than one point, they should be able to earn the APAC Countdown Cup top seed and bye into semifinals.

In the NA division, Paris Eternal will play against the Washington Justice. San Francisco trails by one map in qualification rankings, so Paris can perform equal to or better than the Shock, they will be able to secure the top seed in the NA region’s Countdown Cup.