Genji Shows Out In First Week of Countdown Cup Qualifiers 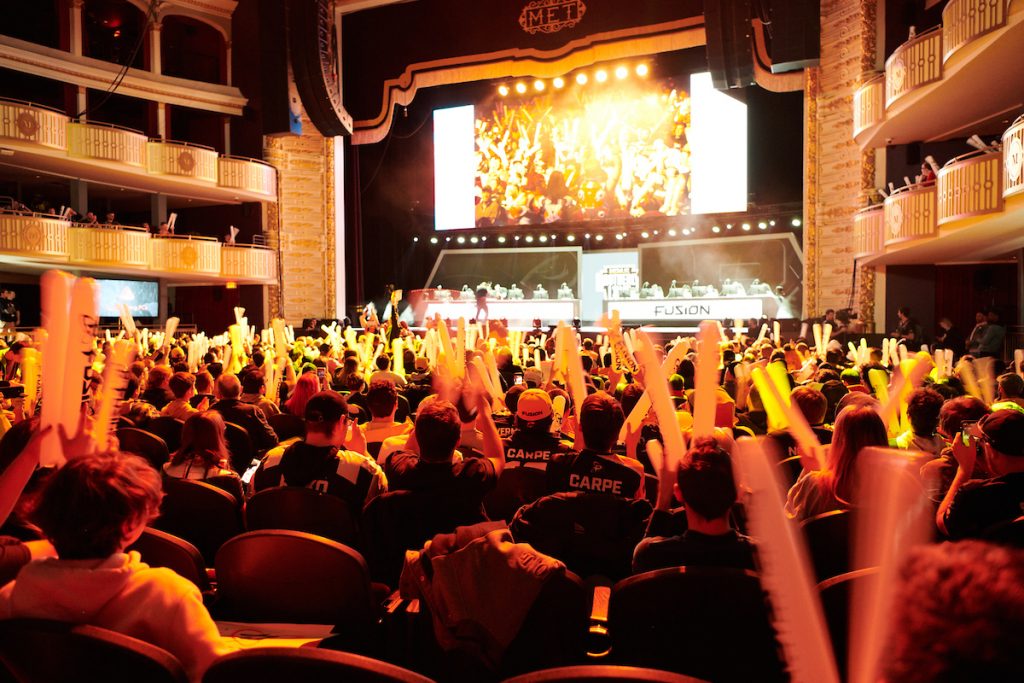 After taking a break last week, the Overwatch League returned to action this weekend for the first round of Countdown Cup qualification matches. The Summer Showdown was full of surprises in both the North American and the Asian Pacific region, with the Guangzhou Charge dethroning the Shanghai Dragons to win the APAC title and the #8 seeded Eternal defeating the Shock and the Fusion to win the NA title. So heading into the Countdown Cup and the OWL Season 3 playoffs, it feels like just about anything could happen.

The hero pool for this week and next week rotated out Orisa, Ana, Mei, and Widowmaker. The meta continued to revolve around Tracer and Genji dive compositions.  The competitive meta over the past month has been reminiscent of the dive meta from OWL season one, even before the Hero Pool removed Orisa, who is the current primary non-dive tank.

The Paris Eternal defeated both the Vancouver Titans and the Toronto Defiant in dominant fashion, taking both matches in 3-0 sweeps. With the two convincing victories, Paris is already off to a terrific start in qualification for the upcoming Countdown Cup. Coming off of their championship win in the Summer Showdown, the Eternal are now looking to defend that crown and set themselves up for success in the upcoming tournament and playoffs.

On Friday, the Eternal kicked the weekend off playing against the Titans. The Eternal last played against the Titans in the quarterfinals of the Summer Showdown, where they defeated them 3-1. During Saturday’s match Paris controlled the pace and economy of the game, while also outplaying the Titan’s team on an individual basis. The Titans team, which is made up entirely of rookies, has struggled to find their footing in the OWL so far and this weekend was no exception. They ended up losing both their series on Friday and their series on Saturday in 3-0 contests.

On Sunday, the Eternal went against the Toronto Defiant. The Defiant are better than their 13th overall season ranking suggests, having defeated both the Atlanta Reign and the L.A. Valiant to earn a spot in the semifinals of the Summer Showdown, where they lost to the San Francisco Shock. However, the Defiant were no match for Paris on Sunday, who were able to secure another undefeated series victory. The match was closer than the scoreline suggests, but Paris’ performance was further testament to just how dominant the Eternal are in the current OWL meta.

Although neither the Titans nor the Defiant are the strongest opponents, the victories will contribute to an excellent qualification record, as Paris pursues a high seed, and perhaps a first round bye, in the Countdown Cup.

Dallas Continues to Dominate their Rivalry with Houston

Neither the Dallas Fuel nor the Houston Outlaws present the most dangerous roster in the Overwatch League. Nonetheless, whenever they play against each other there is a special energy. The two teams, who both hail from Texas, are de facto regional rivals, who have even been featured in Lone Star Showdown TV Series broadcasts outside the Overwatch League. However, Dallas sure has dominated the rivalry this year.

The Dallas Fuel entered week 24 with a 2-0 record against the Outlaws, and they were confident that they would repeat that accomplishment on Friday. For their part, Houston entered Friday’s match with a little bit of momentum after defeating the much higher ranked Florida Mayhem in the knockout rounds of the Summer Showdown. However, it was Dallas who brought home the win in a very close 3-2 series. Dallas is now 3-0 over the Outlaws this season.

The San Francisco Shock unsurprisingly rolled over the lowly Boston Uprising in a 3-0 sweep on Saturday. The Shock were coming off the heels of a devastatingly narrow loss to the Paris Eternal in the Summer Showdown. The team is now working hard to reclaim their legacy as the undisputed champions of the North American division in the Countdown Cup.

During the Summer Showdown, the biggest challenge the Shock faced was that they didn’t have a strong dedicated Genji player they could rely on. In such a Genji-dominated meta, this became a serious issue and was likely the deciding factor between them winning and losing their Showdown semifinal match against the Eternal.

This week the Shock sought to remedy their Genji gap by debuting their new Genji expert: Main Tank player Matthew “Super” DeLisi. At first, folks thought that Super playing Genji was some sort of joke designed to stunt on the floundering Uprising roster. However, as the game went on it became increasingly clear that Super has been unironically grinding Genji and is currently the Shock’s best hope for Genji-centered team compositions.

In the post-game interview, Super confirmed that this was the team’s actual plan. Super is one of the best Reinhardt players in the league, however, recently the meta has been so dominated by Orisa and Winston that the Shock have been playing  Myeong-hwan “smurf” Yoo in their main tank position. Considering the positive results from Super’s Genji play against Boston, we can probably expect to see him playing in the DPS position for at least the current meta.

The Atlanta Reign showed signs of life against the L.A. Valiant on Saturday, defeating them in a 3-0 blitz. Saturday’s match was the first match the team played since Andrej “babybay” Francisty’s retirement on Friday. Babybay was a starting DPS player, so there were some questions as to who would be taking his place on the starting roster. For this week, the Reign elected to play Tae-hoon “Edison” Kim on Tracer along with Joon “Erster” Jeong on Genji.

During Saturday’s match, Edison and Erster both shone brightly, ending the match with 42 final blows each. Their excellent performances came in spite of the fact that the two have rarely played together in full OWL competition. After such a dominant performance against the Valiant, it’s clear that the Reign are still a force to be reckoned with, even without Babybay.

Jun-ki “Yaki” Kim continued to impress with his high level Genji, a hero the Mayhem will be relying heavily upon in the coming weeks. However, it was Sang-bum “BQB” Lee’s Ashe plays that made the biggest difference in shutting down the Reign. Throughout the match, BQB consistently dominated duels against Edison’s Tracer, often without needing support from healers or tanks. These duels dealt significant harm to Edison’s ability to find value throughout the match, which in turn crippled the offensive power of Atlanta’s dives.

After their shaky performance against the Houston Outlaws in the Summer Showdown, Florida showed great improvement and much more promise in their match on Sunday.

After their excellent performance in the APAC Summer Showdown, the Guangzhou Charge got off to another decent start in qualification on Friday, defeating the London Spitfire 3-1.

The Charge continued to see amazing things from Ou “Eileen” Yiliang’s unstoppable Genji plays, however, it was Ki-cheol “Cr0ng” Nam who earned the title player of the match. Cr0ng stood out in this match in particular because the Charge’s main tank Seung-pyo “Rio” Oh often looked lost and ended up out of position. Cr0ng stepped up to compensate, pulling the team together, and ultimately enabling them to succeed.

Hangzhou Spark had a great performance in their first Countdown Cup qualification match against the Seoul Dynasty, defeating them in a 3-0 sweep. Throughout the season Seoul and Hangzhou have traded wins back and forth. After the Spark’s victory on Saturday, the record between the two teams is now tied 2-2 on the season.

It is hard to isolate who the big playmakers were for the Spark, simply because their entire line up played well throughout the match. Sung-jun “QoQ” Yu showed off his world class Zarya plays, in both dive and barrier compositions, Architect performed very well on Tracer, and the support core were on point.

Seoul, on the other hand, struggled to stabilize their team compositions. Joon-yeong “Profit” Park played Genji at the start of the series, then no one played Genji, then Je-min “ILLICIT” Park played genji the rest of the match. Throughout the match it felt like Seoul was still trying to find a composition that works for them.

After seven losses in a row, the Chengdu Hunters finally managed to pull off a win against the New York Excelsior on Saturday. The Hunters, who are currently sitting on an abysmal 4-14 record, came back from a 0-2 deficit to reverse sweep the NYXL.

The Hunters got off to a terrible start in Saturday’s series, losing the first two games of the match by a wide margin. On the first map, Yi “JinMu” Hu was playing Pharah, a hero who isn’t anywhere near the meta in NA or APAC. Throughout the match the Hunter’s compositions continued to evolve, eventually landing with JinMu playing the Genji and Huang “leave” Xin playing Ashe.

The biggest factor in the Hunter’s victory was their tank duo, Ding “Ameng” Menghan and Ma “LateYoung” Tianbin. Ameng played Wrecking Ball, while LateYoung played Zarya. Together, Ameng and LateYoung made the Wrecking Ball dive composition work really well, even against Dong-gyu “Mano” Kim’s legendary Winston, which has been the gold standard in dive tanking since the inaugural season.

However, the truth is that Chengdu didn’t really win this series so much as the NYXL lost it. The NYXL made mistake after mistake in the second half of this series. Most notably, their Lucio, Taesung “Anamo” Jung, inexplicably died with ult right before the final team fight, thus sealing the Excelsior’s fate.

In the APAC region, the Shanghai Dragons will return to competition against the London Spitfire on Saturday and the Seoul Dynasty on Sunday, as they look to claim redemption after losing the Summer Showdown Grand Finals to the Charge.

In the NA region, the Philadelphia Fusion will face the L.A. Gladiators on Saturday and the Toronto Defiant on Sunday. They are also in search of redemption, after an OWL title once again eluded them in the Grand Finals of the Summer Showdown.