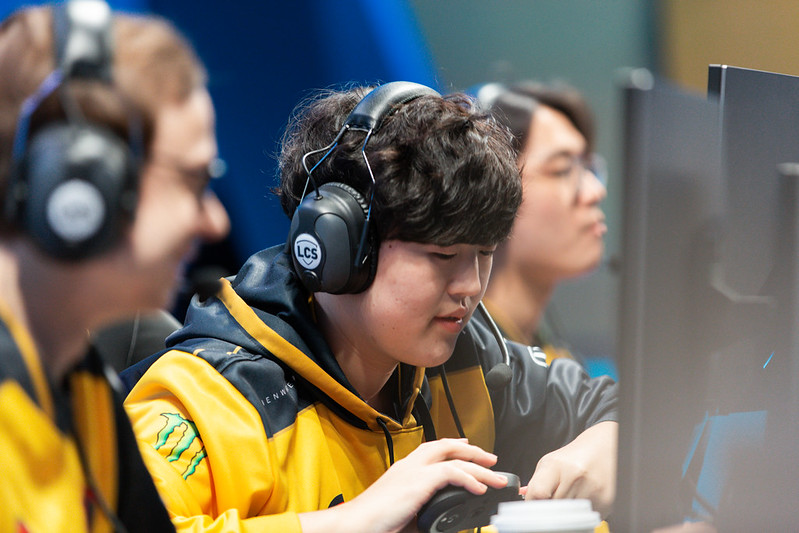 The LCS returned with a new schedule for week one of the 2020 Summer Split. Monday Night League has permanently moved to Friday, allowing the week to wrap up on Sunday.

Team Liquid had a great start to their Summer Split, going 2-0 and taking First Blood in their heated rivalry with TSM. Meanwhile, Cloud9 continued to show why they’re the best team in the league. We take a look at where things stand in the LCS by looking at the top storylines so far in North America.

We didn’t have to wait long to see the first matchup between Yiliang “Doublelift” Peng and his former teammates. Team Liquid and TSM faced off in both teams’ opening game of the Summer Split. Unfortunately, the game didn’t live up to the hype. Team Liquid obliterated TSM in a 25 minute stomp to start the season 1-0.

Team Liquid look to have stepped up their coordinated aggression during the break. Mads “Broxah” Brock-Pedersen’s Trundle was active early, securing First Blood for TL and helping Edward “Tactical” Ra and Jo “CoreJJ” Yong-in win their matchup against Doublelift and Vincent “Biofrost” Wang.

On the other side, TSM did not look coordinated in the early going. Attempting to contest an Ocean Drake take by TL at seven minutes, Søren “Bjergsen” Bjerg’s Syndra and Mingyi “Spica” Lu’s Kayn had to flash away from Nicolaj “Jensen” Jensen’s Shurima Shuffle. Biofrost’s Taric pincer from bot lane was then left out to dry, giving over an easy First Blood to Broxah. Doublelift’s Kalista flashed away to seemingly end the fight, but TSM had other ideas.

Bjergsen and Spica re-joined the fight and moved forward aggressively on TL’s now three-man unit. Bjergsen walked far ahead of Spica and Doublelift to look for a kill on Tactical’s Aphelios, but he didn’t have the damage and died for the attempt. Sergen “Broken Blade” Çelik’s Aatrox then teleported in late, only to run away and blow his flash to escape.

That blunder was probably the most proactive play that TSM made all game. Once behind, TSM turtled up and watched TL push down their turrets and take everything on the map. A big part of that problem for TSM was Spica’s Kayn not hitting his transformation until 23 minutes into the game. The game lasted 25 minutes. Spica was Rhaast for approximately two minutes of game time.

Even though Spica and TSM had a rough opening, it was still a great day to be a Tactical fan. Doublelift’s replacement was the star of the game, going 7/0/6 on Aphelios for 100% kill participation. He also dealt 22.6k damage to champions for a whopping 50% of his team’s damage share. That’s about as good as it gets for a season debut.

Both Team Liquid and TSM went on to win their second games of the week. TL came back from a 4k gold deficit at 33 minutes to beat Golden Guardians 12 kills to 6 in 40 minutes. TSM quickly and easily dispatched Dignitas 13 kills to 2 in 25 minutes.

The two teams will have their final meeting of the regular season on the final day of week nine.

Coming off a historic Spring Split, there was no question who would be the favorite in the LCS this Summer. Cloud9 were so far ahead of the rest of the North American teams, it’s probably more useful to think in terms of how close one of the other teams can get to C9’s level, rather than wonder if any team can actually surpass them. C9 also have the benefit of keeping their roster intact at a time other contenders like Team Liquid and TSM are going through roster and coaching changes.

This trio right here. From now on, we are calling them "The Fiesta Makers".#C9LoL take down @FlyQuest in the first match of the 2020 #LCS Summer Split! #C9WIN pic.twitter.com/VrJphHLqKP

They got to kick off their Summer Split with a rematch of their Spring Finals opponent, FlyQuest. FlyQuest got off to an early four kills to one lead, but that’s no problem for C9. Robert “Blaber” Huang’s Olaf won a duel with Lucas “Santorin” Tao Kilmer Larsen’s Lee Sin in the river, immediately erasing the early gold deficit and securing C9’s second drake. Eric “Licorice” Ritchie’s Jayce pressured Colin “Solo” Earnest’s Sett off his turret top, allowing C9 to take a gold lead through early turrets.

Once C9 gets the gold lead, it’s over. C9 secured an early 22 minute Infernal Soul, powering up their Jayce, Leblanc, and Aphelios. A pair of Barons and an Elder Drake were enough for C9 to close the game up 17 kills to 11 in 31 minutes. FlyQuest’s only objective taken the entire game was a single turret at 20 minutes.

With FlyQuest dispatched again, C9 moved on to an easier opponent in 100 Thieves. 100T were able to take a Rift Herald and one drake in addition to one turret, but they were heavily out-killed on the map. C9 led 14 kills to 2 in their sub-26 minute win. On a team with Ezreal and Yuumi, Licorice’s Gangplank actually dealt the highest damage in the game with 14.3k.

So through two games, C9 have already easily beaten their Finals opponent and the third place team from the Spring Split regular season. What else could you expect from a team that went 25-2 in Spring and earned all five spots on the All-Pro first team? Evil Geniuses and Golden Guardians have the unpleasant task of facing C9 in week two.

Immortals fell just short of a playoff spot in the Spring Split, so it wouldn’t have been a surprise if they decided to make a roster tweak or two before heading into the Summer. With that said, I don’t think anyone could have seen them benching Jake “Xmithie” Puchero to start the season. Xmithie was the centerpiece that IMT built their new roster around as they re-entered the LCS in 2020. Even if Xmithie had a down split, nobody on the outside of the organization would have pointed to him as the problem on a team that finished eighth in the LCS.

Starting rookie Nicholas “Potluck” Pollock in his place makes sense if the goal is to develop younger players this season, but the rest of the starting lineup is littered with veterans like Paul “sOAZ” Boyer, Jérémy “Eika” Valdenaire, Johnny “Altec” Ru, and Austin “Gate” Yu.

Whatever their motivations were, IMT’s new lineup did not get off to a great start. You could call their opening loss to FlyQuest expected, considering the difference in finish in the Spring Split. FlyQuest took an easy 19 kills to 6 win in 31 minutes.

The subsequent loss to Counter Logic Gaming, however, is a different story. CLG were easily the worst team in the league in Spring and made no roster changes going into Summer. IMT built as large as a 2.7k gold lead at 18 minutes, but a three for zero fight at 20 minutes nullified their gold lead. CLG then took back-to-back four for zero team fights to blow the game open at 28 minutes. Potluck actually looked fine in this game and out-pressured Raymond “Wiggily” Griffin’s Trundle early, but the rest of his team struggled.

IMT will have to decide what they want to get out of the rest of the split. Do they think week one was an aberration, or is a loss to CLG a wake up call that the current roster isn’t playoff caliber? It would make sense to call up more rookies with an eye toward 2021, but IMT’s Academy team is also littered with veterans. Only mid laner David “Insanity” Challe has yet to get an opportunity in the LCS. With both of their rosters built to win now, IMT will have to find the right mix of veterans to get back into the playoff picture. 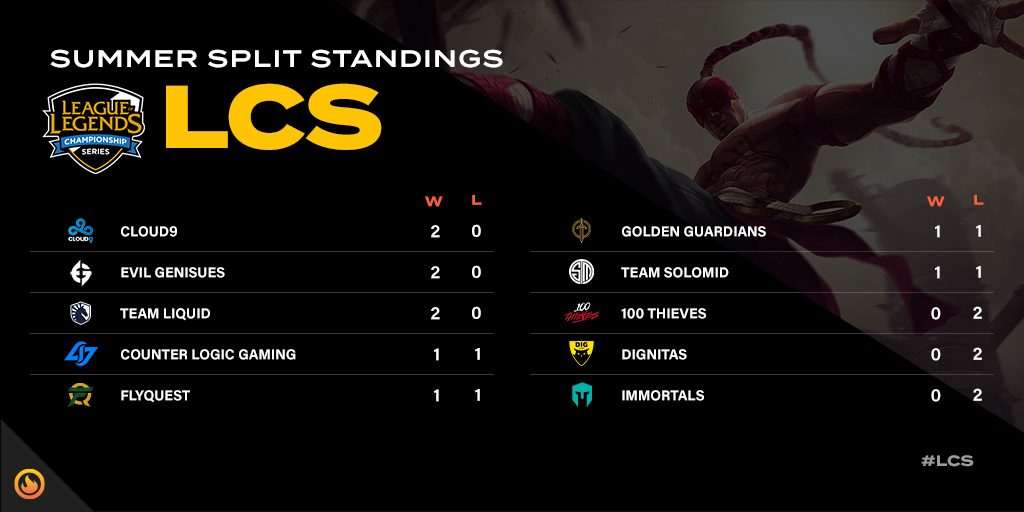 This battle of 2-0 teams is a rematch of Round 2 of the Spring playoffs. Evil Geniuses were the only team to take a game off C9 in the playoffs, so they have shown the potential for an upset. They will look for imports Daniele “Jiizuke” di Mauro and Bae “Bang” Jun-sik to do the heavy lifting. C9 have strength everywhere, but Spring MVP Blaber is playing on a different level than the rest of the LCS right now. He’ll get another matchup with his former C9 teammate Dennis “Svenskeren” Johnsen.

The other battle of 2-0 teams, Team Liquid look to keep their momentum going in what they hope will be a bounce back split. Tactical and CoreJJ dominated Doublelift and Biofrost, so they should have an edge over the weaker laning of Bang and Tristan “Zeyzal” Stidham. Playing on red side, Evil Geniuses will probably want to save the final counter pick for Jiizuke against Jensen. That should leave Jung “Impact” Eon-yeong the ability to counter pick Colin “Kumo” Zhao, if he wants it.