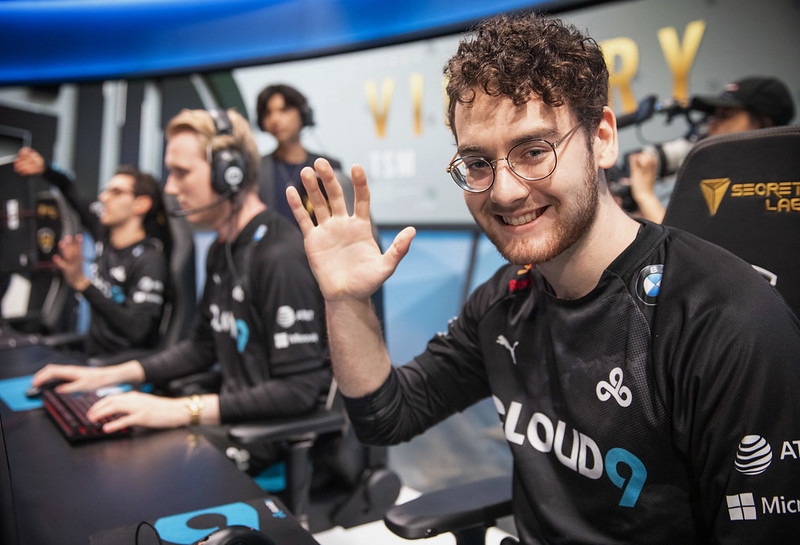 Vulcan and C9 are 8-0 after another pair of dominant victories. (Photo courtesy Colin Young-Wolff/Riot Games)

The fourth week of the League of Legends Championship (LCS) 2020 Spring Split has concluded. Cloud9 are off to a historic start as they move to 8-0, while Golden Guardians picked up two wins to put themselves in the middle of the playoff hunt. We take a look at where things stand in the LCS by looking at the top story lines so far in North America.

CLOUD9 OFF TO HISTORIC START

We have seen greatness, at least domestically, before in the LCS. 2013 Summer and 2014 Spring Cloud9, 2016 Spring Immortals, 2016 Summer TSM. But no team has ever dominated the league the way this current C9 roster is dominating the LCS.

The first victims this week were TSM. C9 conceded an early double kill to Søren “Bjergsen” Bjerg on a river skirmish gone awry, but it made no difference. A three kills to zero fight after TSM took Rift Herald swung the gold in C9’s favor and they never looked back. Eric “Licorice” Ritchie and Yasin “Nisqy” Dinçer played champions with much more impact in team fights than their counterparts and it showed. Nobody on TSM’s disjointed team managed to break double digits in damage dealt to C9 in the 27 minute loss.

Evil Geniuses and their three former C9 members had a chance at revenge on Monday Night League, but it wasn’t even competitive. An early three for one skirmish gave C9 a 1k gold lead at four minutes that they would never relinquish. EG never took a single objective the entire game. 2019 Summer MVP Dennis “Svenskeren” Johnsen was dominated by his protégé Robert “Blaber” Huang, going 1/8/3 on Jarvan IV for his worst performance of the year. Philippe “Vulcan” Laflamme, Tristan “Zeyzal” Stidam’s replacement, continued to show why he is the best support in the league by playing a perfect 0/0/13 Leona.

A collapse in the jungle leads to three early kills for @Cloud9! #LCS pic.twitter.com/TA831eCYK3

The pair of wins now moves Cloud9 to 8-0 on the season, one win away from completing a perfect first half of the season. But just citing their record does a disservice to how dominant they’ve been. It would be easier to list the categories they don’t lead the LCS in, but the gaps between them and the second-best team are absurd.

Their average game time of 30.1 minutes is three minutes better than Team Liquid. Their team K/D ratio of 4.09 dwarfs FlyQuest’s 1.20. They average a 2.5k gold lead at 15 minutes, 1.4k more than TSM. C9 pick up the first turret in 88% of their games and first dragon in 100% of their games. They have only given up ten turrets all season and they have yet to concede a Baron.

While it’s obvious that their numbers will look good when they win every game, the point is that these numbers are above-and-beyond the best numbers any team has ever put up in the LCS. Spring 2016 Immortals only had a 2.09 K/D. Summer 2016 TSM’s was 1.68.

Can they keep up this pace for the rest of the season? History tells us that it’s pretty much impossible. But C9 is rewriting what’s possible in the LCS, one win at a time.

A DAY OF REVENGE

The opening day of week four had a number of juicy matchups between spurned players and their former teams. Jake “Xmithie” Puchero got to face Team Liquid and his replacement Mads “Broxah” Brock-Pedersen, Jesper “Zven” Svenningsen got his first crack at TSM after they imported Kasper “Kobbe” Kobberup, and Zaqueri “aphromoo” Black rounded out the revenge tour with his first game against 100 Thieves. All three players played well and picked up their sweetest wins of the season.

Broxah, jetlagged and with little scrim time, arrived just in time for Xmithie to take advantage. A well-placed early ward by Immortals allowed Xmithie and Nickolas “Hakuho” Surgent to pick up First Blood on Broxah, tilting the early game in IMT’s favor. Considering the Sejuani into Lee Sin matchup, just farming it out while negating Broxah’s early pressure was a huge win for Xmithie. He finished 2/0/8 and up nearly 60 CS on Broxah in IMT’s 11 kills to 1 win.

Though he never had this kind of success in his stint with TSM, Zven showed them what they’re missing by adding to his MVP résumé. Zven and Vulcan bested Kobbe and Vincent “Biofrost” Wang in and out of lane, as Zven dealt a game-high 16.2k damage and finished 6/0/6 on Varus. Though it had nothing to do with his own play, Zven also had to delight in Kobbe and Joshua “Dardoch” Hartnett’s anti-synergy on multiple Miss Fortune Bullet Times and Gragas Explosive Casks.

Aphromoo left 100 Thieves as the team wanted to infuse more youth into the roster, but he showed that he still has some juice left in the tank. His Leona lockdown made for a nightmare for William “Stunt” Chen’s Nautlius, forcing his opponent into a 0/6/1 score line. Dignitas rode the strength of their bot lane to a 13 kills to 7 victory in under 30 minutes. Aphromoo’s ADC Johnson “Johnsun” Nguyen finished 6/1/6 on Miss Fortune with a game-high 18.9k damage dealt.

There weren’t a lot of expectations for Golden Guardians to open the season. Can “Closer” Çelik joined as a former MVP of the TCL, but players have been hit-or-miss jumping to bigger regions. Greyson “Goldenglue” Gilmer was picked up as the only native NA mid laner despite sticking on an LCS roster. Yuri “Keith” Jew was swapped from ADC to support late in the off-season, which was especially interesting because of his mediocre stints as an ADC.

GG seem to be coming together after a rough opening to the season. In week four, they picked up wins over Counter Logic Gaming and Team Dignitas to run their overall record to 4-4, good for fourth place in the LCS.

Goldenglue was great in the opener against CLG. He dominated Lee “Crown” Min-ho’s Neeko in lane and found the solo kill on Raymond “Wiggily” Griffin’s Trundle that led directly to the game-winning Baron. Though CLG have been a disaster all season, GG looked good in taking them down in under 27 minutes.

The win against Dignitas was even more impressive. Playing against his former mid laner Henrik “Froggen” Hansen, Kevin “Hauntzer” Yarnell popped off on Ornn to the tune of a 3/0/7 score. It was also Victor “FBI” Huang’s best game of the split, as he dealt a game-high 23.1k damage and finished 6/0/2 on Aphelios. He also made this little play at a dragon fight to seal the win.

Through four weeks, we can safely say that GG are better than expected. Closer has been instrumental in GG’s early games and is already looking like one of the best junglers in the LCS. Goldenglue is proving that he’s continued to develop during his time in academy and is more than holding his own against all the import mid laners.

And Keith, though he was a disaster in the opening two weeks, has really come on strong in his last few games. His K/D/A in his first four games? 1/22/12. But the last four games? 5/9/20. There is more work to be done, but he’s improving rapidly, much like the rest of the Golden Guardians.

In a twist few expected, the matchup between Golden Guardians and FlyQuest in week five of the LCS is between second and fourth place teams. Bot lane should be explosive as Jason “Wildturtle” Tran and Lee “IgNar” Dong-geun like to get as aggressive as FBI and Keith. Closer and Lucas “Santorin” Tao Kilmer Larsen are renowned for their jungle pathing, though Closer is much more aggressive in looking for ganks. Goldenglue and Tristan “PowerOfEvil” Schrage will fight to establish lane control to influence the jungle matchup.

Both teams are coming off a disappointing chunk of games and are looking to turn things around. Team Liquid will finally have a full week of practice with Broxah as he continued to adjust to his move to the LCS. Assuming he can get back in form, TL will have a big advantage in jungle. Heo “Huni” Seung-hoon has been playing well this split and may be able to capitalize on Jung “Impact” Eon-yeong’s lack of synergy with Broxah. The former Rush Hour bot lane duo Peter “Doublelift” Peng and aphromoo face off for the second time.