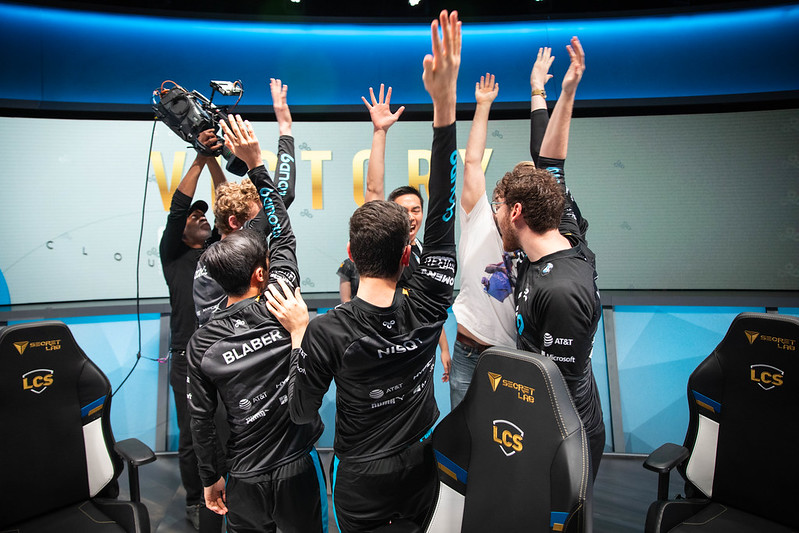 Cloud9 entered the 2020 League of Legends Champions Series (LCS) Spring Split finals as one of the biggest favorites in league history. After a 17-1 regular season, they advanced through the Winner’s bracket with ease. FlyQuest would be their last obstacle to completing one of the best seasons in LCS history.

Cloud9 continued their dominance over the LCS with a clean 3-0 sweep of FlyQuest to take him their first LCS championship since 2014. They will join G2 Esports — who also swept their championship earlier today — at the 2020 Mid-Season Invitational. Even though FlyQuest fell short, they will be proud of the quick turnaround from their 9th place finish from 2019 Summer.

Cloud9 opened the series with a blind pick Sett for Eric “Licorice” Ritchie. Colin “Earnest” Solo was fine going with the self counter pick in Ornn to set up a better late game for FlyQuest. With no mid laners picked in the first six, C9 banned out Leblanc and Kassadin to force FlyQuest into a decision. They could either pick Azir, allowing Yasin “Nisqy” Dinçer to counter him and Pantheon with Veigar, or they would allow Azir through with no champion that Tristan “PowerOfEvil” Schrage has shown left to counter him. FlyQuest opted to take Azir for themselves, leaving C9 with Veigar and Kindred in their final rotation.

A massive team fight breaks out in the river with @Cloud9 taking down four and breaking the game open! #LCS

Less than 3k gold separated the teams at 26 minutes. Both teams were fighting for top river control with Baron available. Lee “IgNar” Dong-geun’s Blitzcrank walked up to try to find a pick, but C9 were ready for the counter engage. Jesper “Zven” Svenningsen’s Bullet Time rained over FlyQuest. PowerOfEvil attempted to salvage the fight, but Robert “Blaber” Huang’s Kindred ult saved C9. C9 ended the fight up four kills for two and claimed Baron as their reward.

The sixth dragon spawn of the game at 34 minutes would be Ocean Soul for C9. FlyQuest started a fight and picked up the first couple of kills on Blaber and Philippe “Vulcan” Laflamme to delay the take. Unfortunately for FLY, Ornn and Blitzcrank could not kill dragon with Licorice’s Sett still alive. C9 respawned, regrouped, and rushed down the Ocean Soul with Ornn’s ult still on cooldown.

C9 picked up two kills in that Ocean Soul take, allowing them to grab Baron right afterwards. With those two major objectives, C9 were finally able to break down FLY’s base. They took game one 21 kills to 13 in 39 minutes. Zven finished 8/2/5 on Miss Fortune.

Cloud9 kept their Sett priority in game two, but changed up their bans by taking away Azir. That left up Syndra, but FlyQuest took both her and Aphelios in the same rotation, eliminating the threat of Syndra being a flex. That made it an easy Yasuo pick for C9 in their second rotation. Yasuo got even more value as Solo picked Ornn once again. With Rakan and Blitzcrank banned, IgNar went deep into his pool for his signature Alistar pick to round it out for FLY.

A skirmish in the top lane nets @FlyQuest first blood and a second kill, but a roam from @Nisqylol and @VulcanLoL gets the @Cloud9 mid laner a double kill in response! #LCS

FlyQuest picked up their second consecutive First Blood in game two. Licorice’s Sett engaged early on Ornn to set up for the incoming Gragas gank, but Lucas “Santorin” Tao Kilmer Larsen’s Rek’Sai was also around. Licorice got turned on and died, allowing Blaber to be collapsed on by PowerOfEvil’s Syndra. Fortunately for C9, Vulcan roamed all the way up from bot, allowing Nisqy to clean up two kills for himself to even the exchange for C9.

C9 catapulted ahead with a pair of plays at 10 minutes. Vulcan and Zven picked up a solo kill on Jason “WildTurtle” Tran’s Kalista bot, followed by Nisqy joining for a kill on IgNar. FlyQuest then saw three C9 members bot and attempted a dive on Sett top. Not only is it risky to dive Sett when his Haymaker is up, Blaber was hovering behind for a counter gank. C9’s duo picked up kills on both Solo and Santorin to extend their kill lead to four and gold lead to 2k+.

In the driver’s seat, C9 stacked dragons and took Ocean Soul uncontested at 24 minutes. A Baron at 28 minutes was enough for them to crack FLY’s base and end a dominant game two. C9 took it 24 kills to 6 in 31 minutes to put FLY on match point. Zven finished 9/0/9 on Kalista.

FlyQuest took blue side for the first time in the series in game three. They opted for Ornn first pick, even though C9 passed on the opportunity to take him with their first pick in games one and two. That priority probably changed because C9 banned out Sett on red side. C9 picked a very similar composition to the one that got TSM in trouble against FlyQuest. Their early Aatrox and Aphelios made them very susceptible to long range mages, making it a good Syndra game for PowerOfEvil. With good lane matchups and a clear scaling advantage, this was FlyQuest’s best draft of the match.

It clearly didn’t end up mattering. The two teams grouped at nine minutes to battle for the Rift Herald at even gold. Nisqy’s Rumble died first, but PowerOfEvil fell for FlyQuest. Though just a kill apiece was exchanged, C9 got the Rift Herald without sacrificing any CS or turret plates to FlyQuest.

C9 used that buff to secure the first turret bot, allowing them to stack up the early dragons once again. FlyQuest fought for the Mountain drake at 18 minutes in an attempt to delay C9’s Soul Point. It looked good at the beginning as they picked off Blaber’s Jarvan IV, but Nisqy’s Equalizer re-engage burned them down. Licorice’s Aatrox then flashed in for a double kill, giving C9 a three kills to one team fight win and their third dragon of the game.

A Baron sneak at 20 minutes solidified C9’s hold on the game. With it, they took down FLY’s bot inhibitor and one of their Nexus turrets. That led into an uncontested Mountain Soul capture, making it near impossible for FLY to come back.

A celebration six years in the making #C9WIN #LCS pic.twitter.com/vrKgQ7ASwk

Cloud9 came barreling down mid lane at 27 minutes. Vulcan found a pick onto Santorin’s Pantheon, forcing FlyQuest into a fight outside their base. FLY quickly dropped Zven, but the rest of C9 cleaned up FLY. Licorice picked up a triple kill, C9 won the fight four kills to one, and C9 moved onto the Nexus. Three of the four remaining C9 players were killed as FLY respawned, but Licorice finished off the Nexus to give C9 their championship win. They took it 16 kills to 10 in 28 minutes.

Vulcan was named player of the series for his exceptional hook play on Nautilus and Thresh. He combined for a 2/5/42 score across the series.

The first player to win a title in NA & EU

With the win, Zven became the first player to ever win a domestic championship in both Europe and North America.

The LCS Summer Split is scheduled to begin on Saturday, May 16th.