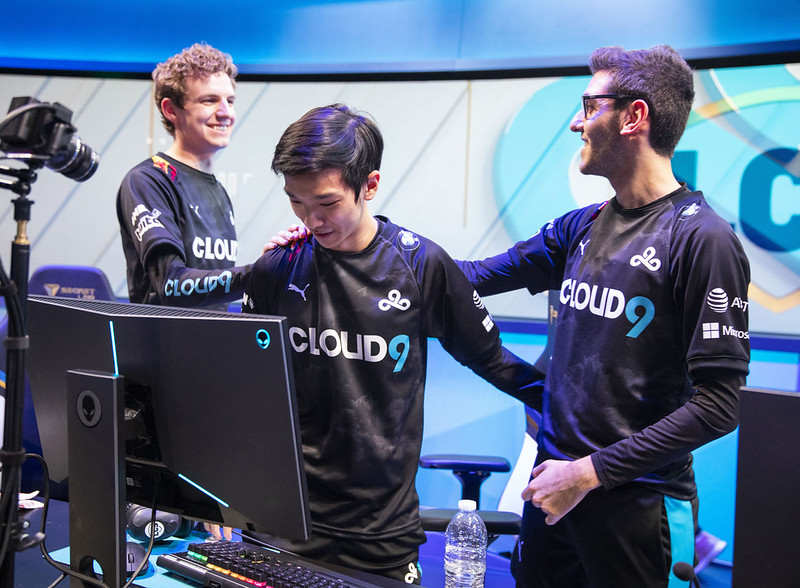 Semifinals MVP Blaber and Cloud9 are heading to the finals after a 3-1 win over Evil Geniuses. (Photo courtesy Colin Young-Wolff - Riot Games)

The two best teams in the 2020 League of Legends Championship Series (LCS) Spring Split regular season faced off with a spot in the finals on the line. Cloud9 advanced to the semifinals after a 3-0 route of 100 Thieves, while Evil Geniuses held off FlyQuest 3-1 in Round 1.

Cloud9 started a theme of placing high priority on Varus by first picking him to open game one. Evil Geniuses countered by picking heavy engage in the form of Gragas, Ornn, and Nautilus. Eric “Licorice” Ritchie picked Aatrox into Ornn, while Daniele “Jiizuke” di Mauro opted for Yasuo into Syndra. Robert “Blaber” Huang continued his use of Nocturne, an especially interesting pick online. When enemy teammates played next to each other on LAN, they could just look at each other’s screens to figure out what was happening during Paranoia. Now playing from home, they have to resort back to pings and verbal communication.

Cloud9 won the first early skirmishes in the game. Blaber’s Nocturne picked up First Blood on Jiizuke to get ahead, then snowballed his lead by ganking bot and starting Rift Herald at 10 minutes. Evil Geniuses contested, but Licorice walked down to pick up a triple kill on Aatrox. C9 had already built a 3k gold lead by 12 minutes.

.@blaber gets a 1v2 kill and ALMOST gets away with his life before being taken down by @Svenskeren1! #LCS

Both teams postured on the top half of the map with Baron up at 24 minutes. Tristan “Zeyzal” Stidam’s Nautilus hook on Philippe “Vulcan” Laflamme started the fight, but it wasn’t one that EG wanted to take. Colin “Kumo” Zhao couldn’t hit his Ornn ultimate in the chaos of Blaber’s Paranoia and Bae “Bang” Jun-sik’s Miss Fortune got popped instantly by C9’s dive. C9 picked up four kills for zero, Baron, and grew their gold lead to 10k at 25 minutes.

Cloud9 played it slow, securing Cloud Soul to make sure their lead was insurmountable. Their final push came after another Baron take at 34 minutes. With the threat of Elder Drake looming, EG pulled the trigger on a fight. Even with the help of their fountain and turrets, EG couldn’t kill a single member of C9. C9 finished the Nexus up 24 kills to 10 in 25 minutes. Yasin “Nisqy” Dinçer finished 3/1/17 on Syndra for an impressive 83% kill participation as a mid laner.

Cloud9 banned Aphelios and Senna in game two to leave up Kalista for Evil Geniuses’ red side first pick. With Varus banned out, C9 responded with Ornn and Ezreal in their first rotation. Former C9 MVP Dennis “Svenskeren” Johnsen opted for even more early game power on Pantheon, while Blaber went right back to Nocturne. Nisqy got to counter pick mid this time and got his hands on Zoe into Jiizuke’s Ryze.

Even with a weaker jungler in the early game, Blaber made a stronger impact on the map. He and Nisqy combined to pick off a flashless Svenskeren overextended in C9’s jungle for First Blood. Svenskeren then tried to help Kumo get ahead top, but Licorice solo killed him in a 1v2 situation and got away without issue. A three-man dive on Kumo at six minutes sent him to his second death and gave C9 a big 1.3k lead.

C9 extended that lead by getting the better of the skirmishes throughout the early to mid game. If playing around Nocturne’s Paranoia was tough for EG with Ornn, it was only tougher for them to play against Ornn and Nocturne on the same team. Blaber’s Paranoia masked Licorice’s Call of the Forge God to disguise where the engage was heading, leaving EG sitting ducks. C9 extended their gold lead to 8k by 20 minutes.

An uncontested Baron at 24 minutes gave C9 the closing power they needed to finish game two. Jesper “Zven” Svenningsen picked up a triple kill in the final team fight of the game for a C9 ace. They took game two 23 kills to 6 in 25 minutes to move to match point. Nisqy finished a perfect 11/0/7 on Zoe, again leading his team in kill participation.

Evil Geniuses fought back in game three. Instead of trying to match Cloud9 in the early game, EG picked for scaling. They took Aphelios with their first pick on blue side and gave him a beefy front line in Braum and Poppy. C9 continued to play the global game, picking Pantheon and Taliyah after EG banned out Nocturne. If Evil Geniuses could withstand C9’s early game, they definitely had the better scaling composition.

It looked like EG would never make it there. Nisqy’s Taliyah picked up First Blood on Jiizuke’s Zoe, C9 picked up Rift Herald and first turret top, and C9 were up five kills to two and 5k gold at 15 minutes.

However, C9 were not the better side in team fights. Kumo’s Steadfast Presence prevented Licorice’s Aatrox and Blaber’s Pantheon from being effective divers, and Zven’s Varus didn’t have the luxury of a tank line like Bang’s Aphelios. C9 won consecutive team fights around Ocean drake to stabilize their early gold deficit and turn the game around.

We're bringing Evil back! Send us all your energy as we head into Game 4 vs. @Cloud9 in @LCSOfficial 😈 pic.twitter.com/K9uo2lYBn6

EG picked up Baron at 26 minutes after another fight win around the second Ocean drake. They used the buff to push all the way from top outer turret through to C9’s inhibitor turret. C9 tried to coordinate a flank to start the fight, but EG picked them off one at a time. First Nisqy got caught, then Blaber ulted into his death, and finally Licorice arrived with no support. EG used those three kills to push all the way through the Nexus, pulling off the comeback win. They led 12 kills to 6 in 28 minutes. Bang was a perfect 6/0/4 on Aphelios.

Evil Geniuses clearly liked their results from game three and went for a similar composition in game four. Gragas and Poppy were their top side once again, while Ashe provided the engage to start fights. C9 stuck to an early spiking composition, but did not go for any globals this time around. With EG taking away Tahm Kench in their first rotation, Vulcan picked up Blitzcrank. EG would again out scale C9 if they were allowed to get through the mid game within striking distance.

There were a number of sloppy plays in game four. Jiizuke’s Ekko solo killed Nisqy’s Rumble after both players misused their flash, Jiizuke then stayed and died to Licorice’s in vision roam, and Licorice then overextended top lane without buying to give away a kill.

It looked like game four was going just like game three. Cloud9 got off to an early lead, but EG were clearly mounting a comeback. They cut their kill deficit from four to two with consecutive fight wins and won the initial fight around the fourth drake spawn. C9 started what would be their Mountain Soul despite being down 4v5, hoping to burst it down before Kumo could return from base. Svenskeren’s Gragas got just a little too close and was pulled by Vulcan’s Blitzcrank. C9 instantly bursted him down to remove EG’s smite. C9 then finished the drake for Mountain Soul and swung the game back in their favor.

ONTO THE GRAND FINALS#C9LoL defeat @EvilGeniuses 3-1 to secure their spot in the 2020 #LCS Spring Grand Finals! #C9WIN pic.twitter.com/9NB7VOPckt

Even though they aren’t a team that would build too many resistances, the tankiness from the Mountain Soul was a killer against EG’s composition. EG don’t naturally build penetration items on their champions and don’t have an abundance of raw damage. The extra stats allowed C9 to win extended fights, even if their composition would otherwise lose.

That was on display at the Elder Drake fight to close the series. EG couldn’t get through C9’s shields, allowing C9 to pick up the buff and three kills. With that in hand, C9 stormed the EG base and ended the series with a 22 kill to 10 win in 31 minutes. Zven’s Varus finished game four a perfect 7/0/10.

Round 2 of the LCS playoffs continues with an elimination match between TSM and FlyQuest. Their series will begin on Sunday, April 12th at 1 p.m. PST.