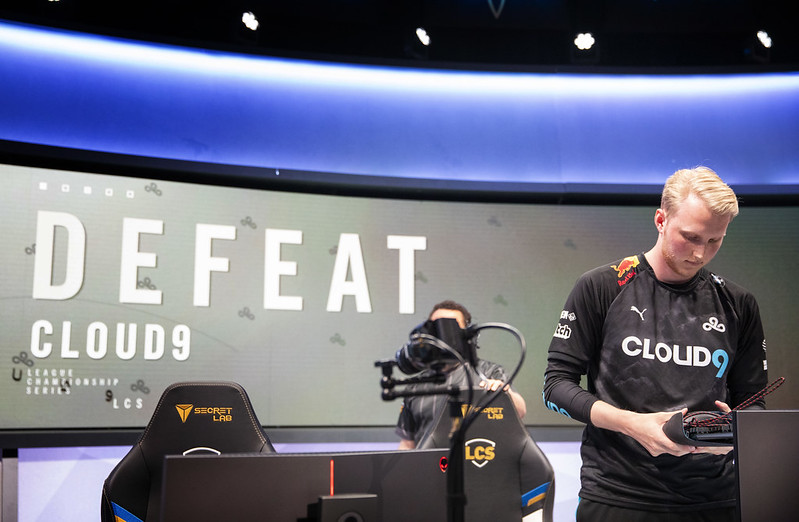 The eighth week of the League of Legends Championship (LCS) 2020 Summer Split has concluded. Two more Cloud9 losses have knocked them out of first place, while Evil Geniuses may have to consider another roster swap as the regular season comes to a close. We take a look at where things stand in the LCS by looking at the top storylines so far in North America.

TIME FOR CLOUD9 TO PANIC?

Cloud9 was historically great in the Spring Split. Not only did they have a 17-1 regular season record, but they blew teams out in every game. They averaged a gold lead of 2.7k at 15 minutes and their 31 minute average game time was far and away fastest in the league. Cloud9 then dropped only one more game in the playoffs, eventually sweeping FlyQuest in the Finals to win the LCS title. If that wasn’t enough to show their dominance, all five of their starters were named to the LCS All-Pro first team.

Cloud9 earned every bit of their praise, but we also have to put it in context. The LCS had no team push C9 in the Spring, as the next best record after C9 was a three-way tie at 10-8. The rest of the LCS was mediocre at best, elevating C9 to an almost mythical status. So not only was it unlikely that C9 could sustain that level of performance for an entire year, it was also unlikely that no challengers would ever emerge to give them competitive games.

That looked to be the case this Summer Split. After a dominant 9-0 start to the season, Cloud9 suffered defeats in three consecutive weeks. They first slipped up against a revamped 100 Thieves, but losses to Evil Geniuses and Team Liquid were not a one-time slip. Cloud9 were no longer ahead of the pack, but they entered week eight still tied for first and in full control of receiving one of the top two seeds in the playoffs.

How the turntables #LCS pic.twitter.com/phuXhwOmzs

That’s no longer the case after Cloud9 dropped games to both Golden Guardians and TSM in week eight. Tanner “Damonte” Damonte’s Syndra gave C9 fits in their opening game. The GGS mid laner went 7/1/5 while dealing a game-high 28.5k damage. C9 then completed their first 0-2 week of 2020 with a loss to TSM. Yiliang “Doublelift” Peng’s Caitlyn tore through C9’s lineup, going 6/1/5. Mingyi “Spica” Lu’s Sett got the better end of the jungle matchup against Robert “Blaber” Huang’s Volibear, landing critical CC on C9 in team fights to buy time for Doublelift and Sergen “Broken Blade” Çelik’s Irelia. TSM were in total control in their 17 kill to 7 win in 32 minutes.

Cloud9 have chalked their struggles up to a bad read on the meta, but there are more factors at play. First and foremost, teams like Golden Guardians and TSM are just much better than they were in Spring. Both Damonte and Doublelift weren’t even on their teams in Spring and have helped their new teams improve in the Summer.

Cloud9 has also struggled when mid laner Yasin “Nisqy” Dinçer has had to play more laning focused champions. Nisqy is a great roaming player who enables Blaber and Eric “Licorice” Ritchie to play more aggressively top side, but C9 has shifted away from picks like Galio, Twisted Fate, and Rumble that enabled Nisqy to get out of lane. In recent losses, Nisqy has played Cassiopeia, Syndra, Sett, and Azir.

Cloud9 are obviously still locked into the playoffs, but they are now tied with TSM for second place. C9 have a schedule advantage in playing Dignitas and Counter Logic Gaming to close out the regular season, but they’ll need to make sure they take care of those games to secure a top two seed. FlyQuest is also lingering a game behind, and their soft schedule includes CLG and Immortals.

WILL EVIL GENIUSES SWAP BACK?

After a pair of defeats to Counter Logic Gaming and Golden Guardians in week five, Evil Geniuses made the bold call to bench both of their solo laners. Colin “Kumo” Zhao and Daniele “Jiizuke” di Mauro were lifted in favor of Heo “Huni” Seung-hoon and Greyson “Goldenglue” Glimer. After a loss to Team Liquid, the new lineup handed Cloud9 their second loss of the season, earning them a long leash to start the next two weeks.

After dispatching Immortals to open week seven, the new EG lineup dropped a game to Dignitas, one of few teams that may possibly miss the playoffs. EG stuck with their new solo laners with a tough week eight schedule against TSM and FlyQuest, but two more losses now have Evil Geniuses sitting at 7-9 on the season. EG have already clinched a playoff berth, but they are already guaranteed to have a worse regular season record than Spring and look to be trending in the wrong direction.

We’ll get our revenge in playoffs. GGWP

Huni’s Kennen was victimized by TSM in their opener. The Korean import went 1/6/3, constantly picked off by Broken Blade’s Malphite ult without ever punishing him in lane. Broken Blade matched Huni in farm, and EG’s three marksman composition forced Huni into early magic damage. TSM eventually won the game 14 kills to 6, though it took them 39 minutes. Goldenglue had a solid 3/1/3 game on Zoe.

Huni had a better game against FlyQuest. His flash over the blue buff wall on Rumble helped EG secure the first two kills of the game, and he matched farm against Colin “Solo” Earnest’s Sett throughout. Dennis “Svenskeren” Johnsen (1/5/3) and Tristan “Zeyzal” Stidam (0/5/4) had rough outings, allowing Tristan “PowerOfEvil” Schrage’s Corki to take over with a 7/2/3 score. FlyQuest won 14 kills to 7 in 36 minutes.

Though EG faced tough opponents in week eight, it’s still hard to make the case that they should continue playing with their new solo laners. The new roster is now 2-4 in three weeks, and while they’ve lost to three of the top teams in the league, they also dropped a critical game in the playoff race to Dignitas. Their “big” win over Cloud9 is their only selling point, but that victory is looking less and less impressive as C9 has gone only 2-3 since that loss.

Huni and Goldenglue haven’t played poorly, but EG looked like a more dangerous team with Jiizuke in the starting lineup. Goldenglue generally plays control mages better, but EG haven’t shown an ability to beat teams when matched up in 5v5 team fighting compositions. That makes Jiizuke’s ability to steal games on assassin carries more valuable, as it at least gives EG a fighting chance. While inserting Jiizuke would mean that Huni has to sit, Jiizuke’s play making ability in the mid lane is more important than Huni’s in the top lane.

Evil Geniuses’ final two games are against teams they are fighting with for playoff positioning. They open against the 9-7 Golden Guardians before ending their regular season against the 6-10 100 Thieves.

With the change to an eight team playoff field in Summer, there are four teams fighting for the final two playoff spots in the LCS: 100 Thieves, Counter Logic Gaming, Dignitas, and Immortals. With the playoff field so large, no team has been eliminated from the playoffs heading into the final week of the regular season.

.@100Thieves increase their chances of making the 2020 #LCS Summer Playoffs after taking down @Immortals! #100WIN

100 Thieves are all but guaranteed to make the playoffs. They need only one win to guarantee their spot, but they will also make it in most cases even if they drop both games. Their 2-0 head-to-head over Immortals gives them a big advantage even if IMT wins out, as does their 1-0 record over Dignitas. 100T get games against Dignitas and Evil Geniuses to close the season.

After their 4-2 start to the season, CLG have gone just 1-9 in their past 10 games. Fortunately, that’s still enough to put you in playoff position in the LCS. Unfortunately, CLG have a brutal week nine schedule. They play Cloud9 and FlyQuest.

Dignitas probably have the best chance of stealing one of the final two playoff spots from 100T or CLG. Their draw of Cloud9 and 100 Thieves is definitely more favorable than Immortals’ Team Liquid and FlyQuest schedule. Dignitas also has the chance to tie 100T on head-to-head, while IMT have already lost that tiebreaker. Still, both teams have a chance to make it despite their 25% winning percentage through eight weeks.

Team Liquid now look like a lock to lock up the number one seed after Cloud9 dropped two more games in week eight. TSM’s win over C9 has them in position to steal the number two seed from C9, who have now guaranteed themselves a losing record in the second half of the split. FlyQuest also have a shot at a top two seed after picking up two more wins.

No team is eliminated from the playoffs heading into the final weeks, but Counter Logic Gaming and 100 Thieves have the advantage over Dignitas and Immortals. Evil Geniuses will aim to lock up a Winner’s bracket spot, while Golden Guardians have an outside shot at forcing a tiebreaker for the number two seed.

Though both teams have a losing record, this is one of the more important matchups on the weekend. 100 Thieves can clinch a playoff spot with a win, while Dignitas probably have to win this one to keep their playoff hopes alive. With a 5-5 record since the swap, 100T like the direction they’re heading with their new lineup. Dignitas continue to start Omran “V1per” Shoura over Samson “Lourlo” Jackson for reasons that could only be explained by scrim results. It also might make sense to bring back Henrik “Froggen” Hansen if they are going to continue playing so passively as a team.

Team Liquid may already have the top seed locked up by the time these two teams play, but TSM will be playing for at least the second seed regardless. Both have looked markedly improved since Doublelift left TL for TSM, the rare time a star player transfer has worked out for both teams. Jo “CoreJJ” Jong-in is the MVP front runner playing with Edward “Tactical” Ra, while TSM looks improved after putting in Erik “Treatz” Wessén for Vincent “Biofrost” Wang. Bot lane revenge narrative aside, the matchup between Nicolaj “Jensen” Jensen and Søren “Bjergsen” Bjerg is always must-watch.