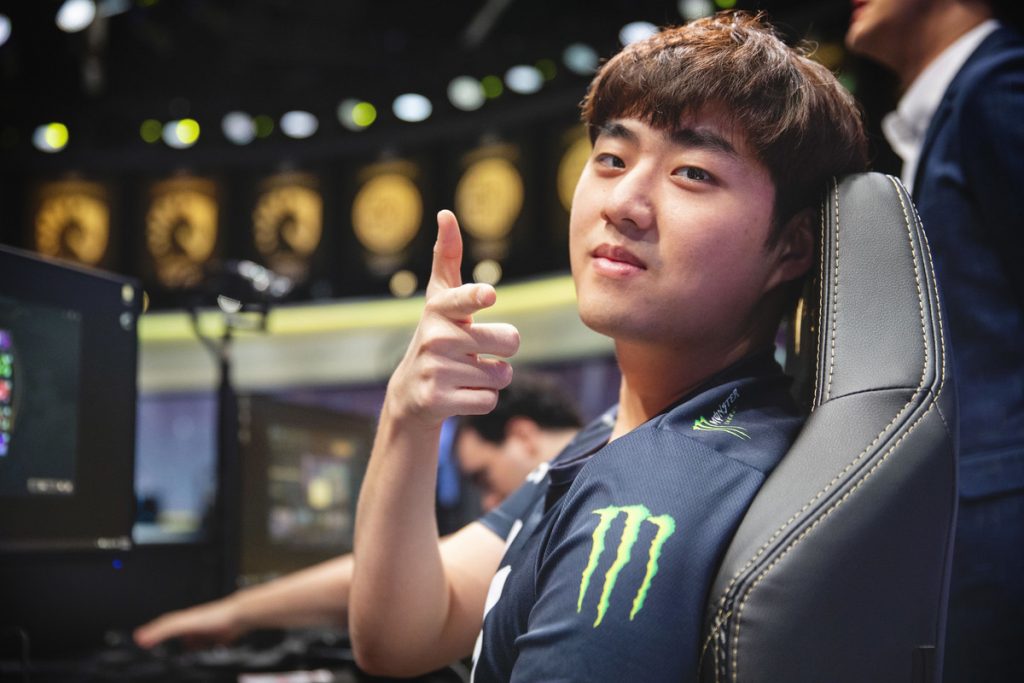 The sixth week of the League of Legends Championship (LCS) 2020 Summer Split has concluded. It was a week of roster changes, as Evil Geniuses introduced two new solo laners in an upset of Cloud9. TSM and FlyQuest also made changes to their starting lineups to go 1-1 on the week. We take a look at where things stand in the LCS by looking at the top storylines so far in North America.

Evil Geniuses ended the 2020 Spring Split looking like one of the best teams in North America. They finished the regular season in second place after going 7-2 to close the split, and though they missed out on the Spring Finals, they were the only team in the postseason to take a game off Cloud9.

EG started the 2020 Summer Split 2-0 before losing to Cloud9 to open week two. A dominant, crushing win over Team Liquid to end week two looked to have cemented them as the second best team in the league. However, the following weeks weren’t as promising. EG went only 2-4 from weeks three to five, dropping them down to 5-5 halfway through the season. With a team that surely paid a hefty fee to import three Cloud9 players and signed imports like Daniele “Jiizuke” di Mauro and Bae “Bang” Jun-sik, more was expected.

.@Goldenglue and @Huni will be taking to the Rift this weekend in our matches against @TeamLiquidLoL and @Cloud9. @KumoLoL will be playing in Academy for this week while @JiizukeLoL takes an active sideline role.

Evil Geniuses thus made the decision to bench both solo laners Colin “Kumo” Zhao and Jiizuke for Heo “Huni” Seung-hoon and new pickup Greyson “Goldenglue” Gilmer. Considering Jiizuke was one of EG’s best performers, the move looked aimed at upgrading top lane. Huni still counts as an import until 2021, so one of Jiizuke or Bang needed to be benched for Huni to play. EG’s solution was to pick up Goldenglue, who was released from his contract with Golden Guardians after a decent 2020 Spring Split.

The early results in week six were not promising after Evil Geniuses opened with a questionable draft against Team Liquid. EG held their last pick for Huni, and seeing Jung “Impact” Eon-yeong picked Mordekaiser, Huni opted to pick Karma as a lane bully. That would be fine, except that EG lacked a carry for Huni to buff in the late game. Bang played Senna, Tristan “Zeyzal” Stidam played a traditional Braum support, and Goldenglue played a control mage in Orianna. Huni got ahead early with help from Dennis “Svenskeren” Johnsen’s Sett, but it didn’t move the needle. Nicolaj “Jensen” Jensen’s Azir also crushed Goldenglue in lane, giving TL priority in the middle of the map. TL would go on to win 17 kills to 8 in 32 minutes.

That's a big W. So glad we could show how strong we can be as a team with ONLY THREE DAYS OF PRACTICE!! So excited to play with this team/roster

Even with the loss, Evil Geniuses did not pull the plug on the new solo laners in their following game against Cloud9. That move paid off as EG became the second team in two games to upset the LCS leaders. Playing against a less lane dominant player in Yasin “Nisqy” Dinçer, Goldenglue was much more comfortable on Zoe, landing Sleepy Trouble Bubbles and Paddle Stars to poke down Cloud9. Huni was also put on a carry in Gangplank. Though he fell behind after an early C9 dive, he regained his footing with a well-timed teleport bot to pick up a kill.

EG then controlled the dragon area, taking four uncontested to pick up Mountain Soul. With it, C9 could no longer team fight EG. EG pulled off the upset up 17 kills to 11 when they finished the Nexus at 37 minutes. Huni’s Gangplank finished 4/1/8, while Goldenglue’s Zoe finished 6/2/7. Huni’s 26.3k damage and Goldenglue’s 21.3k were the highest in the game.

It’s hard to believe that EG would swap out their solo laners after such big performances in an upset over C9, so expect to see them again in week seven. Evil Geniuses will take on Immortals to open their week, followed by Dignitas.

TSM SUBS IN TREATZ FOR BIOFROST

Coming off a 0-2 week five, TSM made a roster change of their own. Out went Vincent “Biofrost” Wang, in came Erik “Treatz” Wessén. While the move makes sense on a merit-based level — Treatz has been crushing the academy scene for a while and has turned down LCS offers to remain with TSM — it was still somewhat surprising to see TSM break up the Biofrost and Yiliang “Doublelift” Peng pairing so quickly. Biofrost being with TSM was a big part of why Doublelift wanted to join for the Summer.

Individual performance aside, TSM may have also wanted a new shot calling voice on their main roster. Though Biofrost took on a bigger voice when he joined Counter Logic Gaming, we know that he is not a naturally loud voice in communications. On the other hand, Treatz was the lead shot caller for TSM’s academy squad, as you can see in this team fight he shared:

TSM opened against 100 Thieves, the team who just upset Cloud9. Though they won, it was hardly a clean game. TSM had a gold lead throughout, but 100 Thieves started to take control of the fights late. Doublelift got caught out of position late, leading to 100 Thieves picking up Mountain Soul. It didn’t end up mattering, as Søren “Bjergsen” Bjerg’s Leblanc back doored 100 Thieves again, but there were definitely sloppy moments with the new lineup.

A failed early invade doomed TSM against FlyQuest. Mingyi “Spica” Lu’s Olaf barreled ahead of Treatz’ Braum on the invade attempt, making it look like that was a massive miscommunication between the new teammates. Given his innate tankiness and the potential marking with his passive, Braum should always be in the lead.

Spica then walked to his blue buff at 3 minutes and died to an invade from FlyQuest’s bot lane and jungler. Olaf does not do well when behind, leading TSM to crumble on the map. FlyQuest took a largely unexciting eight kills to four win in 32 minutes. Doublelift (0/0/4) and Treatz (0/1/4) played fine, but they could not do much with their top side so far behind.

Treatz definitely did not step in and magically solve any of TSM’s problems, but he didn’t look out of place either. Spica had his worst weekend as a pro, going 0/5/3 on Graves in the win against 100T and getting taken out of the game within three minutes by FlyQuest. That could be his lack of synergy with TSM’s new support. They’ll need to get on the same page next week, as TSM faces Dignitas and long-time rival Counter Logic Gaming.

After playing well in 2020 Spring and a 1-1 week one that included a loss to Cloud9, FlyQuest announced they would sub in Brandon “MasH” Phan for Jason “WildTurtle” Tran in week two. They argued that MasH has been playing well in academy and in scrims and deserved to have stage time. That made sense, though WildTurtle had started every game for FlyQuest since he joined the team in 2017 Spring.

MasH then started for the next four weeks, playing well at the start. Unfortunately, some late game slip-ups from MasH hurt FlyQuest, notably in a loss to 100 Thieves in week five. That opened the door for WildTurtle to return to the starting lineup in week six.

WildTurtle and FlyQuest opened with the aforementioned win over TSM and their new bot lane. WildTurtle played Ashe with Lee “IgNar” Dong-geun’s Pantheon into Senna and Braum. Though they never had 2v2 kill threat, WildTurtle was involved in skirmishes around the map to help FlyQuest to their early lead. He finished 3/1/3 and his 16.7k damage dealt was second highest in the game.

Congratulations to @WildTurtle on becoming the second player to ever hit 1500 Regular Season Kills in the #LCS! #FLYWIN

FlyQuest then had the unfortunate task of facing a Cloud9 team coming off their first two losses of the season. C9 won it in a landslide, needing only 27 minutes to take a 13 kills to 3 win. However, WildTurtle’s kill on Robert “Blaber” Huang’s Sett at 12 minutes will always be a special one to him. WildTurtle picked up his 1,500th career kill in the LCS regular season. WildTurtle is only the second player to ever hit that mark, following Doublelift.

Nostalgia aside, WildTurtle seems like the best option for FlyQuest going forward. Though he’s an aggressive player, WildTurtle has not made the same late game team fighting mistakes that MasH has in limited play time. FlyQuest will take on Team Liquid and Golden Guardians in week seven. 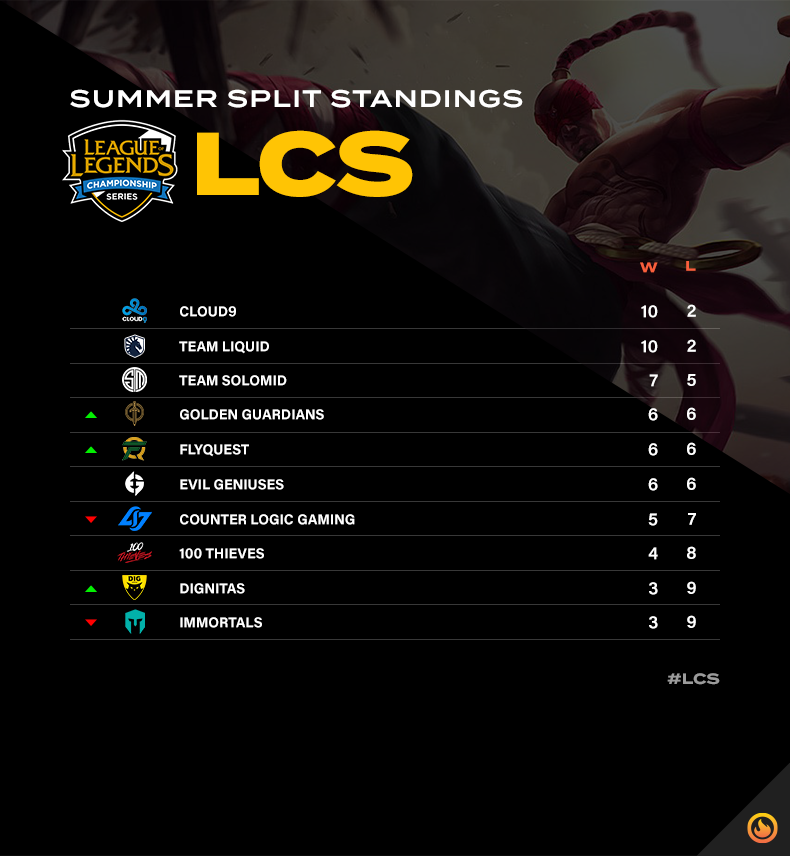 Team Liquid has caught up with Cloud9 at the top of the standings after another 2-0 week. Both teams have already clinched their playoff spots with three weeks to play. TSM are in sole possession of third place at 7-5, while three teams are tied for fourth at 6-6.

Both Dignitas and Immortals remain in last place after adding a win. 100 Thieves looked poised to make a second half run after their upset win over Cloud9, but disappointing losses to TSM and Team Liquid leave them at 4-8.

This matchup between two 6-6 teams could be crucial in the push to the playoffs. Golden Guardians are coming off a pair of wins over the bottom two teams in the LCS, while FlyQuest split against TSM and Cloud9. FlyQuest should have the advantage in the middle of the map with Tristan “PowerOfEvil” Schrage and Lucas “Santorin” Tao Kilmer Larsen, but Victor “FBI” Huang has quietly been one of the better ADCs in the LCS this season.

The 2019 Summer champions against the 2020 Spring champions. Both teams are 10-2 and tied for first place, even though Cloud9 have looked much more dominant for most of the season. Team Liquid could be catching C9 at the right time, as C9 have looked unsure of themselves for the first time in 2020. There are explosive matchups everywhere, but it’ll be imperative for TL that Impact can hold up in lane against Eric “Licorice” Ritchie. If one lane collapses, it’ll give too much room for Blaber and Nisqy to roam around and take over the whole map.