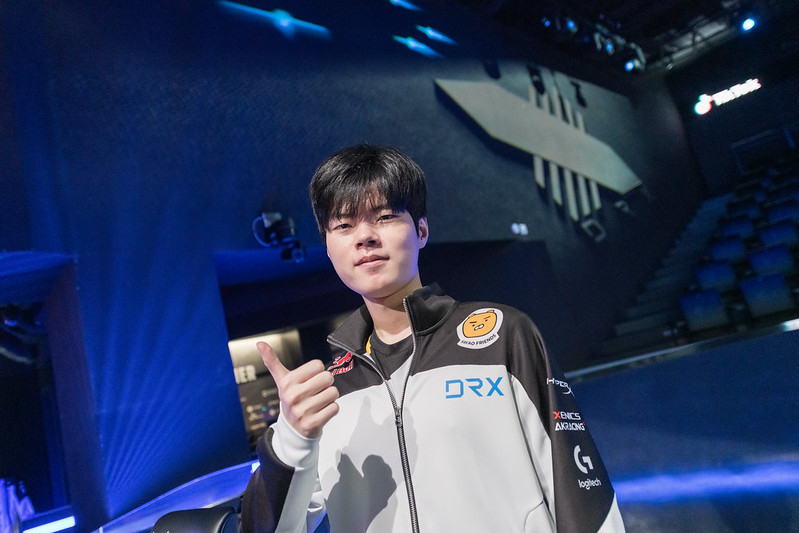 Another win over another top team has DRX sitting pretty at the top of the LCK. (Photo courtesy Riot Games - LCK)

The League of Legends Champions Korea (LCK) completed their sixth week of the 2020 Summer Split. DRX held off Gen.G in a close 2-1 series to hold on to the top spot in the LCK. Meanwhile, Afreeca Freecs’ win over SeolHaeOne Prince has them currently holding onto the fifth and final playoff spot. We take a look at where things stand in the LCK by looking at the top story lines so far in Korea.

The LCK has been a top heavy league the past couple of years. Though the top few teams have remained competitive internationally, albeit less so than their previous dominance, the depth of title challengers has suffered. That has continued in the Summer Split, as the LCK has a huge gap between the top four of DRX, DAMWON Gaming, Gen.G, T1, and the rest of the league.

While it might create some boring matchups later in the season, especially with only five playoff spots available, there is no shortage of great matchups between top teams fighting for playoff position. That was the case again in week six as Gen.G took on DRX.

Gen.G entered the match in their best form of the season. After falling to T1 in week three, Gen.G had ripped off five consecutive wins, including an important rematch over T1. At 9-2, Gen.G had a chance to tie DRX in the loss column and make a bid at winning the regular season title for a second consecutive split. Meanwhile, DRX is coming off a softer recent schedule. After losing to KT Rolster in week four, DRX’s only quality win was over DAMWON Gaming. Wins over Hanwha Life Esports, Team Dynamics, and a rematch win over KT Rolster were expected.

Gen.G bounced back in game two. Kim “Clid” Tae-min’s Sejuani set them up for success, providing the main engage for the team while participating in 12 of their 13 kills. Kim “Rascal” Kwang-hee’s Camille almost Flame Horizoned Choi “Doran” Hyeon-joon’s Karma, leading by 90 CS when Gen.G ended the game at 33 minutes. Chovy’s Sett went 4/1/3 in a losing effort.

The much-maligned Doran made sure DRX would go home winners in game three. His AP Kennen held Rascal’s Camille down in lane, picking up First Blood and extending his early lead. Doran went 5/2/4, dealt a game-high 17.3k damage, and pushed DRX to an 11 kill to 5 win in a slow-paced 39 minute win. Hong “Pyosik” Chang-hyeon had his best game of the series, going 1/0/8 on Lee sin.

The DRX win not only keeps them two games ahead of Gen.G in the standings, but it also earns them the head-to-head tiebreaker if the teams end the season tied. It was a crucial victory, as it can’t be understated how important seeding is to the LCK playoff format. Remember, each spot you move up from three to one is like another bye in the playoffs. So, the first overall seed automatically qualifies to the finals. Gen.G couldn’t take advantage of that in Spring, but DRX would certainly like to try their luck in a single best-of-five for the title.

DRX’s next match will be their most important of the season. They open week seven against DAMWON Gaming. If DRX can win, they will take a two match lead and tiebreaker over DWG as well, giving them a clear path to the first overall seed. Gen.G will get the opportunity to rebound from their loss against the 1-11 SeolHaeOne Prince.

Afreeca Freecs looked like a dark horse title contender to open the 2020 Spring Split. They dramatically upgraded their ADC spot in the off-season by bringing in former Team WE ADC Jin “Mystic” Seong-jun, giving AF a second threat next to star top laner Kim “Kiin” Gi-in. Afreeca Freecs then dominated the KeSPA Cup, and while not every team was playing their main roster, AF stood out for their dominance.

But after a 3-0 start to the Spring Split, the wheels fell off for Afreeca Freecs. AF would go only 4-11 the rest of the way, unable to figure out their best starting lineup. Lee “Spirit” Da-yoon and Lee “Dread” Jin-hyeok split time at jungle, Song “Fly” Yong-jun and Kim “ALL IN” Tae-yang at mid, Seo “SS” Jin-sol got some time over Mystic at ADC, and Nam “Ben” Dong-hyun subbed in at times for Son “Jelly” Ho-gyeong at support. Only Kiin played every game in his role.

Afreeca Freecs haven’t looked perfect in Summer, but they have looked better. After constantly swapping in and out players in the Spring, AF have played the same starting five for all 24 games so far in Summer: Kiin, Spirit, Fly, Mystic, and Ben. While you won’t confuse them for a title contender anymore, AF have the look of a solid playoff team.

We win today's match against SP. We'll show a good performance on the next match. Thank you for supporting us today.

AF took another step toward qualification with a 2-0 win over SeolHaeOne Prince in week six. AF almost won via perfect game in the opener, conceding only one kill and one turret in a quick 28 minute win. Spirit earned his first player of the game in Summer, going 3/0/8 on Poppy for the team’s highest kill participation.

Afreeca Freecs built on that near perfect game one by winning game two in the fastest game in LCK history. Spirit’s Nidalee put the pressure on immediately, while SP’s scaling composition had no chance of making it to late game. Ben earned player of the game for his 1/0/11 Taric performance.

With the win, Afreeca Freecs are now 6-5 on the season and in fifth place. They are one match ahead of KT Rolster and SANDBOX Gaming for the final playoff spot, but also only one match behind T1 for a tie for fourth. Afreeca Freecs open week seven with a soft matchup against Hanwha Life Esports, but then face the league-leading DRX to close the week.

With only one win apiece entering week seven, Hanwha Life Esports and SoelHaeOne Prince would be in full panic mode in any other LCK season. The Korean league has long used a promotion/relegation system, meaning the bottom two teams from each split had to play the top two Challengers Korea teams in a short tournament to determine the final two LCK spots. Losers would move down to the CK for the next split.

However, the LCK’s move to a franchise system in 2021 has given the bottom of the league little reason to sweat their records. Sure, it might look better for their partnership application if they were more competitive, but only 21 organizations ended up applying for a franchise spot. Even if they aren’t chosen, SeolHaeOne Prince and Hanwha Life Esports will be given a buyout fee.

Hanwha Life have used this opportunity to give playing time to their trainees. Top laner Lee “DuDu” Dong-ju, jungler Cho “CaD” Seong-yong, and mid laner Jeong “Mireu” Jo-bin have all gotten more playing time than expected, earning starts over the more experienced Lee “CuVee” Seong-jin, Kang “Haru” Min-seung, and Kim “Lava” Tae-hoon. While we thought HLE would try to be more competitive with the addition of Park “Viper” Do-hyeon, HLE made their intentions known early by playing their youngsters early and often.

SeolHaeOne Prince has not taken the same approach. Though they’ve swapped between Choi “Mia” Sang-in and Park “Secret” Ki-sun at support, the rest of the lineup has mostly remained intact. Jeon “ikssu” Ik-soo and Son “Mickey” Young-min have been consistent starters in the solo lanes, while Lee “HyBriD” Woo-jin has started most games over Kim “Trigger” Eui-joo. The only recent change SP have made is starting Park “Kuma” Hyeon-gyu over Sung “Flawless” Yeon-jun against SANDBOX Gaming in week six.

As a relatively new organization, SeolHaeOne Prince may feel more pressure than Hanwha Life Esports to prove competitive to Riot Korea. Additionally, their lack of long-term contracts may have them uninterested in seeing what their substitutes can do on the main stage. Of the 12 players listed on their roster, only substitute mid laner Kim “Keine” Joon-cheol is signed past the end of 2020. Keine has started only one game in the Summer after starting 18 in the Spring. 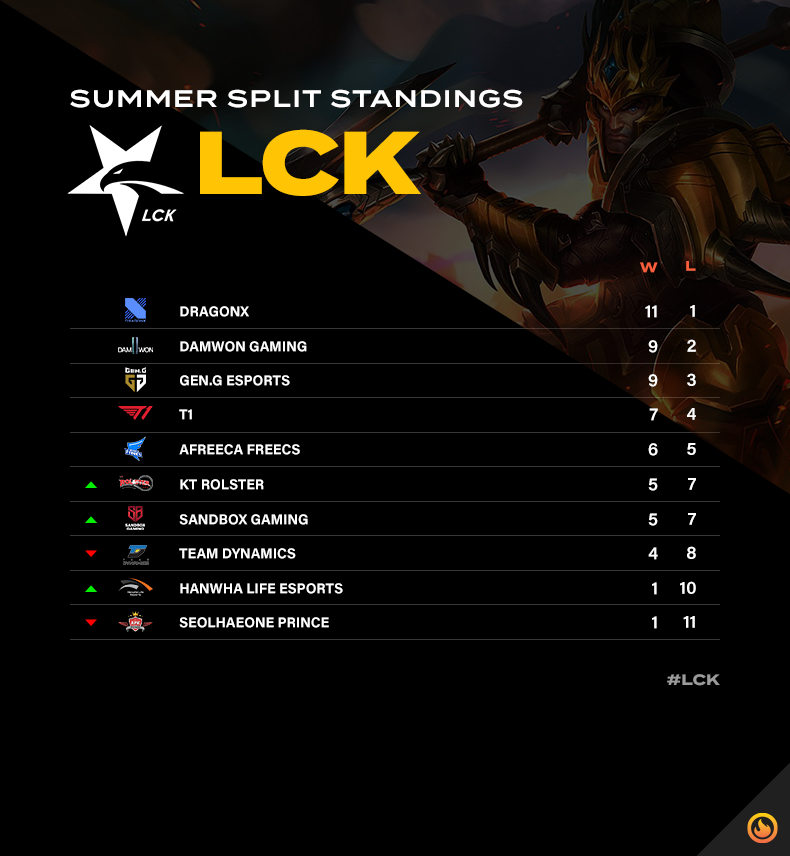 DRX retained the top spot after holding off Gen.G in a close 2-1 series. DAMWON Gaming remain in second place after beating the resurgent SANDBOX Gaming. T1 rebounded from their loss to Gen.G by beating Hanwha Life Esports.

Both Hanwha Life Esports and SeolHaeOne Prince are clinging to their lone victories at the bottom of the standings. Team Dynamics continued to tumble down the standings after a fourth consecutive defeat. SANDBOX Gaming and Team WE are pushing Afreeca Freecs for the fifth and final playoff spot.

A battle between the top two teams in the standings, a DRX win could go a long way to locking up the first seed in the LCK. A win over DAMWON Gaming would put them two or more games ahead of the rest of the league, while also locking down the tiebreakers over Gen.G and DWG. This will be a battle of top half versus bottom half strength. DWG will have a big advantage with Jang “Nuguri” Ha-gwon and Kim “Canyon” Geon-bu, but DRX will have a big advantage bot with Deft and Ryu “Keria” Min-seok.

These are two teams trending in opposite directions. T1 have looked lackluster in Spring after a poor performance in the Mid-Season Cup. Meanwhile, SANDBOX Gaming have looked reborn since the arrival of head coach Jakob “YamatoCannon” Mebdi in Korea. But to make the playoffs, SANDBOX will have to prove they can beat some of the better LCK teams. Recent losses to DAMWON Gaming and KT Rolster have called that ability into question. T1 need every win they can get to ensure they make the playoffs, as they are only two games ahead of the pack.