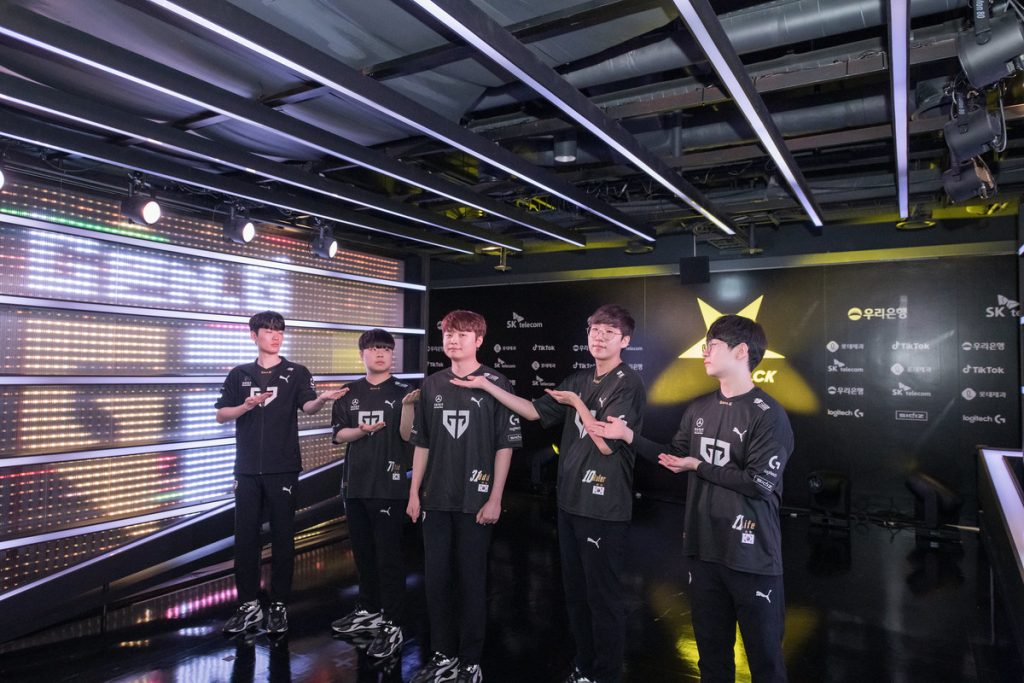 Bdd was the star of the show as Gen.G finally took down T1. (Photo courtesy Riot Games - LCK)

The League of Legends Champions Korea (LCK) completed their fifth week of the 2020 Summer Split. Gen.G finally overcame T1 in their last regular season meeting, while Hanwha Life Esports picked up their first win of the season. We take a look at where things stand in the LCK by looking at the top story lines so far in Korea.

When T1 beat Gen.G 2-0 in week three of the Summer Split, it was nothing new. T1 had shown dominance over Gen.G in all of 2020, winning both regular season matchups in the Spring Split before embarrassing Gen.G 3-0 in the Spring Finals. But the mastery of Gen.G goes deeper than that. Gen.G also lost every meeting against T1 in 2019, meaning that Gen.G had not beaten T1 since the 2018 Regional Finals.

Gen.G swapped out most of their roster between 2019 and 2020, so most of their players have not been involved in the streak, but the longer the streak goes, the more the players have to hear about it. That was certainly the case after Gen.G lost to T1 again in their first meeting this Summer, setting up a crucial week five matchup. Both teams are surely going to make the playoffs, but Gen.G needed to prove that they can beat T1 before they could think about having success in any tournament.

The start to round 2 of the LCK Summer Split feels extra good today as we take down @T1lol in a 2-0 match! Tune in to our IG live to celebrate the win with us! #GenGWIN

Gen.G did just that, getting over their T1 obstacle with a 2-0 win over the struggling T1. Park “Ruler” Jae-hyuk — the only holdover from the 2018 team that beat T1 — starred in game one, going 12/0/3 on Ezreal, including a quadra kill to end the game. His 34.7k damage dealt to champions almost doubled every other player in the game, earning him game MVP.

Gwak “Bdd” Bo-seong proved himself against Lee “Faker” Sang-hyeok in game two, playing Zoe into Neeko. Bdd may have only gone 3/2/9, but his early double kill on Kim “Canna” Chang-dong’s Camille and Moon “Cuzz” Woo-chan’s Olaf set the tone. He also hit several Sleepy Trouble Bubbles and Paddle Stars to poke T1 throughout, resulting in him dealing a game-high 23.1k damage to champions. Gen.G needed only 30 minutes to beat T1 15 kills to 10 and snap their two-year losing streak.

There’s no doubt that Gen.G will be more confident in facing T1 after their latest victory. Bdd confirmed as much after the match, telling Ashley Kang: “Through today’s victory, we might have a better showing [against T1] in the future, too.” Jungler Kim “Clid” Tae-min had his first good series against his former team, going 1/1/9 and 2/1/8 in the wins. Getting him comfortable playing against his former teammates will be paramount to Gen.G’s postseason success.

Gen.G won’t get to celebrate their victory for too long. They open week six against the dangerous Team Dynamics, then follow it against the league-leading 9-1 DragonX.

Hanwha Life Esports weren’t anything special in the Spring Season, but they weren’t terrible either. The team went 6-12, good for eighth place in a competitive league. HLE didn’t have a star-laden roster, but Son “Lehends” Si-woo is one of the best supports in the league. HLE were so thin at ADC, they started Oh “Vsta” Hyo-seong for the majority of the split. That’s not a knock on the player — Vsta’s natural position was just support. The combination of he and Jeon “Zenit” Tae-gwon didn’t get the job done, leading to the position opening up for the Summer Split.

Fortunately for HLE, a really good ADC became available. Griffin quickly lost in the promotion tournament, leading them to put all their players up for transfer. Park “Viper” Do-hyeon was the best of the bunch, and reuniting him with his former running mate in Lehends was a dream scenario. Going from Vsta and Zenit was easily the biggest single upgrade any team in the LCK made during the season break.

The moves did not pay off in the standings. Hanwha Life Esports lost their first eight matches of the season entering week five, and the team got blown out 2-0 by DragonX to open week five. Fortunately for HLE, a matchup against SeolHaeOne Prince was just what they needed to get get on the win column.

SP won the first game of the match as Son “Mickey” Young-man carried to a 3/0/7 Azir performance, casting doubt on HLE’s ability to win the series. But HLE bounced back, powered by their bot lane. The duo went deathless in both games two and three, with Viper going a combined 6/0/12 and Lehends a combined 1/0/23. DuDu was also important in the wins, going 4/1/8 on Wukong and 9/3/6 on Camille.

Even though this is now a lost season for Hanwha Life Esports, it’s easy to see why they started the season with their trainees in the starting lineup. After retaining their LCK spot by finishing eighth in the Spring, HLE don’t have to worry about that as the LCK moves to franchising to begin 2021. Instead, they could give their rookies valuable experience as the team tries to be competitive in 2021. Like Rogue Warriors in the LPL, it should also be valuable for HLE’s development to pick up a win, no matter how late in the season.

HLE will look to build on the momentum of their first win in week six. They’ll face the reigning champions T1 in their only match.

When SANDBOX Gaming beat Team Dynamics in week three in Jakob “YamatoCannon” Mebdi’s stage debut, we wondered if there would be a before YamatoCannon (BY) and after YamatoCannon (AY) to SANDBOX’s Season. As the wins continue adding up, it’s looking more and more like the effect that YamatoCannon is having on his team is undeniable.

After starting the season 0-5, SANDBOX Gaming are now 4-1 since the arrival of YamatoCannon. SANDBOX Gaming went 2-0 in week four, sweeping both Hanwha Life Esports and KT Rolster to edge closer to .500.

SBX then opened week five with a victory over SeolHaeOne Prince. SB went out to an early lead built from Yoo “FATE” Su-hyeok’s Syndra. FATE went 6/2/6 on Syndra, picking up three solo kills to lead SBX to a 23 kill to 11 win. SP rebounded to win game two, but FATE again came up clutch in game three. This time on Zoe, FATE played a nearly flawless game, going 7/0/5 while dealing a ridiculous 1,056 damage per minute. For reference, Heo “ShowMaker” Su has the highest average DPM among LCK mid laners at 593. SBX needed only 28 minutes to pull off the 17 kill to 1 win.

SBX then dropped their next match against KT Rolster, but that’s been their first and only hiccup since YamatoCannon arrived. So, what’s changed since his arrival? The team culture seems stronger, as Kim “OnFleek” Jang-gyeom intimated after week three. But YamatoCannon’s arrival also coincided with the first time SBX went back to the same starting lineup that won them the promotion tournament. FATE has been an integral part in carrying the time since his reinsertion back into the starting lineup, while Kang “GorillA” Beom-hyun quickly earned his starting spot back from a brief Jeong “Kabbie” Sang-hyeon stint.

SBX looked poised to continue using that same starting five for the rest of the season. They’ll look to get back on track with matches against DAMWON Gaming and SeolHaeOne Prince in week six. 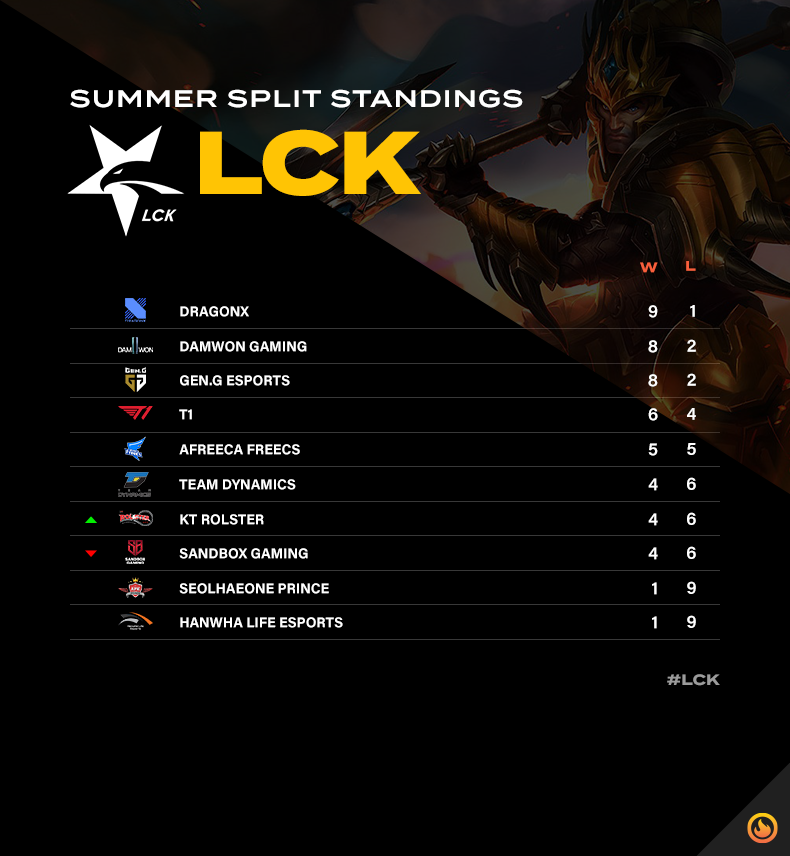 DragonX maintain the top spot after 2-0 week. DAMWON Gaming and Gen.G are right behind DRX at 8-2. T1 have fallen to a distant fourth after their loss to Gen.G.

Hanwha Life Esports picked up their first win of the season to tie SeolHaeOne Prince at 1-9. Team Dynamics, KT Rolster, and SANDBOX Gaming are all trying to track down Afreeca Freecs for the fifth and final playoff spot.

SANDBOX Gaming have been beating up on the bottom of the league during their resurgence, but now they’ll have a shot at one of the top teams in the league. SBX has been playing through FATE, which will make for a great matchup against ShowMaker. Even in a down year, Park “Summit” Woo-tae still has the mechanical talent to make top lane a fun watch against Jang “Nuguri” Ha-gwon.

If DragonX fall to KT Rolster earlier in the week, this could end up being a match for first place in the LCK. Gen.G finally overcame their struggles against T1. Now they’ll look to beat DragonX for the first time this Summer. Hong “Pyosik” Chang-hyeon is really coming on for DRX, but top laner Choi “Doran” Heyon-joon has become a liability. Gen.G will likely use Clid to attack Doran and try to snowball Kim “Rascal” Kwang-hee. Ruler against Kim “Deft” Hyuk-kyu is one of the premier ADC matchups of the year.