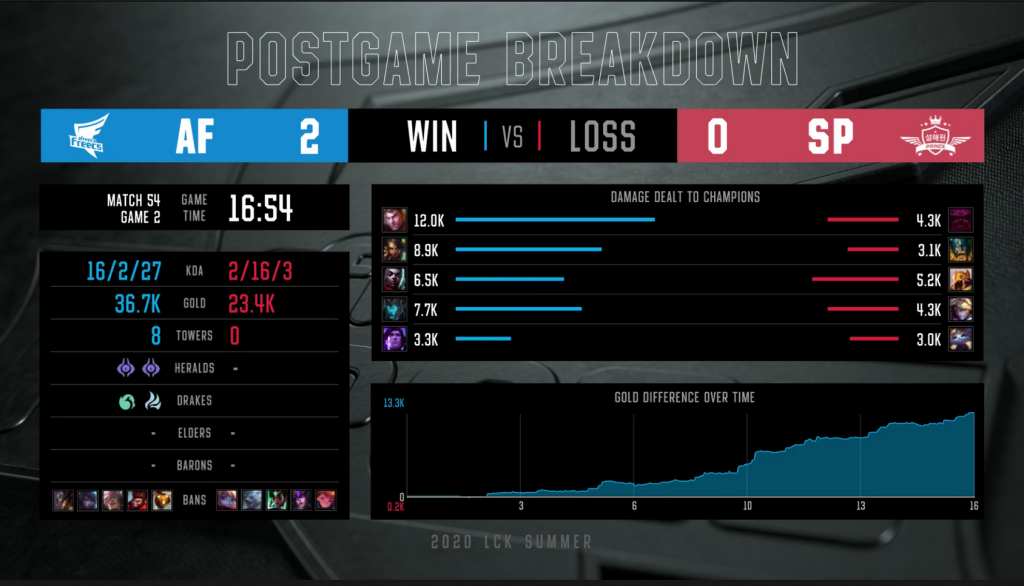 On July 24, 2020, the Afreeca Freecs made history by winning the fastest game ever played in LCK. Their victims were SeolHaeWon Prince, a team that has struggled throughout the entire Summer Split. Afreeca came into the match with a 5-5 record and were looking to take every win possible to ensure a playoff finish. SeolHaeOne on the other hand were on a 10-loss streak sitting at the bottom of the league table.

Game one went the way of Afreeca. Although the 28-minute victory was nothing to write home about, one thing was made apparent. Afreeca picked a late-game scaling composition with Kayle Ezreal and still almost managed a perfect game. The kill score was 14-1, AF had six major objectives to none, and nine towers to one.

With this knowledge, Afreeca went for a full speed run in game two. SeolHaeWon went for a heavily scaling composition themselves, picking up Ornn, Azir, Ezreal, and Yuumi. Afreeca’s response was a declaration of war. They slammed Kalista, Jayce, and Nidalee to make a composition that screamed early game domination.

The action started immediately, with Afreeca’s bottom lane getting a 2v2 first blood at just two minutes into the game. Flawless tried to relieve pressure from SP’s bot lane with a gank a couple of minutes later, but Mystic and Ben pulled off a 2v3 outplay which resulted in three more kills to Afreeca.

Afreeca’s lane kingdom continued until SP chose to contest Rift Herald. Their top side was unceremoniously wiped from the map, resulting in three kills, a Herald capture, and first turret. Afreeca held a 5K gold lead at the ten-minute mark.

No big team fights happened for the rest of the game. Afreeca essentially just ran around the map taking what they wanted while slapping the occasional badly positioned SP member with their wallets. All 15 turret plates were taken, resulting in an extra 2400 gold for Afreeca.

At 14 and a half minutes in, Afreeca razed the mid Inhibitor and ran to the second Rift Herald with a 10k gold lead. After taking her down, the Freecs stormed SeolHaeWon’s base and ended their suffering in 16:54 to take the all-time record for the fastest game in LCK.

The previous record-holding game took place in Summer 2012. Najin Shield took down GJR in 18:44, a time that has now been eclipsed by almost two minutes. While Afreeca is still currently a middle of the pack team in LCK, their ability to stomp the bottom half is always a joy to watch.

This was the first sub-20-minute game of LCK Summer 2020. Games of this length almost never happen, and the sheer dominance of Afreeca’s team composition in the early game added a unique set of circumstances. This record will likely stand for a long time to come.