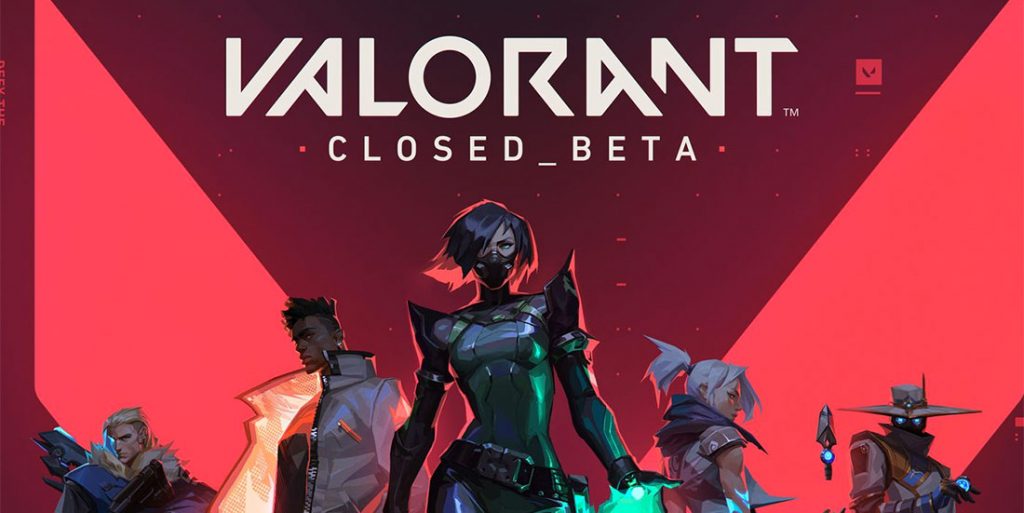 Every Agent has a unique set of abilities that can be used to dominate the enemy. (Photo courtesy Riot Games)

The full list of Agents in VALORANT has finally been revealed and features a diverse group of playable characters. Some Agents are perfect for defense while others have the tools to sneak behind and cause havoc on unsuspecting enemies. There is a character for every type of player in VALORANT, so here is a brief guide on their abilities to help you decide which one you want to dive into first. 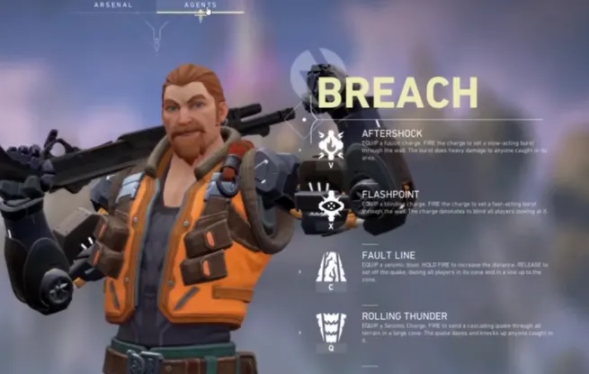 Breach’s Aftershock ability fires a fusion charge that can only be used on walls. The blast causes significant damage on players on the opposite side of the wall.

The red headed character’s Flashpoint ability must also be used on a wall and detonates on the opposite side, much like his Aftershock ability. This ability blinds all players who look at the blast which is very similar to how flashbangs work in other games. This ability would be perfect for taking bombsites in “Search and Destroy” game modes.

Breach’s final two abilities are great tools to clear lanes or enemies that are grouped together. The Fault Line ability releases a quake that stuns enemies caught in the path, and the longer the button is held, the further the quake will travel.

Breach’s final ability is called Rolling Thunder and fires a stronger quake which dazes and knocks up players in caught in the blast. 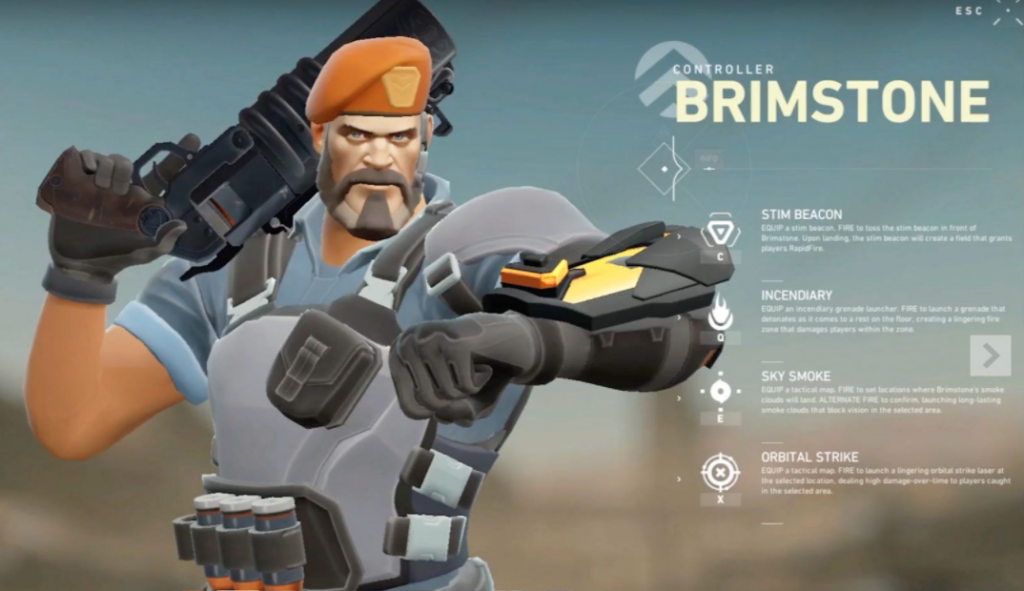 Brimstone’s Stim Beacon is a unique ability that gives anyone in the immediate area rapid fire for their weapons. This can be a huge advantage for teams holding a site who can lay down intense fire on a pushing enemy team.

His Incendiary ability is a grenade launcher with Incendiary rounds that can bounce off walls and deliver a lot of damage. When the grenades explode, the surrounding area is engulfed in flames and damages anyone caught in the circle. These can be used to clear out rooms before entering by bouncing grenades or to flush out campers. They can also be used to prevent an enemy team from pushing into an area or objective.

Brimstone’s Sky Smoke ability allows the player to mark a location on the VALORANT map and drop three smoke grenades on the targeted area. This can be great for teams pushing a site as it gives them cover from the defending team or buy them time in escaping a bad situation. The ability to call it in anywhere on the map is also huge as the Brimstone player does not need to be in the immediate area to help their team.

Brimstone’s final ability is an Orbital Strike which can be called in on any location in the map, like the Sky Smoke ability. Anyone caught in the blast radius takes intense damage and it is a great tool to hit enemies in protected positions. 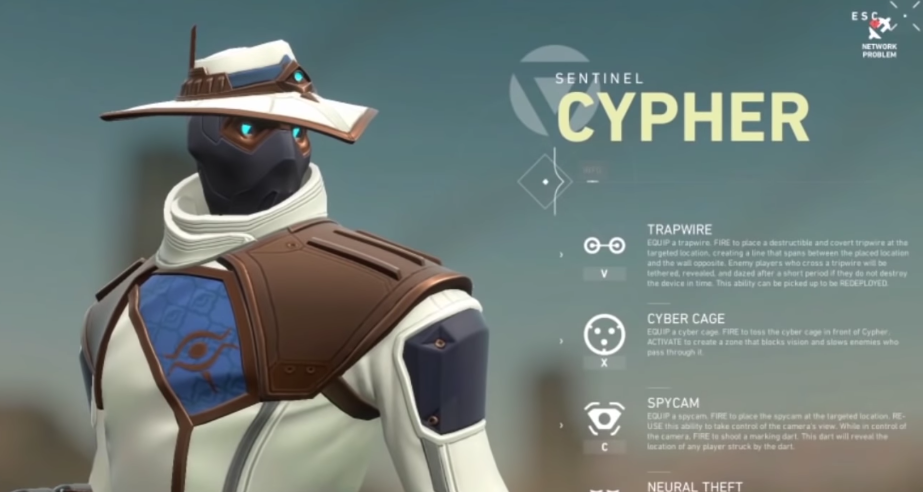 Cypher’s Trapwire ability allows players to place explosive devices on entrances and doorways. The device deals a lot of damage on unsuspecting players and can help cover open entrances and pathways. Players also can recall the Trapwire just by looking at the device and pressing their action key which is convenient and quick and allows players to adapt their defense throughout a match.

The Cyber Cage ability is a deployable cover device that protects anyone inside the circle from damage. Players inside the Cyber Cage cannot see out, but they can use it to escape enemy fire in a pinch. The only downside of the device is that it does not activate after being deployed and players must directly look at it and manually activate it.

Cypher’s Spycam ability lets players deploy a camera anywhere on the map that they can use to track enemies’ movements. They can also mark enemies with a dart that will reveal the location of the marked player.

The Neural Theft ability requires a dead enemy but is one of the most powerful abilities in the game. If a Cypher player can find an enemy body, they can use Neural Theft to locate and mark the location of all other teammates on their team. 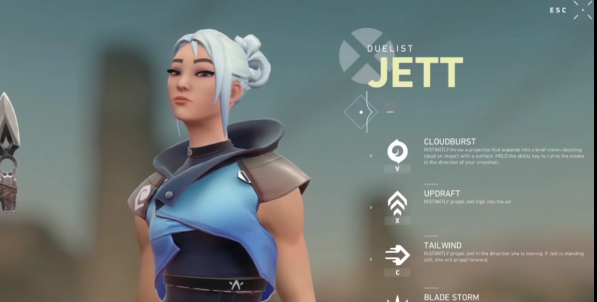 Jett’s Cloudburst ability is a throwable projectile that turns into a vision blocking cloud on impact. Players can launch the projectile normally by pressing the button once, but they can also guide the flight path of the Cloudburst by holding down the button.

The Updraft and Tailwind abilities let players propel themselves into the air and dash forward. These are great ways to get out of harm’s way or move quickly throughout the VALORANT map, but players can only use the ability twice per round and must be careful on when they use it. Most abilities have a cooldown or limit on their uses per round, so keep that in mind when using them.

1v5…
Save round…
They already planted bomb…

This is the most insane Valorant clutch ever… pic.twitter.com/WdT7C8Ww9c 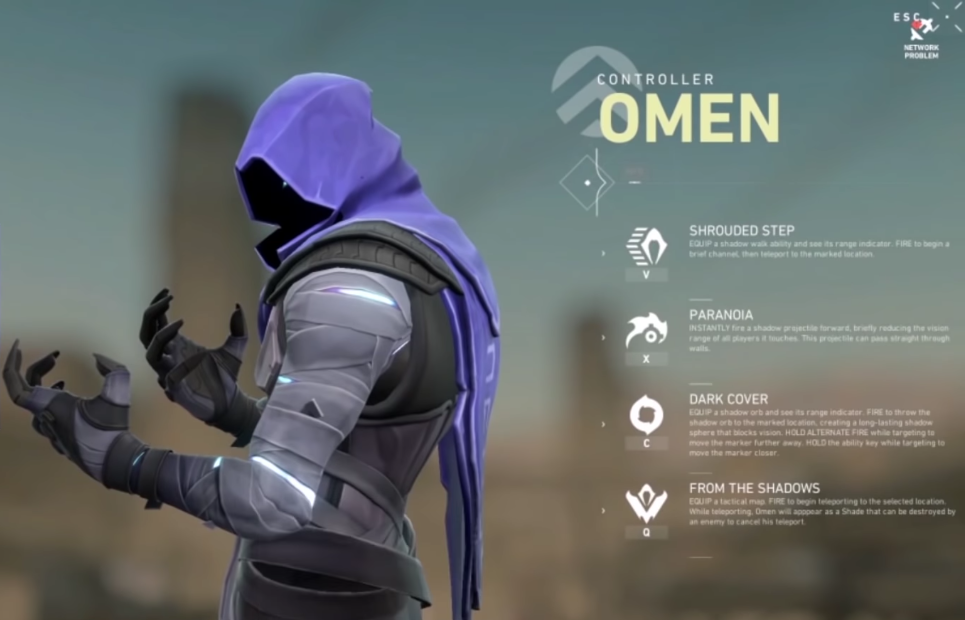 Shrouded Step lets players teleport to locations in their immediate area. This can be used to reach high locations so as rooftops and ledges.

The Paranoia ability fires a dark cloud that move through walls and stun any enemies caught in its path. This is a strong ability that can stun multiple enemies in several locations with little risk.

Dark Cover is a defensive ability that lets players deploy a dark cloud of cover. The cover’s placement is determined by the player and can be used to help teammates in the distance if needed.

Omen’s From The Shadows ability allows players to teleport to any location on the VALORANT map and get the jump on unsuspecting players. This can be used to get behind enemies as soon as the round starts or to move between objectives quickly.

Phoenix’s Blaze ability creates a wall of flame that obscures lines of sight and damages any players who walk through it. The wall of flame heals Phoenix, however, so players can use to regain health if necessary.

The Curveball ability lets players throw a fireball to the left or right which blinds all players in the area. This is a great tool to blind players around a corner as the fireball curves in the direction the player selects.

Hot Hands allows players to throw or lob a fire ball that explodes upon impact and burns anyone in the immediate area. Players can use this to damage players or hold off a push if necessary. This also heals Phoenix and can be used to regain health if necessary.

The Run it Back ability allows players to place a marker where they will teleport back to after a set period. This is great for players who want to push or attack an enemy but want to be returned to safety after causing damage or confusing the enemy team. Players who die during this time will also be respawned at the marker with full health, so it can potentially let players do take out enemies in an initial push and help their teams on the full take of a site after respawning. 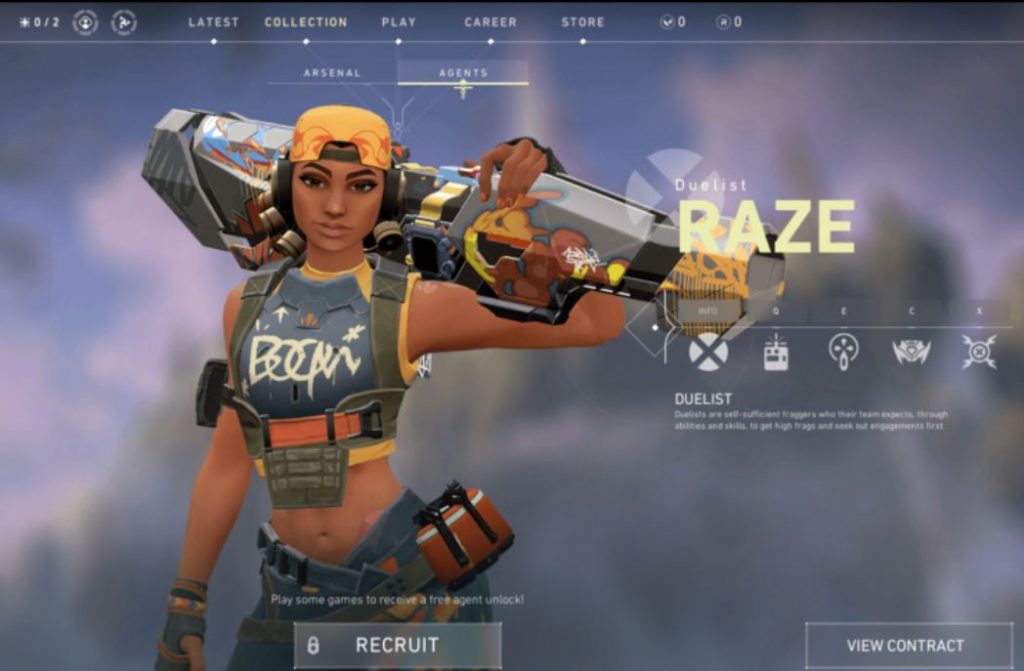 Raze can deploy a Blast Pack that sticks to surfaces. Using the ability again detonates it, doing damage and knockback in a small area. Raze can use this ability to move herself, allowing for boosts and mobility. Think similar to Junkrat’s mines from Overwatch.

With Pain Shells, she throws a grenade which explodes in a moderate area, then drops many sub-munitions which deal damage to enemies in range. The projectile throws in an arc and detonates after a set time.

The Boom Bot ability deploys a small motorized robot which travels in a straight line on the ground. The robot can bounce off of walls. If Boom Bot sees an enemy, it will lock onto and follow them, exploding for heavy damage if it reaches them.

Showstopper give Raze a massive rocket launcher on her back. She can fire it once, dealing massive area-of-effect damage on contact with anything. This ability in VALORANT screams Jinx ultimate from League of Legends. 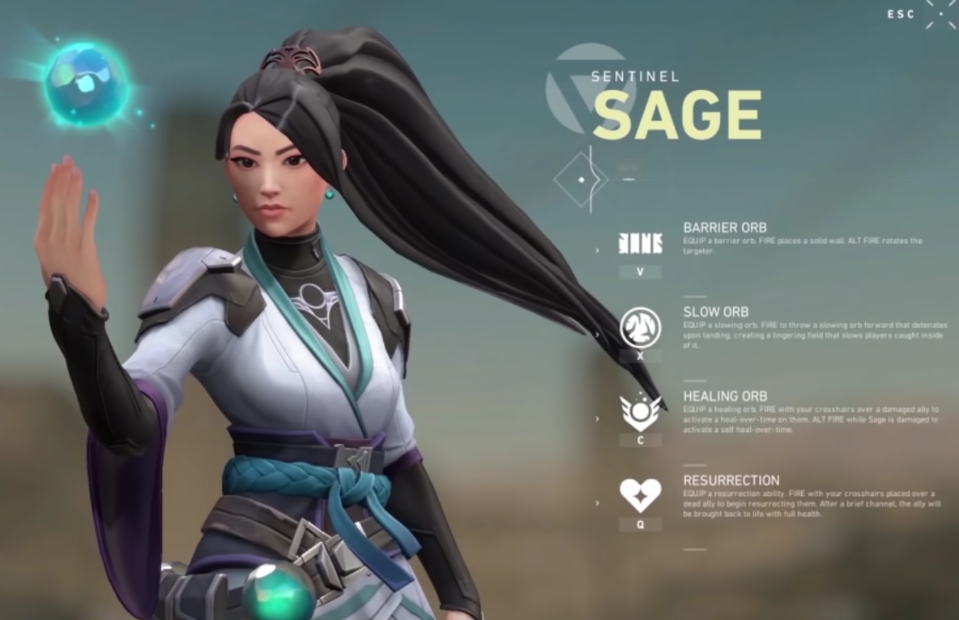 The Barrier Orb ability lets players create a rotatable wall of solid cover that can block lanes and protect their teammates. The walls can be broken with other weapons or abilities, but they can buy time that lets players escape or rotate safely.

The Slow Orb ability is a projectile that explodes and covers the area in a blue substance that slows down any enemies walking through it. The area slows Sage and her teammates as well so be careful when using this ability.

The Healing Orb ability lets Sage heal her teammates and herself if needed. The orb can be launched at teammates to heal them from a distance or activated in Sage’s hand to self-heal.

Sage’s Resurrection ability allows players to bring a teammate back to life with full health. This is a strong ability that bring allies back from the dead and turn the tides of around in your favor. 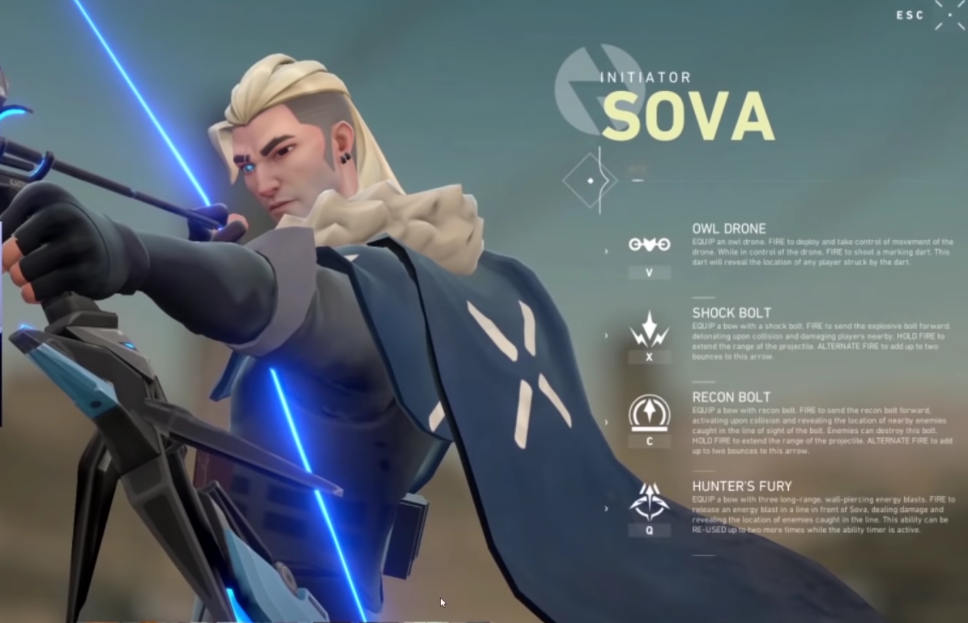 Sova’s Owl Drone is a controllable drone that players can use to find and mark enemies. The drone fires darts that show enemy locations on the VALORANT map when they are struck by the dart.

The Shock Bolt ability lets players use an electric bow and arrow that delivers a large amount of damage to enemies. Players can cause the arrow to bounce once or twice which can be used to damage enemies behind cover that cannot be directly hit.

The amount of hours I am going to put in to Valorant is going to be insane. I have so much to learn and perfect, most fun I’ve had gaming in awhile. pic.twitter.com/wL6Gu63EHu

Sova’s Recon Bolt activates upon collision and marks all enemies in the line of sight of the bolt. Enemy players can shoot the bolt, so players should try and shoot it into an unsuspecting area to go unnoticed by enemy players.

The Hunter’s Fury ability lets players kill enemies with an arrow that can go through any walls. This can be used together with the Recon Bolt for deadly results. 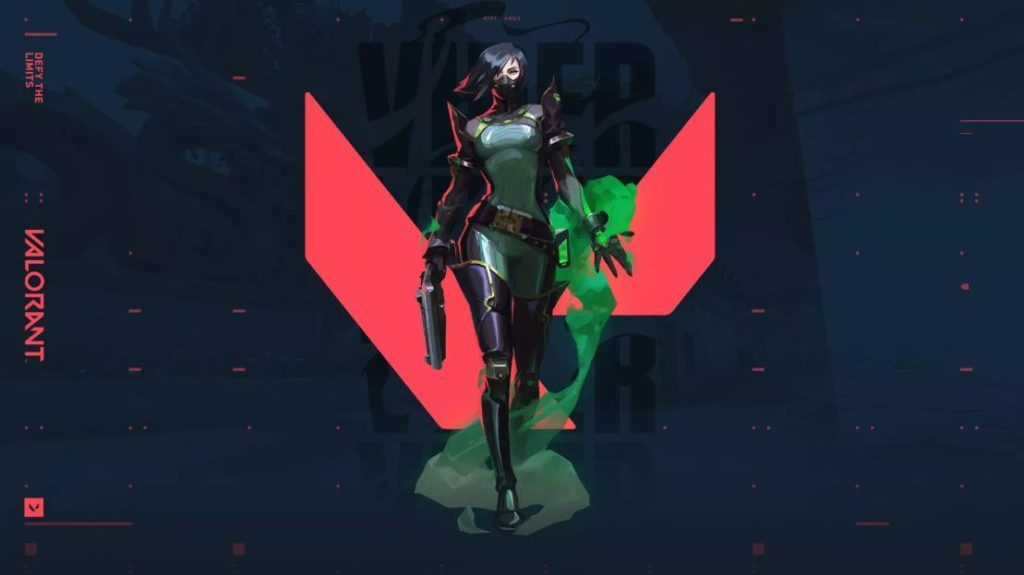 Viper’s Snake Bite ability equips a chemical launcher that shoots poisonous liquid that covers the ground upon impacted. Enemies that step into the green chemicals take damage and are slowed down. This is a great way to prevent pushes or protect objectives after the bomb is planted.

The Poison Cloud ability lets players deploy a toxic cloud that blocks lines of sight and stays active throughout the round. The ability can be reused if needed, but the original cloud will disappear.

Viper’s Toxic Screen ability works like the Poison Cloud and creates a green barrier that obscures lines of sight. Both can be activated at the same time to block off an entire area with poisonous gas. This ability can also be reused throughout the round if needed.

Viper’s Pit covers a huge area around the player that damages any enemies caught in the poisonous gas. The gas will stay up for as long as Viper is inside the area and damages and obscures the vision of all players in the area.

All the Agents in VALORANT can be used in a wide array of scenarios and can turn the tides of round very quickly. Each character has strong abilities that make them viable choices, and team compositions will likely form once players get their hands on the game. Make sure to give every VALORANT character a try to find the perfect Agent that matches your playstyle and lets you dominate the competition.