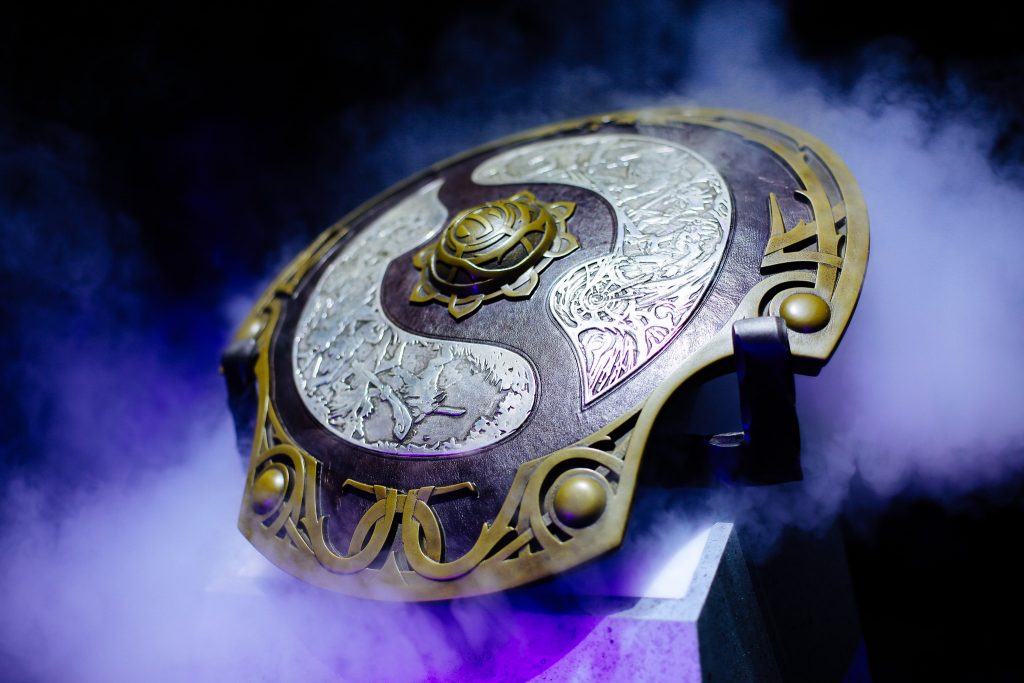 The biggest of all esports tournaments is approaching fast.  This year, The International will take place in Shanghai, China and start on August 15. So far, no player or team has been able to raise the Aegis, the most prestigious trophy of the Dota 2 world, twice.

Who could be the first to hold the Aegis again? Let’s have a closer look at those few who strive to become heroes:

Starting his Dota 2 career with Natus Vincere, Puppey was part of the legendary first-TI-winning squad. He remained on Na’Vi as a captain until he founded his own organization after TI4: Team Secret. Team Secret quickly became a household name in the Dota 2 scene as being an all-star Team.

So far, all attempts to gather a TI-winning roster have failed. This year, Team Secret dominated the Dota 2 Pro Circuit rankings right from the beginning of the season. After putting nearly 20% of all available DPC points into their pocket, Puppey is now on a TI-favorite team and could be the first person to raise the Aegis twice.

Famous for his Puck game in the Grand Finals against NaVi at The International 2013, s4 is a well-known core player, mostly in the mid lane. After a disappointing result at TI4, he joined Puppey’s newly founded Team Secret before returning to Alliance as a captain in 2015. The old teammates did not achieve any noticeable results and, in 2016, s4 left Alliance to join OG.

With OG, s4 won the Boston Major, the Kiev Major and MDL Macau, playing in the offlane. In May 2018, the news about he and Tal “Fly” Aizik joining Evil Geniuses right before the roster lock for TI8 shocked Dota 2 fans. Unfortunately for s4, it was OG who won the Aegis while EG finished in third place.

With that said, the EG roster has stuck together and earned enough DPC points for the direct TI invite this year. Let’s see if the boys in blue make s4’s dream come true: standing on the top of the Dota 2 world again.

The young SumaiL joined EG in January 2015 after making a name for himself as a new talent in the North American Elite League. As a mid player, he played a big part in winning The International 2015 on home ground in Seattle in the same year. His incredible comeback plays in the last series boosted the confidence of EG, leading to them holding the Aegis in their hands. Since then, SumaiL has been known for his dominant mid lane playstyle and his builds on Shadow Fiend and Storm Spirit.

Today, SumaiL is the only player of the TI-winning roster left on EG, surrounded by top tier Dota 2 pros like s4, Artour “Arteezy” Babaev, Andreas “Cr1t” Nielsen and Fly. They’ve done well during the DPC season, and even without winning a Major, EG still have what it takes to win TI. SumaiL would like to add another record to his name – not only the youngest, but also the first two-time winner of The International.

When EG was coming back to Dota 2 in 2014, ppd was there to take the captain’s position.  From the very beginning, he was known for his drafting abilities and strategic thinking. These strengths combined with the skills of his teammates to make EG the team to beat from 2014-2016.

In 2016, ppd stepped back and became CEO of EG, but Dota 2 was not done with him. He started to build a fun-to-play squad called “WanteD” and began commentating, streaming and appearing on panels at offline events. Ppd could not resist, he built a new team, which was acquired by OpTic Gaming. For this year’s season, he assembled a squad for Ninjas in Pyjamas and qualified with enough DPC points for The International 2019.

Before TI7, Team Liquid has been named as the favorites to win as they achieved to finish 1st place at StarLadder, Epicenter and DreamLeague. Their start at TI7 was awesome. Team Liquid did not drop a single map in the Group Stage but lost their first playoff round, followed by an incredible run in the Lower Bracket to the Grand Finals. KuroKy’s squad dominated the best-of-five against Newbee and raised the Aegis finally.

This year, the team struggled after TI8, coming back at the MDL Major in Macau. But KuroKy wanted to change things, as he felt the gameplay has become too predictable for their opponents and right before the last Major of the season, MATUMBAMAN left the TI winning roster after four years to be replaced by Aliwi “w33” Omar.

For this year’s The International in Shanghai, Liquid may not be the top favorite, but KuroKy is definitely a captain who could do the impossible. Along with his mates, Miracle-, MinD_ContRoL and GH, they could also be the first team to win the second time, which would cement the name of the organization as one of the best in the esports world.

Leaving Team Liquid right before the last Major of the year, MATUMBAMAN joined Chaos Esports Club, an organization that had played in the South American region with a Brazilian squad but moved to Europe with a new roster in May 2019.

MATUMBAMAN is known for two things in the Dota 2 world – his performance as a carry player especially on Broodmother and his TI-winning shorts. In his interviews, the Finnish player is always smiling and happy; he seems to enjoy Dota and his life.

Being left without a top tier team so close before TI qualifiers, MATUMBAMAN did what he can do best, carrying his team to victory. As one of only two invited teams in the European Closed Qualifier, Chaos Esports Club won their TI spot with a clean sweep 3-0 against The Final Tribe.

Can MATUMBAMAN pull off a similar story to OG’s last year?

OG’s run at TI8 was something for the history books. Coming from the deep grind of Open Qualifiers, winning the Closed Qualifier flawlessly and stomping through the upper bracket to win the Grand Finals with a hastily put together roster excited fans and spectators all over the world.

It was against all odds and is now one of the greatest Cinderella stories in esports history. But can OG pull out another run like this again? This year had no Major win for the team, no convincing tournament win.

Maybe it is exactly this underdog role that let this team shine again. Winning again would secure these players an almost divine status in the history books of esports.

WE ARE GOING TO TI

Like Puppey, Loda is a Dota 2 legend—on the top of the world with his team Alliance against NaVi in the Grand Finals 2013, a series of games considered the best of all TI Finals so far.

Alliance was doing great but never could reach a top result at TI again. Loda actively played as the team’s captain until 2017 and came back as a coach 2018, helping to bring back Alliance to former glory. In the end, it was a game against Gambit Esports in the last Major of the year, Epicenter in Moscow, in the lower bracket that secured Alliance enough DPC points for the direct invitation to The International 2019.

This win will give Loda the chance to be the first player to win the trophy as a player and as a coach.

This name is engraved on the Aegis together with all other EG members since 2015, but Aui_2000 will be remembered as the guy who was kicked after winning TI.

Aui_2000 was part of several Dota 2 rosters but could not win any other big tournament. Like Loda he returns to The International as a coach—winning the NA Qualifier with Forward Gaming, who became Newbee after the organization had to shut down due to a financial breakdown.

As a Dota 2 player, BuLba has had great moments at TI so far. His unbelievable Clockwork game on Team Liquid versus LGD in 2013 is an iconic moment in TI history. But his greatest success at The International was coaching EG in their winning year. He also coached EG to third place in 2018, and now he’s coming back to the biggest stage of them all as a coach in 2019.

BuLba could be the first coach to win two Internationals.

As a player, Heen was loyal to the South Korean organization MVP in different branches, but his success starting with coaching Team Liquid. He joined KuroKy’s team in 2016 and worked for Team Liquid during their heydays till late 2018 including the TI winning August 2017.

TNC Predator announced Heen in the coaching role for the team in April this year. Together they managed to qualify via the DPC ranking, which gives Heen the opportunity to raise the Aegis again.

So far, 70 different teams have attended The International (4 of them could not make it out of the WildCard phase) and none of them could win the trophy twice. Who of the eight winners so far may repeat the incredible story?

Winning the first TI in 2011 laid the foundation of a legendary organization. Even more, NaVi dominated the early games of Dota 2 with 3 consecutive Grand Final participation at TI. Unfortunately, they never succeeded again and in recent years NaVi was searching for the magic potion to return to the top of the Dota 2 world.

The Swedish squad won 2013 in the legendary  El Classico rivalry with NaVi in an epic battle. After missing the last two years, Alliance secured their spot in the last Major of the season, the EPICENTER Major, in a direct duel against Gambit Esports. This year, the scene might see El Classico at TI again.

The Chinese roster of Newbee failed in the Closed Qualifier but the organization took another chance to be the first two-time winning org in Dota 2 history – Newbee signed the released roster of Forward Gaming as the American organization collapsed due to financial issues. Can the North American squad help the Chinese organization claim the Aegis again?

Winning TI on home ground is something special – and it is only EG who has experienced this so far, back in 2015. This year, EG will travel to China to become immortal and win The International a second time.

It was the most stable roster in Dota 2 history so far – nearly 3 years the mates stuck together and won the Aegis in 2017. With the carry-player change close before the qualifiers, the team achieved the first goal: to become more unpredictable. Is this enough to reach the top of the mountain again?

Another year, another Cinderella story? After the miraculous run last year, the team struggled to keep up the top results during the season. Bringing back ana again and reforge the successful squad, OG is on a mission: not only winning TI twice as an org, but doing it back-to-back.

You can watch these players and teams battle it out in the group stages of The International 2019 beginning August 15. Tune into Twitch to catch the action, and check back with Hotspawn for recaps and updates!

Dota 2 Other
Share
Joe Gstettner
Joe started playing games in the pre-C64 era and keeps it up until today. Due to his professional background, he loves to play with numbers, statistics and to gain some insights about players performances.
Follow me