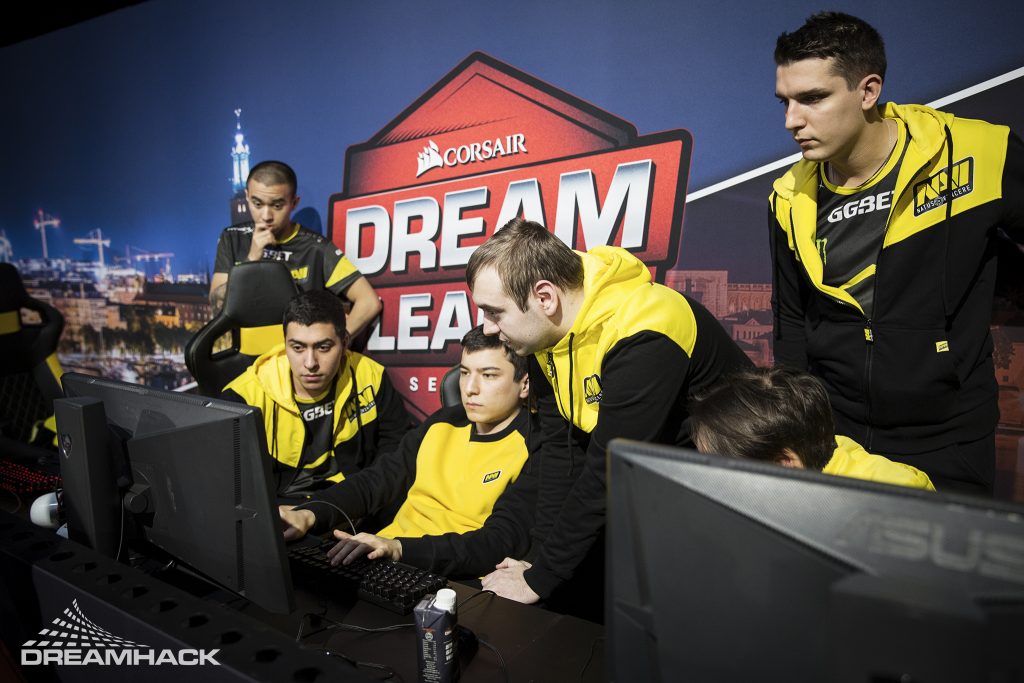 A fan-favorite organization, Natus Vincere is ready for success with a new generation of players. (Image via DreamLeague / Photo by Jennika Ojala)

When we look ahead to The International 2019, we’re reminded of all those who have won The International in the past. Natus Vincere were the first to inscribe their names on the Aegis, back in 2011. It’s been a long road since then though, and now this much-loved organization is looking to prove they have what it takes with an entirely new roster. Let’s take a closer look at Natus Vincere!

How many golden cards do you have? Share your screenshots with us! #navination pic.twitter.com/S1NYXbjiZD

When looking at the history of Dota 2, Natus Vincere figures heavily into the early years. They were the winners of The International in 2011, and second-place finishers at the following two TIs. And though the success of the team waned following TI3, fan-favorite player Danil “Dendi” Ishutin stuck with the team.

Dendi left the active squad in September, making way for a complete roster revamp. It was time, both for Dendi to shake things up, but also for Navi to revitalize the roster. It hasn’t been smooth sailing, however. The new team was built around Crystallize and SoNNeikO, who has taken the captain’s seat. The squad chose to make a roster change, bringing in Zayac in the greedier support role in April. This was after playing at only two Dota 2 Pro Circuit events by that stage of the year.

That late-season roster change gave the team a month to gel before the last qualifiers of the year, but it wasn’t nearly enough time for them to overcome beasts like Virtus.pro and Gambit Esports. Even Winstrike Team had the jump on Natus Vincere, taking the qualifier for the last Minor of the year. Safe to say that when it came time for the CIS qualifier for The International 2019, Navi was not the favorite to win.

Apparently, Natus Vincere did not get that memo. They went 4-3 in the group stage of the CIS qualifier, barely making it into the playoff. They were immediately beaten by Vega Squadron, who went 7-0 in the group stage. But Navi did take a game off Vega, and maybe that was the kickstart they needed. Navi ran through the lower bracket, coming back to defeat Vega Squadron in the lower bracket final to face Winstrike Team in the grand finals. A quick 3-0, and Natus Vincere had punched their ticket to TI9.

Long-awaited VLOG from the bootcamp of our Dota 2 roster! Final matches at the #TI9 CIS quals, victory, emotions and team talks. Let's watch how it was from the inside!

One of the best aspects of Natus Vincere’s qualification is that long-time fans of Dota 2 could be treated to the ultimate nostalgia match-up: Natus Vincere versus Alliance. El Classico. You’re bound to hear the phrase more than once over the weeks of TI. The International 3 and the months surrounding, featured many prominent Navi versus Alliance match-ups, with the TI3 grand finals the most prominent of them all. The rivalry was a treat “back in the day,” and it would be great for Dota 2 to see the new generation of these two squads face-off and form their own rivalry.

Natus Vincere head to TI9 without expectations weighing them down. They’ve had plenty of time to strategize and scrim, to determine how best to capitalize on Crystallize’s beastly carry play, and how to overcome their 17 opponents. The fans are ready, Natus Vincere better be too!

It won’t be long before Na-Vi! chants fill the air at the Mercedes-Benz Arena in Shanghai, China. And for many Dota 2 fans, that’s a beautiful thing.