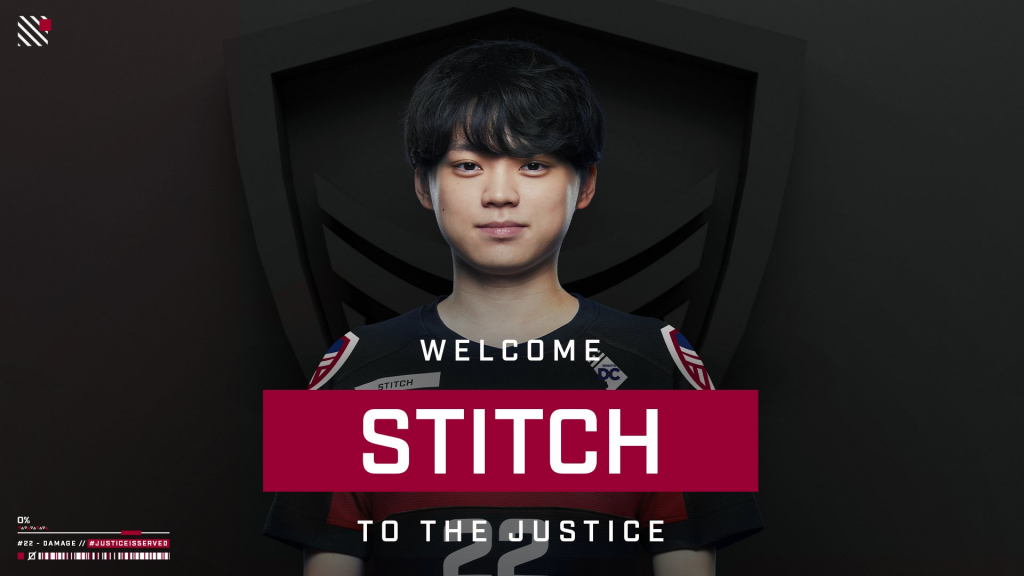 The Washington Justice have signed DPS player Chung-hee “Stitch” Lee to a long term contract, according to a Twitter announcement made by the Justice on Monday. After being released by the Vancouver Titans in May, Stitch played for the Justice on a two-week contract during the recent May Melee tournament. With Monday’s move, Stitch is now a permanent member of the Washington roster.

We are thrilled to announce we have signed @Stitch__ow to a long term contract!

Please join us in welcoming him home to DC!

The Justice signed Stitch to help replace their star DPS duo Corey “Corey” Nigra and Ethan “Stratus” Yankel, both of whom retired from OWL competition in May. Stitch played with Washington during the May Melee tournament, and although they lost 0-3 to the Gladiators in the Friday knockout tournament, Stitch performed well throughout the match.

Stitch is one of the most highly respected DPS players in the Overwatch League. Although he specializes in hitscan heroes, Stitch is also well known for his flanking DPS play with characters like Tracer and Sombra. He will play alongside the Justice flex DPS and rookie player, Ho-Sung “TTuba” Lee, in the DPS starting lineup.

Stitch started his Overwatch career back in 2016 as a part of the original Korean Contender’s RunAway roster. RunAway experienced unprecedented success throughout the early years of professional Overwatch, taking high placements in a variety of Contenders and APEX events. Their success drew the attention of the Vancouver Titans expansion team, who were looking for a roster to sign at the time. Stitch was signed by the Vancouver Titans in 2018 along with the rest of the RunAway team.

After an incredible 2019 season, in which the Titans won the 2019 Stage 1 play offs and placed second in the Season 2 Grand Championship, the Vancouver Titans relationship with the RunAway roster soured. After months of rumors of unrest and conflict between the players and the Titan’s organization, the entire RunAway roster was released in early May, leaving Stitch and his teammates available for other teams to sign.

The Overwatch League is still on hiatus following the May Melee. The upcoming schedule has yet to be announced, but you can expect the Washington Justice to return to competition on the weekend of June 13th-14th.