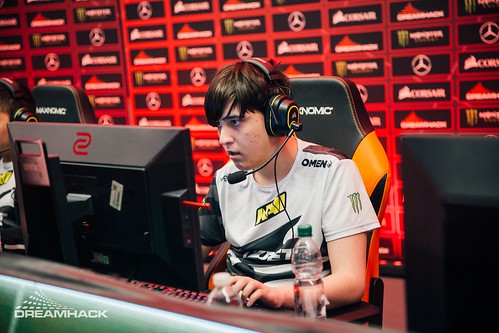 After a thrilling first day of games in the Europe and CIS portion of the ESL One Los Angeles 2020 Online tournament, day two started off by delivering another pair of superb games. The opening match pitted tier-two upcomers, EU’s Chicken Fighters, and CIS’s Team Spirit, against each other in another brutal inter-regional contest.

After that, a surprisingly tightly contested battle broke out between CIS legends Natus Vincere, and the recently re-bannered Team Unique stack. While on paper, all money would have been on Na’Vi and their veteran lineup, when it came down to it, Team Unique was able to show up the CIS team on at least one occasion.

In an evenly matched first series, Team Spirit’s experience gave them the advantage in the early game, as they managed to punish both Charlie “CharlieDota” Arat’s Terrorblade and Ondřej “Supream^” Štarha’s Leshrac. Yet despite these deaths, the Chicken Fighters were able to transition into a far more dangerous mid and late-game team. In particular, after a sloppy death in lane, Supream^’s Leshrac began to pop off, and in combination with the fed Pangolier, were able to catch out and kill their opponent’s. What followed was a slow death for Team Spirit, who were never really in this game to begin with.

Looking to prevent a sweep, Team Spirit attempted to extend the laning phase, which had proved effective for them. Picking up a pair of late scaling heroes in Lifestealer and Nix Assassin, with some early game power from Timbersaw, Spirit prevented their opponent’s from even playing the game for much of this match. Combined with the zoo build-up from Nature’s Prophet, Chicken Fighters found themselves losing at every stage of the game. In a complete role swap from the last game, it was the Chicken Fighter’s turn lose to slow methodical push.

Looks like the shoe's on the other foot now! 👞 @Team__Spirit take Game 2 against Chicken Fighters 👏#ESLOne
📺 https://t.co/RUTJQihdBh pic.twitter.com/fv8Yrf1ins

In the final match, genuinely anyone’s game. Both these sides had proved able to capitalise on a good draft and turn it into a win. But sadly for Team Spirit, they’d simply get out drafted and outplayed in this game. With their mid Ember Spirit losing in dramatic style, and Chicken Fighters able to push with impunity, there was nothing Spirit could do. The team taps out after 28 minutes, bringing an end to this series.

This is some impressive Dota from Chicken Fighters! Will it be enough to defeat @Team__Spirit? #ESLOne
📺 https://t.co/RUTJQihdBh pic.twitter.com/9LmGpjvqMG

These three games demonstrated how talented these tier two teams could be. What was most impressive perhaps wasn’t the gameplay, but the depth of the hero pools of each squad. A huge variety of heroes were played in this matchup, and to an exceptionally high level. It’ll be exciting to see what these teams can do.

The recently re-signed roster of Team Unique was previously under the forZe banner until their release earlier this in the month. Now this stack, playing under with a new organization, is playing with a chip on their shoulders, and against Na’Vi, came into this match swinging.

After an initially slow start to game one, with every core seemingly getting all the farm they needed, Unique began to dominate. They forced their opponent’s into bad trades, with their potent combo of Riki, Bristleback, and Pangolier cleaning up kills left and right.

Egor “19teen” Lexutinm, one of the youngest players in the tournament, put on an incredible performance on his Bristleback. Even with his premature item drop taunting in the enemy base, this youthful player was one of the key reasons for Unique’s advantage. But by holding on and punishing every slight mistake by Unique, Na’Vi pushed the game to 40 minutes, finally taking a gold lead for the first time in the game, and looking like they could take the match.

However, a ridiculous fight outside Unique’s base led to disaster for Na’Vi. Slark had just used his gold pick up an item, and couldn’t afford buyback as Unique marched down the lane to win the game. However, after Na’Vi just managed to hold on, only for them to lose the final fight of the match in dramatic fashion.

After a heartbreaking match for Na’Vi, who lost after coming back from a huge deficit, however, an incredible upset win for Team Unique. Looking to push towards a sweeping upset, Unique picked Alexey “Zitraks” Ischenko Templar Assassin. If that hero could pop off in the second game, it would spell disaster for Na’Vi.

But the storied CIS team had different ideas. Putting Idan “MagicaL” Vardania Medusa, Na’Vi went for a hard scaling super carry-style game. Pressuring with their better early game and building space for their carries to farm, Na’Vi really took control of the second game and didn’t let Unique have anything. Their opponents attempted to try and sneak a Baron, only for it to be spied by a courier, and for Na’Vi to kill them.

Ultimately, this was the downfall for Unique, as Medusa scaled out of control, and as TA lost her lane, so couldn’t affect the game. For game three it was back to the drawing board for Team Unique. But nothing they tried worked. Another Medusa pick for Na’Vi, another bullying in lane, and quick loss for Team Unique. This was an absolute stomp by Na’Vi, a complete one-sided domination that was over in just 16 minutes with a 21-1 scoreline.

This was a great day of games, with some far longer matchups than we’ve previously seen. It’s a promising sight, as with so many games ahead of these teams, there was a tendency to tap out if a game or a series wasn’t going your way. Now it looks like squads are more focused on fighting things out, and grabbing those crucial points. ESL One Los Angeles 2020 continues on a series of Dota 2 channels.