OG Dota Returns in Opening Matches of ESL One 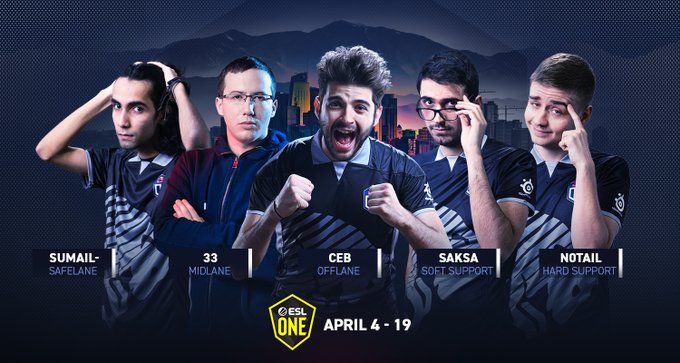 Even with stand-ins and high ping helping their cause, there wasn't anything Nigma could do to stop OG-style Dota from sweeping them. (Photo courtesy OG)

The European and CIS portion of ESL One Los Angeles started early Saturday with a pair of top-quality games. Kicking off proceedings were Gambit Esports and Viking.gg in a one-sided stomp by the latter. But the most important series today was Team Nigma versus OG – a rematch from The International 2019. It was a set of games everyone was eager to see. While some would have expected a tightly contested series that went all the way, instead, we were reminded of just how dominant OG can be when they’re playing well.

We're taking the series against @TeamNigma with a convincing 2-0.

Before the massive clash between Nigma and OG, though, our opening match of the Europe/CIS tournament saw Gambit take on Vikin.gg in an inter-regional battle for supremacy. On paper, both of these teams were relatively evenly matched, but it’s been some time since either have been seen at a major event

For Vikin.gg, it seems that time away from international and DPC level Dota has been productive. They’ve spent the past couple of months grinding out minor tournaments, winning the GGBET Championship 2, the Hot Price League twice in a row, and Winter Madness. These victories have clearly had an effect on the team, as they headed into this series with a lot of confidence.

That confidence manifested in a quick game one victory for the Romanian team. With mid-laner Miroslav “BOOM” Bičan on Monkey King, and their primary carry Indji “Shad” Lub on Anti-Mage, the squad quickly rolled over Gambit. After winning the mid lane with pure outplays, BOOM roamed across the map, securing kills for his team. Meanwhile, the Anti-Mage was simply a pushing machine, taking structures at light-speed. Gambit made a brief push to attempt on the way to a comfortable victory for Vikin.gg

If Gambit hoped to make a comeback, they’d have to play flawlessly in the laning phase, and for game two, they initially managed to do this. But the safe laning and lack of aggression had already spelled their doom. A fed Juggernaut on the side of Vikin.gg would Omnislash his way to a 2-0 victory, having shown that this team has learned a lot from its minor-league success.

Gambit is just not the team we expect them to be. Far from a CIS force that should be standing tall with the likes of Virtus.pro and Natus Vincere, this Russian squad is barely able to put up a fight against tier-two European opponents. Luckily, after that short and sweet opener, it was time for the main event.

Clash of the Titans

The second series of the day was probably the most incredibly hyped-up matchup of this tournament. It was the first chance to see these two stacks, of Nigma and OG, measure up against each other since TI9. It’s crazy to think it’s been so long since these teams have clashed, with the Nigma lineup retaining its same roster facing off against a partial iteration of the OG lineup.

Both teams were playing with some awkward pings, with members of both lineups across the globe. Notably, Syed Sumail “SumaiL” Hassan was competing with North American ping. But even with these handicaps, both sides put on an incredible performance.

Nigma started things out with an unorthodox Bounty Hunter pick, something team captain Kuro “KuroKy” Salehi Takhasomi had debuted previously at the WeSave! Charity Play event. Capitalizing on their early game power and stealth abilities, Nigma ganged up on Sumail’s mid Ember Spirit, making things difficult for the hero to even farm. It appeared as if the raw pushing-power of Nigma’s lineup was going to be too much for OG.

This would be the nail in the coffin for Team Nigma, who’d tap out a few minutes later.

Game two saw OG try something unorthodox, putting stand-in Neta “33” Shapira on one of his comfort picks, Chen, which had initially looked like a definitely support hero for N0tail. After a similar start to last game, which saw more early aggression from Nigma, the Chen exploded onto the scene with some incredible zoo pressure, as the waves of creeps under 33’s control pushed down lanes with ease.

This was a more muted but still dominant performance from OG in the second match of the day. They slightly tempered their aggression, but still had plenty of tricks up their sleeve. Sébastien “Ceb” Debs, in particular, was eager to show off the OG-style Dota that had won this team two TIs.

This was not the hyper-competitive series we were expecting. Instead, it was a reminder that OG is still an incredibly dominant organization, and the likes of Nigma, Team Secret, and the rest of the teams in Europe and CIS should watch their backs. ESL One Los Angeles Online continues on ESL’s official Dota 2 Twitch channel.