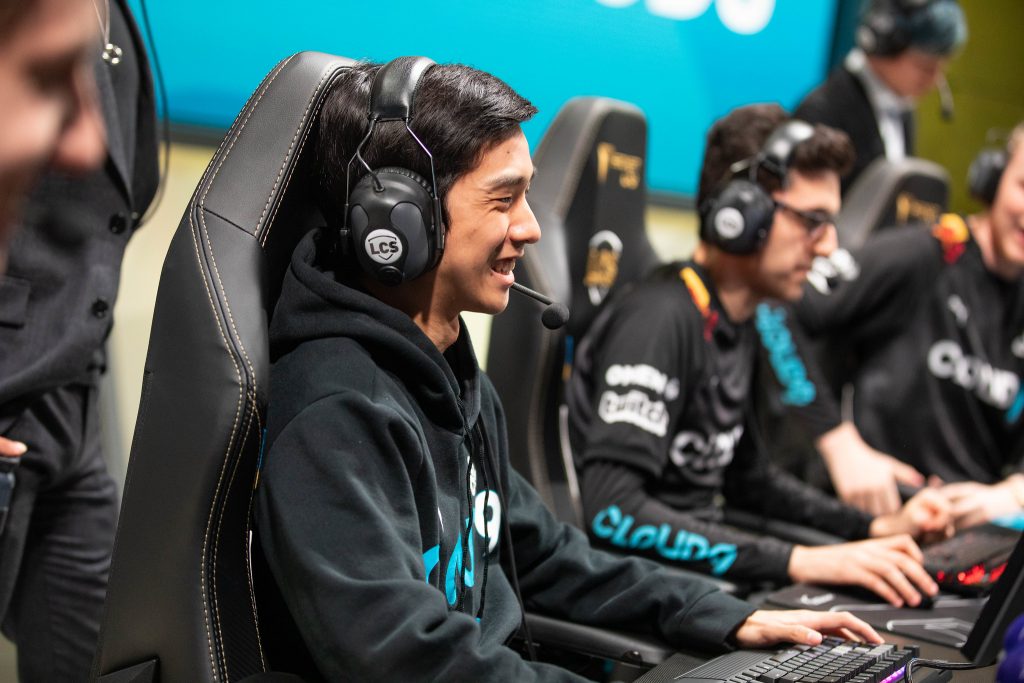 Cloud9 will have to go through TSM to earn a berth to the World Championship. (Photo courtesy Tina Jo | Riot Games)

The North American League of Legends Championship Series (LCS) Summer playoffs are upon us. Team Liquid and FlyQuest earned the first two World Championship berths in North America in convincing fashion. Meanwhile, TSM and Cloud9 advanced from their elimination matches to set up an epic match for the final Worlds berth. We take a look at where things stand in the LCS by looking at the top storylines so far in North America.

Two of the most popular teams in the league found themselves in elimination games earlier than they expected in the playoffs. Cloud9, long considered a lock to be one of NA’s representatives at the World Championship, lost to FlyQuest 3-1 in round three to put themselves in the lower bracket. While TSM were never considered a lock, their talent has always been evident. So, it was shocking to see them fall to the Golden Guardians 3-0 in round one. They cruised by Dignitas 3-0 in their first lower bracket game, but they’d have to win a rematch with the Golden Guardians to continue their season.

Cloud9 started the elimination matches with a crisp 3-0 over Evil Geniuses. Playing against their former teammates in Dennis “Svenskeren” Johnsen and Tristan “Zeyzal” Stidam, C9 proved once and for all that they won the breakup. After a very close 26 kills to 20 win in 46 minutes, Cloud9 handled the next two games with ease. C9 doubled EG up in kills (18 to 9 and 30 to 15), winning both games in 31 minutes. Jesper “Zven” Svenningsen got the better of Bae “Bang” Jun-sik, going a combined 23/7/30 across the three games to earn series MVP.

TSM, on the other hand, couldn’t have had a tougher series. Critical late game mistakes put them in an 0-2 hole, reminiscent of their 0-3 loss to the Golden Guardians in round one. Victor “FBI” Huang and Choi “huhi” Jae-hyun were smashing in Yiliang “Doublelift” Peng and Vincent “Biofrost” Wang, who surprisingly subbed in for Erik “Treatz” Wessén. TSM were on the brink of another failed season, despite doing their best to upgrade their roster around Søren “Bjergsen” Bjerg.

But, just when it looked hopeless, TSM pulled the series back. Sergen “Broken Blade” Çelik and Bjergsen took over the second half of the series, picking up the slack for the struggling bot lane. Mingyi “Spica” Lu also did well to neutralize Can “Closer” Çelik, going up multiple levels on Closer when on the hard farming Nidalee. TSM cruised to 33 and 24 minute wins in games three and four, setting up a pivotal game five.

TSM had the early gold advantage, but GG countered by stacking up dragons. Things looked grim for TSM after GG secured Infernal Soul, but TSM’s team fight was better. They captured Elder Dragon, and despite getting Baron stolen, they knew they could still fight 5v5. A crucial mistake in a team fight by FBI at 35 minutes gave TSM the opening they were looking for, and they did not hesitate. TSM used that advantage to push through GG’s base, keeping their season alive for at least one more week.

Now C9 and TSM are set up for the biggest series of the year in the LCS. The winner between their round three match will be the third and final team from North America to qualify for the World Championship, while the loser will have their season end. Cloud9 have undoubtedly been the stronger team over the course of the season, but it only matters what happens in this best-of-five series. Just ask the Golden Guardians, who ended up going 5-3 against TSM in the playoffs.

No player is playing better than Bjergsen right now, especially considering how many bans are being thrown at him game after game. However, C9 have the better supporting cast around Yasin “Nisqy” Dinçer. That’s especially true of support, where Philippe “Vulcan” Laflamme is one of the best in the world. TSM, meanwhile, will have to decide whether to continue with Biofrost after an uneven series, or turn back to Treatz.

The big series will begin on at 1 p.m. PST on Saturday, August 29th.

Over the second half of the Summer Split, two teams stood out from the pack. Team Liquid went 12-1 in their final 13 games, locking up the number one seed with a strong bounce back 15-3 record. Their two mid-year moves, moving on from Doublelift in favor of Edward “Tactical” Ra and the hiring of head coach Joshua “Jatt” Leesman, paid off in a big way. Even if they didn’t look as dominant as they did in their past four title runs, their record was just as good.

The second team that stood out in the LCS was FlyQuest. After moving Jason “WildTurtle” Tran back into the starting lineup, FlyQuest closed the regular season 7-1 and on a six-game winning streak. In fact, the only two games FlyQuest lost with WildTurtle in the starting lineup in Summer were against Cloud9. With Tristan “PowerOfEvil” Schrage performing at an MVP level, the sea squad had a powerful argument as the second-best team heading into the playoffs.

Both of these second half standouts continued their performance in the playoffs, locking up the first two World Championship berths in North America. FlyQuest earned the first with a redemptive 3-1 victory over Cloud9, while Team Liquid handled the Golden Guardians 3-0 to clinch their spot.

FlyQuest may have lost to Cloud9 in the Spring Finals and both times in the Summer Split regular season, but they didn’t let that affect them in the playoffs. FlyQuest showed they meant business in game one, getting off to a dominant 18 kill to 4 start. Cloud9 bounced back to win game two, but that would be their only win in the series. FlyQuest won tough, late game battles against C9 in both games three and four, needing 45 and 37 minutes to prevail. Lucas “Santorin” Tao Kilmer Larsen was named the series MVP for taking Robert “Blaber” Huang out of his comfort zone.

Today was a good day pic.twitter.com/leP84A11WT

Team Liquid’s 3-0 sweep may look dominant on paper, but the Golden Guardians made them work for the win. GG were the better early game team in the series, but no team in the LCS is better than Team Liquid in the late game. Like the jungler preceding him, Mads “Broxah” Brock-Pederson was named player of the series after a 10/5/26 on three Lee Sin games.

With their Worlds berths secured, Team Liquid and FlyQuest will now fight in the Semifinals to try to improve their seeding. Considering the North American third seed will have to battle through the Play-In stage, there is plenty of value in moving up to the first or second seed, not to mention the LCS title. The loser will be sent to the lower bracket to play against the winner of the TSM and Cloud9 match.

END OF THE ROAD FOR GOLDEN GUARDIANS, EVIL GENIUSES

While TSM and Cloud9 will move on, their round two opponents will not. Evil Geniuses and the Golden Guardians have been eliminated from the playoffs, and with the removal of the NA Regional Finals, their seasons have come to an end.

While that’s impressive for a new team, Evil Geniuses did not spare any expense on their roster. Not only did they bring in Daniele “Jiizuke” di Mauro and Bang as imports, they acquired Heo “Huni” Seung-hoon after Spring and negotiated with Cloud9 for Colin “Kumo” Zhao, Dennis “Svenskeren” Johnsen, and Zeyzal. It is rumored that they missed out on DRX mid laner Jeong “Chovy” Ji-hoon as their top target, but that was still a sizable commitment to a fresh roster.

It will be interesting to see how they shape the roster for 2020. With Huni eligible to declare NA residency next year, EG would be able to play him, Jiizuke, and Bang at the same time. All three remain under contract through 2021. However, Bang tweeted about being homesick throughout the year and seemed to have been hit hard by the Coronavirus pandemic. It wouldn’t be shocking to see him seek a transfer back home. Only Kumo and Greyson “Goldenglue” Gilmer have contracts set to expire at the end of the season.

Absolutely heartbreaking loss vs @TSM in a 5 game series. The boys gave it their all but it just wasn't in the cards. That ends our #LCS 2020 Summer Playoffs run. pic.twitter.com/QfXLdeJNXn

The Golden Guardians ended 2020 on a better note than Evil Geniuses. Even if they went out in the same round, GG looked to be improving as the year went on, especially after acquiring Tanner “Damonte” Damonte. Can “Closer” Çelik proved he was a top tier jungler in the LCS, while Kevin “Hauntzer” Yarnell continued to be a rock in the top lane.

However, the biggest surprise and building block for GG has to be their bot lane. GG went from one of the worst bot lanes with Yuri “Keith” Jew to one of the best with FBI and huhi. They absolutely dominated TSM in this series, and aside from FBI’s game five blunder, they were the reason GG were in the series. Though huhi’s contract expires at the end of the year, GG should do what they can to re-sign him. He has resurrected his career as one of the best supports in the LCS.

The LCS playoffs will continue into round three with four teams left in the tournament. TSM and Cloud9 will fight for North America’s final World Championship berth to open the week, starting at 1 p.m. PST on Saturday, August 29th. Team Liquid and FlyQuest will follow the next day at the same time. The winner of that match will earn their spot in the LCS Finals.