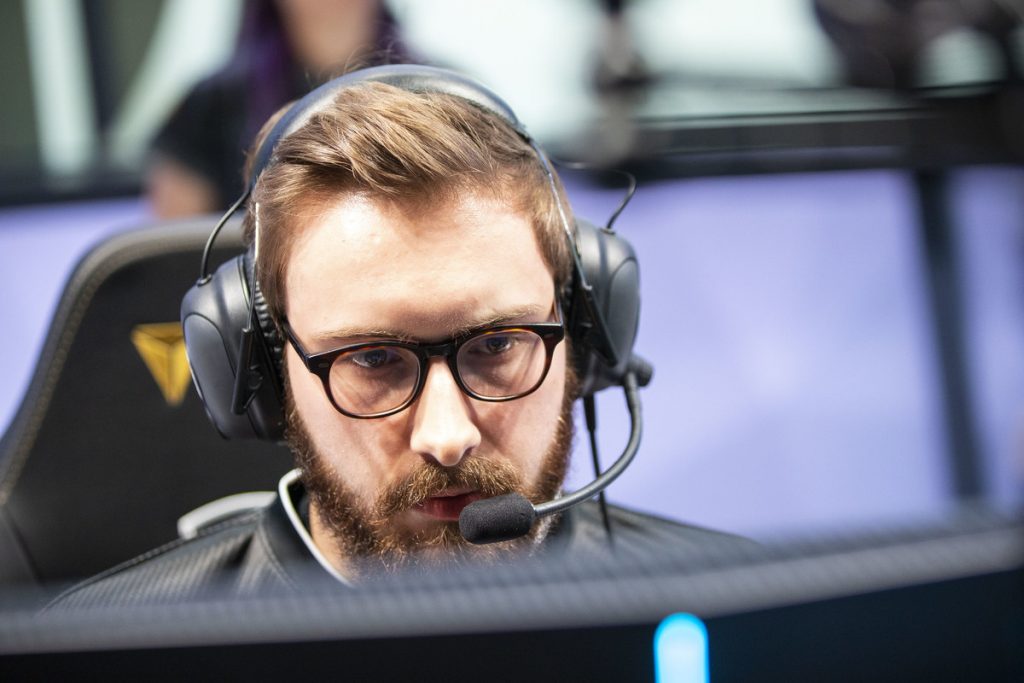 It wasn’t the start TSM were looking for, but they remain alive after a win over Dignitas (Photo courtesy Colin Young-Wolff - Riot Games)

The North American League of Legends Championship Series (LCS) Summer playoffs are upon us. A surprise 3-0 upset by Golden Guardians immediately sent TSM to the lower bracket, but the team rebounded with a sweep of their own. Meanwhile, Dignitas and 100 Thieves are looking to 2021 after being knocked out in their first matches. We take a look at where things stand in the LCS by looking at the top storylines so far in North America.

The opening weekend of the playoffs did not go as planned for TSM or Evil Geniuses. TSM were upset and swept 3-0 by Golden Guardians in round one, while Evil Geniuses fell in a five-game series to FlyQuest. But thanks to the double elimination format, both teams still had a shot in the lower bracket. TSM and EG took advantage for now, sweeping Dignitas and 100 Thieves to stay alive in the playoffs.

TSM opened the series against Dignitas by jumping on the back of star mid laner Søren “Bjergsen” Bjerg. Bjergsen went to his trusted Syndra pick against Orianna and controlled the game. Bjergsen went 9/2/2 with a game-high 26.3k damage dealt, leading TSM to a closer than expected 13 kill to 10 victory in game one.

The rest of TSM stepped in game two. Coming off his worst playoff series as a pro, ADC Yiliang “Doublelift” Peng had a standout 7/0/9 Ezreal performance in TSM’s poke comp. Jungler Mingyi “Spica” Lu played also played well, going 10/2/8 on Nidalee. TSM followed that win with their most dominant of the series, a 9 kill to 3 win in only 28 minutes to close the series. TSM were clearly the better side throughout, wasting little time with the eighth seed.

Evil Geniuses did the same thing in their three-game series against 100 Thieves. Dennis “Svenskeren” Johnsen had a banger of a game one, going 7/0/2 on Graves to lead the charge. Greyson “Goldenglue” Gilmer chipped in with a 5/0/6 Orianna performance in the 13 kill to 2 win.

100T stalled for 48 minutes in game two, but EG still came out on top. This time, Svenerskeren went 16/4/9 on Graves. Bae “Bang” Jun-sik’s Ashe went 6/2/18 and dealt a team-high 44.7k damage. Like the TSM series, game three was the least competitive of the match. EG jumped out to an early lead, kept growing it, and needed only 24 minutes to shut the door on 100T’s season. Heo “Huni” Seung-hoon’s Hecarim went 6/1/5 in the series clincher.

While it should do some good for TSM and Evil Geniuses morale to win in the playoffs, it’s hard to say the matches told us much about the teams. There were huge gaps in individual skill in both matches, a symptom of going eight teams deep in the playoffs. Both TSM and EG are fully committed to make a Worlds run, while 100T and Dignitas were just happy to clinch a playoff spot in the final weekend. TSM and EG will await the losers of the two upper bracket matches in round two.

SEASON OVER FOR DIGNITAS, 100 THIEVES

After scraping their way into the playoffs as the final two seeds, the odds were against Dignitas and 100 Thieves to make a deep playoff run. Not only did they combine for 12-24 regular season record, but they started in the lower portion of the playoff bracket. Unlike the other six teams in the LCS playoffs, Dignitas and 100T would be out if they lost their first match. Both did so, quickly and decisively. Neither series was particularly competitive. So, with their season now over they will have a unique off-season to re-tool for 2021.

Most of Dignitas’ LCS roster is signed through 2021. That includes Johnson “Johnsun” Nguyen, the player Dignitas should be building around. His support Zaqueri “Aphromoo” Black is also under contract through 2021, so it wouldn’t be a surprise to see Dignitas keep the duo together. The rest of the roster, though, is up for debate.

Jungler Joshua “Dardoch” Hartnett was one of the better performers after his move from TSM, but his contract expires in November. Considering Dignitas uses their academy team as a second LCS roster, they have nothing in the pipeline to replace him. That also applies to the solo laners. Only Omran “V1per” Shoura’s contract expires, but it would be a surprise if Dignitas renews his contract. V1per mightily struggled after losing his form with FlyQuest earlier in 2020.

Samson “Lourlo” Jackson would be the obvious replacement, but it doesn’t bode well that Dignitas never used him despite V1per’s struggles. Dignitas will likely look for a new top laner outside the organization. And while Dignitas played a bit better with Kim “Fenix” Jae-hun than Henrik “Froggen” Hansen this split, it’s hard to see either deserving another shot on the main roster. The problem, of course, is that Dignitas are not using their academy squad to develop young players. All additions must come from the outside.

Crushed that our #LCS playoffs run ends here – We were clearly second best on the day, GG WP to @EvilGeniuses.

Long offseason of hard decisions and conversations ahead, sorry to the @100Thieves fans that your trust couldn’t lead to more immediate success.

100 Thieves do not have that same problem. Not only do they have a solid batch of young players on their academy squad, but 100T Next is a third team that the organization has to develop young talent. That pipeline helped produce Philippe “Poome” Lavoie-Giguere, who despite an underwhelming playoff series, has looked like a promising player for 100T in his limited action.

All of 100T’s LCS starters remained signed through at least 2021, so changes will come only based on performance. Top laner Kim “Ssumday” Chan-ho is still great, but he needs help. 100T are not getting enough from the combination of mid laner Tommy “Ryoma” Le and ADC Cody “Cody Sun” Sun. Cody Sun has the better track record, as well as the benefit of being an NA resident, so the obvious move would be to look for a replacement for Ryoma. 100T gave him a full year with the main roster, but it was disheartening to see him destroyed by a native NA mid who was cut following Spring.

Milan “Tenacity” Oleksij and Shane “Kenvi” Kenneth Espinoza are 100T’s two big-time prospects, but Tenacity is currently blocked by Ssumday. Juan “Contractz” Arturo Garcia also performed admirably after his call-up, so it wouldn’t be surprising if the prospects both started 2021 in academy.

THE LCS DOES NOT NEED EIGHT PLAYOFF TEAM

For a long time, the LCS playoff format was simple. Six of the ten teams made the single elimination playoffs, with the top two spots earning a first-round bye. More than half the teams made the playoffs, while still leaving room for a dark horse to make a run to the title. The LCS then moved to a double elimination format for 2020 Spring. We saw the benefit to that when FlyQuest, after losing to Evil Geniuses in round one, beat Golden Guardians, TSM, and then EG in a rematch to make it all the way to the Finals. In the traditional format, they never would have had the chance.

However, the LCS did not stop their tinkering there. Perhaps due to the elimination of the Regional Finals, commonly known as the “gauntlet”, the LCS awarded eight playoff spots in the 2020 Summer Split. That is 80% of the league. While it does provide the opportunity for a miracle run like in the gauntlet, we also must consider that the teams that finish seventh and eighth in the Summer Split are rarely in contention for one of those spots.

While there was still drama at the bottom of the standings to end the season, it felt much less impactful considering the state of the teams. Instead of 100 Thieves and Evil Geniuses fighting it out for the sixth and final spot, a 7-9 EG team was already guaranteed playoffs heading into week nine, while 100T needed just one win to move on. Instead, we were treated to a three-way battle between Dignitas (5-13), Counter Logic Gaming (5-13), and Immortals (4-14).

Considering the LCS is obviously the weakest of the major regions, it makes little sense to provide it with more playoff spots. While obviously the leagues make their own decisions in regard to how they handle their playoffs, consider that the LEC (six) and LCK (five) give fewer spots in more competitive leagues, while the LPL (eight) have 16 total teams.

.@TSM win game three and complete the sweep against @dignitas to move onto the next round of the lower bracket of the 2020 #LCS Summer Playoffs! #TSMWIN #LCS

So, not only did it bring less excitement to the end of the regular season, it then brought less excitement to the playoffs. In a surprise to no one, 100 Thieves and Dignitas were both swept in non-competitive matches against the two teams that lost their opening round series. This was not a case of an eight seed losing to a one seed or a seven seed losing to a two seed. This was the seventh and eighth teams getting destroyed by what are now re-seeded as the fifth and sixth best teams in the LCS. That the matches were so one-sided begs the question: why were these matches needed at all?

In a more competitive region, it would be fine. Few people would be upset if Excel Esports and Misfits Gaming had a chance in Europe. The LCS can be applauded for experimenting with new formats, as the double elimination addition has given us a bigger sample size and adds more exciting matches. But this should be the last time eight teams make the playoffs, at least until the LCS proves it can support more quality teams.

The LCS playoffs will continue into round two with only four teams remaining in the upper bracket. Cloud9 will make their playoff debut to kick the weekend off, facing FlyQuest in a rematch of the Spring finals on Thursday, August 20th at 1 p.m. PST. That will be followed top seed Team Liquid taking on Golden Guardians the following day at the same time. Evil Geniuses and TSM will await the losers of the two upper bracket matches.