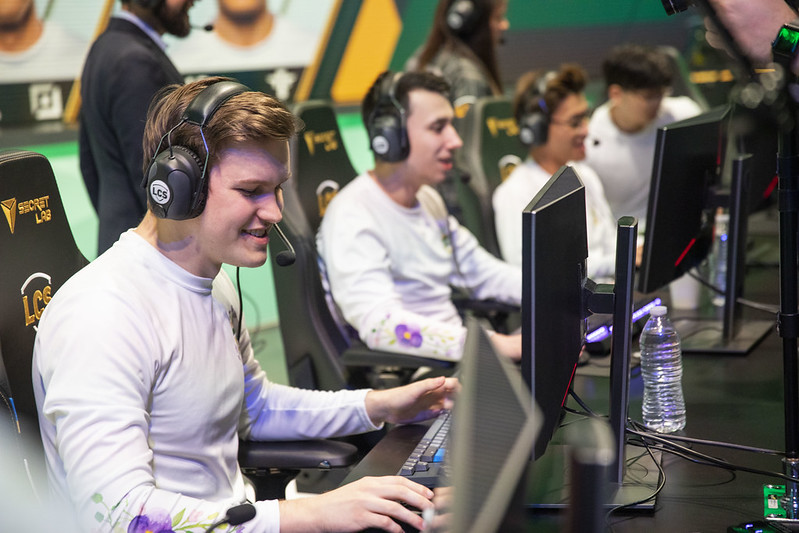 Just like in the previous LEC series, today’s LCS opponents previously met in Round 1 of the playoffs. Evil Geniuses came out on top of that match, forcing FlyQuest to go through both Golden Guardians and TSM to get another shot at EG.

FlyQuest made the most of it, taking down Evil Geniuses 3-1 to earn their first berth in an LCS finals and set up a showdown with Cloud9 in the finals. EG will settle for a strong third place finish in their return to the LCS.

FlyQuest started the series with a bold decision to not only let Kalista through the ban phase, but also picked Aphelios over Kalista with their first red side pick. That allowed Evil Geniuses to get Ornn and the Kalista/Taric combo in their first two rotations. However, FlyQuest were ready with counters. Trundle came out to weaken Ornn, while Blitzcrank paired so well with Trundle’s pillars. Tristan “PowerOfEvil” Schrage also got final counter pick, opting for Viktor into Daniele “Jiizuke” di Mauro’s Zilean.

FlyQuest got ahead early in game one. Lucas “Santorin” Tao Kilmer Larsen’s Trundle got to bot lane before Dennis “Svenskeren” Johnsen’s Graves, allowing Lee “IgNar” Dong-geun’s Blitzcrank to chase down Tristan “Zeyzal” Stidam’s Taric. EG then channeled two teleports bot, but FlyQuest immediately turned on Jiizuke and killed him before he used Zilean ult. That allowed FlyQuest to also pick up Svenskeren and complete a quick three for zero win.

FlyQuest used that early fight win to build a strong 6.6k gold lead by 20 minutes, putting themselves in a dominant position. EG attempted to fight FlyQuest off the Mountain Soul at 23 minutes, but PowerOfEvil survived EG’s initial pick attempt and FLY won the ensuing fight.

That Mountain Soul was the final nail in the coffin for Evil Geniuses. Without the ability to burst FLY for a pick, they had no way back into the game. A team fight win mid turned into Baron for FLY, giving them the push power they needed to end. FlyQuest took game one 21 kills to 9 in 29 minutes.

FlyQuest opted to ban out Aphelios in game two, prompting EG to pivot from first pick Ornn to first pick Kalista. That left Ornn for Colin “Solo” Earnest, while still giving Jason “WildTurtle” Tran and IgNar a strong bot duo in Xayah and Rakan. Svenskeren had a good counter pick to Ornn in Kindred, but EG once again had a Kalista and Taric paired with champions like Zoe who don’t want to dive into the enemy team.

.@FlyQuest repel the mid lane dive after @IgNarLoL goes down and collapse for four kills! #LCS

Evil Geniuses tried to execute a pick on PowerOfEvil before infernal drake spawned at 16 minutes. But with Solo already roaming down from top, Bae “Bang” Jun-sik’s Kalista was caught between FLY’s turrets and instantly popped. Now with a clear numbers advantage, FLY pushed forward and picked up three more kills. That, with the ensuing infernal drake, catapulted them to a huge lead.

Like in game one, EG felt forced to fight for a Dragon Soul despite being down several thousand gold. After rebuffing EG’s initial engage, Solo used his flash knock up to re-engage a winning fight for FLY. FLY used their two kills to secure Infernal Soul and quickly transitioned that into a Baron.

FlyQuest used their Baron empowered minions to slowly whittle down EG’s base. Without a strong engage, EG just had to sit back and watch it happen. FLY put EG on match point with a 15 kill to 3 win in 34 minutes. Solo (1/0/10) and PowerOfEvil (5/0/6) both finished deathless.

Evil Geniuses had enough of IgNar’s playmaking by game three, dedicating bans to both Rakan and Blitzcrank to slow him down. FlyQuest let Aphelios through again, but this time opted to take both Ornn and Kalista with their first picks on red side. EG gave Colin “Kumo” Zhao a lane bully in Renekton for the first time this series, hoping he could neutralize Solo’s Ornn. PowerOfEvil chose to split his mid lane matchup with Jiizuke’s Azir by picking Corki, despite counter picks like Vel’Koz being available.

.@EvilGeniuses find the start they were looking for as @JiizukeLoL grabs an early double kill! #LCS

That didn’t work out very well for PowerOfEvil as Jiizuke picked up a solo kill on him only six minutes into the game. EG was bullying Santorin out of his jungle, but Jiizuke had the push on POE and dove him under his own turret. Now with no obstacle in his way, Jiizuke joined the rest of his team and picked up another kill on IgNar’s Pyke.

FlyQuest started up Rift Herald at 11 minutes, but EG were ready. Bang stole away the buff after Santorin ulted away, but more importantly EG won the resulting fight. Svenskeren had a good re-engage on WildTurtle’s Kalista, taking him and Santorin out to secure another three kills for EG.

By getting Jiizuke so ahead on Azir early, EG were untouchable in the mid game. Their late game scaling champion quickly got to his first item, while being surrounded in mid game spiking champions like Renekton and Gragas. EG took FLY’s mid inhibitor by 19 minutes and had already built a 9k+ gold lead. They would need only 22 minutes to pick up their first win of the series. Jiizuke finished 7/0/6 in EG’s 15 kill to 4 victory.

EG continued to ban out IgNar’s top support picks, but he had one more surprise in store for them. With Evil Geniuses going heavy AoE in Miss Fortune, Ornn, and Gragas with their first three picks, IgNar picked Braum as a perfect response to blocking their ultimates. Coupled with Trundle and Corki, FlyQuest’s squad would welcome an engage from EG. Zeyzal tried to respond with a last pick Yuumi to poke IgNar down in lane.

The problem with that for EG is that they opened themselves up to gank opportunities. WildTurtle got the root on Bang’s Miss Fortune, Ignar followed up with a slow, and Santorin’s pillar sealed Bang’s fate for First Blood. The problem for EG now was that you can’t bully a lane from behind.

BUD LIGHT ACE and we've got the Infernal Soul in Game 4! pic.twitter.com/72a885uRSC

The bot lane priority EG drafted for was now non-existent, meaning FLY could stack dragons without contest. In an all too familiar scenario, EG found themselves down 5.5k gold but having to contest a Dragon Soul at only 22 minutes into the game. Unfortunately for EG, FLY rushed it down before Svenskeren could even get into the pit and the resulting team fight was for nothing. FLY walked away with the Infernal Soul and grew their gold lead to 6k.

EG stalled out well with Jiizuke’s wave clear, but they still could not stop FLY from collecting everything on the map. With Elder Dragon and Baron buff in their pockets, FLY finally made their final push at 38 minutes. FLY knocked down all three inhibitors and allowed the minions to crash into EG’s base. FLY then focused on destroying structures and knocked down EG’s Nexus without a single player dying on either side. Their 17 kill to 8 win in 39 minutes secured their spot in the finals.

This is a huge moment for us 💚

It all comes down to this, our first Finals! See you tomorrow @Cloud9 🌹 pic.twitter.com/7y3CXjW3RX

FlyQuest now move on to face the prohibitive favorites Cloud9 in the finals. That series for the North American championship will begin at 1 p.m. PST on Sunday, April 19th.