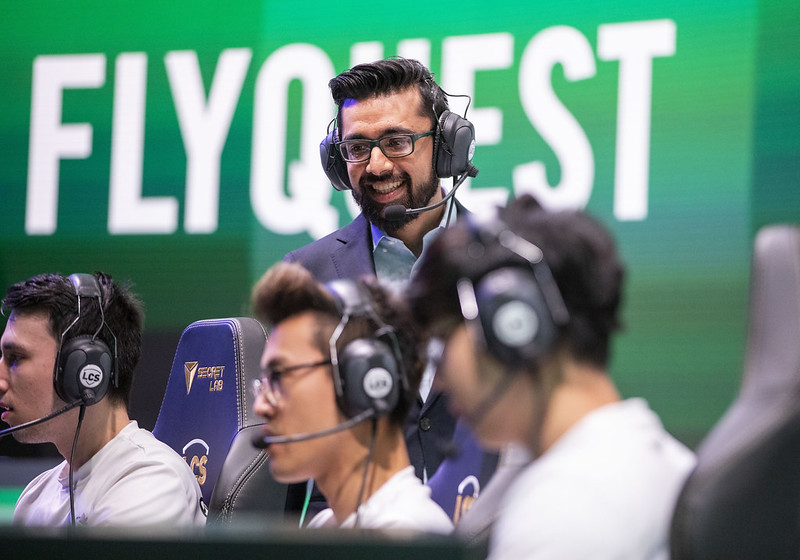 FlyQuest will get another shot at Evil Geniuses after a 3-2 win over TSM. (Photo courtesy Colin Young-Wolff - Riot Games)

The final series of Round 2 of the 2020 League of Legends Championship Series (LCS) Spring Split took place between FlyQuest and TSM. FlyQuest swept Golden Guardians 3-0 in Round 1 to advance, while TSM held on to beat 100 Thieves 3-2.

FlyQuest will move on to face Evil Geniuses in the semifinals after a long 3-2 victory over TSM. The winner of that match will get to face Cloud9 in the playoff finals. Meanwhile, TSM again fell short of expectations to finish fourth.

FlyQuest showed they have a different bot lane priority than most teams in game one by first picking Rakan. That forced TSM to either pick Xayah to deny the combo or let it through for Jason “WildTurtle” Tran. Kasper “Kobbe” Kobberup decided to go with the more popular Aphelios pick, giving FlyQuest Xayah as they wanted. Sergen “Broken Blade” Çelik blind picked Aatrox in their first rotation, allowing Collin “Solo” Earnest to counter pick with Gangplank. That gave FlyQuest a rare lane and scaling advantage in top lane. Søren “Bjergsen” Bjerg rounded out the draft by picking Viktor into Tristan “PowerOfEvil” Schrage’s Orianna.

After a really back-and-forth early and mid game, the teams were basically dead even at 40 minutes. TSM forced Baron and shredded it with Kobbe’s five item Aphelios, but FlyQuest traded the ensuing fight three kills apiece. TSM then secured the Infernal Soul a minute later to greatly amplify their damage.

TSM used Baron to push down FlyQuest’s top inhibitor, but FlyQuest still fought back. A pick onto Bjergsen mid allowed them to take TSM’s mid inhibitor and one Nexus turret before they were repelled by TSM.

A team fight breaks out as @FlyQuest push for the Nexus, but @Bjergsen respawns and teleports into the base to end the game for @TSM! #LCS #TSMWIN

As the four-man squad of TSM fought FlyQuest off their Nexus, Bjergsen respawned and instantly teleported into FlyQuest’s base. With a full six item build and Lich Bane, Bjergsen quickly knocked down both Nexus turrets and FlyQuest’s base to backdoor the win for TSM in game one. Kills were tied at 23 apiece as TSM destroyed the Nexus at 47 minutes. Bjergsen finished 9/4/6.

When 100 Thieves lost to TSM in game one of their series, they decided that their composition wasn’t the issue and decided to run it back. FlyQuest clearly had similar thoughts about their game one draft. They, too, picked the identical composition to game one and TSM matched them once again. It was an interesting call by TSM because, if not for Bjergsen’s heroics, they looked like the worse side on multiple occasions in game one.

TSM were in control of the early game this time in game two. Joshua “Dardoch” Hartnett’s Jarvan IV pulled off a level two gank mid to give Bjergsen’s Viktor First Blood. The two then transitioned their priority to dive top lane at five minutes to give Broken Blade’s Aatrox a kill on Solo. TSM also picked up the first Cloud drake and had a 2k gold lead at 10 minutes via CS and turret plate leads.

With another chance at executing their composition, FlyQuest played more slowly in game two. They looked for quick picks on TSM around objectives in the mid game instead of opting into the big brawls that benefitted TSM. FlyQuest repelled TSM’s initial Baron attempt and secured the next three Ocean drakes to set up Ocean Soul point.

Another runback in the 2020 #LCS Spring Playoffs, another victory! @FlyQuest make the adjustments needed and even up the series 1-1! #LCS #FLYWIN

It turns out that FlyQuest didn’t even need to get to that point. With a 5v2 advantage, FlyQuest picked up Baron at 31 minutes and used it to push into TSM’s base. FlyQuest took all three inhibitors without a TSM engage because FlyQuest used their poke and zone control to dissuade Dardoch from engaging. Three waves of super minions were spawning before TSM finally pulled the trigger. FlyQuest took the Nexus with only one TSM casualty to even the series at one game apiece. WildTurtle’s Xayah (4/0/1), Lucas “Santorin” Tao Kilmer Larsen’s Trundle (0/0/7), and Lee “IgNar” Dong-geun’s Rakan (0/0/6) all finished deathless.

TSM made the first change in game three’s draft, opting to pick up Nautilus instead of Aatrox in their first rotation. Solo then snapped him up for FlyQuest, guaranteeing we’d get different comps in game three. Bjergsen blind picked his famous Zilean in the first rotation to offer more safety for Kobbe’s Aphelios. Instead of picking a tank to round out their composition, Broken Blade went for the lane dominance of Irelia into Solo’s Aatrox.

An extended skirmish in the bot lane nets @TSMBrokenBlade a triple kill and @FlyQuest three kills in an even trade! #LCS

That pick looked pretty good for TSM when he picked up an early triple kill bot. A 4v4 broke out and started in TSM’s favor, but PowerOfEvil’s Azir was able to recall and teleport bot to help FlyQuest even the kill trade. Still, the three kills for three trade benefitted TSM because of the three kills that landed on Broken Blade.

The problem for TSM is that Irelia can never dive into FlyQuest’s team. With Santorin’s Trundle Pillar and Azir’s Emperor’s Divide, they can stop Broken Blade from ever having back line access to Xayah or Azir. Meanwhile, Kobbe’s Aphelios has a hard time walking through Azir’s Sand Soldiers without getting deleted. Even with Bjergsen’s Zilean ult, FlyQuest controls the fight zones.

That became increasingly clear in the late game team fights. Dardoch attempted to engage at 39 minutes, but Trundle’s Pillar delayed him while FlyQuest took Broken Blade to half health. By the time he went, Dardoch was half a screen away from Kobbe. FlyQuest got back to Baron quickly and shredded it down at 40 minutes, picking up kills on Bjergsen and Broken Blade to take control of the game.

FlyQuest marched into TSM’s base to put the finishing touches on game four. Armed with Baron and Infernal Soul, FlyQuest poked Dardoch down before he could even engage. Now up 5v4, FlyQuest could dive through TSM’s turrets to take down all three inhibitors and, eventually, the Nexus. They put TSM on match point with a 20 kill to 10 win in 44 minutes. PowerOfEvil finished 9/2/4 on Azir.

TSM went all in on their early game in game four. After taking away FlyQuest’s preferred Xayah and Rakan, TSM picked Renekton and Elise for one of the most potent top lane dive combos in the game. Bjergsen rounded out the composition with another diver in Sylas. FlyQuest also had early game power with Aatrox, Pantheon, and Leblanc, so it would come down to who executed the early game better.

It became very clear early that TSM would run away with this one. Dardoch’s Elise got the ball rolling with a kill on Solo for First Blood at five minutes. Getting behind early spelled disaster for Solo, as Dardoch just repeat ganked at seven minutes for another kill. Broken Blade got stuck in his minion wave to tank an extra two turret shots, baiting FlyQuest into chasing him down. Santorin’s Pantheon eventually got him, but he and PowerOfEvil’s Leblanc died for it to put TSM up four kills to one early.

TSM just kept bullying Solo and diving FlyQuest to accelerate their lead. Bjergsen’s Sylas was a primary beneficiary, especially as he got great mobility in these skirmishes from Leblanc’s ult. TSM built a massive 5k gold lead by 15 minutes.

Already so far ahead, a final team fight in FlyQuest’s base at 24 minutes sealed the win for TSM. They finished game four up 12k gold and 18 kills to 6 in the most lopsided victory of the series. Bjergsen finished 8/0/1, while FlyQuest’s top side of Solo, Santorin, and PowerOfEvil were victimized for a combined 2/13/4 score.

After having so much success with an early game composition in game four, TSM reverted back to their original priority in game five. They picked Aatrox, Aphelios, and Nautilus in their first rotation. Those champions are not great into FlyQuest’s first pick Sett, who welcomes any kind of engage into him. Add in PowerOfEvil’s zone control with Azir, and TSM composition played right into FlyQuest’s hands. That doesn’t even mention how FlyQuest had early lane priority in every lane and jungle matchup.

That priority netted FlyQuest First Blood at 3:30. For reasons unknown, TSM decided to group up and contest Santorin’s bot lane scuttle crab. FlyQuest’s bot lane matched TSM’s and Azir arrived well before Ekko to make it a 4v3 for FlyQuest. They focused down Dardoch’s Sejuani to put the better scaling team ahead early.

TSM desperately tried to get back on track with a bot lane dive at 8 minutes, but it only made things worse. TSM barely killed WildTurtle’s Varus in a 4v3 before Azir arrived to clean up the rest. PowerOfEvil picked up a double kill, FlyQuest won the exchange three kills to two, and FlyQuest took an early 2k gold lead.

TSM evened the kill score with a pair of picks, but they came at the expense of their turrets. FlyQuest already destroyed six of TSM’s turrets by 20 minutes, including TSM’s bot inhibitor turret. Even with the kills tied at five apiece, FlyQuest jumped out to a 6k gold lead by 22 minutes.

.@FlyQuest defeat @TSM in game five to win the series and will face off against @EvilGeniuses for a spot in the 2020 #LCS Spring Finals! #LCS #FLYWIN pic.twitter.com/fScAnB4Jg3

A three for zero fight for FlyQuest at the next Cloud drake gave FlyQuest the power to take Baron immediately afterwards. A pick on Vincent “Biofrost” Wang’s Nautilus then allowed FlyQuest to push down TSM’s top inhibitor and go for the Nexus. TSM watched helplessly as PowerOfEvil and WildTurtle shredded their base to take game five and the series. FlyQuest won game five 10 kills to 6 in 27 minutes.

FlyQuest will get a chance at revenge in their rematch with Evil Geniuses in the semifinals. The two teams will meet on Saturday, April 18th at 1 p.m. PST for the right to face Cloud9 in the finals.