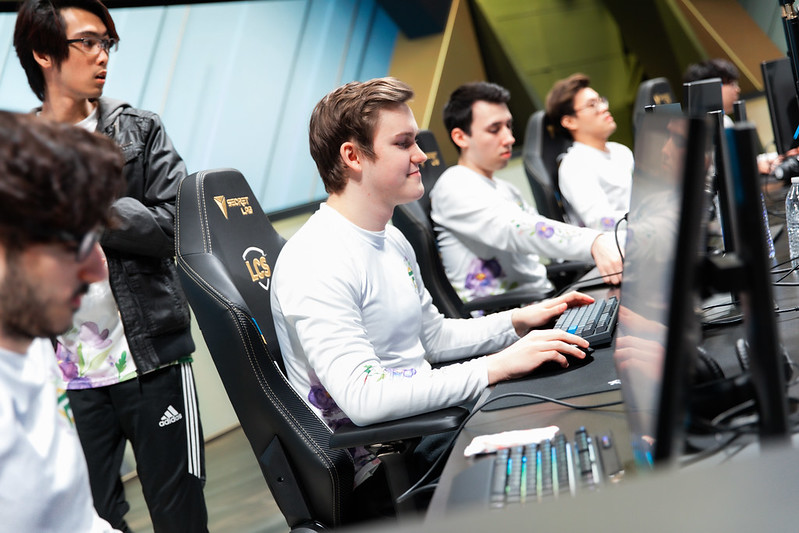 FlyQuest will get a chance to plant more trees after a 3-0 sweep of Golden Guardians. (Photo courtesy Oshin Tudayan - Riot Games)

The 2020 LCS Spring Split playoffs kicked off the loser’s bracket with the first elimination match of the tournament. FlyQuest were sent down to face Golden Guardians after their 3-1 loss to Evil Geniuses on the opening day of the playoffs.

FlyQuest proved they still belong in the tournament with a strong 3-0 sweep over Golden Guardians. They will move on to Round 2 where they will face the winner between 100 Thieves and TSM. After winning the tiebreaker to become the last team to make the playoffs, GGS have become the first team to officially be eliminated.

Golden Guardians looked like they got the better end of the draft in game one. Their Kalista and Taric bot lane not only scaled better than FlyQuest’s Xayah and Rakan, but their level one power allowed Can “Closer” Çelik’s Jarvan IV to bully Lucas “Santorin” Tao Kilmer Larsen’s Rek’Sai off his red buff level one. Add in that Kevin “Hauntzer” Yarnell’s Ornn goes even in lane with Collin “Solo” Earnest’s Aatrox and out-scales him later, and GGS just needed to get out of the early game in good position.

Fortunately for FlyQuest, they took the first three dragons of the game to set themselves up a Mountain Soul win condition. Santorin out-smited Closer in the middle of a team fight around the third spawn to keep that hope alive for FlyQuest.

The two teams converged to fight for the fourth dragon spawn at 25 minutes. Solo teleport flanked behind GGS to wrangle them in, but second team All-Pro Lee “IgNar” Dong-geun played the most important role in the fight. His Rakan charmed Victor “FBI” Huang’s Kalista, preventing him from using Fate’s Call on Choi “Huhi” Jae-hyun’s Taric. Huhi was popped before his Cosmic Radiance could activate, giving FlyQuest a 5v4 fight to secure their Mountain Soul.

With Mountain Soul in hand, FlyQuest were able to take Elder Dragon — off another nice steal by Santorin — transition that to Baron, and then push down most of Golden Guardians’ base. It took another Elder Dragon and Baron spawn for them to close it out, but FlyQuest eventually did in 42 minutes. They led 15 kills to nine, with Tristan “PowerOfEvil” Schrage contributing a 10/1/4 score on Leblanc.

This time, FlyQuest had the more cohesive draft in game two. Their Aatrox, Pantheon, and Kassadin all want to dive Golden Guardians’ team together, while Kalista can kite with Blitzcrank in the back line. Golden Guardians looked like they had a poke composition set up, but then drafted Maokai for hard engage and team fight with their final pick. FBI also built on-hit items with Varus instead of Lethality, not using the poke synergy between him and Greyson “Goldenglue” Gilmer’s Zoe.

With the strong draft advantage this time, FlyQuest won game two with ease. Goldenglue and Closer were not able to punish PowerOfEvil’s last pick Kassadin mid, in part because Jason “WildTurtle” Tran’s Kalista and IgNar’s Blitzcrank had such a powerful advantage bot lane. IgNar showed why he is one of the most feared Blitzcranks in the world, creating picks to put FlyQuest up five kills to two at 15 minutes.

Golden Guardians went all-in to take an Ocean Drake at 26 minutes, but FlyQuest punished immediately afterwards. All five members were clumped in dragon pit for Solo’s Aatrox to deal maximum damage, and FlyQuest’s dive composition had no problem following up. FLY picked up three kills, took an uncontested Baron, and marched to the win through bot lane. They won 15 kills to three in 29 minutes. Both PowerOfEvil (5/0/7) and WildTurtle (4/0/8) went deathless for FlyQuest.

Golden Guardian’s focused on taking away Solo’s Aatrox early in game three, perhaps wanting Hauntzer on a more carry-oriented champion after games of Ornn and Maokai. But, without Hauntzer on a tank, GGS lacked engage outside of a Varus Chain of Corruption. On the other side, an early rotation Gangplank served two purposes for FlyQuest. First, it beats Aatrox in lane and out-scales him later. Second, his heavy physical damage paired with Pantheon allowed FlyQuest to flex Syndra to bot lane for WildTurtle.

GGS got on the board early with a level one invade on Santorin’s red buff. WildTurtle flashed away too late, allowing FBI to pick up First Blood before minions spawned. A follow up dive from Closer at three minutes gave WildTurtle his second death in as many minutes.

GGS took the first two dragons of the game with their early bot pressure, but Closer’s bad day continued at the third spawn. WildTurtle’s Syndra stole Ocean Drake for FlyQuest to prevent GGS from Ocean Soul Point. PowerOfEvil’s Leblanc then picked up a double kill to give FlyQuest a 3k gold lead.

GGS found two picks on FlyQuest to pick up their third drake, but the missed opportunity on WildTurtle’s steal would haunt them. With GGS on Soul Point instead of already having Ocean Soul, FlyQuest wiped them in a team fight at 32 minutes. With an 11k gold lead, FlyQuest easily transitioned to Baron to begin the close out.

Congratulations to @PowerOfEvilLoL on winning Player of the Series for the lower bracket 2020 #LCS Spring Playoffs series between @FlyQuest and @GoldenGuardians! #LCS #FLYWIN pic.twitter.com/R4FVpzF6xz

After destroying much of GGS’ base, FlyQuest returned to claim their Ocean Soul. GGS felt they needed to fight it, but were once again cleaned out easily. With those four kills, FlyQuest ignored the dragon and teleported into GGS’ base to finish the Nexus. FlyQuest finished the clean sweep with a 17 kill to 7 win in 39 minutes. PowerOfEvil dominated for the third straight game (6/0/8) to earn series MVP.

The LCS playoffs continue with the second elimination match on day four. 100 Thieves will take on TSM on Wednesday, April 8th at 1 p.m. PST.