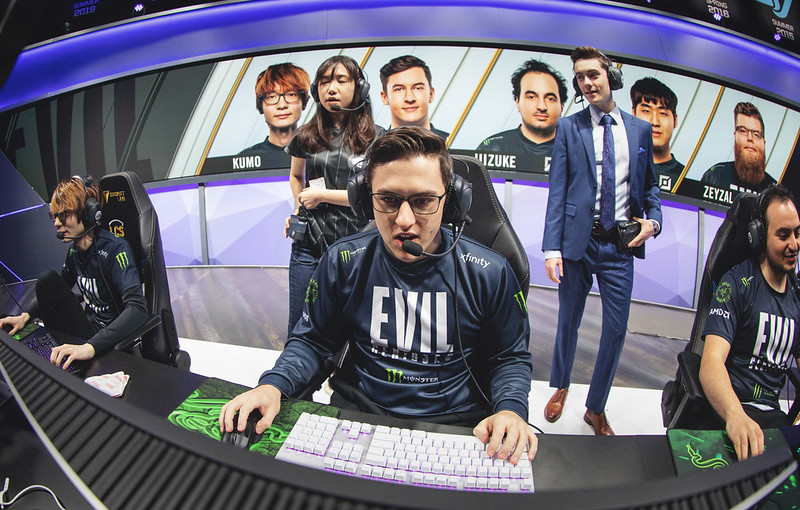 The 2020 LCS Spring Split playoffs kicked off day one with a matchup between Evil Geniuses and FlyQuest. The fourth seeded FlyQuest got matched with the second seeded Evil Geniuses because the top seed Cloud9 preferred their matchup versus 100 Thieves to FlyQuest.

That bit of opponent luck didn’t help FlyQuest, as Evil Geniuses took care of them in a 3-1 victory. Evil Geniuses advance to fight the winner of C9 and 100T in Round 2, while FlyQuest will play Golden Guardians in the Loser’s bracket.

FlyQuest later secured the second Rift Herald and used it to push down EG’s mid inner turret. That pressure advantage allowed FlyQuest to control top river, where FlyQuest subsequently picked off Jiizuke. With the 5v4 advantage, FlyQuest then started Baron to bait in EG for a fight.

EG took the fight, but it turned out to be FlyQuest who were baited. FLY took too much damage from Baron before the fight, allowing EG to win the 4v5 fight with ease. Tristan “Zeyzal” Stidam’s Taric ult negated FLY’s initial engage and EG picked up four kills for no casualties. EG then secured Baron uncontested, taking a 2k gold lead with the scaling advantage.

FlyQuest attempted a fight mid lane at 28 minutes, but Colin “Kumo” Zhao’s five-man Sett Facebreaker locked FLY down while Bae “Bang” Jun-sik’s Kalista could tear them apart. EG chased FLY all the way into their base, picking up four kills and using that 5v1 advantage to end the game. EG won 11 kills to 5 in 29 minutes of play in game one. Second team All-Pro selection Bang finished a perfect 3/0/6 in the opener.

The first big action of game two occurred at Rift Herald at nine minutes. EG started it off, but both teams collapsed as five. Santorin’s Jarvan IV was the first to fall in the fight, but FlyQuest quickly equalized by killing Zeyzal’s Nautilus. The Rift Herald got re-aggro’d halfway through the fight, helping Bang kill off V1per in the pit. But when Bang chased after the rest of FlyQuest, the Rift Herald actually dealt the killing blow to Bang. When it was all over, FlyQuest won the fight five kills to three and secured Rift Herald.

Despite that early win, FlyQuest were never able to build a significant lead. After a mid lane dive went wrong for them at 13 minutes, EG were up in gold despite still being down five kills to six. Considering the scaling advantage of Ornn and Aphelios over Sett and Xayah, that was problematic for FlyQuest.

The two teams converged to fight for the Ocean Drake spawning at 24 minutes. V1per kicked off the fight with The Showstopper, but FlyQuest couldn’t burst Bang. Bang got his Aphelios ult off and EG won the fight three kills to zero, allowing them the run of the map. EG sent three members to Baron, while Jiizuke and Kumo finished the Ocean Drake.

With the Baron in hand, EG were able to end the game on their next push. FlyQuest were so unable to fight that four of them were still alive as EG pushed all the way from top inhibitor turret to the Nexus. EG ended game two up 13 kills to 8 in 27 minutes.

With their season hanging in the balance, FlyQuest made a starting lineup swap for game three. After getting the majority of the starts in the final regular season games, Colin “Solo” Earnest stepped in for V1per. Top lane continued to be a focal point in the draft, as FLY first picked Sett for Solo on blue side. He would face off against Kumo’s Ornn.

That move paid off for FlyQuest early on. Solo and Santorin were duoing Rift Herald when Dennis “Svenskeren” Johnsen peeked his head in. Solo instantly used The Showstopper on Svenskeren, locking him down and picking up First Blood for FLY.

While FLY lost early leads in the first two games, that wasn’t the case in this one. They stacked up their elemental drakes, securing Mountain Soul at 34 minutes. Mountain Soul provided great value on Sett and Jarvan IV while also negating a lot of Jiizuke’s Ezreal poke.

A mid lane team fight at 38 minutes was the final of the game. EG couldn’t get through FLY’s team-wide shields and slowly lost through a battle of attrition. FlyQuest picked up all five EG members and pushed for the win. FLY led 18 kills to seven in the 40 minute game. Solo finished 4/2/10 in his playoff debut with FlyQuest.

Game four was dead even at 24 minutes. Only one kill and less than 100 gold separated the teams. Both teams were attempting to shove out mid lane as Mountain Drake was spawning when a fight broke out. Zeyzal’s Sett got a great flash Facebreaker engage on FLY to allow them to instantly burst down Tristan “PowerOfEvil” Schrage’s Corki. With him down, EG took two more kills and Baron without contest.

EG used that Baron to take both mid and bot inhibitors, pinning FlyQuest to their base. After taking mid inhibitor, EG feinted going to the dragon before heading back to the top lane. FlyQuest reacted quickly, repelling the EG push and giving them access to Mountain Drake and Soul Point.

EG took the next Baron at 32 minutes, but FlyQuest won the ensuing fight three kills to one. EG used Baron to again take bot inhibitor, but they were poked down enough that they had to base before Mountain Drake spawned. FlyQuest capitalized by getting into position earlier and burning it down quickly for Mountain Soul. EG traded it for taking FLY’s mid inhibitor.

EG lured FLY out of their base by starting Baron at 39 minutes. When Solo started to walk up, Jiizuke’s Taliyah and Svenskeren’s Pantheon ulted into FLY’s based to attempt to end the game. Solo and WildTurtle killed them just in time to save the Nexus, but the other three members of FlyQuest fell to Kumo, Bang, and Zeyzal. With their remaining three members, EG easily walked up and finished the Nexus to win the series. They took game four 18 kills to 15 in 39:30.

Day two of the LCS playoffs features top seed Cloud9 taking on third seeded 100 Thieves, where the winner will then face Evil Geniuses. The series will take place on Sunday, April 5th at 1 p.m. PST.