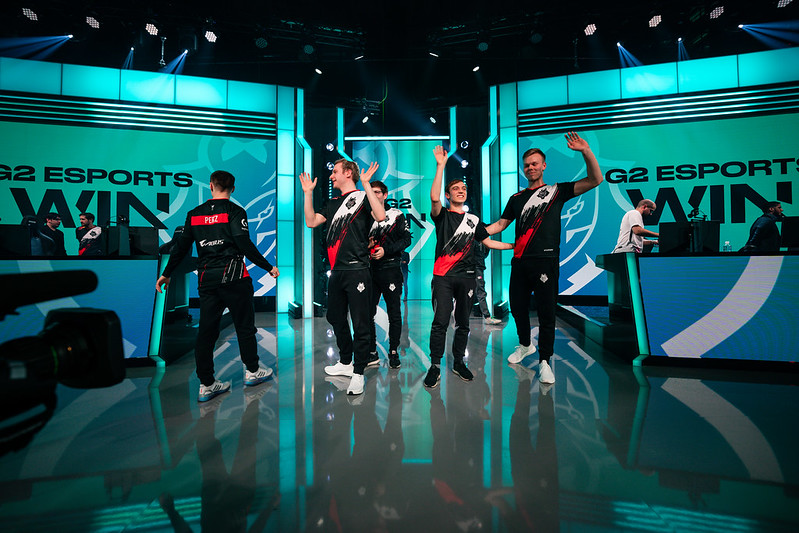 The first and only rematch between teams in the League of Legends European Championship (LEC) Spring Split playoffs took place between G2 Esports and MAD Lions Saturday. MAD upset G2 in the opening round before falling to Fnatic in the semifinals, setting up a rematch in the Loser’s finals.

G2 Esports got the better of MAD Lions this time in a 3-1 win that advances them to the finals. They will fight their top rival Fnatic for the Spring Split championship. Meanwhile, MAD Lions will be proud of their third place finish after replacing four players with rookies in the off-season.

Counter picks were the name of the game in game one. G2 Esports picked Yuumi as blue side first pick, leading into an Ezreal red side first pick for MAD Lions. G2 then matched Ezreal’s poke with Azir, allowing Marek “Humanoid” Brázda to counter pick with Leblanc. Zhiqiang “Shad0w” Zhao then picked Olaf into Lee Sin, leaving Martin “Wunder” Hansen to blind pick Sett top. Rasmus “Caps” Winther shockingly picked an old Ezreal counter in Vayne. It was Caps’ second Vayne game of his career and first as an ADC. Andrei “Orome” Popa then got a high value Gangplank as the last pick.

Things went G2’s way early as First Blood king Marcin “Jankos” Jankowski made his way bot at three minutes. Mihael “Mikyx” Mehle led with an exhaust on the overextended bot lane of MAD, allowing Jankos and Caps to run them both down. Caps’ Vayne got an early double kill and Matyáš “Carzzy” Orság was punished for running heal over teleport.

The gold remained even into the mid game, but G2 felt the stronger side in skirmishes. After Jankos stole the first dragon out from under Shad0w, G2 took the first three of the game. A Baron force at 23 minutes led to another four kills and the objective for G2, opening up a nearly 4k gold lead.

G2 didn’t close out cleanly, but got there eventually. They picked up Cloud Soul before finding the game-winning fight at 30 minutes. Caps flashed into MAD’s base to pick up a pair of kills and G2 finally had the push they needed to end. Cap’s first ADC Vayne game was a success, as he finished 14/4/5 in G2’s 23 kill to 11 win in 30:30. Mikyx’s Yuumi went 0/2/22, giving him 95.6% kill participation.

G2 kept their Yuumi priority in game two, again on blue side. MAD Lions started with very early game oriented champions like Nautilus and Lee Sin in their rotation before pivoting to Kai’Sa and a blind pick Maokai with their next two picks. G2 opted to match MAD’s late scaling with Cho’Gath and Cassiopeia in their solo lanes. Humanoid rounded out MAD’s dive composition with Qiyana. MAD would have to win hard early to play around the fact that G2’s Trundle, Ezreal, Cassiopeia, and Cho’Gath all welcome dives into them in team fights.

Shad0w did his best to accomplish that by visiting top lane for First Blood. He caught Wunder extended in the lane, forcing his flash before killing him. Shad0w then got both summoners out of Luka “Perkz” Perković before killing him, though he fell to Jankos’ Trundle on the counter gank.

A three for zero team fight at 16 minutes put MAD up 1.5k gold, but they opted to use that win to secure Rift Herald instead of putting G2 on Mountain Soul. While giving MAD an extra influx of 500 gold immediately, it gave G2 more time to scale, not to mention the extra tank stats to boost Cho’Gath and Trundle.

What could have been a 50/50 fight for Mountain Soul at 22 minutes turned into G2 establishing dominance in the game. MAD weren’t far enough ahead with their dive comp, and the mountain drakes G2 started stacking made it harder and harder for Qiyana and Kai’Sa to do their jobs. G2 could just group as five and roll over MAD, leading them to a 16 kills to 8 win in 26 minutes. Wunder’s Cho’Gath picked up multiple solo kills and finished 8/2/6, despite being a First Blood victim.

MAD got their first blue side of the series in game three, allowing them to change up their bans. They took away Mikyx’s Yuumi, leaving them to flex their first pick Ornn. Humanoid opted to pick Leblanc in MAD’s second rotation, giving Perkz the Yasuo matchup while allowing Wunder to save the last counter pick. He picked Ornn into Renekton, giving G2 a hard scaling advantage. They would just have to get there.

This time, G2 could not get there. MAD came out on top of an early 4v4 skirmish bot that saw Carzzy pick up an early double kill at four minutes. Jankos then walked forward to threaten MAD’s recall, but the duo just turned on him and killed Jankos. Carzzy died under G2’s turret for it, but it was just an execution because Jankos had failed to deal any damage to him.

The game is unpaused and we pick up a few fights around mid to get the Baron!

G2 fought back in skirmishes, taking a nine kill to seven lead at one point. But MAD still had the gold advantage from CS and turrets, allowing them to win a fight for Cloud Soul at 23 minutes. A pick on Wunder at 25 minutes turned into a pick on Jankos, allowing MAD to grab Baron. With that and Cloud Soul, MAD had all they needed to pick up their first win of the series. Shad0w’s Jarvan IV finished 4/0/14 in MAD’s 21 kill to 12 win in 29 minutes.

A Yuumi ban on red side from MAD Lions opened the doors for a first pick Kalista for G2 in game four. They paired her with Taric, Rek’Sai, and Aatrox, giving G2 more dive potential than they had previously in the series. MAD Lions responded with disengage in the form of Sett, Ezreal, and Bard. Humanoid’s Akali was a bit off-theme with the rest of the composition, but Humanoid must have felt comfortable with the matchup into Azir.

There was an absolutely crazy skirmish to kick things off at five minutes. Norman “Kaiser” Kaiser initially roamed top to set up a dive on Wunder, but he wasn’t the only one to get involved. Nine players eventually fought in the minute-long skirmish top, ending with a five kill to four lead for MAD Lions.

Unfortunately for MAD, Caps’ Kalista spent the entire time freezing the bot wave. He earned a huge CS lead and level advantage that would carry G2 through the early fight loss.

That's a one way trip @MADLions_LoLEN 💀

MAD Lions attempted to regain tempo with a four-man play bot, but Perkz had backup lurking for a counter gank. His Emperor’s Divide separated MAD and allowed G2 to pick up two kills for none. Meanwhile, Caps solo pushed down MAD’s mid inner turret to grow G2’s gold lead to over 4k by 13 minutes.

With such early control, G2 turned it into an Ocean Soul at 27 minutes. They then won a fight around Baron to secure that objective at 30 minutes to spell the end of MAD’s magical Spring season. G2’s final push could not be repelled as they took the series with a 28 kill to 17 win in 32 minutes. Caps finished 8/1/10 with a 99 CS lead on Carzzy in game four.

Get ready Fnatic, we're coming for you!

Listen in as @G2Jankos recaps our Semi-Finals win against MAD Lions and has a few words for our opponents in tomorrows #LEC Spring Final!

G2 Esports will take on Fnatic in a rematch of the 2019 Summer finals.The two teams will meet Sunday, April 19th at 8 a.m. PST.