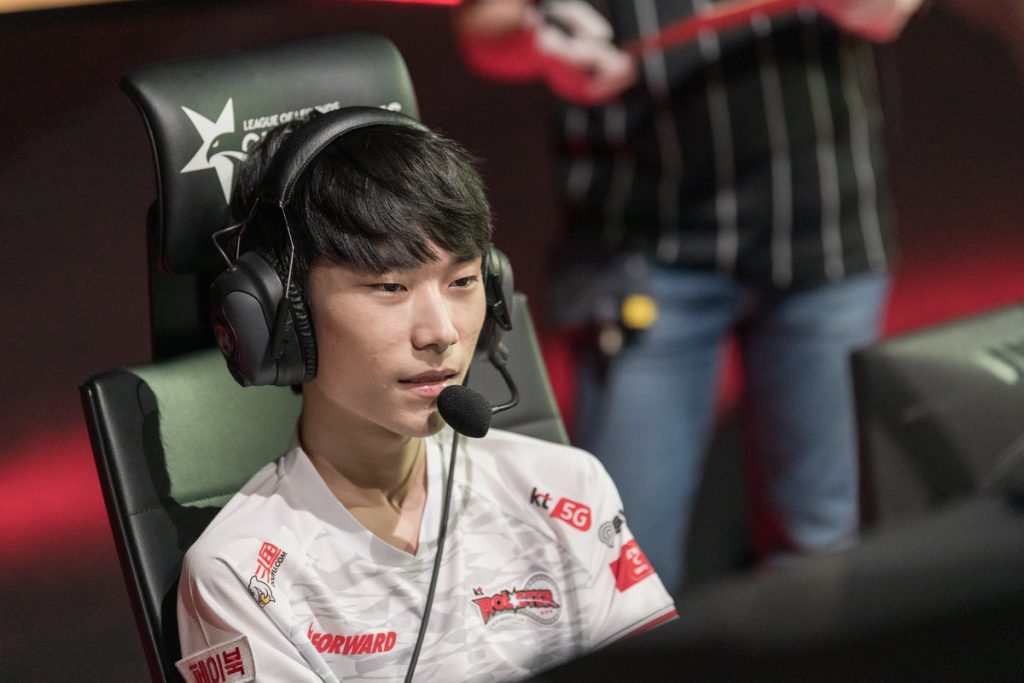 KT Rolster made another change to their lineup, starting Malrang over bonO in week eight. (Photo courtesy LCK - Riot Games)

The League of Legends Champions Korea (LCK) completed their eighth week of the 2020 Summer Split. KT Rolster are searching for answers with their roster as they are on the edge of playoff elimination, while T1 have stuck by their week seven roster change. We take a look at where things stand in the LCK by looking at the top story lines so far in Korea.

Coming off a 10-8 Spring Split that saw them make the playoffs, KT Rolster didn’t stand pat heading into the Summer. They began by picking up their former star mid laner Son “Ucal” Woo-hyeon. Ucal was released from his contract by Griffin after they failed to re-qualify for the LCK in the Spring Promotion tournament. But KT Rolster did not stop there. Sensing weakness in their top lane play, KT Rolster also signed their old legendary top laner Song “Smeb” Kyung-ho. Smeb sat out the Spring Split after going unsigned following the 2019 season.

While it never seems like a bad idea to acquire talent whenever it’s available, the moves were peculiar at the time. Incumbent mid laner Lee “Kuro” Seo-haeng had just been signed in the off-season and was one of the major reasons KT turned their Spring Split around and made the playoffs. Even if Ucal represented a potential mechanical upgrade, Kuro is the type of player who has consistently made his team better, much in the mold of a player like FunPlus Phoenix mid laner Kim “Doinb” Tae-sang.

The Smeb signing made more sense in that KT Rolster struggled to get consistent play from Kim “SoHwan” Jun-yeong or Jeon “Ray” Ji-Won, but there was a reason Smeb went unsigned to begin 2020. That includes by KT Rolster, who moved on from Smeb to sign SoHwan and Ray as his replacement. Despite a stellar career, Smeb was undeniably one of the worst top laners in the LCK in 2019 and looked like he was done.

KT Rolster started their season with SoHwan and Ucal as their solo laners, but two opening losses brought immediate changes. Smeb and Kuro moved into the starting lineup in week two, helping KT beat Hanwha Life Esports. There have been few consistent lineups since then, including the weekend that both SoHwan and Smeb played after Park “TusiN” Jong-ik fell ill.

In their latest iteration, KT Rolster started Smeb and Ucal in week eight. However, they also finally made a roster change at another position. Jungler Kim “Malrang” Geun-seong replaced Kim “bonO” Gi-beom in game two against T1 in week seven and has started every game since. The former Jin Air Green Wings player is meant to offer more consistency from the jungle position, as bonO is known as a “coin-flip” jungler.

KT takes down 4 members of HLE in the final fight, leading to the 2:1 victory in the series #KTWIN #LCK pic.twitter.com/MpnjlcKKJx

KT Rolster took their expected win over Hanwha Life Esports, even if they lost the opening game. Malrang played Graves in all three games, going an unremarkable but steady 8/9/17 in the three games. KT Rolster then took a game off Gen.G in their second series. After falling in game one, KT won game two 14 kills to 7 in 34 minutes. Malrang went 3/1/6 on Nidalee, out-pacing Kim “Clid” Tae-min’s Kha’Zix. Unfortunately, Clid had the better end of the other two matchups. Malrang went a combined 0/11/6 in the two losses.

Now only 6-9 on the season, KT Rolster will need help from Afreeca Freecs to make a run at the final playoff spot. AF took care of Team Dynamics 2-1 to extend their lead over KT, upping it to two-and-a-half games. Afreeca Freecs have four matches remaining to KT Rolster’s three. KT will probably have to win out to have any hope of making the playoffs, though AF still have matches left against T1 and Gen.G. KT Rolster and Afreeca Freecs also meet on the first day of week 10 in a match that could determine the fifth and final playoff spot.

KT Rolster get to play the 1-14 SeolHaeOne Prince for their only matchup in week nine.

TEAM DYNAMICS ELIMINATED FROM THE PLAYOFFS

Team Dynamics looked like a promising team coming into the LCK this Summer. They destroyed SANDBOX Gaming 2-0 on their way to qualification, then followed that up by winning their first LCK series 2-0 over Spring playoff team KT Rolster. Team Dynamics picked up wins in two of their next three matches to start their inaugural split 3-1, looking every bit like an instant playoff team.

Unfortunately, the rest of the season has not been kind to Team Dynamics. Team Dynamics have picked up just one win since week two and are now on a seven match losing streak. The rest of the league has seemingly caught on to the rookie team after the fast start, much like the LPL did with eStar.

We fought but lost to Afreeca Freecs by 1:2 in the end. We'll keep trying to end our loss streak. Thank you.#DYN #DYNTOGETHER #팀다이나믹스 pic.twitter.com/99nhTtkaAf

Team Dynamics lost to both Afreeca Freecs and T1 in week eight to eliminate themselves from playoff contention. Needing a win over AF to stay alive in the playoff race, TD picked up what has become a rare game win in game two. Lee “Kuzan” Seong-hyeok’s 4/0/14 Karma enabled Seo “deokdam” Dae-gil’s 8/3/6 Caitlyn, allowing him to carry with a team-high 23.5k damage. However, that was the only game TD could take off AF. AF comfortably won game three 25 kills to 12 in 30 minutes to essentially end TD’s season.

Of course, Team Dynamics still have to play out the rest of their schedule. Now playing to improve for what they hope will be a spot in the franchised 2021 LCK Spring, TD took on T1 in their second match. Kuzan had a strong showing in game one, but TD’s bot lane struggled and Park “Teddy” Jin-seong took advantage. The T1 star went 4/0/5 on Ezreal to take game one. T1 then crushed TD in game two, conceding only two turrets and one kill in a quick 25 minute win.

To their credit, Team Dynamics have stuck by their young roster throughout. The same five players who played in the CK in Spring and qualified through the promotion tournament have started every game for TD in the LCK. Now that TD are officially eliminated heading into week nine, we may see some of their trainees get a chance in the starting lineup. Both Kuzan and support Kim “GuGer” Do-yeop see their contract expire at the end of this year, meaning they could be the most at risk to losing their starting spot.

TD continue their season with a matchup against the top-ranked DAMWON Gaming in week nine. TD then draw the two worst teams in the LCK in SeolHaeOne Prince and Hanwha Life Esports to close the season.

CLOZER CONTINUES TO START OVER FAKER

Besides finding playing time for a player who earned it, T1’s stated goal in playing Lee “Clozer” Ju-hyeon was to make the team more aggressive. When playing with a player as great and as respected as Lee “Faker” Sang-hyeok, teammates — especially new ones — can get caught up in deferring to Faker’s greatness. If you know that just taking a game late would mean that Faker can carry your team to a win, wouldn’t you be more cautious in your play?

T1 continued their winning ways, sweeping both SeolHaeOne Prince and Team Dynamics 2-0 to clinch T1’s playoff spot. Clozer had another good weekend, going a combined 15/5/17 in the wins. Outside of a blah 2/4/4 game one against Team Dynamics, Cuzz dominated with a 9/1/26 in the other three games. Though nobody would argue that Clozer is a better player than Faker right now, T1 undeniably have looked better since Clozer entered the starting lineup.

With that being the case, it becomes interesting to see when Coach Kim will bring Faker back into the starting lineup. T1 have played the weakest part of their schedule with Clozer, but that changes in the final two weeks. T1 close their season against Afreeca Freecs, DAMWON Gaming and DRX. Considering that each jump in the standings is essentially a series win in the LCK playoff format, T1 will be trying their best to move up in the final two weeks. We don’t know if Coach Kim would have gone to Faker if T1 lost any games with Clozer, but his leash will probably be much shorter against these quality opponents. 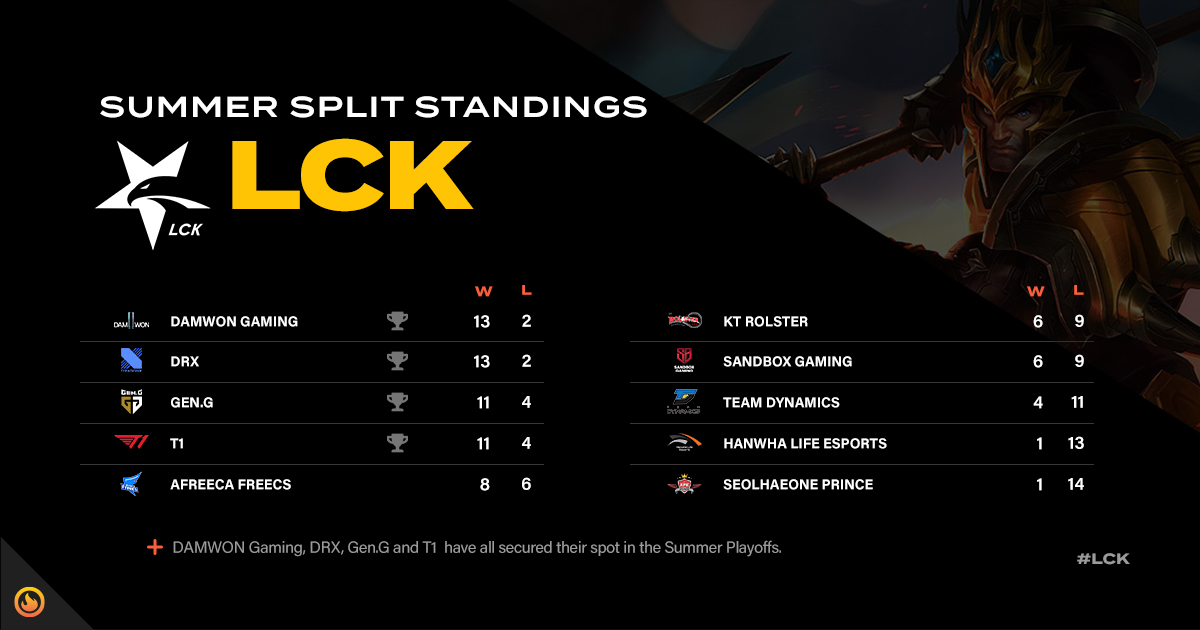 DAMWON Gaming took care of Gen.G and SeolHaeOne Prince to remain the top team in the LCK. DRX are tied in match record, but their inferior game record puts them in second. Those two, Gen.G, and T1 have all secured their playoff spots with two weeks to play.

On the other side, SeolHaeOne Prince, Hanwha Life Esports, and Team Dynamics have all been eliminated from playoff contention. KT Rolster and SANDBOX Gaming are trying to track down Afreeca Freecs, but they have little margin for error.

SANDBOX Gaming basically need to win out and hope for Afreeca Freecs to lose, so they’ll need to start by proving they can beat a top team. Though they’ve played much better since Coach Jakob “YamatoCannon” Mebdi showed up, SB have only beaten the weak teams and lost to the good teams. Gen.G are coming off a loss to DAMWON Gaming and don’t want to fall behind T1 in the standings. They still have a shot at reclaiming the first seed as well, but it will require them to start by beating SANDBOX.

Afreeca Freecs can all but clinch their spot in a playoffs with a win over T1. T1 are in a tight race at the top of the LCK, and with every spot in the standings worth so much, they’ll be taking AF very seriously. That makes it so interesting to see whether Coach Kim sticks with Clozer or puts Faker back in the starting lineup. T1 have played better with Clozer, but this hot streak has also come against weak competition. Clozer will probably continue to start until T1 loses, but expect Faker to come in following any loss.