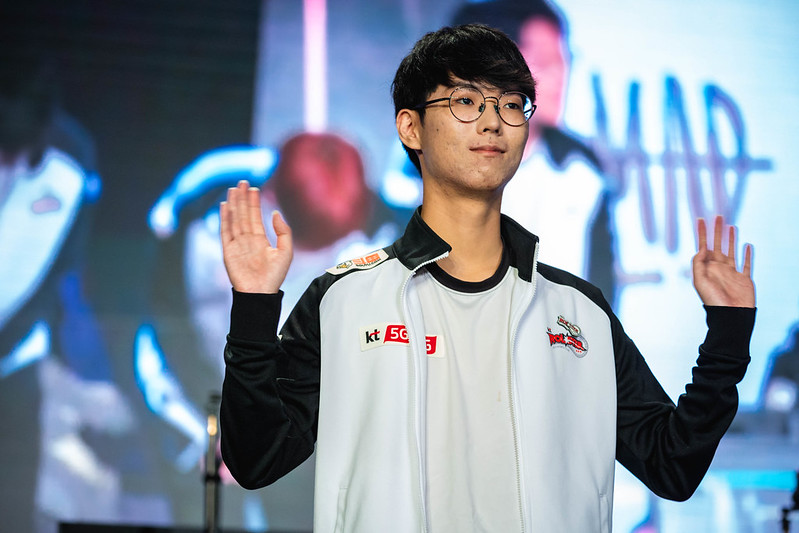 Ucal is back with KT Rolster after stints with Afreeca Freecs and Griffin. (Photo Courtesy Riot Games - LCK)

KT Rolster have announced the acquisition of mid laner Son “Ucal” Woo-hyeon. Ucal was released by Griffin, among a handful of others, after the team failed to re-qualify for the LCK in the Spring Promotion tournament.

This will be Ucal’s second stint with KT Rolster. He debuted for the team in 2018 Spring on a loaded roster that featured Song “Smeb” Kyung-ho, Go “Score” Dong-bin, Kim “Deft” Hyuk-kyu, and Cho “Mata” Se-hyeong. That starting lineup would go on to win the 2018 Summer Split before losing in the quarterfinals of the World Championship to the eventual champions Invictus Gaming.

KT Rolster then signed Gwak “Bdd” Bo-seong for 2019, forcing Ucal to leave for Afreeca Freecs. Ucal played for Afreeca through 2019 before signing on to play with Griffin just before the start of 2020 Spring.

Though he is a great player, Ucal is not necessarily walking back into a starting spot on KT Rolster. Lee “Kuro” Seo-haeng is a very accomplished mid laner and is coming off of a strong split in which he guided KT Rolster to a strong second half. Considering how well KT progressed after a slow start, it would be surprising to see them make the switch immediately, especially considering how strong of a voice Kuro has in shot calling.

Another possibility would be for Ucal to start training as a top laner. Kim “SoHwan” Jun-yeong wrestled the starting role away from Jeon “Ray” Ji-won during the Spring Split, but a player of Ucal’s caliber could upgrade the position. Ucal did play several champions that can flex top during his time with Griffin, including Sylas, Rumble, Ornn, Sett, Pantheon, Jayce, and Renekton. As Jeong “Chovy” Ji-hoon showed with DragonX, there is more overlap than ever between the champion pools of the two roles.

At the very least, KT Rolster get to secure more depth as we enter the second half of the year. The team will be pushing for a World Championship spot after a fifth place finish (10-8) in the Spring Split. The LCK resumes with the Summer Split on Wednesday, June 17th.