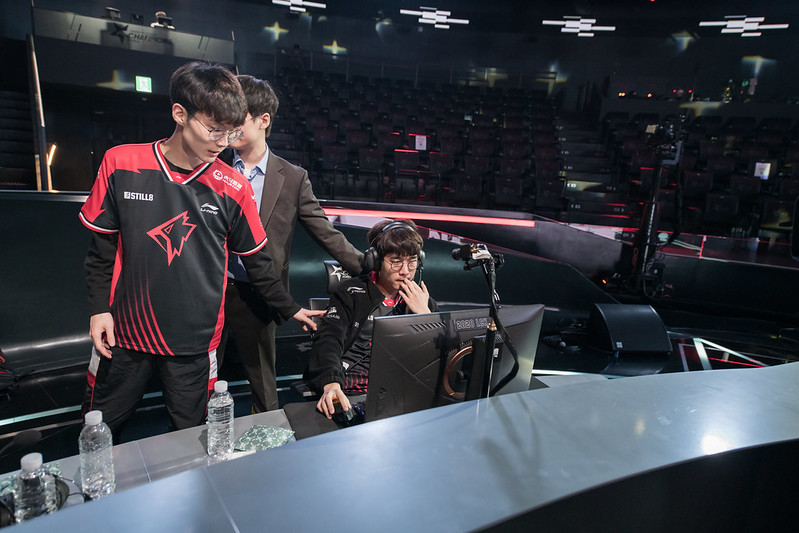 We may have seen the last of Griffin in the LCK after their loss in the Promotion tournament. (Photo courtesy Riot Games - LCK)

The end of the LCK Spring Season isn’t the end of the action until the Summer Split. Four teams — Griffin, SANDBOX Gaming, Seorabeol Gaming, and Team Dynamics — competed for the final two spots in the LCK in the 2020 Summer Promotion tournament.

Change is coming for the LCK, as Team Dynamics will replace Griffin for the Summer Split. Meanwhile, SANDBOX Gaming held off Seorabeol Gaming to re-qualify.

What seemed unfathomable just a year ago is now true. Griffin are no longer in the LCK. The team that was the best in the world during a 12-0 stretch in 2019 Spring is gone. Disappointing losses to Seorabeol Gaming and SANDBOX Gaming sealed their fate.

Griffin first loss to CK team Seorabeol Gaming 2-1. Despite the addition of Kim “WADID” Bae-in, it became clear in this series that the issues that plagued Griffin during 2020 Spring still persisted. A nice game one win gave way to a crushing 28 minute defeat in game two. SRB then invalidated Park “Viper” Do-hyeon’s Kalista with Trundle and Cassiopeia picks to neutralize Griffin’s only threat in game three, taking the series.

We did not win today's match. Thank you for supporting Team Griffin. We will come back new and improved. Thank you. pic.twitter.com/UAvKtL4iZ8

With their LCK futures on the line, Griffin faced SANDBOX Gaming. If you were looking for a team to come together, overcome the odds, and perform one last throwback performance to the glory days — this was not it. Griffin were lifeless in quick 2-0. Choi “Sword” Sung-won and WADID were subbed out after a 10 kill to 1 defeat in the opener. Park “Untara” Ui-jin and Jeong “Irove” Sang-hyeon didn’t fare any better. Griffin lost 11 kills to 7 in game two to end the series. Captain and star jungler Lee “Tarzan” Seung-yong finished the series 0/4/2.

Viper is still playing at an elite level, but the same cannot be said for Tarzan. Like Song “Smeb” Kyung-ho before him, Tarzan has unthinkably gone from one of the best in the world in his role to a total liability on the rift. Unfortunately, the timing for his downswing will call into question the rest of his stellar career. Tarzan was once praised as the engine that made Griffin go. Now that he didn’t perform after the split, it’s fair to wonder if Jeong “Chovy” Ji-hoon and Son “Lehends” Si-woo got less credit than they deserved — and if Tarzan got more. It would be hard to picture Griffin without Tarzan, but Griffin might not be sticking around for too much longer.

With their demotion and the news that the LCK is moving to a franchising system in 2021, Griffin may have played their last split in the LCK. For all of their previous success on the rift, Griffin never delivered a championship that would etch their names in LCK history. Their organization is obviously under heavy scrutiny after their issues with both Kim “cvMax” Dae-ho/Sword and new LPL MVP Seo “Kanavi” Jin-hyeok’s unfair contract. So, with a recent history of legal issues, no strong championship moments, and a squad that just got relegated to the CK, you have to wonder what appeal Griffin would have to Riot Games Korea as a partner next year.

SANDBOX Gaming aren’t done in the LCK just yet. Unlike Griffin, SBX were able to overcome an early loss to Team Dynamics to re-qualify themselves for the Summer Split. They swept Griffin 2-0 and Seorabeol Gaming 3-0 in convincing fashion.

It very much looked like there would be two new LCK teams after the first match of the promotion tournament. Team Dynamics, considered the weaker of the two CK teams heading in, smashed SANDBOX Gaming 2-0 in the first series. Park “Summit” Woo-tae had 0/5/4 and 1/3/1 performances on Kennen and Aatrox, Kim “OnFleek” Jang-gyeom got thoroughly out-jungled by Kim “Beyond” Kyu-seok, and SBX were on the brink of LCK elimination.

After SANDBOX quickly took care of Griffin, they faced Seorabeol Gaming in the final match of the promotion tournament. As hyped as Lee “KaKAO” Byung-kwon and SRB were entering this tournament, SBX took care of them rather easily. Yoo “FATE” Su-hyeok outclassed Yang “Danchung” Hyeon-jong throughout the series, going 25/4/17 across the three games. OnFleek had a redemptive performance in shutting KaKAO down. KaKAO was held to 1/7/2, 1/2/5, and 1/7/5 scores, while OnFleek combined to go 6/5/37.

After a full season of tinkering, SBX may have found their starting lineup entering the Summer Split. Summit, OnFleek, FATE, Moon “Route” Geom-su, and Kang “GorillA” Beom-hyun all started every game of the promotion tournament. Even though they lost to Team Dynamics, the team improved throughout the tournament, and they could benefit from some time playing with the same starting lineup.

Even if SANDBOX Gaming were still in strong consideration for a franchised spot in the LCK, staying away from relegation can only help. It also doesn’t hurt that they’ll save $2 million on their application fee.

The most impressive performance in the promotion tournament undoubtedly came from Team Dynamics. The second place CK team was second to none in this tournament, sweeping both SANDBOX Gaming and Seorabeol Gaming 2-0 to promote into the LCK.

After their aforementioned win over SBX, Team Dynamics faced off against SRB for the right to promote. Team Dynamic were just 1-4 (game record) against SRB during the regular season, so they were considered big underdogs heading into the series. However, DYN played like they had a deadline to get into the LCK, winning their games in 27 and 23 minutes.

Team Dynamic have a couple of players that you might be familiar with on their roster. Their support Kim “GuGer” Do-yeop played on both NaJin White Shield and Najin Black Sword way back in 2014. He also went on to play for Taipei Assassins and Kongdoo Monster before working his way back through the LJL and CK.

But DYN’s most famous player is surely Lee “Rich” Jae-won. Rich is widely considered to be the best Heroes of the Storm player of all time, winning multiple championships with MVP Black and Gen.G. When Blizzard shut down their support for competitive HotS, Rich started the transition to League of Legends. He stayed on with the Gen.G organization and debuted with them in the LCK 2019 Summer in mid lane. Gen.G went 2-3 in his five games that season.

Rich then left Gen.G for Team Dynamics in the off-season and transitioned to top lane. That bruiser play style has meshed more with his HotS background, allowing him to develop into an LCK caliber top laner in less than a year. In his two games against Summit, Rich went 3/3/15 and held Summit to a 1/8/5 score. He was even better against Thal and SRB, going 7/3/14 on two Aatrox games.

Team Dynamics are guaranteed only one split in the LCK, but the ramifications for the organization will be huge. They will get a chance to further their brand, build up a fanbase, and show they can compete in the league. And, like SBX, the guaranteed buyout of their LCK slot will make the victory that much sweeter.