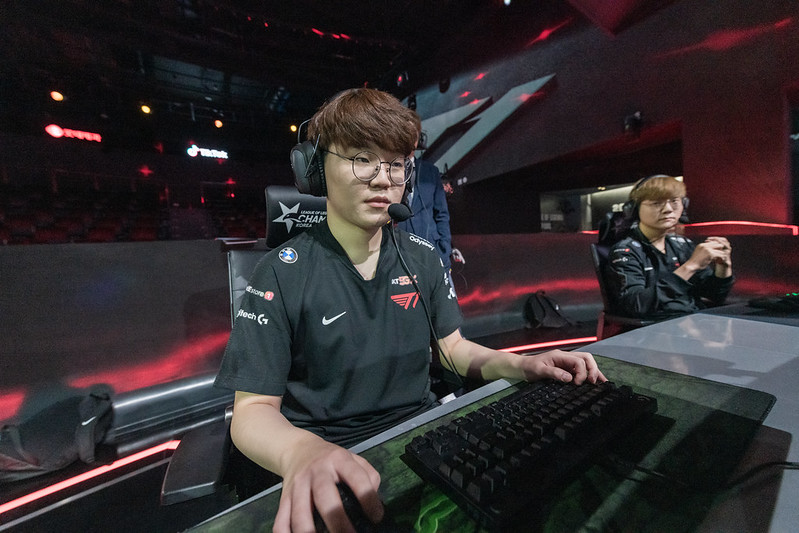 All eyes were on Clozer in his professional debut. (Photo courtesy LCK - Riot Games)

The League of Legends Champions Korea (LCK) completed their seventh week of the 2020 Summer Split. T1 made a surprising call to bench another one of their starters for a rookie, while DAMWON Gaming’s big win over DRX has them positioned to take over the lead in the LCK. We take a look at where things stand in the LCK by looking at the top story lines so far in Korea.

Lee “Faker” Sang-hyeok is indisputably the best League of Legends player of all-time. He has more wins than anyone else, has played at a higher level than everyone else, and no player was ever farther ahead of the pack in terms of raw skill. T1 rewarded Faker with another multiyear contract this off-season, this time making him a part owner of the organization. Faker will almost certainly play out the rest of his career with T1, the only organization he has ever known.

That said, while Faker remains one of the best mid laners in the LCK, he is no longer head-and-shoulders above the rest of the league. Jeong “Chovy” Ji-hoon, Gwak “Bdd” Bo-seong, and Heo “ShowMaker” Su all have legitimate arguments to be named the best mid laner in Korea. That doesn’t mean that Faker has gotten any worse. In the same way that today’s professional athletes are just more athletic than their predecessors, today’s League of Legends players are just better than they were when Faker debuted in Season 3.

With that in mind, and knowing that Faker can’t play forever, T1 signed their mid trainee Lee “Clozer” Ju-hyeon to a three-year extension before the season. Clozer was 16 years old at the time, so even then he was not eligible to actually play in the LCK until his next birthday. Clozer turned 17 on July 27th, which happened to come at a time that T1 were struggling — by their lofty standards — in the LCK. T1 entered week seven 7-4, and their fourth place standing accurately represented where they stood in the LCK pecking order. So, with their first opportunity to play him, T1 started Clozer in place of Faker in both week seven matches.

T1 and Clozer opened against KT Rolster. In his professional debut, Clozer was the only deathless player in the game, going 5/0/4 on Zoe. He also dealt a game-high 19.9k damage, earning himself player of the game. Clozer then followed it up with an 8/2/0 game on Akali, one of his signature champions. Had Park “Teddy” Jin-seong not gone bonkers on Aphelios, Clozer might have earned back-to-back MVPs in his first two games.

Clozer gets an incredible solo kill in just his second match in the #LCK @T1LoL pic.twitter.com/0eldoYrFNU

T1 stuck with Clozer in their second match against SANDBOX Gaming. Clozer didn’t have to do much in game one, going 1/1/3 on Zoe as T1 won 14 kills to 2 in only 25 minutes. Teddy carried once again, going 8/0/6 on Ezreal. Clozer finished his week off with a 4/1/6 Zoe performance in T1’s second win over SB. His jungler Moon “Cuzz” Woo-chan, who looked much more aggressive with Clozer in this weekend, went 8/1/4 on Rek’Sai to lead the charge.

In all, Clozer’s opening weekend was a huge success. The rookie went 18/4/17 in his four games, winning all four. The team played well around him as well, especially Cuzz and Teddy. Though Clozer only showed two champions in Zoe and Akali, it was also notable that they both have very different play styles.

Now, does any of this mean that Faker is actually benched and we should expect Clozer to be in the starting lineup going forward? Definitely not. Not only have we seen Faker split time with other great mid laners before —  Lee “Easyhoon” Ji-hoon and Lee “Scout” Ye-chan come to mind — T1 have already made a similar move in jungle in 2020. Choi “Elim” El-lim earned himself play time on the main roster, getting starts for the team even as Cuzz was playing like a top LCK jungler. T1 like to get their rookies stage time, and Clozer is obviously no exception.

With T1 set to play SeolHaeOne Prince and Team Dynamics in week eight, Clozer may well be in the lineup once again. But should T1 slip up during either series, it wouldn’t be surprising to see T1 turn back to their part owner.

DAMWON Gaming were underwhelming in the Spring Split. After opponents talked about how terrifying of a scrim team DWG were at the World Championship, DWG seemed poised to take a step forward. They retained all of their starters from their 2019 run, and considering how talented they all are mechanically, it seemed only natural that the macro play would come. That’s what experience and coaching are for.

That expected growth didn’t come in the Spring. After DWG navigated their way to an inconsistent 9-9 regular season record, they were dispatched 3-2 by DRX in the quarterfinals of the playoffs. For a team with so much talent, the result was disappointing. Maybe they just got hot at the end of 2019 and weren’t ever true contenders in the LCK.

DWG added on to that game lead over DRX with a decisive 2-0 victory to open the week. Neither game was close. DWG got ahead early in game one, and though they had already climbed to a 6.2k gold lead by 19 minutes, DWG seemed to want to drive home a point. Instead of closing out the game, DWG hunted kills. DWG picked up another 16 kills from that point, resulting in a 28 kills to 3 win. Though they hunted kills, DWG still only needed 29 minutes to close out DRX.

Game two was less bloody, but just as lopsided. A four-for-zero fight at 19 minutes put DWG in the lead for good, leading to Baron, Infernal Soul, and an easy match win. DWG led 17 kills to 4 in the 27 minute win. ShowMaker had a statement series, going 9/1/25 compared to Chovy’s 2/12/2.

is that Jayce damage even legal?? big damage from Nuguri and Showmaker lead to @DamwonGaming taking the first game over @HLEofficial #LCK pic.twitter.com/HDWAy4YSja

After dominating their huge matchup, DWG didn’t let up in their subsequent match against Hanwha Life Esports. DWG won game one 21 kills to 8 in 25 minutes, then completed the sweep with a 17 kills to 2 win in 21 minutes in game two. ShowMaker combined to go 18/1/13 in the two games, bringing his weekend total to 27/2/38.

With such a convincing win over the LCK’s top seed (DRX are 12-2 to DAMWON Gaming’s 11-2), DWG surely have to be considered the best team in Korea heading into week eight. They’ll look to prove that when they open against Gen.G. DWG then get a soft matchup against SeolHaeOne Prince to close the week. 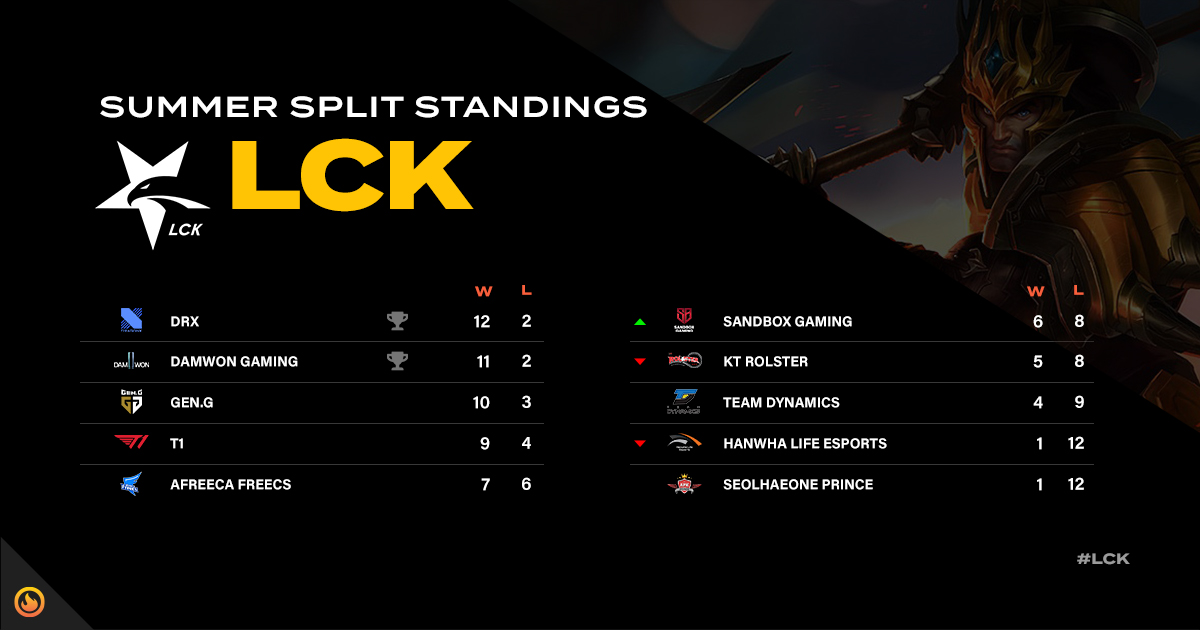 DRX still sit atop the LCK on match record, but one win from DAMWON Gaming would give them the top spot based on game record. Gen.G took care of business against SeolHaeOne Prince to continue in third, while T1 picked up two wins in Clozer’s debut.

SeolHaeOne Prince and Hanwha Life Esports have both been eliminated from playoff contention with three weeks left to play. Team Dynamics are trending that direction after a fifth straight loss, this time to SANDBOX Gaming. Afreeca Freecs continue to hold on to the fifth and final playoff spot.

DAMWON Gaming would overtake DRX with a win, no matter the game score. Gen.G won the first matchup 2-1 in week two, but DWG have taken off since to become the best team in the LCK since then. ShowMaker against Bdd is a tantalizing matchup, but the keys to victory will be in the side lanes. Kim “Rascal” Kwang-hee will be tasked with holding down Jang “Nuguri” Ha-gwon, while Jang “Ghost” Yong-jun will play the weak side and try not to give any advantages to Park “Ruler” Jae-hyuk.

DRX rebounded well from DAMWON Gaming’s smack down with a 2-0 speed run of Afreeca Freecs. SANDBOX Gaming followed a nice 2-1 win over Team Dynamics with a 2-0 loss to T1. DRX should be heavily favored in this one, as SB’s improvement has yet to result in any wins against top teams. SB can’t match the individual prowess of players like Chovy, Kim “Deft” Hyuk-kyu, and Ryu “Keria” Min-seok, so their best chance is to play through Park “Summit” Woo-tae and hope for the best.