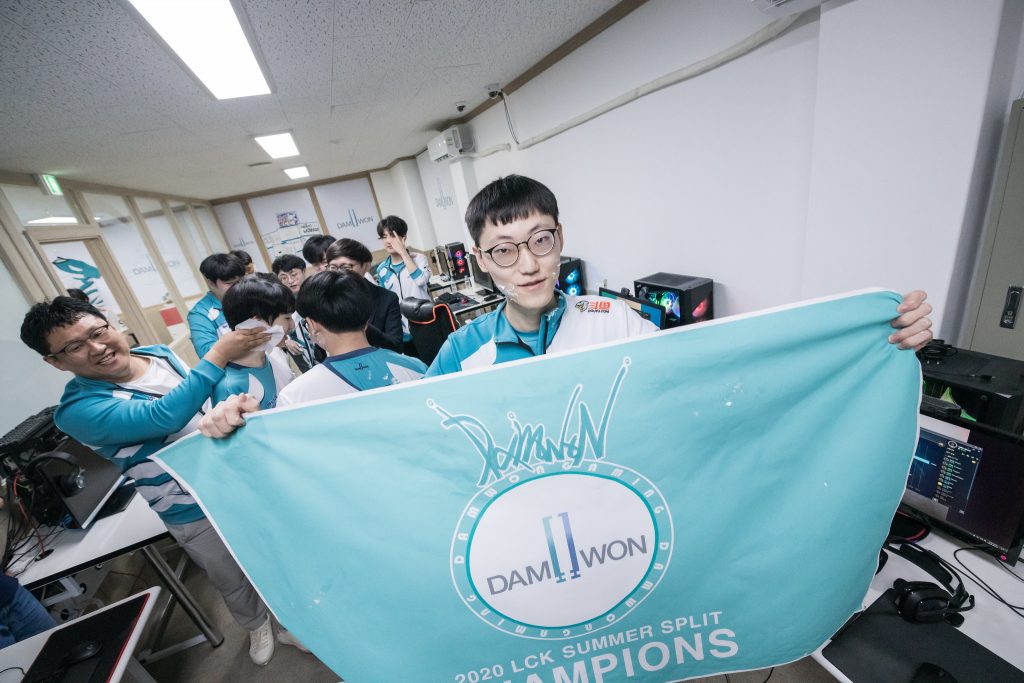 After a tumultuous year that forced the LCK to go online, the 2020 Summer Split is now complete. DAMWON Gaming proved they are among the world’s elite with a dominating 3-0 sweep of DRX in the Finals. Meanwhile, the field for Korea’s Regional Finals has been set. With T1 still in contention, they have questions to answer about their starting mid laner.

DAMWON Gaming have long been known as one of the most talented teams in the Worlds. The whispers started all the way back at 2018 Worlds. Teams bootcamping in Korea talked about the amazing Challengers team that was dominating Worlds participants. After a 13-1 season in 2018 Summer, DAMWON qualified for the LCK beginning in 2019 Spring. Two playoff runs and a Regional Finals win later, DWG made Worlds in their first year as an LCK team.

Once again, the teams at the World Championship could not stop talking about how good DAMWON Gaming looked in scrims. But, just like their 2019 splits, it did not translate consistently enough on stage. DAMWON Gaming got out of groups but fell to G2 Esports 1-3 in the quarterfinals. It was a great result for their inaugural year in the LCK, but there was a sense that DWG could have gone further.

To some surprise, DWG were able to keep their starting roster intact heading into 2020. With that continuity, expectations only grew. That continuity and expected growth moved us to rank DAMWON Gaming as our top team in the LCK heading into 2020 Spring. Unfortunately, DWG had their worst split so far in the LCK. Their 9-9 record was barely good enough to squeak into the playoffs, where they were bounced by DRX in the second round. The coronavirus delays could have played a part in their struggles, but every team was dealing with issues in some form.

Whatever shortcomings they had in the Spring disappeared in the Summer. DWG committed to Jang “Ghost” Yong-jun and Cho “BeryL” Geon-hee full time, allowing them to blossom into one of the best bot lanes in Korea. DWG had one of the best regular seasons in LCK history, going 16-2 with a ridiculous 34-5 game record. That dominance that teams said DWG regularly displayed in scrims was finally showing up in league play — consistently. All that was left, now, was for DWG to prove that they can seal the deal under the pressure of the playoffs.

DAMWON Gaming did just that in the Finals, obliterating DRX in three games to win their first LCK title. DWG opened the series by allowing Hong “Pyosik” Chang-hyeon to have Lillia on red side, but that didn’t matter. Nuclear showed the capability of playing the highly prioritized Caitlyn, going 4/1/5 while dealing a game-high 32.2k damage. Jang “Nuguri” Ha-gwon even opened the series on a tank, going 2/0/5 on Ornn. DWG took game one 10-kills-to-5 in 38 minutes.

The subsequent games were even more one-sided. DWG’s bot lane had another great showing in game two, going a combined 9/2/22 against what is widely considered Korea’s best bot lane in Kim “Deft” Hyuk-kyu and Ryu “Keria” Min-seok. The DRX duo was held to a 0/10/7 score in DWG’s 32-minute win. Eschewing any drama, DWG immediately shut the door on the series by winning game three in only 30 minutes. Nuguri’s Renekton took care of Choi “Doran” Hyeon-joon’s Shen, going 5/2/2 in DWG’s 24-kills-to-9 win. That gave Nuguri an 11/3/15, good enough to earn him the Finals MVP.

With their Finals win, especially in such dominating fashion, DWG have established themselves as winners when it matters. Considering that was the only real knock on them previously, that is an incredibly terrifying thing for their opponents as they head into the World Championship as the LCK’s top seed. They have a clear identity — playing around their incredible top side with a rock-solid bot side — and clearly have the individual talent to match any team. Even if the LCK as a whole is weaker than the LPL, it would be hard to say any team is looking better than DWG right now.

T1 looked to be priming Lee “Clozer” Ju-hyeon to be their mid laner going into the playoffs. He played in 14 of the final 15 regular season games for T1, while Lee “Faker” Sang-hyeok’s only game was a loss to Afreeca Freecs in their final series. That included T1 staying with Clozer after a game one loss to DAMWON Gaming, a series that was very important for playoff seeding. T1 were playing to win and chose Clozer in both games.

So, even though Faker has made his fame for performing in the postseason, it was no surprise to see Clozer in the starting lineup of round one against Afreeca Freecs. T1 put him on a comfort pick in Zoe, a champion Clozer played half his games on with a perfect 7-0 record. His mid lane opponent Song “Fly” Yong-jun was coming off a very mediocre season, setting up the perfect opportunity to ease Clozer into his playoff debut.

Unfortunately, things went wrong for T1 in game one. After taking a small early lead with the superior scaling side, T1 completely fell apart in the mid game. Afreeca Freecs found a five-for-one ace, giving them Baron to break the game open. Stuck in a poke composition, T1 rolled over from that point, unable to find a pick to get back in the game. AF closed it out quickly, leading 11 kills-to-3 in 29 minutes.

Clozer didn’t make any crucial mistakes, but the loss was enough for T1 to immediately sub in Faker for game two. It paid dividends immediately, as his Twisted Fate picked up First Blood and controlled the map. Faker went 2/0/11, T1 won 19 kills to 3, and T1 seemed right back on track to win the series.

What's done is done, we'll aim for the Regional Qualifiers now. Thank you all who've cheered us this Summer.#T1WIN #T1Fighting pic.twitter.com/icqMLvmVLL

Afreeca Freecs had other plans. Noticing that T1 put all their damage in the hands of Moon “Cuzz” Woo-chan’s Karthus, AF made sure to get ahead early to avoid his late-game scaling. Fly continued the best series of his career by killing Faker’s Sett for First Blood and AF never looked back. They led in gold from start to finish, punishing T1 for drafting so little damage. Even with Faker building tank items on Sett, T1 could not withstand the poke from Fly’s Zoe and Jin “Mystic” Seong-jun’s Ezreal. Afreeca Freecs pulled off the shocking upset with a 12-kills-to-5 win in 35 minutes.

Best-of-three matches lend themselves to more upsets considering the smaller sample size, but this was still a shocking defeat for T1. They had just beaten AF 2-0 with ease in their week nine matchup and had won seven of eight matches heading into the playoffs. This doesn’t end their dreams of making the World Championship, but it does make the path more difficult. T1 will now play in the Regional Finals for Korea’s third and final Worlds spot.

T1 are still one of the favorites to make it out, but they will once again have to answer the question: who is their starting mid laner? And, if the team loses, how long is the leash before the other guy gets his chance?

With the Summer playoffs over, there is only one tournament left for Korean teams to qualify for the World Championship: the Regional Finals. DAMWON Gaming and DRX have both automatically qualified, leaving four teams to battle it out in best-of-five matches for the LCK’s final spot.

KT Rolster and Afreeca Freecs open in round one of the King of the Hill style format. KT Rolster earned 10 championship points by finishing fifth in Spring, while Afreeca Freecs earned 40 for their fourth-place finish in Summer. The winner of that match will take on T1. T1 were in a strong position after their Spring title, but a round one exit in Summer left them fourth in championship points. Gen.G will be the final boss for whichever team is still left standing after second and third place finishes each split.