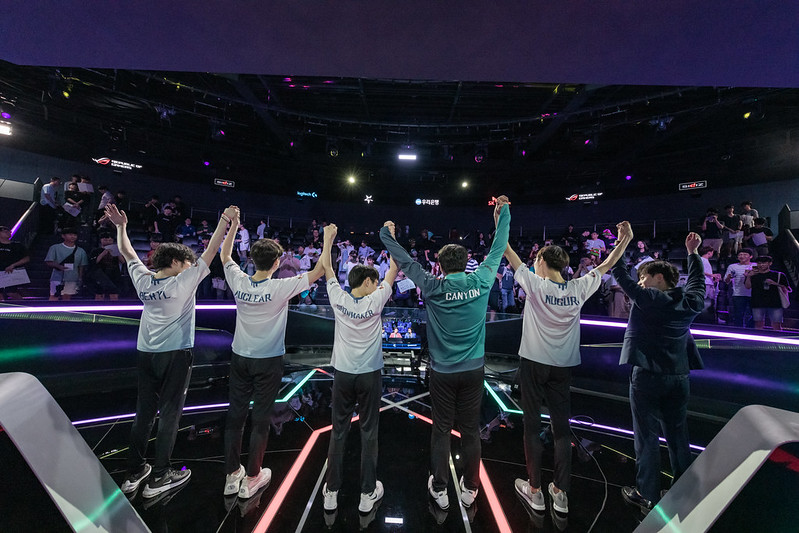 DAMWON Gaming have what it takes to win their first LCK title. (Photo courtesy LCK)

The League of Legends Champions Korea (LCK) 2020 Spring Split begins this week. APK Prince have been promoted in place of Jin Air Green Wings and will battle with the nine returning franchises for Korea’s LCK title. We look at the notable roster changes on each team and where they stack up to the rest of the LCK heading into the new year.

DAMWON Gaming are the only elite team from Korea to keep their 2019 Summer roster intact. The team took a step forward with their consistency from Spring to Summer and reaped the rewards, finishing second in the LCK and making it to the quarterfinals of the World Championship.

The team will remain top-side focused in 2020. Jang “Nuguri” Ha-gwon, Kim “Canyon” Geon-bu, and Heo “ShowMaker” Su are one of the most fearsome trios in the world. The scary thing to consider is that they can still get better by toning down some of their over-aggression. DWG’s bot lane are solid contributors, but are not stars and can cede pressure to some of the dominant ADCs in Korea.

One of the biggest winners this offseason, Gen.G revamped their roster to give Park “Ruler” Jae-hyuk a better supporting cast. The addition of Kim “Clid” Tae-min serves the dual purpose of adding a top-three jungler in the world while also weakening T1. Kim “Rascal” Kwang-hee and Gwak “Bdd” Bo-seong give Ruler the pair of solo laners that should take some of the pressure off him to carry.

Gen.G lost to T1 in the quarterfinals of the KeSPA Cup, but it’s hard to put too much stock into a best-of-three in the preseason. Gen.G look like the team most capable of carrying through any of the four potential carry roles. If the new roster jells, they will be at the top of the LCK sooner rather than later.

It was an offseason of change for T1. They lost Clid and Kim “Khan” Dong-ha, forcing them to retool their roster. The most damaging loss, though, could be longtime coach Kim “kkOma” Jeong-gyun leaving to Vici Gaming. T1 found a good replacement coach in Kim “Kim” Jeong-soo, but it’s hard to follow in the footsteps of kkOma.

Moon “Cuzz” Woo-chan is also one of the best possible replacements for Clid, but T1 enters 2020 with question marks in top lane. Neither Kim “Canna” Chang-dong nor Kim “Roach” Kang-hui are coming off full-time roles. Park “Teddy” Jin-seong remains as the co-carry along with the great Lee “Faker” Sang-hyeok. T1 will always be in the mix with Faker, but their losses have lowered their ceiling.

The surprise of the KeSPA Cup, Afreeca Freecs rampaged through the tournament, taking 3-0 sweeps over DragonX and SANDBOX Gaming. Kim “Kiin” Gi-in has been a dominant top laner in the LCK, but he took it to another level in an MVP-level performance. AF finally fixed their bot lane problems by signing Jin “Mystic” Seong-jun away from Team WE. Mystic was one of the best ADCs in the LPL and he should remain top tier in the LCK.

Mid laner Song “Fly” Yong-jun has been hit-or-miss in his career, but he’s also never been surrounded with the talent he is now. He’s been known for his ability to get out of lane and roam for his team around the map, making him a good fit between two big-time carries. Assuming Lee “Spirit” Da-yoon can hold off Lee “Dread” Jin-hyeok, AF also have a seasoned veteran leading their shotcalls.

Like Gen.G, DragonX kept their ADC and threw everything else away in an effort to revamp their roster. DRX capitalized on the Griffin drama to add Choi “Doran” Hyeon-joon and Jeong “Chovy” Ji-hoon. Head coach Kim “cvMax” Dae-ho also joined from Griffin, though his status remains up in the air as the player abuse allegations are investigated.

Chovy is a huge get as a former MVP mid laner, but Doran is more of a work in progress for DRX. Add in rookies Hong “Pyosik” Chang-hyeon and Ryu “Keria” Min-seok and DRX have one of the least experienced rosters in the LCK. The raw talent, though, makes them one of the highest variance teams in the league. If the young players blossom around Kim “Deft” Hyuk-kyu, he’s shown the ability to carry lesser players deep into the playoffs.

SANDBOX Gaming finished fifth in 2019 Spring, fourth in 2019 Summer, and have only upgraded their roster heading into 2020. Kang “GorillA” Beom-hyun should take the majority of playing time over Cho “Joker” Jae-eup and either of Han “Leo” Gyeo-re or Moon “Route” Geom-su should be an upgrade over Jang “Ghost” Yong-jun. SB even added Yoo “FATE” Su-hyeok to split time with Kim “Dove” Jae-yeon.

The problem is, SB lack the top-end talent necessary to win a title. They are consistently good, allowing them to soak up wins during the regular season as other teams experience ups and downs. But they haven’t done well in best-of-series throughout their LCK tenure, often getting exposed when teams are solely prepared for them.

How the mighty have fallen. Griffin were absolutely dominant to begin 2019 Spring, and while they couldn’t keep up that pace, they finished second in the LCK to T1 twice and made it to the quarterfinals of the World Championship. But with half of their team and coach leaving this offseason, Griffin face real uncertainty heading into 2020.

The good news is that Lee “Tarzan” Seung-yong and Park “Viper” Do-hyeon opted to stay. Those two and late addition Son “Ucal” Woo-hyeon will keep any team competitive. However, their top lane and support situations are problematic. Jeong “Irove” Sang-hyeon will have to build synergy with Viper, while Choi “Sword” Sung-won and Park “Untara” Ui-jin combine to form a bottom tier top lane.

Hanwha Life Esports were the other beneficiary of Griffin’s exodus, snapping up support Son “Lehends” Si-woo. HLE also added top laner Lee “CuVee” Seong-jin from Gen.G. CuVee has combined moments of brilliance, particularly when the games matter the most, with replacement-level play.

Otherwise, HLE is made up of a number of veteran players lacking the upside to compete with the LCK. This team looks like it was crafted more to stave off relegation than compete for an LCK title, which makes sense when you consider that HLE just played in the 2020 Spring Promotion tournament.

KT Rolster have been known as the team to get close to winning titles before falling short, but that shouldn’t be the case with this team. The team lost much of their identity this offseason and revamped their roster with a cast of average players. The losses of Bdd and Hwang “Kingen” Seong-hoon will be tough to take.

Jeon “Ray” Ji-won was a great top laner before injuries, so he will be KT’s best bet top lane. Lee “Kuro” Seo-haeng should take over the shotcalling duties after a successful year with Bilibili Gaming, but he lacks the mechanical upside of Bdd. There just isn’t a lot to get excited about with this roster.

As great as the debuts have been from young teams entering the LCK, it’s hard to see APK Prince following in those footsteps. In their first opportunity to impress, APK fell to CK team Brion Blade in the first round of qualifying. To put that in perspective, no other LCK team exited the tournament that early, while several CK teams made it to round 2.

The biggest problem for APK is that they were unable to re-sign star jungler Lee “KaKAO” Byung-kwon for the upcoming season. KaKAO helped carry APK into the LCK, but APK will now be relying on former JDG jungler. Sung “Flawless” Yeon-jun. Unless they sign KaKAO or someone of star quality late, APK are primed for a last-place finish.