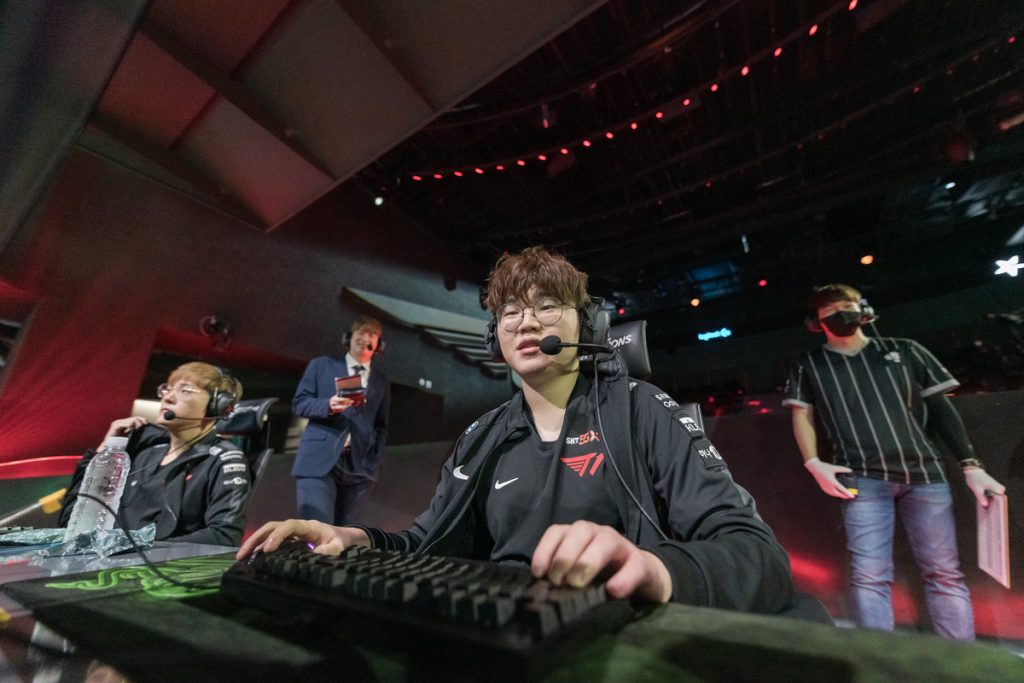 The League of Legends Champions Korea (LCK) completed their tenth and final week of the 2020 Summer Split. T1 showed just how much faith they have in their rookie mid laner when they started him against DAMWON Gaming. However, DWG still managed to take the series and clinch the first seed heading into the playoffs. We take a look at where things stand in the LCK by looking at the top storylines so far in Korea.

When mid laner Lee “Clozer” Ju-hyeon turned 17, T1 did not hesitate to play him. Not only did Clozer get his first game as a pro, he played all four games against KT Rolster and SANDBOX Gaming in week seven. Perhaps trying to ease the rookie into the scene, the rest of the roster stepped up around him to play some of their best games of the season. T1 all four games against borderline playoff teams.

It made sense for T1 to stick with Clozer in week eight. It would give Lee “Faker” Sang-hyeok more time to relax, Clozer would continue to get stage experience, the team could work on not being Faker-reliant to make plays, and the schedule was soft. SeolHaeOne Prince and Team Dynamics were already fading in the playoff race, and even if T1 dropped a game, they could always go back to Faker.

T1 did not drop a game, winning all four in week eight. With Afreeca Freecs on the schedule in week nine, T1 left Clozer in again. T1 picked up another sweep, making Clozer 10-0 as a starter. Now, with T1 still able to catch Gen.G for the third seed, they would have a decision to make in week 10. DAMWON Gaming and DRX loomed, two teams on an entirely different level from the teams T1 and Clozer had been beating on for the past five matches. How T1 handled week 10 would have a lot to say about how they feel about their mid lane.

Keeping with the momentum, T1 started Clozer in game one against DAMWON Gaming. Things didn’t go as well this time, as DWG took a dominant win. Heo “ShowMaker” Su’s Twisted Fate went 6/0/10, still making plays around the map despite Clozer’s Sylas being able to follow. DWG won the game 17 kills to 4 in 29 minutes, setting up T1’s first real mid lane decision. Would they go to Faker, or keep Clozer in for game two?

T1 opted for the latter. Clozer again played Sylas, this time into ShowMaker’s Kassadin. Clozer’s 4/3/4 score line was more impressive in game two, but the result was the same. DWG played around their top side, getting Jang “Nuguri” Ha-gwon strong on his Renekton. DWG won 14 kills to 9 in 35 minutes to complete the 2-0 sweep.

With Gen.G’s win over Afreeca Freecs later in the week, T1 were locked into the fourth seed by the time their match with DRX rolled around. T1 again started Clozer, but after they won game one, T1 brought in Faker for game two. Faker didn’t play poorly, but the team lost 17 kills to 5 to even the series at one apiece. T1 turned back to Clozer in game three and closed the series out, winning 23 kills to 6 in 39 minutes.

T1 very well could have just decided that Faker would only get game two before the DRX series started. However, T1’s signals throughout their final week of the regular season indicate that they’re getting ready to roll with Clozer in the playoffs. Faker has always been known as a team player, most famously sharing time with Lee “Easyhoon” Ji-hoon, but that was also before he was a part owner in the organization. It’s also tough to draw definitive conclusions that Clozer gives the team a better chance to win after beating up on non-playoff teams for a few weeks.

Faker has always been known as a player who peaks during the highest stakes matches and performs well under pressure. We’ll see if he gets a chance to show that ability again in 2020.

Though they entered week 10 a match behind DRX in the standings, DAMWON Gaming still controlled their destiny in the regular season standings. Their exceptional 30-5 game record was much better than DRX’s 31-11, meaning that DWG just needed to win their final two matches by any score to secure the top seed. DAMWON Gaming did that with ease, sweeping T1 and KT Rolster to improve to 16-2.

ShowMaker earned game MVP in the opener against T1, going 6/0/10 on Twisted Fate to participate in all but one of DWG’s 17 kills. Jang “Ghost” Yong-jun (4/0/7) also went deathless in game one. He followed it up by going 3/0/8 on Ziggs in game two, earning game MVP and a deathless series.

Playing against a KT Rolster team who had their playoff hopes dashed a series earlier, DWG made quick work. Game one was a 15 kill to 4 crushing in 25 minutes, highlighted by Kim “Canyon” Geon-bu’s 4/0/6 Nidalee. Somehow, game two was even faster. DWG needed only 20 minutes, barely giving KT enough time to surrender before their Nexus fell. Nuguri earned player of the game for his 6/0/3 Camilee in the 11 kill to 3 win.

Ten straight wins, second round sweeps, the maximum points equivalant record, and straight to the final stage. Our summer has come to an end with countless new histories. We will more prepare to win the finals. Thank you so much to all the fans who supported us during the season.

DAMWON Gaming have now clinched their spot in the Summer Finals. While they will face whatever strong opponent makes their way through the playoff bracket, DAMWON Gaming will be considered an overwhelming favorite. The LCK have good depth in their playoff teams, but DWG have looked like the only dominant team in the league in the Summer. DRX, Gen.G, and T1 have all had flaws exposed, but nobody in the LCK has been able to expose DWG in the second half of the season.

At the same time, DAMWON Gaming have always been capable of this performance. There were plenty of players and teams at the 2019 World Championship that said DWG were the best team by far in scrims, but DWG fell to G2 Esports in the quarterfinals. We’ll see if they can put together a great series with a title on the line.

Afreeca Freecs entered week 10 all but assured of a playoff spot. For KT Rolster to pass them, KT would have to 2-0 AF in their series, beat DAMWON Gaming, and have AF lose to Gen.G. Considering that DWG were guaranteed to be playing for seeding against KT, the scenario for KT to pass AF seemed unlikely at best. Afreeca Freecs didn’t leave anything to chance. Playing on the first day of week 10, AF beat KT Rolster 2-1 to clinch their playoff spot.

Afreeca Freecs won today's game and made it to advance playoffs!! we'll prepare harder for the upcoming games and show you a good performance. Thank you.#AFWIN #GoFreecs #AfreecaFreecs

KT Rolster played like their lives were on the line in game one, coming out with a dominant 18 kill to 4 win in 30 minutes. Song “Smeb” Kyung-ho turned back the clock, going 6/1/6 on Jayce. But when the next two games came down to late game decision making, AF showed why they are making the playoffs. They won game two in 44 minutes, while the playoff clinching game three lasted an entire 51 minutes.

Afreeca Freecs then lost 0-2 to Gen.G in their final game of the regular season, but that match meant nothing to them. They even subbed in Lee “Dread” Jin-hyeok and Son “Jelly” Ho-gyeong in game two.

Afreeca Freecs may be a distant fifth in the standings, but they open the playoffs on equal footing with their first round opponent, T1. T1 will be favored, but AF earned their shot by winning their important match in week 10.

The king of the hill style LCK Summer playoffs will begin with the “wildcard” round match between the fourth seed T1 and fifth seed Afreeca Freecs. The two teams will play a best-of-three match on Wednesday, August 26th to kick off the playoffs. The following three playoff matches will be best-of-five. Gen.G awaits the winner of AF and T1 in round two, DRX awaits the winner of round two, and DAMWON Gaming are the final boss in the Finals.