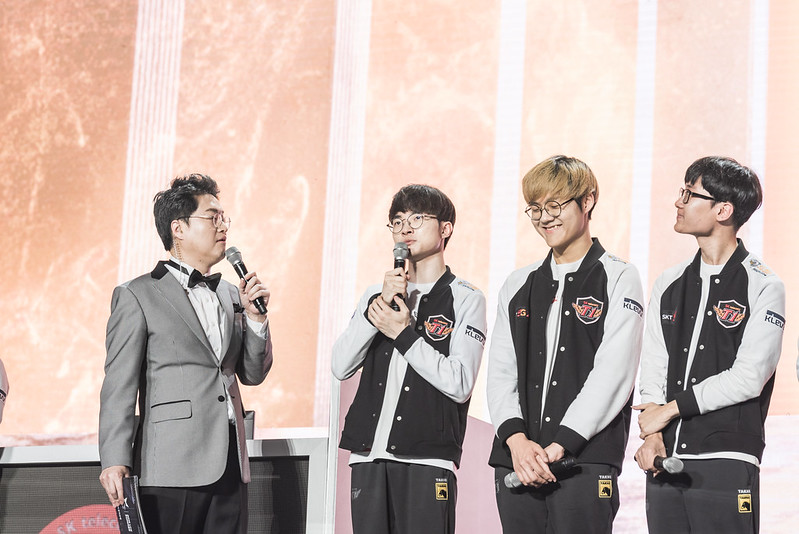 The two top teams in the 2020 LoL Champions Korea (LCK) Spring Split regular season met in the finals of the playoffs. As the top overall seed, Gen.G were automatically seeded to the finals. T1 beat DragonX 3-1 in the semifinals to set up the showdown.

Unfortunately, the series did not live up to the hype. T1 dispatched Gen.G in an anti-climatic three game sweep to claim their third consecutive LCK title. It was also the third straight championship that T1 won despite not entering the playoffs as the top seed.

T1 entered 2020 with major question marks after an exodus in the off-season. Two of their biggest stars in jungler Kim “Clid” Tae-min and Kim “Khan” Dong-ha left for new teams. Lee “Effort” Sang-ho returned, but coming off a rough postseason, his safety net Cho “Mata” Se-hyeong retired to end his legendary career. And, perhaps most importantly of all, long-time coach Kim “kkOma” Jeong-gyun left the organization he had been with since 2012.

T1’s replacements didn’t have the same pedigree, but they had talent. Moon “Cuzz” Woo-chan was already one of the LCK’s best junglers, even if he wasn’t as well known as Clid. New coach Kim “Kim” Jeong-soo was one of the most accomplished T1 could get, having guided Invictus Gaming to a World Championship in 2018. He is also highly regarded for his work with top laners, lending credence to the duo of Kim “Canna” Chang-dong and Kim “Roach” Kang-hui.

T1 carried that momentum into the playoffs. They first faced DRX in the semifinals. T1 jumped out to a quick 2-0 lead before DRX bounced back in game three. It was just a blip, though, as T1 again won game four convincingly to advance to the finals. Canna crushed Choi “Doran” Hyeon-joon all series, 16/6/23 across the four games. He was named MVP of games 2 and 4 for his efforts.

T1 then met Gen.G in the finals, facing their former jungler Clid and LCK Spring MVP Gwak “Bdd” Bo-seong. Gen.G, more than any other team in the LCK, could match T1 with firepower in every role.

T1 took a methodical win in the opening game of the finals. T1 built a long-range composition centered around Park “Teddy” Jin-seong’s Lethality Varus and Lee “Faker” Sang-hyeok’s Corki. With Cuzz getting early control of the jungle on Graves, he stopped Clid’s Rek’Sai from setting any of T1’s laners behind. Gen.G had no answer for Teddy’s poke — he dealt a game-high 41.5k damage — and T1 won 11 kills to 5 in 45 minutes.

T1 didn’t fix what wasn’t broken in game two. They picked Corki and Varus again and won again, but this time it took only 30 minutes. Gen.G were more willing to engage with their Jarvan IV and Galio combo, but they could not crack T1 in the important fight around Baron. Cuzz finished a perfect 4/0/5 on Olaf to set up match point.

Game three didn’t go any better for DRX. Canna completed a great rookie season by smashing Rascal in lane, forcing Rascal to go 1/8/2 on the lane bully Jayce. T1 won 21 kills to 7 in their fastest win (29 minutes) of the series. Teddy picked up an unofficial penta kill and finished 11/1/6 on Aphelios.

Our history continues and here’s our hero tonight.
We are proud to present the MVP of 2020 LCK Spring Finals, CUZZ!#T1WIN #T1Fighting pic.twitter.com/1J4IaGOYhN

T1 DOCKED BANS IN GAME ONE

As well as the finals went for T1, they began with controversy. T1 were required to give up two bans in game one against Gen.G for failing to show up on time. T1 CEO Joe Marsh voiced his displeasure with the ruling on Twitter before the match.

So you’re telling @T1LoL are 30 minutes late to LoL Park due to a misunderstanding and LCK takes 2 bans away from us? Way to taint a championship game. We work hard all year. Fine us, take prize money away. Don’t ruin the game. Total bullshit.

After the series, we were given clarification from the team. T1 were under the impression that they needed only one player and one coach to report, so only Coach Kim and Faker showed up at the 1:30 p.m. call time. The LCK rulebook states that a team is determined to have arrived only when they have all five starting players for game one and a coach present on site. The rest of T1’s team did not arrive until 2:48 p.m.

.@T1LoL's head coach Kim: "There was a bit of a misunderstanding. All of us were planning to be there by 1:30 PM. However, our company told us that just Faker and I were required to arrive at that time. So when we arrived, I didn't realize that such a rule existed."

Realistically, docking bans on the first rotation should not be a huge disadvantage to any good team. Assuming those would be used on standard meta bans, all it would do is allow more power picks to come through in the draft. A problem would only arise if T1 needed to ban out specific champions from Gen.G, be it pocket picks or meta picks that their players are unable to play. But with a team as talented as T1, they can leave open the power picks and just draft around them on blue side.

Assuming T1 used the same bans in game two that they would have used in game one, they missed out on Elise and Kalista bans. Interestingly, neither of those champions were picked or banned at all in game one. T1 banned Sett all three games.

Gen.G did not stand pat after they missed the playoffs in both splits last year. They re-tooled their top half of the map by adding Kim “Rascal” Kwang-hee, Clid, and Bdd to an already potent bot lane with Park “Ruler” Jae-hyuk.

Ending 2020 LCK Spring Split in 2nd place!
Spring journey ends here but this will be a stepping stone for the summer. Thank you fans for your utmost support during this ride. #GenG #WeAreGenG #TigerNation https://t.co/AP7ZKqpPAJ

They finished with the best regular season record in the LCK, but their form fell off in the second half of the split. Instead of the expected improvement of a rebuilt roster throughout the season, Gen.G lost three of their final six matches. Still, their regular season was good enough to advance them directly to the finals.

The last team Gen.G wanted to see as their opponent was T1. Gen.G was 14-2 against the rest of the league in the regular season, but went 0-2 against T1. They did play close 2-1 matches in both, but T1 were ultimately the better team.

This series was not as close. The development of Canna and the strong form of Cuzz cut down on what was previously thought to be a Gen.G advantage on the top half of the map. Add in MVP Bdd being a non-factor on two games of Zilean, and Gen.G were not the strongest version of themselves.

That included their drafts in the series. T1 played similar compositions in the three games, but Gen.G had no answer for it. T1 wanted to play a ranged game against Gen.G, who tried to counter it with hard engage. But the problem was that T1 still played better scaling compositions. So Gen.G had to force fights early into T1’s poke, but that’s easier said than done.

Though they lost, Gen.G still have a bright future. They were definitely the best team in the LCK prior to the coronavirus hiatus and should continue to build synergy heading into their second full split together.

The LCK will resume with the Summer Split regular season. The first match is scheduled for Wednesday, June 17th.