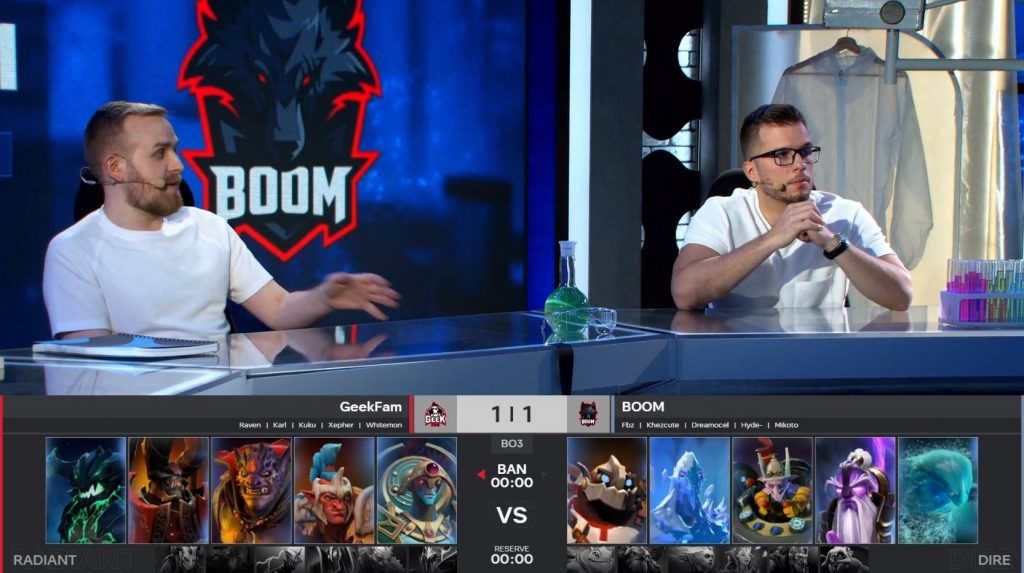 Great games, coronavirus news, and hygiene tips were the order of the day for the first day of WeSave! Charity Play. (Photo courtesy WePlay!)

With COVID-19 causing havoc across the globe, WePlay! Esports has stepped up with the WeSave! Charity Play event, which began today. Pitting 24 international Dota 2 teams in a regional battle for supremacy, Friday we saw our first three matchups of this charitable event.

What’s more, this would be the first tournament played on the recently released 7.25 patch, which had a number of effects on competitive play. On top of hero balances, the patch made a change to Captain’s Mode, so the ban counts per phase are now 4/1/1, rather than 3/2/1. This means teams must put a greater emphasis on banning out entire compositions early, and affected the way stacks drafted today.

After a brief delay to the start of the action, the event kicked off with some pre-show entertainment as a string quartet serenaded viewers with classical music.

Guys, we ask you to remain calm😅

We are making slight changes in the schedule!

We also got our first look at WePlay!’s unique production for this event: A laboratory theme filled with toxic warning signs, and casters and talent dressed in sterile all-white outfits. This fitting, if not slightly on-the-nose set design was accompanied by a multitude of coronavirus-conscious elements. In between games there were statistics, news about the spread of COVID-19, advice for washing hands, and highlights about the more uplifting stories about the virus. Combined with WePlay!’s now expected high-quality SFM videos, this was one fantastic production.

But besides all that was the reveal of a further “stretch goal” for the event. If the initial prize-pool amount of $120,000 could be increased to $150,000 by the final day, we’d see an additional CIS vs. Europe’ ‘Grand Final’ to conclude the tournament. With that in mind, it was time for the games.

Our first matchup of the day featured two up-and-coming talents of the SEA region, who’ve both made a limited but impressive impact on the Dota Pro Circuit scene. Following a cautious draft, the changes for the 7.25 patch were immediately felt, as Geek Fam scored two quick kills. With the increased cost of teleport scrolls, BOOM’s heroes had a long walk of shame back to lane, something we’d see a lot of in today’s games. However, despite Geek Fam’s better rotation, a small lead started to develop on the hard farming BOOM carries.

But BOOM wasted cooldowns on bad fights, which lead to a massive swing for Geek Fam. As a result, they could catch out their opponents and kill them for free.

By 20 minutes, Geek Fam was ready to pushing tier-two towers and killing the opponent’s Lion on cooldown. They ended the first match just a few minutes later.

After a brief coronavirus update, the teams headed into a second draft where BOOM retained the Ember Spirit and capped off their composition with a Bounty hunter. But as we got into the game, things immediately went wrong for BOOM. Their Nyx Assassin gave up a free kill, and minutes later, disconnected. This led to the revelation that due to connection issues, BOOM Esports were playing with their manager in the five position. It looked like a doomed game for the team.

Even with this handicap, the farm that Boom was able to get on Bounty Hunter started to put him in a much better situation. At around 25 minutes, another pause hit the game, but this time BOOM came back swinging. After a decisive series of catches in their opponent’s jungle, BOOM grabbed Roshan at 32 mins and pushed down the high ground for the win.

By game three, Geek Fam had regrouped and drafted a far more convincing team composition. Combining the super scaling of the Troll Warlord with the catch of the Lion, Geek Fam bullied BOOM Esports across the map. After a noble attempt to remain in the tournament, BOOM Esports found themselves the first team eliminated from this event.

Natus Vincere vs. B8

Heading into WeSave! this CIS matchup was definitely one fans were excited for. Watching Dendi face off against old team Natus Vincere was something too good to miss. But B8 was facing a fully-realized version of Na’Vi. Now recovered from their roster controversy, and with a motivated, just-signed Semion “CemaTheSlayer” Krivulya, the team was very dangerous.

Almost immediately, though, Na’Vi was backed into a corner by B8. Danil “Dendi” Ishutin bullied his opponent on a Lina pick that would have been mediocre in almost anyone else’s hands. In the side lanes, their opponents gave up kills and towers, before finally regrouping. At around 30 minutes, Na’Vi started to show signs of life. By farming and giving up what they could, the team had bought time for their carries. In a heartbreaking finish to the match, a few decisive fights demolished B8’s entire lead, leaving them to give up game one in a frustrating fashion.

Unfortunately for B8, things would get much better in game two. After a promising draft that saw the team pick up some of the highest priority heroes in the new patch, such as Snapfire and Ember Spirit, B8 only just held on during the laning phase. With Pavel “9pasha” Khvastunov’s Void Spirit 1v2ing in the bot lane, Ember Spirit and Snapfire could build up a decent lead, but it was all for naught. Nyx Assassin has already proved to be one of the most potent support picks of the tournament, and in Cema’s hands, it was even more so, with the four-position player grabbing catches for his carries all over the map. By focusing mid for his ganks, he scaled his carries while suppressing Dendi. As a result, B8 crash out of the tournament in disappointing fashion after a much-hyped matchup.

After a massively disappointing showing at DOTA Summit 12, Cloud 9 entered this tournament with a chip on their shoulder. Far from just a charity event, this was a chance for the NA team to prove they could not only hang with top-level Dota teams but even win matches.

In game one, it looked like C9 had learned an enormous amount in just ten or so days since their unceremonious departure from Summit. Their better rotations and deadly efficiency were clearly on display. What’s more, CR4ZY was not exactly the international powerhouses that C9 had faced at Summit. The team made plenty of mistakes and failed to punish Jingjun “Sneyking” Wu for overextending on Centaur Warrunner. Regardless, this stack was able to pick up their first competitive win under the C9 mantle in this game.

The team attempted to replicate this for game two. Once again, their superior map rotations and early kills for Sneyking’s Centaur Warrunner put them in a dominant initial position. However, CR4ZY attempted to take back control of the game with a number of picks. By smoking and preventing their opponents from taking towers, the team was able to slowly gain control. Because they’d not given up too many kills in the early game, Nyx Assassin was able to create so many kills across the match, making up for the slightly underwhelming Ursa pick. After ten minutes of back and forth fighting, C9 was massively on the back foot, and after picking up, an Aegis CR4ZY could wrap up the game.

For the decider, Cloud9 went for the powerful Death Prophet pick, which had drawn bans from multiple teams in the first two matchups. This hero has been super strong, even before the patch, but in 7.25, it’s come into its own. They rounded out the draft with a Bounty Hunter that was surely set for the hands of soft support Rasmus “MISERY” Filipsen.

But as we loaded into the game, it was shocking to find the Bounty Hunter having gone mid, versus the Bloodseeker for CR4ZY. These two unorthodox middle heroes facilitated a very bloody set of side lanes, with plenty of traded kills. Eventually, CR4ZY built up a strong lead, and with their better composition of Shadow Demon, Bloodseeker, and Wraith King, and finished off the game but just out scaling and killing C9 wherever they found them. They wrapped up the series with a convincing final victory.

Although this event is for charity, and all in good fun, Friday’s games were very super high-quality. Teams were treating this with the same respect they would a DPC event, rather than with a more light-hearted approach as they did at Summit. With this being likely the only significant international Dota even in some time, it was comforting to find this was the case.

WeSave! Charity Play has been a well-meaning, if not confusing, production so far. The tone is sometimes a little off, with humor and serious advice about the COVID-19 pandemic bunched too close together. Dota, as an esport, has fully embraced a light-hearted tone in its presentation compared to most of its contemporaries. So when no-nonsense advice about handwashing and isolation are offered next to in-jokes and memes, it becomes a little hard to take seriously. That said, it’s impossible to be too critical about an event that has committed to raising and donating $150,000 to fight coronavirus, something other tournaments should definitely replicate.