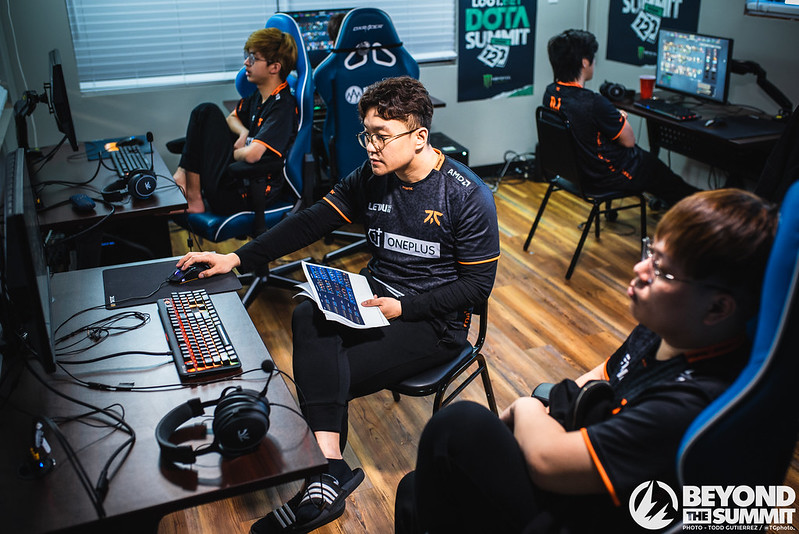 The brief group stage is complete and Summit 12 will soon head into playoffs. (Photo courtesy Beyond the Summit)

With the conclusion of group stage play at the LOOT.BET Dota Summit 12, it’s time to take a look at how our six team stacked up.

After their strong start on day one of group play, Fnatic faced three best of twos with a playoff berth all but secured. The South East Asian juggernauts continued their strong performance at the event by splitting series’ with OG.Seed, Thunder Predator and Evil Geniuses. Going 3-3 on the day, Fnatic showed some signs of weakness and a bit of their hot and cold tendencies of events past. After a coinflip versus OG.Seed (also 7-3) however, Fnatic were dubbed the number one seed and chose to play the second match of Summit bracket play against Team Liquid.

OG.Seed continued their impressive performance, starting the day with a split series against Fnatic. They looked impressively dominant in game one of the series before getting steamrolled in game two. OG.Seed were clearly unphased by the loss, however, as they rebounded to annihilate Cloud9 in two of the most one-sided games of the event. OG’s academy squad has shown amazing growth since their run in the qualifiers and could even challenge for a top three spot after taking games off of Fnatic, Liquid and Evil Geniuses.

Evil Geniuses showed up on day two looking like one of the clear favorites to win the event, and then promptly got 2-0’d by Team Liquid. Even pulling out the Abed Meepo in game one was not enough to carry EG and the team suddenly found themselves in a fight for their playoff lives. Thankfully for Evil Geniuses fans, facing the struggling Cloud9 team next provided a much needed boost in the right direction. Finishing up the day with a series against Fnatic  and the potential of a three way tie, left Evil Geniuses with their destiny in hand. After dropping game one, EG pulled together a dominant game two, giving them six points and avoiding tie-breakers.

Sporting just two points after day one of play, Team Liquid looked out of practice and sloppy. It was a different team that took to the keys on day two though as they began the day with a resounding 2-0 over Evil Geniuses. The Liquid boys continued to frequent the casting couch during their break and provided an invaluable level of insight to the viewers. It was back to business however in their second series as they decisively beat Thunder Predator in game one to keep their playoff hopes alive. Game two however was a similarly decisive loss to the Peruvian upstarts and left Liquid’s tournament life hanging in the balance. Thanks to EG’s 1-1 split with Fnatic, Team Liquid found themselves in a best of one against Thunder Predator again for the final playoff berth. Taking a chance by going all in on the late game against an aggressive opponent, Liquid were able to outlast a terrible early game to hit their game winning timing and advance.

Thunder Predator continued to impress on day two of the Summit group stage. After splitting their first series of the day against Fnatic it looked like the Peruvian squad would knock Team Liquid out of the playoffs. Thunder Predator dropped game one of the series against Liquid but recovered in game two to pull even in the standings again. Though they were ousted in the tie-breaker there were a lot of great moments for a team that most people expected to get last place. Thunder Predator showed time and again that they have the capability to take games off of anyone. Their ability to snowball early aggression clearly took some of the more seasoned teams off guard and so it will be exciting to watch whether this team can continue their run in the South American region.

Cloud9 were mostly playing for pride on day two of the LOOT.BET Summit 12. After failing to win a game on day one, the newly renovated roster tried some new things and some old classic hero/player combinations. Though they started off the day in a hard fought loss to Evil Geniuses, it was all downhill from there. By the end of the final series with OG.Seed it was pretty clear that Cloud9 were feeling ready to go home to regroup.

Cloud9 fans should pump the brakes a bit on the panic though, keeping in mind that this team did just come together. The roster remains full of potential if they can find their identity and shake off this demoralizing first showing.

The four team playoffs begin Thursday, March 12th at 9 a.m. PST on Beyond the Summit.